Expanding bilateral air services agreements to boost tourism, business and GDP – as Japan is doing – is not a new strategy; yet many states still persist in determining market access around the interests of flag carriers. Japan's recent revision of its agreement with the United Arab Emirates, and forthcoming revision with Qatar, contrasts with the regulatory approach of several states (including the Japan of merely a couple of years ago) and reflects on Japan's recent wave of liberalisation to boost visitors to the country. This is part of an effort to stem a declining economy and population – an effort that has most prominently manifested itself in the country opening the door to a flurry of low-cost carriers this year.

While bilateral air services agreements are classically (and archaically) based on reciprocity of airline interests – so that inertia is the dominant force – with Japan and the UAE and Qatar, Japan is doing all of the "giving" and none of the taking; its carriers do not serve and have no intention to serve the Middle East.

Superficially this makes the bilateral revision unnecessary, yet it vividly illustrates Japan's new regulatory attitude to placing the country's interests ahead of its local carriers.

Passengers travelling between Japan and the UAE: 2009 to 2011 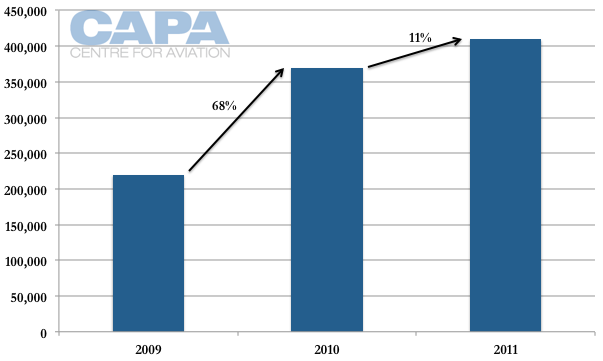 Under the new bilateral agreement, UAE carriers will be able to serve Abu Dhabi-Tokyo Narita and Dubai-Tokyo Narita 14 times weekly for each pairing, a doubling from the previous limit of seven weekly services. Traffic rights to Tokyo's convenient downtown airport, Tokyo Haneda, have also been introduced, with both Dubai and Abu Dhabi allowed seven weekly services from each city to Haneda.

The revision is not sweeping: it is not open skies, changes do not take effect until northern summer 2013 and Haneda access is restricted to late night/early morning slots, as is the case for international carriers – and which is unlikely to change prior to 2013/14 when Haneda will see an additional 30,000 annual slots.

In the UAE, Emirates and Etihad make good use of their Tokyo capacity, with Emirates operating a daily Boeing 777-300ER service from Dubai, and Etihad a five times weekly A330-200 service. Emirates is well positioned to bring its schedule to a double daily service while Etihad could look to boost its frequency, although it has large global route ambitions and a long-haul fleet that will not significantly grow until the medium term. Etihad is progressively bringing its services to daily frequencies; at the end of 2010, 90% of services were daily and not constrained by bilateral limits.

Etihad also serves Nagoya five times weekly via Beijing with an A330-200 while Emirates has a daily 777-300ER service to Osaka Kansai. All Nippon Airways (ANA) and Japan Airlines (JAL) do not serve any points in the Middle East, but JAL has a partnership with Emirates and ANA with Etihad. JAL has expressed interest to CAPA in having a greater presence in the Middle East but does not intend to launch its own services. JAL's oneworld partner Royal Jordanian – the alliance's sole Middle East carrier, for now – does not serve Japan.

Qatar-Japan access will also expand, helping Japan reach countries its airlines do not fly to

Passengers travelling between Japan and Qatar: 2009 to 2011 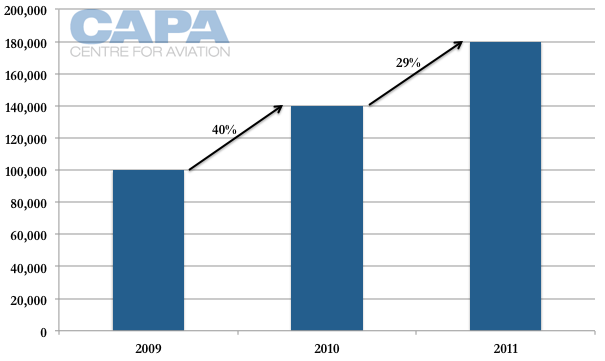 The Middle East network carriers are helping to link Japan to markets its airlines do not serve. Japan recorded a 26.8% year-on-year increase in visitor arrivals in 2010, the last normal year before the Mar-2011 earthquake and tsunami saw passenger numbers significantly drop. The growth was largely concentrated in Asia, which increased 35.6% and is a market where the Middle East network carriers have little influence.

Yet other regions show the potential for the likes of Emirates, Etihad and Qatar to help grow traffic. African passport holders arriving in Japan increased 9.9% year-on-year in 2010 despite no African or Japanese carriers serving Africa; the market is dependent on transfer traffic and even Asian airlines serving Africa are few.

European passport holder inbound travel increased 6.6%, and while very solid growth was recorded in countries that are directly linked to Japan – 6.9% in France, 12.3% in Germany and 12.6% in Switzerland – there was also large growth to/from countries not linked to Japan: 21.9% in Portugal, 15.0% in Belgium, 10.6% in Sweden. Middle East network carrier penetration in those countries is not deep, but they need only a few seats from each corner of their spheres to fill a flight. Countries where the Gulf carriers are more prominent also saw growth.

Spain ranks in the top 20 destinations for Japanese overseas travellers despite there being no direct flights between the two countries while another high ranker, Italy, has seen JAL suspend its services as part of its restructure, leaving only Alitalia to serve the market. Alitalia's current seat offering can only accommodate 80% of Japanese visitors to Italy in 2009, the last full year before JAL ended services, and this of course makes no provision for foreign visitors to Japan.

Brazilian passport holders visiting Japan increased 26.6% year-on-year in 2010 despite JAL ending its sole service, to Sao Paulo (with its massive Japanese heritage) via New York, in Sep-2010. Oct-2010 saw year-on-year growth of 16.0% while Nov-2010 declined 5.2% and Dec-2010 shot up 47.7%. While JAL signed a codeshare with American Airlines covering New York-Sao Paulo, no doubt traffic found other avenues – including on the Middle East carriers, who have since increased their South American coverage.

The beauty of network access – connecting with the world

And that is the beauty of these carriers Japan is welcoming: they can turn weaknesses or absences into filled seats, with all the ensuing economic benefits to flow – if countries are willing to unfurl the welcome mat. JAL's post-bankruptcy reduction in marginal long-haul services has helped open this door no doubt. But the dividends to Japanese tourism and travel are near-boundless, once the vast array of global one-stops makes almost any large city in the world available daily one stop. The impact on tourism and travel is near-miraculous. Mere double-digit growth becomes commonplace.