Turkish Airlines (THY) is pursuing aggressive expansion in Latin America, where it plans to triple the size of its network in 2014 to six destinations. THY will still be a relatively small player in the Latin America-Europe market but its launch of services to Bogota, Caracas, Havana and Mexico City is primarily targeted at the faster-growing and under-served Latin America-Asia market.

THY will offer the Colombian, Cuban, Mexican and Venezuelan markets the fastest connections to the Middle East, most of Asia and parts of Africa. With the expansion the Star Alliance carrier emerges as an attractive partner to Latin American carriers, which have a very limited presence in any of these regions.

THY is also accelerating expansion in the US market, where it plans to grow its network from five to eight destinations next summer. The carrier will open up new connections to parts of Asia, the Middle East and Africa from Atlanta, Boston and San Francisco. But the THY product from these new destinations will not be as exclusive as is the case with its new Latin American cities.

Sao Paulo was launched in 2009, initially via Dakar in Senegal and upgraded to non-stop in 2010. The tag to Buenos Aires as added in Dec-2012.

THY’s approximately 2,700 weekly seats to/from Latin America is minuscule compared to other European carriers. It is currently the 26th largest carrier between Europe and Latin America, according to CAPA and Innovata data.

Even after the launch of Caracas, Bogota, Havana and Mexico City, THY will only move up to 17th place in the Europe-Latin America market. Its planned 8,000 seats to/from Latin America in summer 2014 will still be smaller than 10 European carriers – Air France, Iberia, KLM, TAP Portugal, Air Europa, Lufthansa, British Airways, Virgin Atlantic, Alitalia and Corsair. 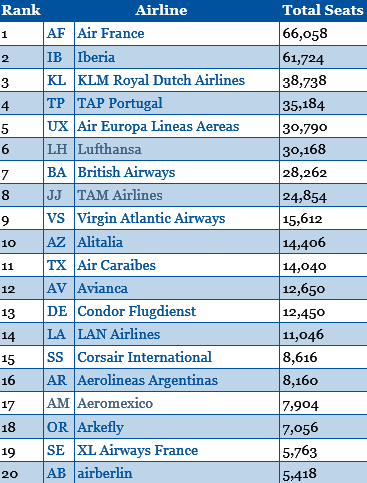 But THY has a much different product proposition in the Latin America market from its European peers. As the carrier’s Istanbul hub is at the eastern edge of Europe, THY focuses on offering Latin American passengers connections to Africa, Asia and parts of Eastern Europe.

Turkish Airlines CEO Temel Kotil recently told CAPA that its Latin America passengers accept longer “detour routes” than in other markets. He says backtracking by two hours is common for passengers coming from Sao Paulo and Buenos Aires with connections to the Ukraine, Russia and even some parts of Italy particularly popular. He expects Turkish’s new Latin American destinations to have similar success in drawing a wide swath of connecting passengers.

THY has a particularly strong network in CIS and Central Asian countries, where it has over 30 destinations. This is a rapidly growing and under-served region in which there is limited competition. Demand for service between cities such as Almaty or Kiev to Sao Paulo or Houston is growing rapidly across both economy and business class.

THY also serves eight destinations in South Asia, seven in Northeast Asia and five in Southeast Asia, according to Innovata data. It is actively growing all of these networks, which opens up even more city pairs in the fast-growing Latin America-Asia market. It also has over 30 destinations in Africa, including over 10 in North Africa that can be served from Latin America without significant backtracking.

In connecting Latin America to most of these markets, THY competes mainly with the Gulf carriers rather than European carriers. Emirates and Qatar Airways have particularly recognised the opportunities in the Latin America-Asia market, providing connections that Asian, Europe or Latin American carriers simply cannot match.

Trade between Latin America and Asia is growing rapidly and the Gulf carriers along with THY are uniquely positioned to cash in on this growth. With its forthcoming expansion in Latin America, THY is trying to get one step ahead of its rivals in the Middle East, opening up dozens of high-yielding city pairs that even Emirates does not offer – at least for now.

Emirates, Etihad and Qatar Airways already serve Sao Paulo, although THY was relatively early in entering the market as only Emirates came earlier (in 2007) while Qatar entered in 2010 and Etihad in Jun-2013. Emirates and Qatar also serve Buenos Aires but there are no Gulf carriers currently serving Bogota, Caracas, Havana or Mexico City. (Emirates, however, serves Rio de Janeiro and has been looking at other potential Latin American destinations including Mexico City and Bogota.)

All four new Latin American destinations will be initially served with four weekly flights starting in Jun-2014 or Jul-2014. Bogota will be served via Caracas and Mexico City via Havana because of restrictions at Bogota and Mexico City, where the high altitude makes non-stop flights to Istanbul impractical. But Mr Kotil is also convinced that Caracas and Havana are good markets on their own right.

THY will open up important connections between Venezuela and the Middle East and Asia. The carrier will also likely carry a fair amount of traffic to Moscow, which is currently not served from Caracas with non-stop flights.

Moscow will also feature prominently from Havana. Aeroflot serves Havana but is the only carrier in the Havana-Moscow market with five weekly flights, according to Innovata data.

Aeroflot is one of seven European carriers serving Havana along with Air Italy, Air Europa, Air France, Condor, KLM and Virgin Atlantic. But again THY, with its more eastern-focused hub, will significantly improve connections in the Middle East and Asia.

Mexico City and Bogota are the second and third biggest airports in Latin America, smaller than only Sao Paulo Guarulhos. But neither is well connected to Asia and the Middle East. For each airport Europe accounts for 12% to 13% of international capacity and most of that capacity is to Spain, where there are no connections to Asia.

Aeromexico is the only Latin American carrier currently serving Asia. Aeromexico currently operates two weekly flights to Shanghai and three weekly flights to Tokyo Narita and is looking to expand in Asia using its new fleet of 787s, which open up the possibility of non-stop flights to Asia from Mexico City which are not possible with its existing 767s and 777s due to the city’s high altitude.

But while Aeromexico could have success in growing traffic from Mexico to Northeast Asia, Turkish will offer better connections from Mexico to Southeast Asia, Central Asia and South Asia. Aeromexico also has a relatively limited network in Latin America, making it challenging for the carrier to compete with Gulf carriers and THY in the South America-Asia market.

Mexico City-Havana and Bogota-Caracas are also lucrative markets in their own rights which THY will be able to tap into if it secures fifth freedom or pick-up rights. Both routes are capped by bilateral agreements which have led to an under-supply of capacity, particularly on Bogota-Caracas.

Bogota-Caracas is served by Avianca, Copa Colombia, Conviasa and TAME. Ecuador-based TAME cited high fares and pent-up demand for the two hour route in deciding to extend its Quito-Bogota flight to Caracas service in 2012.

Even with tags for its two Latin American routes, THY will need partners in the region to help sustain the new flights. THY currently has over 30 codeshare partners but none from Latin America.

THY signed a codeshare partnership with Brazil’s TAM at the end of 2011 but Mr Kotil says the two carriers have already stopped working together. TAM is now in the process of leaving Star for oneworld.

As a member of Star, Avianca would be the most logical Latin American partner for THY – and its main hub is in Bogota. Avianca would be able to feed THY at Bogota from several offline markets throughout Latin America. Avianca also has a sister carrier, Avianca Brazil, that is based on Sao Paulo and would be able to provide THY with feed from several domestic destinations in Brazil.

Mr Kotil says Turkish is talking to Avianca as well as other Latin American carriers.

An Avianca-THY partnership also makes sense for Avianca. Latin America’s second largest airline group has been looking at expanding its international network virtually as it is for now focused on only operating with its own aircraft within the Americas and to Spain. THY would give the group in one swoop access to potentially over 100 new markets.

Serving a Latin American hub such as Bogota is particularly important for THY as the carrier does not serve Miami. Several European carriers serve Latin America by relying on connections via Miami, which has non-stop links to over 60 destinations in Latin America.

THY served Miami several years ago and has been looking at resuming the Istanbul-Miami route. But Mr Kotil says while Miami is in its network plan for the medium to long term THY is focused on first adding Atlanta, Boston and San Francisco. All three routes are expected to be launched in Jun/Jul-2014 as is the case with Bogota, Caracas, Havana and Mexico City.

THY also has identified Montreal as a second destination in Canada but this is subject to a breakthrough in the Canada-Turkey bilateral. Canada is notoriously defensive in its relations with the Gulf airlines and THY falls into the same threatening sixth freedom category. The carrier currently serves Toronto with five weekly flights. Houston, which was launched in Apr-2013 with four weekly flights and is increasing to six frequencies in Jul-2013, is the only other THY destination in North America that is not served at least once per day. 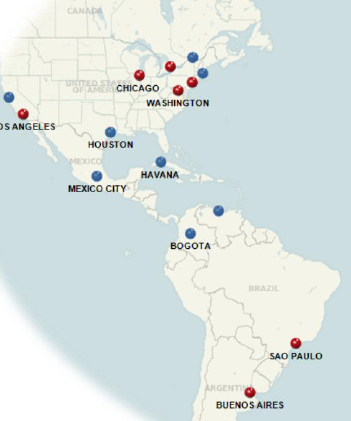 Atlanta is the main hub for Delta but is currently not served by any Gulf carrier. While Delta serves Asia from Atlanta, it does not serve the Middle East or the Central Asia/CIS region from Atlanta except for Dubai. THY looks to leverage this void as Atlanta is a major source and destination for business passengers. (Delta also serves Moscow, Tel Aviv and Istanbul but only from New York.)

Istanbul-Tel Aviv is THY’s largest route, according to CAPA and Innovata data. THY currently has more than five daily flights on the route.

Tel Aviv and New York, which is served three times per day in summer and twice year-round, are the only top 10 routes outside Europe. Moscow, another important connection market, is THY's seventh largest route based on capacity. 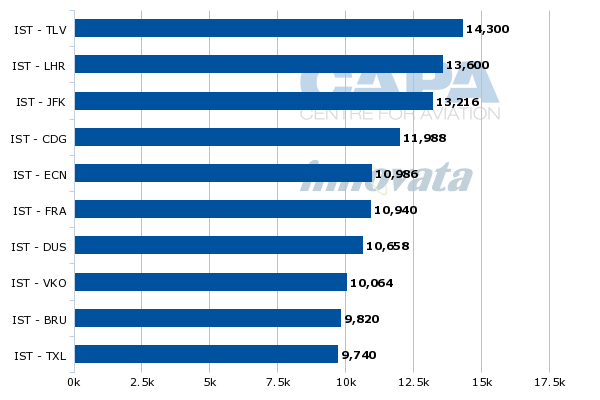 THY has a huge European network that consists of over 90 international destinations. It has been able to successfully add dozens of secondary cities in Europe as it is able to reach the entire continent with narrowbody aircraft. THY over the last two years also has been using narrowbody aircraft to rapidly expand its network in Africa.

THY is now starting to turn its attention to opening more long-haul routes as it takes more widebody aircraft. The carrier currently operates only 40 widebody passenger aircraft compared to 151 narrowbodies, according to the CAPA Fleet Database. But its fleet plan calls for adding 34 widebodies over the next 30 months for a total of 74 aircraft by the end of 2015 while growing the narrowbody fleet by 38 aircraft for a total of 189.

THY uses its A330s mainly on routes to East Asia, where it also plans ambitious expansion including extending one of its Southeast Asian flights to Australia in 2014. Mr Kotil says most likely THY will serve Sydney from Bangkok. Australia is currently the only continent not served by the carrier.

THY’s rapid ascent to become one of the world’s largest international carriers is entering a new chapter as it accelerates expansion in the Americas as well as opens new long-haul markets in Asia-Pacific. The carrier has long talked about a much bigger network in both the US and Latin America. Adding three US destinations and four Latin American destinations in a single year may seem like a challenge. But THY has the network and the global brand to make it work – particularly if it also prompts the establishment of a strong local partner like Avianca in Latin America.