Ryanair expanding presence in Germany through Dortmund and Nuremberg

Ryanair is planning to expand its presence in Germany through the launch of operations at Dortmund and Nuremberg in Mar-2013 and Apr-2013.

Ryanair’s entry into Nuremberg will again give the airport a significant LCC presence while strengthening its western European connections with six new routes. Meanwhile, Lufthansa’s transfer of some European services to Germanwings in 2013 will see Ryanair face more intense competition across its German network.

In Oct-2012, Ryanair announced plans to launch services to Dortmund Airport and said six new routes will deliver over 200,000 passengers annually at the airport. Ryanair plans to initially operate 14 weekly frequencies at Dortmund, which it estimates will support 200 on-site jobs at the airport.

This was followed one month later with Ryanair’s Nuremberg announcement. Europe’s largest low-cost carrier said it expects the 20 weekly frequencies it will initially operate on six routes from Nuremberg will deliver up to 280,000 passengers to the airport annually and sustain over 280 on-site jobs.

Ryanair’s entry into Nuremberg will see the LCC market in Nuremberg significantly expand once again, especially after airberlin’s transformation from an LCC to a hybrid/full service airline.

This resulted in Nuremberg’s LCC market share significantly decreasing as airberlin is by far the largest carrier at Nuremberg.

Currently there are no LCCs operating in Nuremberg but other budget carriers including Spain’s Vueling will return in summer 2013. Ryanair’s entry into Dortmund will not have as big of an impact considering the LCC capacity share at the airport is already almost 98%.

Ryanair’s entry into Nuremberg will also see international traffic significantly rise at Nuremberg, and the proportion of international/Schengen traffic versus domestic should increase to become the largest source of traffic. Domestic routes currently account for around 54% of the airport’s overall capacity, according to Innovata data. It is a different story at Dortmund Airport, where domestic traffic accounts for only approximately 17% of total capacity.

Dortmund is dominated by Wizz Air

Central European LCC Wizz Air is currently the leading carrier in Dortmund, accounting for around 56% of system capacity, followed by Germanwings with just over 19%. When combining Wizz Air and Wizz Air Ukraine’s contribution to capacity, the Wizz Air group provides almost 65% of system capacity at the airport.

Ryanair’s entry should see it become the third largest carrier at the airport based on the capacity contributed with 14 weekly frequencies operated with 189-seat 737-800 aircraft (5,292 seats per week). 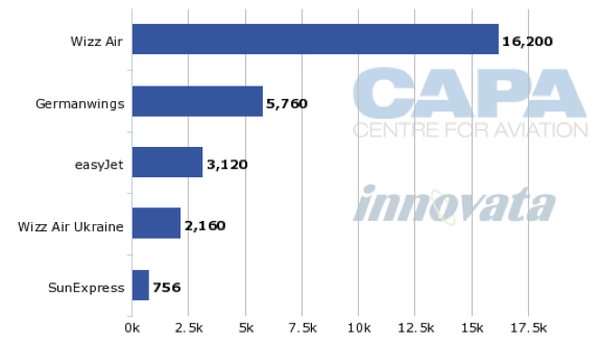 Wizz Air’s 14 routes at Dortmund are all to eastern European destinations in Bulgaria, Hungary, Lithuania, Macedonia, Poland, Romania and Serbia. As a result, the two carriers will not overlap at Dortmund unless Ryanair or Wizz Air later decide to respectively expand into eastern or western Europe.

In Nuremberg, the airline listing is quite different with airberlin currently the leading carrier, contributing around 54% of system capacity, followed by Lufthansa with around 27%. Ryanair’s entry should see it become the third largest carrier at the airport based on capacity contributed with 20 weekly frequencies operated with 737-800 aircraft (7,560 seats per week). 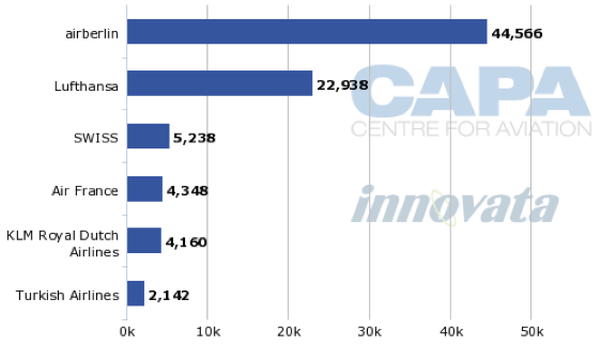 Ryanair will have additional low-cost competition in Nuremberg in Mar-2013, when Lufthansa transfers Hamburg-Nuremberg service to its low-cost subsidiary Germanwings. Other upcoming new routes from Nuremberg include airberlin’s weekly Nuremberg-Kos service, to be launched on 15-May-2013, and Astra Airlines’ Thessaloniki-Nuremberg service, to be launched on 27-May-2013. Vueling also plans to increase Barcelona-Nuremberg frequency from three to four times weekly on 01-Apr-2013.

Dortmund Airport is located only approximately 70km from Dusseldorf International Airport and 100km from Cologne/Bonn Airport. Both these airports have much more traffic than Dortmund, which reported 1.8 million passengers in 2011 compared to Cologne/Bonn’s 9.6 million and Dusseldorf’s 20.3 million. Cologne/Bonn and Dusseldorf are served by a larger group of full-service and low-cost carriers.

The Lufthansa Group has a strong presence in both Dusseldorf and Cologne/Bonn, where the Group's airlines account for over 60% of seating capacity, according to Innovata. This explains the absence of Lufthansa and the small operation by Germanwings at nearby Dortmund.

Germanwings is the largest carrier at Cologne/Bonn with a 40% share of capacity, followed by its parent Lufthansa with a 23% share. Ryanair also has a small presence at the airport, operating just two routes – Palma de Mallorca and Girona (which it will also offer from Dortmund) and accounting for less than 2% of capacity.

At Dusseldorf, Lufthansa is the largest carrier with a 38% share of capacity, followed by Germanwings with 27%, according to Innovata data.  Ryanair does not currently serve Dusseldorf.

Ryanair is expanding elsewhere in Germany

Ryanair already operates a significant German network and is currently the fourth largest carrier overall in the market, accounting for about 3.5% of total capacity in the country. The airline is also currently the largest foreign carrier operating in the country (based on seats per week).

Ryanair’s launch of operations at Dortmund and Nuremberg will not affect its ranking in the German market to a great extent, as Germanwings’ operation also stands to increase in 2013 with the transfer of services from Lufthansa.

But Ryanair’s expansion should increase the lead Ryanair has on easyJet, which is currently ranked at fourth place for seats per week in the German market. 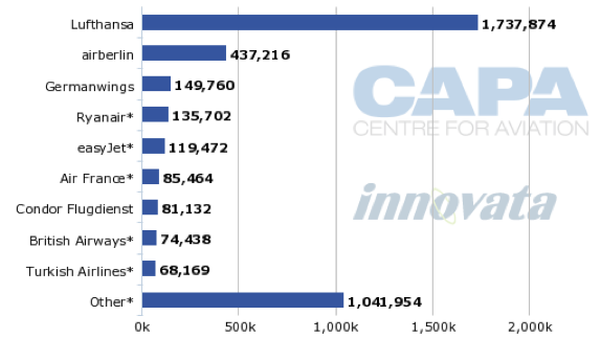 In addition to Dortmund and Nuremberg, Ryanair also recently announced plans to expand its Cologne network. Ryanair will launch two new services to Faro and Malaga on 01-Apr-2013 while it will increase Cologne-Girona frequency from six times weekly to daily and Cologne-Palma de Mallorca from daily to nine times weekly.

Overall Ryanair will operate 24 times weekly to four destinations from Cologne over summer 2013. Ryanair expects to carry 350,000 passengers to/from Cologne in 2013. It has also been reported Ryanair plans to begin basing aircraft at Cologne/Bonn Airport.

The Lufthansa Group fights back as LCC competition mounts

Lufthansa’s transfer of European services outside of its Frankfurt and Munich hubs in 2013 to Germanwings will see the Lufthansa Group more aggressively compete with low-cost carriers within Germany and in Europe.

The shift reflects Germanwings’ ability to operate point-to-point services off a lower cost base than Lufthansa.

As Germanwings takes over more Lufthansa services, Ryanair will face more intense competition from Germany’s largest LCC. But the net result is to lower yields in what is already becoming a painful market for Lufthansa, where once it was a money-spinner. 2013 will see a battle for market share, especially once Berlin's Brandenburg Airport finally opens.