The three major sixth freedom hubs in the Middle East – Dubai, Doha and Abu Dhabi – added 7.7 million passengers between them in 2011. Passenger traffic at the three hubs continues to grow by leaps and bounds, regardless of the regional disruptions that affected traffic in the Middle East last year. Much of this is testament to the strength of their home carriers, the industry aligned development policies pursued at each airport and the vision of local governments to transform their cities into major aviation centres.

Combined, the three hubs had an average passenger traffic growth rate of 10.5%. This is a notably stronger performance than the rest of the Middle East, where international traffic expanded 8.9% over 2011. Hub growth is closely tied to growth from each hub's main carrier: Etihad Airways, Emirates and Qatar Airways. All three have already announced significant expansion in the near future.

Doha International Airport had the strongest year of the three hubs, a fact that will be gratifying for Qatari aviation officials, who have a long-standing rivalry with their near neighbours in the UAE. The airport handled 18.1 million passengers in 2011, growth of 15.2% year-on-year. 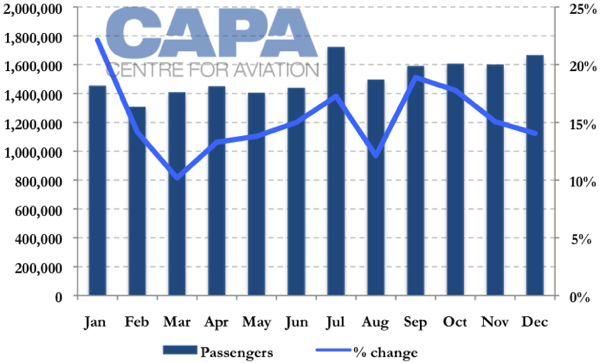 Cargo traffic growth was also impressive, up 13.7%. Doha Airport handled a little more than 795,500 tonnes of cargo during the year.

The outlook for freight traffic in the longer term is favourable for Doha Airport. Qatar Airways ordered two new Boeing 777Fs at the Dubai Airshow in Nov-2011 and plans to increase its dedicated cargo fleet from six to 11 aircraft over four years. It also wants to be the first airline to operate A330 converted freighters and plans to convert around half of its existing A330 passenger aircraft to freighter duties.

During 2011, Doha Airport opened its new Terminal B, which will serve the more than 30 foreign carriers that operate at the airport. The new terminal will help facilitate the increased passenger levels at the airport until the New Doha International Airport opens in late 2012. Qatar Airways will operate exclusively from the existing departures terminal, now renamed Terminal A.

The carrier will repeat that performance this year, adding another 15 new routes. It has already launched two (a linked service to Baku and Tiblisi) and plans to add routes to Kigali in March, Perth in May and Zagreb in July. Other new routes will include Helsinki, Mombasa, Zanzibar, St Petersburg, Belgrade and Gassim. It will also increase its focus on premium destinations such as London Heathrow.

NDIA is scheduled to commence commercial operations late this year. The original plan called for a 2011 opening, but delays in the programme have pushed the time frame back.

Officials from the NDIA Steering Committee and Mr Al Baker have said that the airport will open in late 2012 – most likely in December – but only after a thorough testing of the facilities. Their wish is to avoid a repeat of teething issues such as those that occurred around the opening of London Heathrow’s Terminal 5.

With 51 million passengers passing through last year, Dubai International Airport is the busiest airport in the Middle East by a significant margin. However, growth at the airport was up a comparatively modest 8% last year, a rate of growth eclipsed by its rival hubs at Doha and Abu Dhabi. 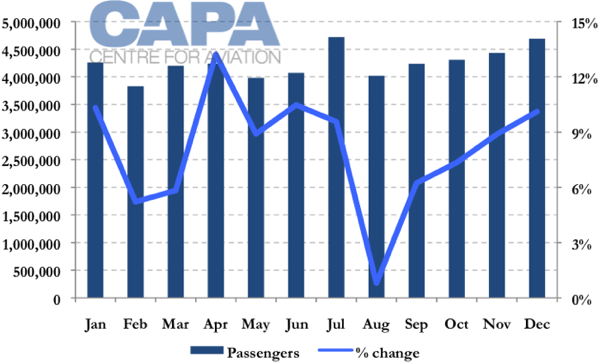 More worrying for Dubai was its cargo performance, which declined 1.5% year-on-year, to 2.2 million tonnes. It opened a USD200 million dedicated cargo facility in 2008, increasing capacity to 2.5 million tonnes p/a.

Much of the reduction has been due to displacement of cargo operations to the new Al Maktoum International Airport, which handled just under 90,000 tonnes in 2011. Combined, Dubai’s two airports handled 2.3 million tonnes of airfreight in 2011, up marginally from 2010. Dubai Airports is projecting that combined cargo volume at the two airports will exceed 3 million tonnes by 2015. 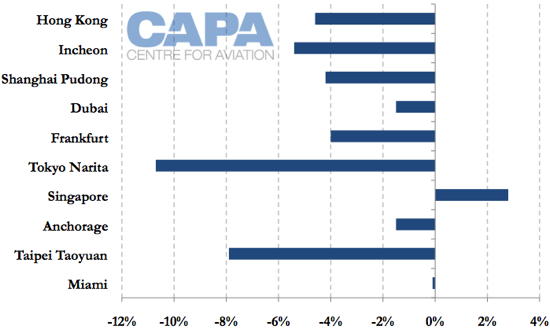 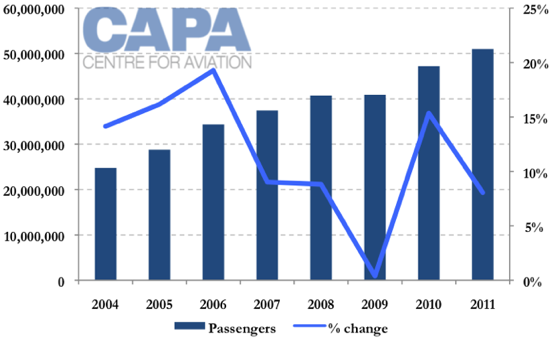 Emirates has already launched seven new routes in 2012. Buenos Aires and Rio de Janeiro were added on 03-Jan-2012, followed by Dublin later in the month. February saw the addition of new African routes to Lusaka and Harare and an ultra long-haul service to Dallas (replacing the second daily Houston flight) while March saw service commence to Seattle, which coincided with Emirates taking delivery of Boeing's 1000th 777 (a -300ER variant). Emirates CEO Tim Clark has spoken in general about adding additional US points in the future, but more recently has suggested an announcement for at least one US city is imminent.

The route expansion will continue apace through the year. Southeast Asian services will also be expanded, with a new service to Ho Chi Minh City in June. European operations will also see new services, with Emirates set to add a second Spanish route, to Barcelona, in July. It will also increase Dubai-Madrid frequency from once to twice daily.

Emirates has also been reinforcing its Middle East and African networks in the early part of the year beyond the new Lusaka and Harare services. More capacity has been added to Tunis and Baghdad and it will delink its service to Addis Ababa and Entebbe into separate services at the end of Mar-2012. The airline also plans to increase capacity to Durban.

Of increasing importance at Dubai Airport is the rapidly expanding local LCC flydubai. The carrier, which is closely linked with Emirates, has strong network connections within the Middle East, as well as in Eastern Africa, the Indian sub-continent and Central and Eastern Europe. It took delivery of 10 new 737-800s last year, and is due to take delivery of another seven this year.

flydubai’s recent route expansion has concentrated on destinations fairly close to home. Since Dec-2011, it has added four new routes to Iraq – Baghdad, Erbil, Najaf and Sulaymaniyah – as well as new service to Taif, its seventh destination in Saudi Arabia. The carrier has also continued its expansion into the fringes of Europe, launching a new route to Bishkek, its 50th destination added in just three years.

Since its launch in Jun-2009, flydubai has become a mainstay at Dubai Airport, complementing Emirates’ network with services to a number of secondary, and often thinner, destinations. It now accounts for almost 10% of capacity by seats at Dubai. 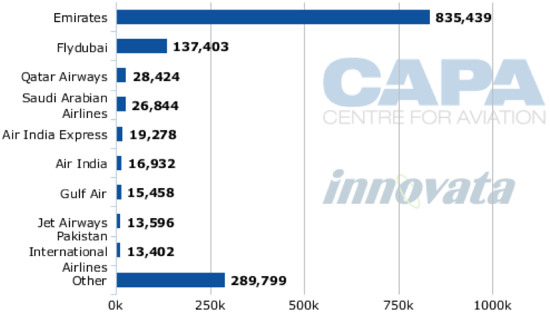 Abu Dhabi: Strong performance in 2011 and high expectations in 2012 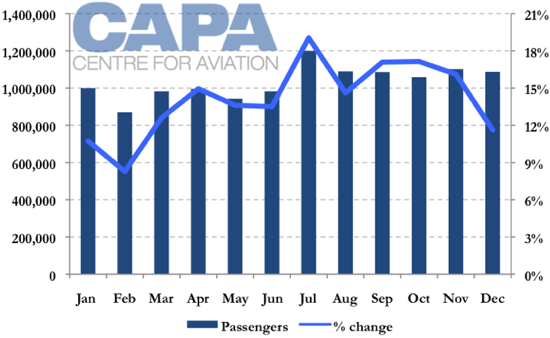 Cargo performance was slightly more modest, up 10% year-on-year to 481,500 tonnes. Abu Dhabi has increasingly been positioning itself as a freight transfer hub, with heavy investment in cargo infrastructure projects. However, the dedicated cargo terminal is nearing capacity and Abu Dhabi Airports Company (ADAC) has launched a short-term capacity enhancement programme, while it evaluates options on the construction of new cargo facilities.

ADAC is forecasting another strong year for ADIA in 2012. It aims to increase traffic at ADIA to nearly 14 million passengers this year, growth of around 12%. 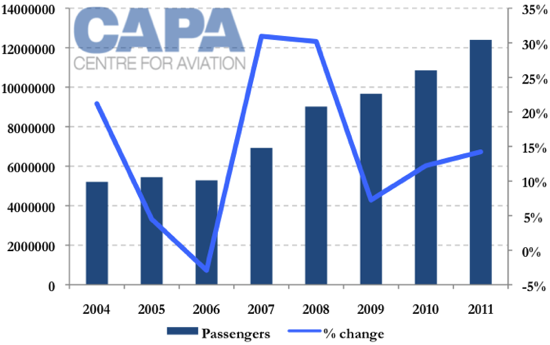 ADAC reported a strong start to the year at Abu Dhabi, with passenger traffic up 18% year-on-year in January.

ADAC will also award the contract for its new midfield terminal complex in early 2Q2012. The new facility will add capacity for 27 million passengers p/a, with the potential to expand to 40 million p/a. The complex is due to become operational in 1H2012.

Abu Dhabi’s home carrier Etihad Airways had another year of aggressive growth in 2011, underlining its status as one of the world’s fastest growing airlines. It added only five new routes – Bangalore, Male, the Seychelles, Chengdu and Dusseldorf – but expanded passenger traffic by 17% during the year. The carrier handled 61.4% of all passenger traffic at Abu Dhabi last year.

Etihad also achieved a major financial milestone in 2011, reporting its first ever annual profit. The carrier expects to continue this profitable growth in 2012.

One of the key’s to Etihad’s growth are its partnerships, particularly the strategic deal made with airbelin, Etihad’s first equity investment in another carrier. Under the partnership agreement between the carriers, airberlin will shift its Middle East hub from Dubai to Abu Dhabi and enter into a major codesharing agreement with Etihad.

Etihad forecasts the deal will add USD50 million to its revenue in 2012. It has also signed an agreement to take a 40% stake in Air Seychelles, as part of a bid to rescue the troubled carrier.

Etihad’s alliance with Virgin Australia will continue to drive its growth in Australia. It has reported a 700% increase in revenue – from an unknown, but likely low base – than when it partnered with Qantas. Virgin Australia's announcement in Feb-2012 to split the legal entities of its domestic and international operations will allow for further overseas investment in its domestic operation. Etihad CEO James Hogan has expressed an interest in acquiring a stake in Virgin Australia. Mr Hogan also said Etihad has an appetite – and the cash – for a few airline investments this year.

Mr Hogan has announced Etihad will serve Washington DC with a daily service from Mar-2013 and will add at least two points to its US network once 787s arrive in late 2014. The Americas are the last points the Gulf network carriers have not fully landed on but are increasingly turning their attention to. Included is Latin America, and Mr Hogan expects Etihad to open a route to the continent in 2013, which will have his carrier join Emirates and Qatar in serving every inhabitable continent.

The success of the Middle East sixth-freedom hubs is even more stark when measured against the lacklustre performance of the largest hubs in Europe – London Heathrow, Paris Charles De Gaulle and Frankfurt – over the past few years. 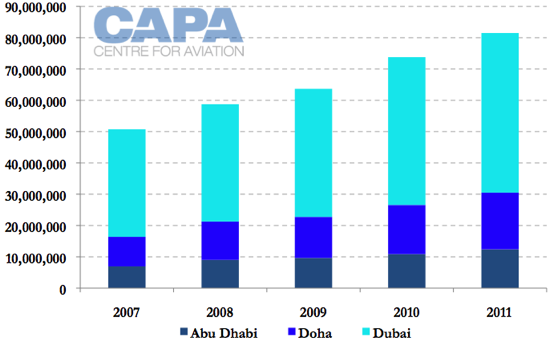 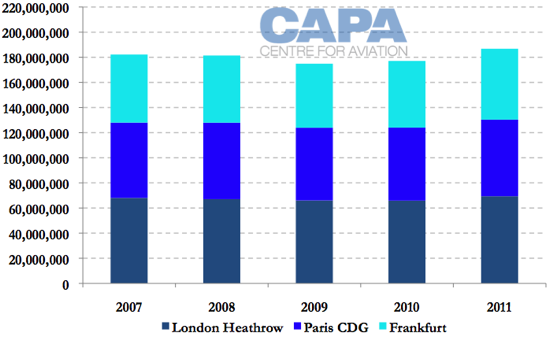 Without the strong growth registered in 2011 – when international traffic growth in Europe actually outpaced that of the Middle East – passenger traffic at these hub airports would have shrunk between 2007 and 2010. 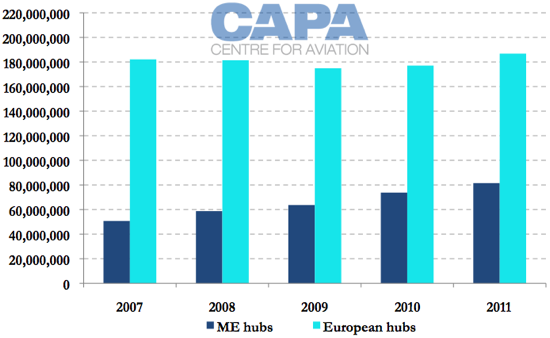 Dubai is investing USD7.8 billion to expand its capacity to 90 million passengers p/a by 2018. London, on the other hand, has little room for growth: its twin runways operated at 99.2% of capacity in 2011 and a third runway is off the cards. With the addition of the new Doha airport, the start of passenger operations at Al Maktoum International Airport, the midfield complex at Abu Dhabi and Concourse 3 and 4 at Dubai, the home airports of the Gulf carriers will add capacity for another 130 million passengers p/a by 2018, leaving plenty of room for expansion, which the region’s carriers are already preparing for.