London-Singapore is a large market but is currently only served nonstop in both directions by Singapore Airlines (SIA) and British Airways. Norwegian should be able to stimulate new demand and attract passengers who are now flying on competitively priced one stop products.

There will also be opportunities to carry passengers beyond London and Singapore. However, Norwegian will need to rely mainly on end to end traffic.

This is Part 1 in a series of reports on Norwegian’s new London-Singapore route and the fast expanding long haul low cost sector.

Eurowings is suspending service to Phuket at the end of Apr-2017 but is maintaining service to Bangkok. Both routes were launched by the Lufthansa Group subsidiary at the end of 2015, enabling Eurowings to take over from Norwegian the distinction of having the world’s longest LCC route.

Norwegian initially gained the distinction of operating the world’s longest LCC route in Jun-2013, when it launched services to Bangkok from Oslo and Stockholm. Copenhagen to Los Angeles, a slightly longer route by distance, was launched in Mar-2014 and is currently Norwegian’s longest route. (Norwegian added Copenhagen to Bangkok in Jul-2014, but Copenhagen-Bangkok is slightly shorter.)

Norwegian’s Copenhagen-Los Angeles service is currently the third longest LCC route in the world and will become the second after Eurowings suspends Cologne-Phuket. However, French Blue and Scoot will briefly overtake Norwegian in Jun-2017 as they launch Paris-La Réunion and Singapore-Athens respectively.

French Blue, a tiny independent long haul LCC which began operations in 2016 and currently serves the Caribbean, plans to begin service to La Réunion in the Indian Ocean on 16-Jun-2017. For three months this rather obscure startup airline will have the distinction of having the longest LCC service in the world.

The Cologne-Bangkok route will drop to the third position and Singapore-Athens to the fourth position after Norwegian launches London-Singapore. London-Singapore will be 1,500km, and two hours longer, than Paris-La Réunion.

Longest route for each LCC/LCC group with long-haul operations: as of end Sep-2017

Note: based on scheduled routes for week commencing 25-Sep-2017 with the exception of AirAsia X's Kuala Lumpur-Jeddah route, which is a seasonal route not operating in the week beginning 25-Sep-2017.
Source: CAPA – Centre for Aviation & OAG.

Singapore-London will also become the longest LCC route in history

Norwegian currently has several LCC routes of more than 8,000km, including all of its routes to Bangkok, Las Vegas, Los Angeles and Oakland. Based on scheduled flight time, Bangkok to Stockholm is currently Norwegian’s longest route, at 12hrs, but Copenhagen-Los Angeles, Bangkok-Copenhagen and Bangkok-Oslo are longer based on distance.

Bangkok-Oslo is 11hr 45min and Bangkok-Copenhagen is 11hr 40min – also making it longer than Copenhagen-Los Angeles based on scheduled flight time. Eastbound flights from Scandinavia to Bangkok and from the US to Europe are shorter than the westbound sectors, due to tail winds.

Regardless of the definition, London-Singapore is clearly a longer flight than any existing flight in the Norwegian network or any other LCC route. Even in the quicker eastbound direction, from London to Singapore, the scheduled flight time is 12hr 45min – which is longer than any existing LCC flight. From Singapore to Gatwick the scheduled flight time is even longer, at 13hr 40min.

Singapore-London is also longer than Hong Kong-London and Hong Kong-Vancouver, which were served by Oasis Hong Kong. Oasis suspended operations in 2008. AirAsia X initially launched services to London in early 2009.

AirAsia X is aiming to relaunch Kuala Lumpur-London Gatwick services – potentially as early as 2H2017 if it decides to lease 777s, and at the latest in 2019, when it plans to take delivery of new generation A330-900neos. However, AirAsia X will not regain the distinction of operating the longest LCC route in the world because Singapore-London is longer.

The most likely longer LCC route over the next few years is Manila-Los Angeles, which is nearly 1,000km longer than London-Singapore. Cebu Pacific is now evaluating new generation long haul aircraft which would be capable of operating in high density configuration from Manila to Los Angeles, as well as on slightly shorter routes from Manila to San Francisco and Vancouver. However, Cebu Pacific is not planning to make a decision on new long haul aircraft until 4Q2017 or 2018 – and deliveries are not likely until at least 2019.

Singapore has been keen for several years to position Changi as a hub for long haul low cost services. The airport initially worked closely with Jetstar, which in 2010 became the first LCC in Singapore to operate widebody aircraft. Jetstar’s Singapore-Auckland service was the longest LCC route from Singapore until it was suspended in 2014.

Jetstar initially had plans to establish a widebody base in Singapore to supplement its existing narrowbody base, which is operated by the Singapore based Jetstar Asia. The Singapore Airlines Group responded in 2011 by deciding to establish its own long haul low cost subsidiary. Scoot launched services in mid 2012 and Jetstar subsequently retreated, cutting two of its three widebody routes from Singapore and dropping plans for a widebody base.

Jetstar’s long haul division currently only operates to Singapore from Melbourne. Meanwhile Scoot has expanded rapidly in its first five years and links Singapore with 21 destinations – 14 of which did not previously have LCC services.

However, Changi’s aspirations for a true long haul low cost service have taken much longer to become reality. The longest LCC route from Changi is currently nine hours (Jeddah), which by some definitions is still considered medium haul.

Norwegian initially considered serving Singapore from Scandinavia. However, Singapore-Scandinavia is a relatively small local market – much smaller than the Bangkok-Scandinavia market.

Norwegian would have to rely much more heavily on transit traffic from beyond Scandinavia if it launched services from Singapore to Copenhagen, Oslo or Stockholm. While this is feasible, it would require extremely aggressive fares given the low one stop fares that are already available from full service airlines in the Singapore-continental Europe market.

London is a more sensible option as it enables Norwegian to focus more on the local Singapore-London marker, which seems underserved.

London is the largest European destination from Singapore. There were 1.2 million passengers on the nonstop Singapore-London route in 2016, according to Changi Airport. 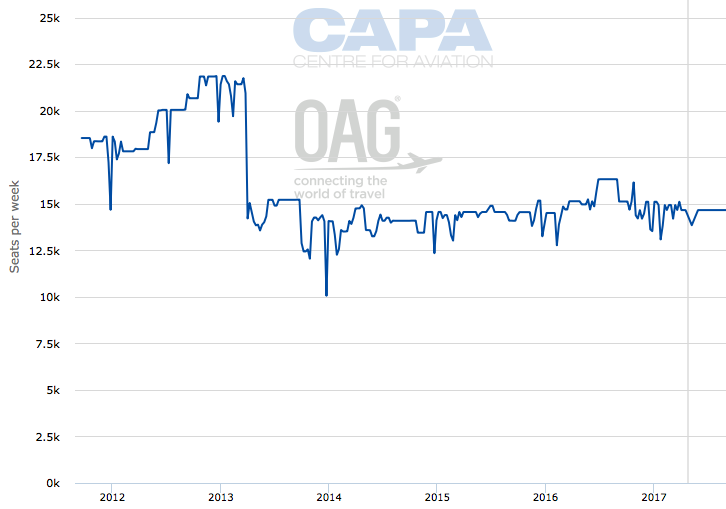 Singapore Airlines has been operating four times daily flights on the Singapore-London Heathrow route since 2012. Two of the flights are currently operated with A380s and two with 777-300ERs, providing 9,000 to 10,000 weekly one way seats (depending on the configuration used). SIA has reduced capacity to London slightly over the past year as it has retrofitted its A380 and 777-300ER fleets with premium economy, which has reduced the total seat count across both types.

British Airways operates two daily frequencies on Singapore-London, including one 777-300ER flight which originates in Sydney and one A380 turnaround flight. BA currently has 5,376 weekly one way seats in the Singapore-London market.

Less than 50% of the passengers carried on Singapore-London consist of local traffic. A large proportion of BA's London-Singapore traffic continues to Australia, including on its own Singapore-Sydney flight. A relatively small proportion continues beyond London to other markets in Europe (including domestic UK and Ireland) and to the Americas.

For SIA, a majority of its London-Singapore traffic continues beyond Singapore, primarily to Australia and New Zealand, but also to regional destinations within Southeast Asia.

Norwegian will provide 1,720 one way seats from London to Singapore in the next northern winter season, giving it approximately a 10% share of total nonstop seat capacity. However Norwegian's share of passengers in the local London-Singapore market will be much higher, likely more than 15%, since it will carry primarily local passengers compared to the over 50% transit ratio for BA and SIA.

The 10% capacity share for Norwegian excludes capacity provided by Garuda Indonesia, which currently operates three weekly 777-300ER flights on a Jakarta-Singapore-London Heathrow-Jakarta routing. Garuda has been offering a one way nonstop product in the Singapore-London market since Mar-2016, but is not a major competitor as most passengers want to avoid transiting in congested Jakarta on the return. (As Garuda does not operate any nonstop flights from London to Singapore its capacity is not included in the London-Singapore capacity graph in the previous section.)

The stop in Singapore on Garuda’s service to London is also considered temporary until Jakarta Airport completes a runway upgrade project, which will enable Garuda to operate the route nonstop in both directions. Jakarta plans to complete the runway upgrade project in early 2018. Once Garuda removes the Singapore stopover on its Jakarta-London eastbound service its share of the Singapore-London market will likely drop to less than 1%.

Emirates is the largest one stop competitor

Emirates has the largest share of one stop Singapore-London traffic, accounting for approximately 9% of total bookings in 2016, according to OAG Traffic Analyser data. Qatar Airways captured a 4% share and Malaysia Airlines a 2% share. Five other airlines captured approximately a 1% share, including Cathay Pacific, Etihad, Finnair, Lufthansa and Turkish Airways. 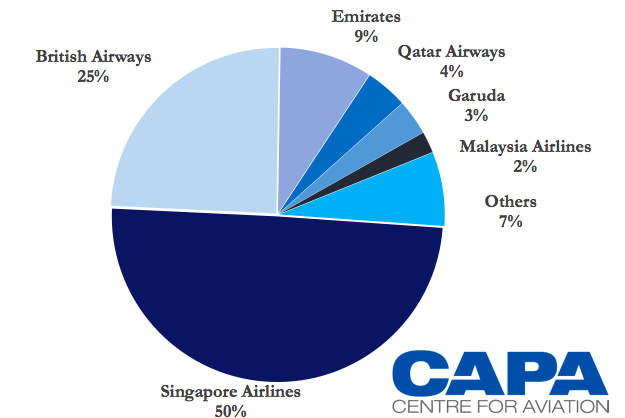 Norwegian should be able to attract a proportion of the passengers that are now flying one stop, as well as stimulating new demand, since it will be the first LCC option in the London-Singapore market. Norwegian’s return fares in the Singapore-London market start at slightly less than USD500 including taxes.

Norwegian could face challenges, given the highly competitive environment

Norwegian is likely betting that price conscious passengers now going for the relatively cheap one stop options will opt for the convenience of nonstop. However, current one stop full service airline fares are already at LCC like levels, which could make it difficult for Norwegian to attract sufficient traffic – particularly during off peak periods.

For example, on return travel from London to Singapore for a trip departing 25-Oct-2017 and returning 29-Oct-2017, Norwegian’s USD459 return fare (which is the lowest London-Singapore fare currently available on any dates) is only USD51 cheaper than the lowest priced one stop option, on Turkish. Norwegian does not include bags, meals or drinks with its basic economy fare. Therefore for a passenger checking bags and wanting an inflight meal, the total price on Turkish (and other full service airlines) may end up being less than the total price on Norwegian.

Norwegian’s fare is also a relatively modest USD116 cheaper than BA and USD201 cheaper than SIA on the same dates. However, for a very price sensitive passenger these differentials can be critical. Further, it is also likely that Norwegian will offer larger numbers of fares at these lower levels than their competition.

Norwegian will need to rely mainly on the local Singapore-London market. While it is offering Singapore passengers connections to Europe and the US, it will be hard to undercut the already low fares in the Singapore-continental Europe and Singapore-US markets. For most city pairs Norwegian is also offering longer total journey times than full service competitors.

At least initially, beyond Singapore Norwegian will have to rely entirely on self connections as it does not have any partners. At CAPA's Americas Aviation Summit in Apr-2017 Lars Sande, SVP Sales Norwegian, made clear that the LCC is averse to complicating its model by providing for connections with other airlines. However, cost conscious travellers are increasingly able to arrange for self connections and, ironically, one such option for Australian travellers could include the low cost operations of SIA's low cost subsidiary Scoot.

If Norwegian does make inroads – and history suggests it will have an impact – it will be interesting to see if SIA responds by accelerating Scoot's European expansion, or simply expands discounting on the mainline carrier.

In Part 2 of this report CAPA will examine how the route – and potentially other new long haul routes from Norwegian – impact the Gatwick and Singapore markets.