London City Airport (LCY) reported an increase of 7.7% in passenger numbers to 3.65 million in 2014, its highest ever number and ahead of forecasts according to CEO Declan Collier. The airport attributed the growth to increased business confidence, helping to return business travel to pre-recession levels. Traffic also received a boost from the entry of UK regional airline Flybe just before the start of the winter 2014/2015 schedule at LCY.

Flybe's entry into London City, at a time when CityJet has been reducing capacity, has given a significant boost to domestic capacity and also had an impact on the list of top routes. In the current winter schedule, Amsterdam has been replaced by Dublin as the number one destination by seats, with services now from all three of the airport's biggest airlines (British Airways, CityJet and Flybe).

A number of routes have been cut this winter by airlines at London's most expensive airport (as defined by aeronautical revenue per passenger), although Flybe's entry tips the balance in favour of routes opened. The high cost of operating at the airport will lead to further route churn, but the strategy seems to be working.

BA and CityJet are still ranked one and two and London City, but the competitive landscape has changed with Flybe's entry

British Airways consolidated its position as the biggest airline at LCY in 2014, adding three new aircraft to give it a total of 17 at the airport. In the winter 2014/2015 schedule, BA opened new routes to Dublin and Hamburg (the latter through its franchise partner Sun Air) and increased frequencies on its routes to Isle of Man, Edinburgh and Glasgow. BA also cut its Stockholm and Aberdeen routes this winter, but will launch two new seasonal routes in Summer 2015, namely the Greek islands of Mykonos and Santorini.

The number two airline at LCY is still CityJet, no longer part of the Air France-KLM Group, although its share of slots has fallen since finding a new owner. The most significant change to the strategic landscape at the airport came from the entry of Flybe in Oct-2014, with international services to Amsterdam and Dublin and domestic routes to Aberdeen, Belfast City, Edinburgh, Exeter and Inverness. BA's withdrawal from Aberdeen coincided with Flybe's entry on the route at the start of the winter 2014/2015 season. Flybe competes with BA on the services from LCY to Amsterdam, Dublin and Edinburgh.

The airport is awaiting planning permission to develop its existing infrastructure with the construction of seven additional aircraft stands, a parallel taxi lane and a new arrivals terminal. The airport expects to handle 6 million passengers per year by 2023.

British Airways had a 44% share of slots at LCY in the summer 2014 schedule and has a 41% share this winter. Its share has increased significantly since 2009. CityJet, still number two, saw its share of slots fall to 27% in summer 2014 from 39% in summer 2013. CityJet's share this winter is down to 23% from 35% last winter. This lower share reflects its restructuring following years of losses and its sale by Air France-KLM to Intro Aviation in May-2014.

Flybe's arrival at LCY gave it a 3% share of slots allocated in the summer 2014 schedule (it commenced its Belfast and Edinburgh services just before the end of the summer) and a 14% share in the winter 2014/2015 schedule. 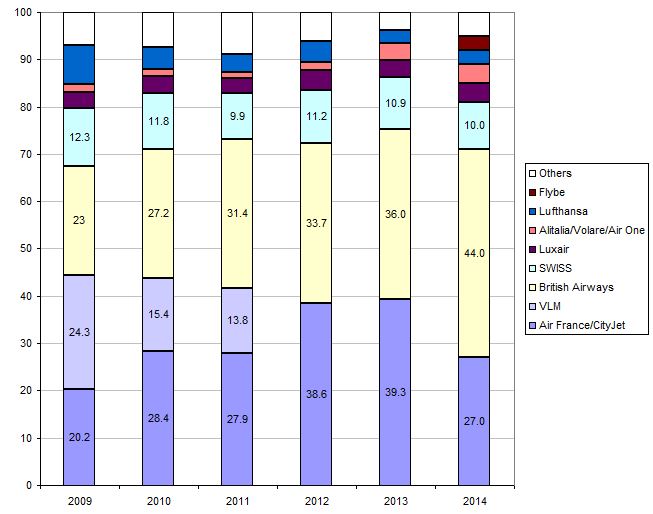 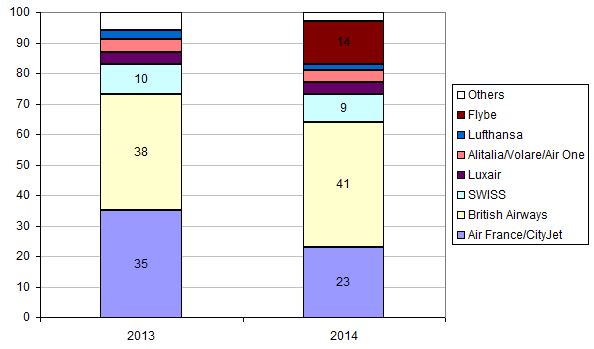 See related report: London City Airport talks aviation: 'In the city, there’s a thousand things I want to say to you'.

The summer 2014 schedule saw a 10% increase in domestic seats, compared with a 7% increase in international seats. Domestic seat growth had also outpaced international seat growth the previous summer. Flybe's entry gave a further boost to domestic traffic at LCY: domestic seats increased by 82% in the winter 2014/2015 schedule compared with winter 2013/2014. Domestic routes account for 27% of seats this winter, up from 18% last winter.

The total number of seats in the winter schedule is up by 24% year on year, mainly thanks to Flybe's entry, and this suggests that LCY's passenger numbers will grow faster in calendar 2015 than in 2014. 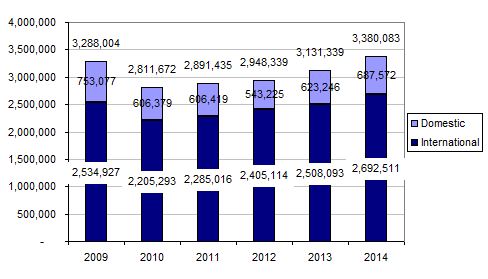 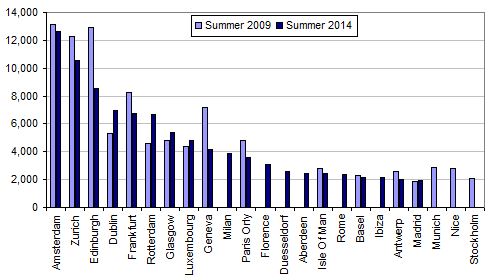 Flybe's entry has made a big impact on the top 20 routes by seats in the winter 2014 schedule, which has some important differences from the previous winter. Dublin becomes the number one destination, ahead of Amsterdam, reflecting the presence now of all of LCY's three biggest airlines (BA, CityJet and Flybe).

Capacity to Amsterdam has also increased, due to Flybe's entry, but not enough for it to retain its number one spot. Edinburgh has leapfrogged Zurich into third place this winter, as a result of Flybe's entry, BA's increased frequency and Flybe's subsequent frequency increase.

The winter 2014 schedule has recorded a significant increase in the concentration of seat capacity from LCY on the larger destinations. Only four of the top 20 destinations (Luxembourg, Geneva, Aberdeen and Antwerp) have suffered a fall in seat numbers from winter 2013. The top 10 routes account for 71% of total seats at the airport this winter, compared with 63% last winter. The top 20 account for 90%, compared with 85% last winter. 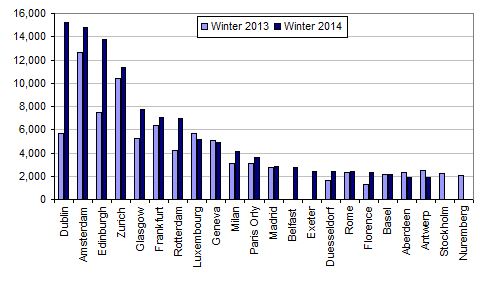 London City Airport is still primarily known as a business airport and its biggest destinations reflect this. Nevertheless, the establishment in recent years of destinations such as Florence and Ibiza demonstrates that it now also has some appeal to leisure travellers (something that BA will develop further with its Mykonos and Santorini routes this summer).

The key for airlines operating at LCY is to be able to generate sufficient yield to cover the very high airport charges. In a previous analysis report, we noted that Flybe appeared to be pricing its new routes below its average network unit cost. Moreover, based on the published tariffs for aircraft landing/departure fees and the passenger supplements and security, London City appears more expensive than other London airports for Flybe's aircraft types.

Airport charge tariffs are complex and calculating the relative cost to an airline at each airport is not straightforward; but a simple calculation of airport revenues per passenger at the six airports serving the UK capital shows that LCY generated almost the same level of aeronautical revenue per passenger as Heathrow and more than twice that of Gatwick, Stansted and Luton in 2013.

Aeronautical revenue per passenger is the total amount paid by airlines to airports in fees and charges divided by the number of passengers and so gives a good indication of how expensive an airport is relative to other airports. This analysis demonstrates that LCY is a high cost airport within the context of the London market.

LCY's high aeronautical revenue per passenger is all the more remarkable when account is taken of the average trip length at each airport. Broadly speaking, it seems reasonable to assume that airports serving a greater proportion of long-haul destinations will have higher charges than those serving only short-haul routes.

There are two principal reasons for this. First, long-haul aircraft require a greater quantity of more expensive infrastructure, such as longer runways, larger stands and gate areas and bigger baggage handling equipment. Second, airlines' ability to cover their costs through their fares is partly related to the length of the flight, since fares for longer trips are typically higher than on shorter trips.

With this in mind, it is notable that LCY has the shortest average trip length among London airports (only BA offers a long-haul destination: New York JFK via Shannon), but it has almost the highest level of aeronautical revenue per passenger. This can only make sense to the airlines operating at LCY if they can generate a premium level of yield.

The infrastructure has kept the major LCCs out of LCY and this has helped airline pricing, as has its proximity to the business centres of London. 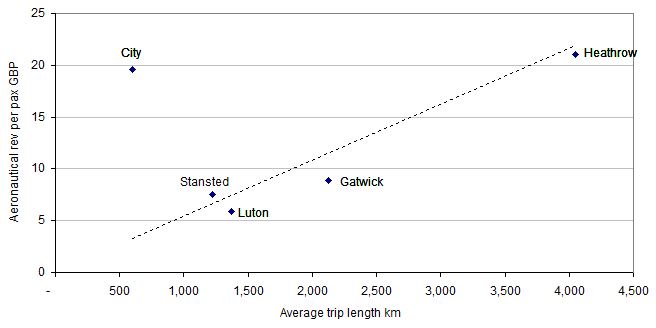 *Nearest financial year to 2013 for aeronautical revenue per passenger; average trip lengths calculated from ASK and seat data for Jan-2015 and Jun-2015
**No breakdown of aeronautical vs other revenue for London Southend
Source: CAPA - Centre for Aviation, airport company annual reports, OAG

British Airways has advantages in yield generation, but there will be more route changes

Data on airline yields by airport is not available, so we can only surmise whether or not the leading players are able to make enough revenue at LCY. BA's expansion at the airport suggests that it believes that it can generate sufficient yield, while CityJet's contraction suggests it has not always been able to do so. Flybe's entry suggests that it believes it is possible, but the still nascent nature of its network at LCY means that it may be too early to judge. If, at some point, CityJet returns to growth, with a more efficient cost structure, this could make life more difficult for Flybe.

See related report: Flybe: a niche occupied by few other airlines, but still with a unit cost disadvantage

The strength of BA's corporate relationships, of its frequent flyer programme and its global network give it advantages in yield generation. Flybe's recent partnership with Avios, the IAG reward programme that embraces BA, is a positive step for it in this respect, but it may take some time for the Flybe brand to be associated with premium business travel.

What is clear is that any airline at LCY needs to be very proactive in monitoring its route portfolio there and to be prepared to make rapid changes, especially to cut underperforming routes. Expect further route volatility.