Flybe: a niche occupied by few other airlines, but still with a unit cost disadvantage

At its Capital Markets Day in late Nov-2014, Flybe asserted that it "does not compete with low cost carriers, flag carriers or mid-haul leisure airlines". Moreover, our analysis shows that it rarely competes with other regional airlines. In fact, Flybe faces no competition of any kind on 78% of its city pair routes in its Dec-2014 schedule. Moreover, it is Europe's largest independent regional airline and Europe is the world's largest regional market.

In spite of these advantages and what looks to be a relatively efficient cost base by comparison with other European regional airlines (according to our analysis), Flybe has yet to re-establish sustainable levels of profitability. Much has been achieved since the change of senior management in 2013, but the regional airline's fundamental CASK disadvantage will remain a challenge even as it increases its focus on turboprops rather than regional jets.

Flybe is a regional airline based on aircraft and sector length

Flybe is classified by OAG and CAPA as a low-cost carrier due to its product and service characteristics. However, this is an increasingly ill-defined classification, given the convergence of such characteristics across large parts of the short and medium-haul market. Flybe's network and aircraft fleet define it as a regional airline and this is the peer group against which it now appears to prefer to compare itself.

Although definitions vary, two generally agreed characteristics of regional airlines are that they operate with aircraft and sector lengths at the lower end of the commercial airline range. Typically in Europe, regional airlines deploy aircraft with fewer than 120 seats and have average sector lengths of less than 500 miles/800 kilometres. On both of these dimensions, they are clearly delineated from LCCs, leisure airlines and full service carriers (FSCs). 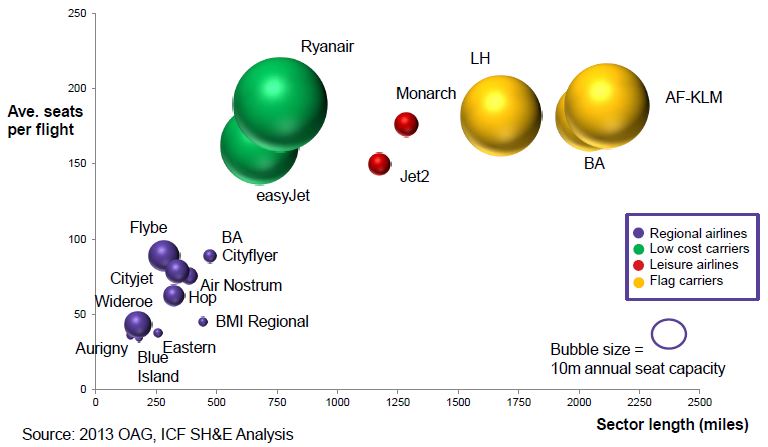 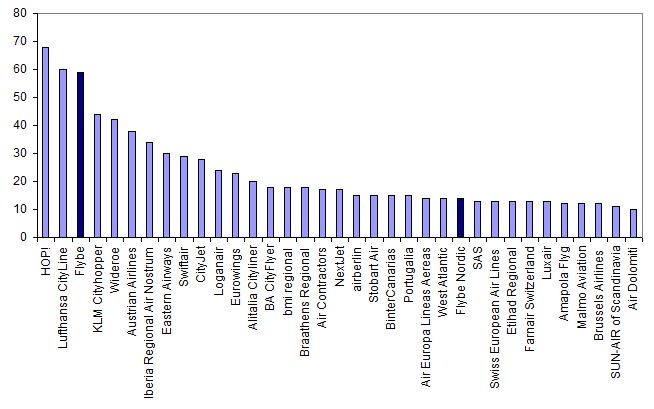 Flybe to increase the focus on turboprops

Flybe currently operates Embraer E175 and E195 regional jets and Bombardier Q400 turboprops. In 2013, it decided that the Q400 was its aircraft of choice for its regional UK network and that its 14 E195 aircraft would exit the fleet at the earliest opportunity. Although the original plan had been to ground all 14 by Apr-2014, Flybe found uses for four of them in 1HFY2015 and so only 10 were grounded in this period. Five E195s will be returned to lessors before the end of Mar-2015 and Flybe continues to seek a permanent solution for the remaining nine aircraft.

Flybe has 11 E175 aircraft in the fleet and agreed in Sep-2014 with Embraer to terminate 20 E175s from its firm order backlog of 24 and to defer delivery of the remaining four until 2018. Flybe has also secured 24 Bombardier Q400s on sub-lease from Republic Airways, with delivery starting in May-2015. In addition, Bombardier will undertake an aircraft enhancements programme on Flybe's existing 45 Q400s.

The move towards a turboprop fleet will put Flybe more in line with other regional airlines operating at or below the 300 mile/500 km average sector length threshold. This should allow it to tailor supply more closely to demand in its chosen markets and will also lead to lower unit costs. It may also lead to lower unit revenues, but Flybe's focus on capacity and cost discipline makes sense. 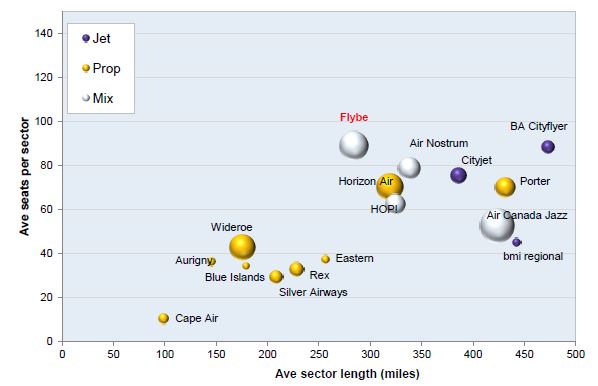 More than 80% of Flybe's routes are on sectors of less than 350 miles (565 km). Europe has more seats flown below this sector length threshold than any other region of the world. This large European regional market is increasingly being vacated by legacy full service carriers, who are restructuring their networks, while the major LCCs' current focus on moving to higher gauge aircraft limits their interest in this end of the market. This provides airlines such as Flybe with the opportunity for future growth. 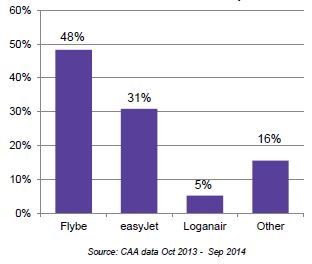 Flybe is the leading airline in the UK regional domestic market

The UK regional domestic market (ie excluding London) is Flybe's most important segment. In the 12 months to Oct-2014, it had a passenger share of 48% in this market, ahead of second ranked easyJet with 31% (according to data presented by Flybe at its Capital Markets Day). Flybe's strength in this segment is further emphasised by the fact that no other carrier had more than 5% of passengers.

No competitors on 78% of Flybe's routes

Perhaps even more significantly, Flybe has no competitors on 78% of routes across its entire network, representing 65% of its seat capacity, according to CAPA analysis of OAG schedule data for the week of 1-Dec-2014. This may vary seasonally, but it broadly bears out Flybe's assertion that it does not compete with low cost carriers, flag carriers or mid-haul leisure airlines - at least on most of its network.

LCCs are its most common type of competitor

However, where there are competitors on Flybe routes, they are most commonly low cost carriers. It faces LCC competition on 16% of its city pairs, which account for 22% of its seat capacity. The second most common type of competitors on its network is full service carriers (8% of its city pairs and 12% of its seats), while regional airlines compete with Flybe on less than LCCs and FSCs do. Regional airlines are its chosen peer group, but it operates largely in different markets from this group.

Flybe: competitive overlap by airline type as a proportion of Flybe's schedule 1-Dec-2014 to 7-Dec-2014

At the individual competitor level, Flybe comes up against easyJet more than any other airline. Europe's second largest LCC overlaps with Flybe on 10% of its routes, accounting for 16% of its seat capacity, according to CAPA analysis of OAG schedule data for the week of 1-Dec-2014. No other airline overlaps with Flybe on more than 4% of its routes or seats. LCCs Ryanair and Germanwings overlap with 3% to 4% of Flybe's network.

Flybe's network FSC competitors are British Airways, Air France, KLM and Aer Lingus, although each overlaps on only a low single digit percentage of Flybe's routes. Moreover, Flybe has codeshare agreements with all four of these airlines. Flybe codeshares with BA on including London Gatwick to Newquay; with Air France on Paris CDG to Birmingham, Exeter and Manchester, Paris Orly to Southampton and London Stansted to Caen and Rennes; with KLM on Amsterdam to Inverness and Southampton; and with Aer Lingus on Dublin to Southampton, Exeter, Inverness and London Southend.

Flybe's most significant regional airline competitors are CityJet and Eastern Airways, but it only has a 2% to 3% overlap with each.

Flybe: competitive overlap by airline as a proportion of Flybe's schedule 1-Dec-2014 to 7-Dec-2014

This analysis largely reinforces Flybe's claim that it has a strong market position with fairly low levels of competition, based on its niche in the UK regional domestic market and supplemented by focused sectors of the UK to Europe market. Moreover, our research suggests that Flybe is among the more cost efficient of Europe's regional airlines.

The data needed to calculate cost per available seat kilometre (CASK) for this peer group is not always readily available, but CAPA has pieced together sufficient to benchmark Flybe against six other regional airlines on a plot of CASK versus average stage length (see chart below). All of the competitors analysed operate in the British Isles and/or the Nordic region, which are major markets for Flybe.

Flybe's CASK is in the middle of this sample of European regional airlines, but it is lower than where the trend line suggests it should be for its average stage length. There are others that are further below the trend line, but our analysis reveals that Flybe is in the more cost efficient half of this peer group. 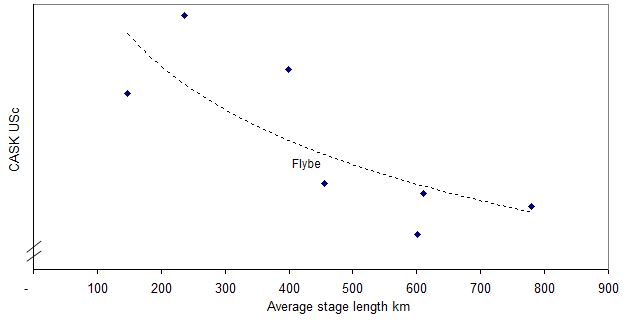 In spite of its strong market position and its relatively efficient level of unit cost by regional airline standards, Flybe has struggled with profitability in recent years.

Although it recorded a positive result in FY2014 for the first time since FY2010 (Mar year end), its 1H FY2015 net result was a loss of GBP15 million compared with a GBP14 million profit in 1H FY2014. The result was weighed down by restructuring and other one-off items, as well as the Flybe Finland joint venture (from which it has agreed to exit on 1-Jan-2015 by selling its 60% to Finnair for GBP1, subject to regulatory approval). 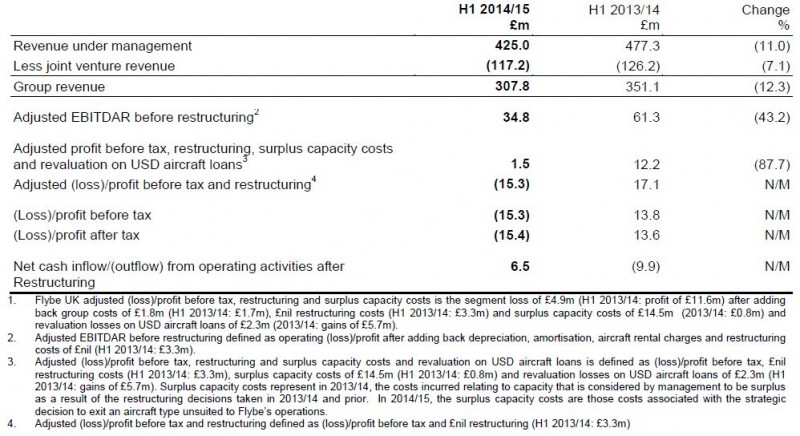 Since CEO Saad Hammad arrived in Aug-2013, Flybe has made good progress with cost restructuring, reconfigured its network, taken action over its fleet requirements and agreed its exit from the Finland joint venture. It has also launched a new base at London City and plans further new bases at Aberdeen and Bournemouth in Mar-2015. In its white label contract flying business, it has recently signed a new contract with SAS.

Flybe has made strong progress on many fronts and occupies a niche market position in which it does not compete (much) with LCCs, leisure airlines, flag carriers, or even other regional airlines. As we have seen, it is also fairly cost efficient for a regional airline.

Nevertheless the challenge for Flybe remains that regional airlines have a fundamental CASK disadvantage compared with operators of larger narrow body jets in the short and medium haul markets, even after taking account of regional airlines' shorter average trip length. This disadvantage is particularly wide against with LCCs. True, the shorter average stage length of regional airlines gives them some protection from these bigger beasts as there will always be sectors that are too short and where demand is too thin to justify a 737 or an A320.

However, LCCs are Flybe's biggest competitors and their lower average unit cost across their networks allows them to under-price Flybe when they do compete on the same city pairs. Even without direct competition, LCCs have a downward impact on pricing in many markets as they compete for discretionary travel spend. This could become a major threat to Flybe, especially if the level of overlap with LCCs grows.

Flybe's move down the scale of sector length and aircraft size, with a growing focus on turboprops, should help to keep this threat at bay, but there can be no relaxation in its cost cutting.