Air Malta Group has not made a net profit since FY2008 and then only thanks to discontinued operations. Its EU-approved Restructuring Plan targets breakeven this financial year and a positive result next year. The approximate halving of losses in 1QFY2014 demonstrates continued progress towards its goals.

Nevertheless, LCC penetration of Malta continues to grow and Air Malta has more work to do to lower its unit costs and to promote the appeal of its product and service versus LCCs. A sustainable level of profitability remains a long way off and it is highly unlikely that the EU would approve any further state aid if the carrier were to slip from its upward trajectory.

As CEO Peter Davies said: “Let me make myself absolutely clear. …we have a tough challenge to achieve the financial breakeven milestone. This requires the understanding and support of all our stakeholders including the employees, unions and suppliers amongst others”.

After disputes with pilots and travel agents in recent months, this message bears repeating.

These results represent a further improvement, not only on the results for the same period a year earlier, but also on the first quarter two years ago. This reflects progress in accordance with the company’s five year Restructuring Plan for the period FY2012 to FY2016, which aims to restore the group to P&L breakeven and positive net cash flow by FY2014 (the year currently under way) and to profitability by FY2015. 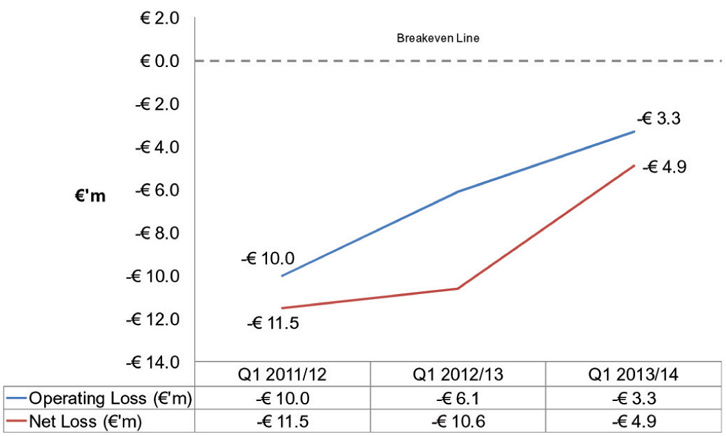 Most recent annual results published are for FY2012

Although Air Malta has published highlights of its 1QFY2014 results, it has yet to publish its annual results for FY2013. In FY2012, it posted an operating loss before restructuring costs of EUR28.5 million and a net loss of EUR35.6 million. Both of these figures were improvements on the previous year (losses of EUR32.8 million and EUR76.9 million respectively), but the impact of accumulated losses had weighed heavily on the group’s balance sheet and book equity stood at a negative EUR103.8 million at the end of Mar-2012. Net debt was EUR45.8 million, although the Government of Malta owed the company EUR46 million, to be paid by 31-Dec-2014, in respect of a property sale.

The EU-approved Restructuring Plan included the provision of a EUR52 million short term rescue aid loan from the Government of Malta (fully drawn down by 31-Mar-2012) and a EUR130 million capital increase (which had yet to be implemented at the last reported balance sheet date). The capital increase was to consist of converting the EUR52 million loan to equity and issuing a further EUR78 million of fresh equity. The Plan provided for capacity cuts, headcount reduction and the sale of assets in addition to Air Malta securing private bank loans.

The positive aspect of the FY2012 results was that Air Malta recorded an increase of 6.2% in group revenues, in spite of a reduction in flight capacity of just under 10% (by number of flights; ASK reduction was less than this). This reflected improved yields, better load factors and the development of ancillary revenues. Employee costs fell by 8.5%, with average headcount down by 9.0%, and non-fuel costs before restructuring costs fell by 3.9%. After a 26.6% increase in fuel costs, total costs increased by 2.9% (before restructuring costs).

Air Malta said in Apr-2013 that the operating loss for FY2013 (year ended Mar-2013) would be around EUR15 million, which is roughly half the loss of the previous year, in spite of an increased fuel bill and lower capacity. The FY2013 results are expected to be published and presented to the company’s AGM in Oct-2013 and CEO Peter Davies said in Jul-2013 that they looked “encouraging”. In Apr-2013, Malta’s Tourism Minister said that the net loss for FY2013 was expected to be EUR28 million, including up to EUR10 million of restructuring costs (MaltaToday, 22-Apr-2013).

Mr Davies said: “We are meeting the milestones listed in the Restructuring Plan. 75% of the 160 projects initiated by the airline have been successfully completed and we are reaping the benefits from the reduction in costs and the increases in revenue these projects are generating. We are on track with our revenue targets but much more needs to be done to reduce costs.” He added that the second phase of development would include a significant overhaul of back office, cabin and ground services divisions and the growth of ancillary revenues. 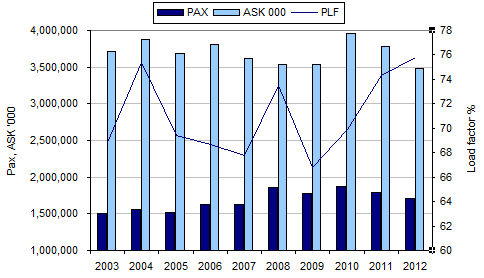 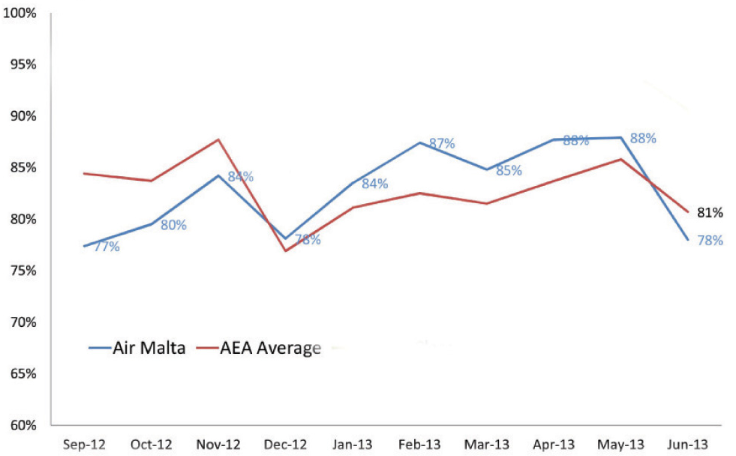 Air Malta is the leading airline by number of seats at its Malta International home, with 44% of seats at the airport (week of 16-Sep-2013, source: Innovata). Ryanair and easyJet are numbers two and three, with market shares of 29% and 6% respectively. Air Malta codeshare partners Lufthansa and Emirates are fourth and fifth. 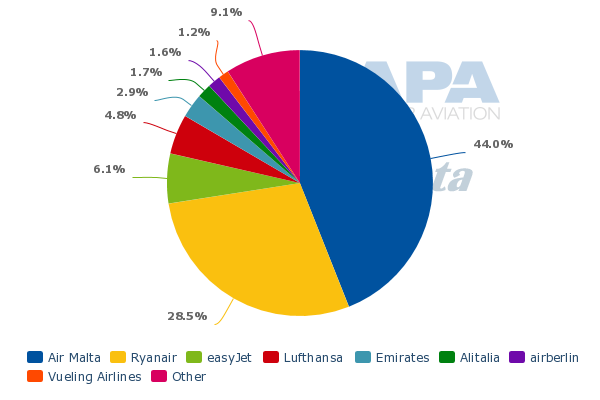 According to Innovata, Air Malta operates to 36 destinations in Europe and three in North Africa from its hub at Malta International Airport. All of its seat capacity is international, with 82% to Western Europe and 12% to Eastern/Central Europe (week of 16-Sep-2013, source: Innovata).

It is not part of one of the branded global alliances, but has codeshares with five Star Alliance members (Austrian Airlines, Brussels Airlines, Lufthansa, SWISS, Turkish Airlines), two SkyTeam members (Aeroflot and CSA Czech Airlines) and Emirates, Etihad and Meridiana. 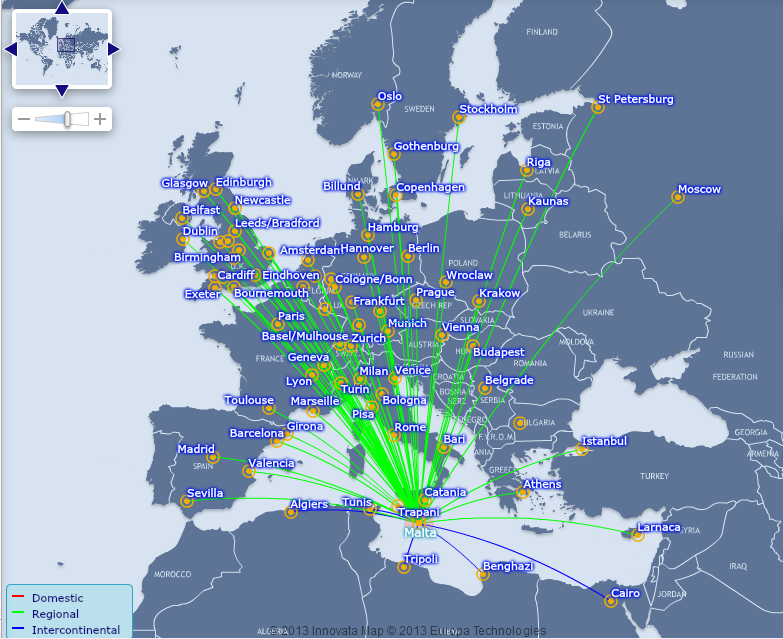 Air Malta’s biggest destination country by number of seats is the UK, reflecting historical ties, followed by Germany, Italy and France (these are the largest countries in the European Union by population). A number of other northern European countries are also represented, reflecting the importance of Malta as a summer sun leisure destination. 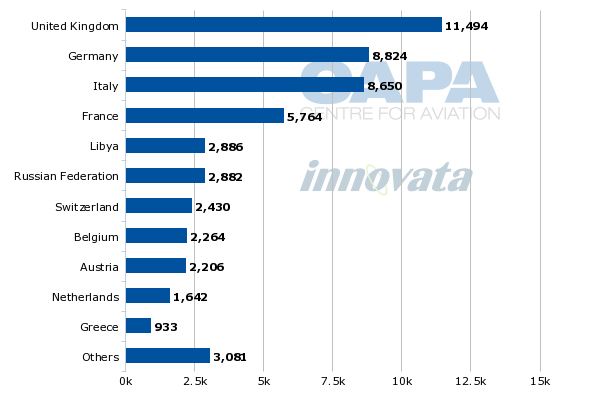 Air Malta’s top four countries are also strongly represented in Air Malta’s top 10 routes, with London Heathrow, Rome Fiumicino, Catania and Paris Orly the top four. Lufthansa’s hubs at Munich and Frankfurt are also on the list, as are Star Alliance codeshare partners’ hubs at Brussels and Vienna. With no long-haul destinations offered by Air Malta itself, these hubs are the only connections between Malta and major intercontinental destinations. Tripoli is the only North African route on the list, underlining the importance to Air Malta of Europe over North Africa, in spite of Malta’s geographic location. 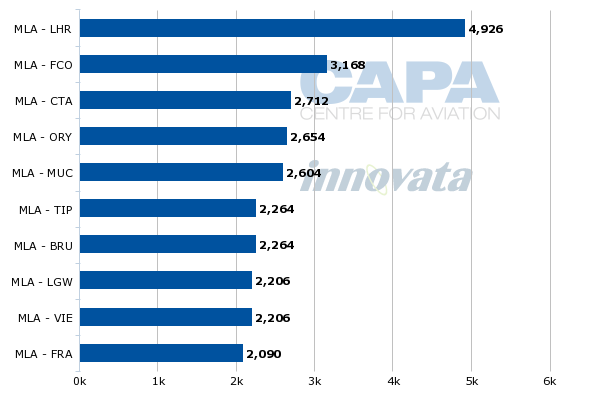 Air Malta’s leisure focus shows in its relatively low frequencies on its routes. It has only 11 routes with a frequency of once daily or greater and 30 routes with less than a daily frequency (week of 16-Sep-2013, source: Innovata). In Jan-2014, these figures will be six and 21 respectively. 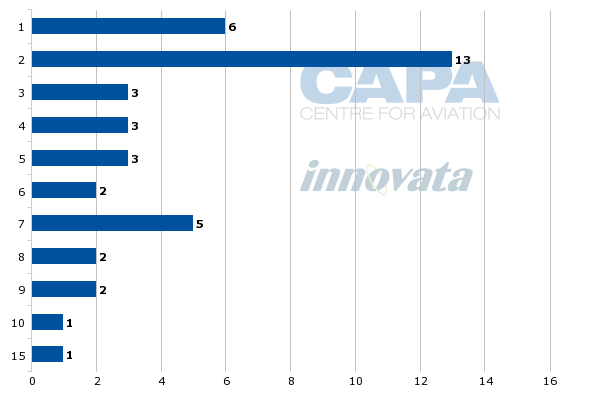 Leading airline on eight of its top nine city pairs

Although LCCs have a significant share of seats at Malta International Airport, competition on Air Malta’s most important routes is less severe. Its top 10 routes consist of nine city pairs, on eight of which it is the leading carrier by number of seats. It is number two on the ninth, Malta to Frankfurt, where codeshare partner Lufthansa is number one. It has a monopoly on three of the nine city pair routes: Catania, Brussels and Vienna.

On the London route, it faces competition from both of Europe’s leading LCCs, Ryanair and easyJet, and the latter also competes on Rome Fiumicino in the peak summer period. Otherwise it faces LCC competition only on the Paris route (from Air France-KLM’s LCC subsidiary Transavia).

Nevertheless, although Air Malta has a fairly robust market position on many of its most important routes, competition from LCCs is growing. The share of seat capacity taken by low-cost carriers is almost 40% for 2013 so far, up from 38% in 2012 and 1% in 2004 (see chart below). 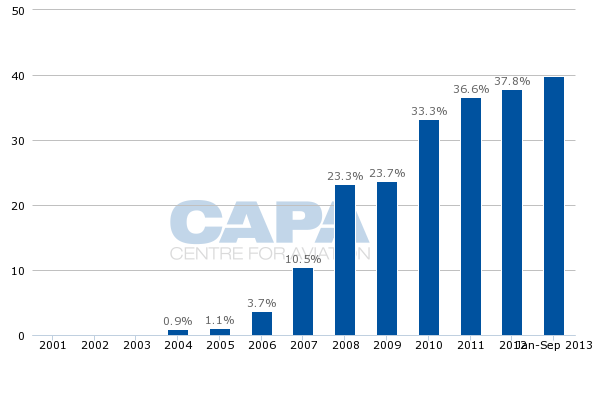 According to the CAPA Fleet Database, Air Malta had a fleet of 10 Airbus narrowbodies as at 16-Sep-2013, with an average age of 8.4 years. There were four 141 seat A319s and six A320s with 168 or 180 seats and all aircraft were financed on operating leases. The aircraft assets that it once owned were sold during the year ended Mar-2011 and, after selling its property to the government in FY2012, it has very little by way of fixed assets apart from a EUR46 million receivable owed by the government in connection with the property deal.

CASK compares favourably with legacy airlines, but not LCCs

Air Malta has not yet published its FY2013 results (year to Mar-2013) and does not give detailed traffic data. Nevertheless, based on FY2012 financial results and traffic data from AEA S.T.A.R. for calendar 2011, we can estimate that its unit costs (CASK – cost per available seat kilometre) are probably somewhere over EUR6 cent and that its average stage length is around 1,500km. This CASK compares favourably with other legacy carriers in Europe, but still puts it at a unit cost disadvantage compared with the LCCs.

While direct competition with LCCs is relatively moderate on a city pair route basis among Air Malta’s most important routes, it competes with LCCs for leisure spend by travellers seeking a holiday destination based on ticket prices. Moreover, LCC penetration in Malta continues to grow. Although its Restructuring Plan is improving Air Malta’s financial results, its inability for a number of years to make a profit out of what seems to be a relatively strong market position suggests that this competition has had a significant negative impact. 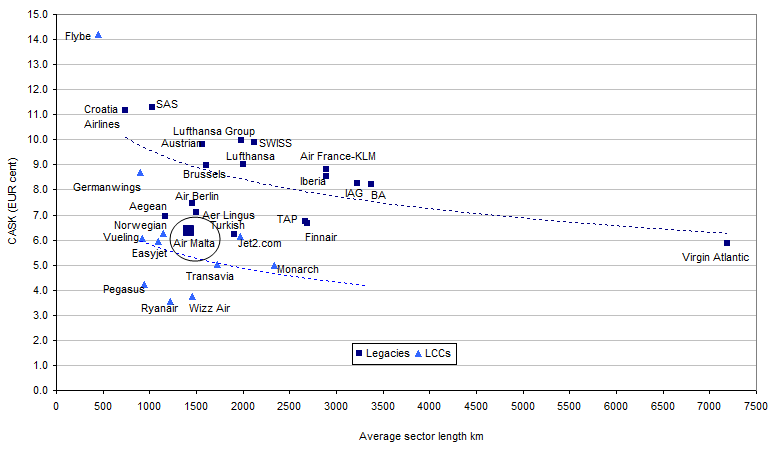 Air Malta's Restructuring Plan and, in particular, the EU’s approval of state aid have bought time for the airline to improve its cost efficiency and its product and service.

Returning to breakeven and then to profitability will represent a significant achievement, but achieving sustainable profitability in a fiercely competitive environment will remain a huge challenge.