Thai VietJet Air will start small with an international focus. Domestic expansion could be painful

Competition in Thailand will intensify further in Mar-2015 when Thai VietJet Air begins scheduled services. The new joint venture carrier will become the fourth LCC in a crowded domestic market that grew almost 20% in 2014.

But the Vietnam-based VietJet Group is pursuing a relatively conservative strategy for the Thai market. Thai VietJet plans to only operate three A320s in its first year and mainly serve international routes.

Avoiding highly competitive routes would be a wise policy as Thailand already faces overcapacity and it will take time for the VietJet brand to gain traction. Thai VietJet could become more of a niche player in selected lucrative growth markets such as Thailand-China rather than a significant competitor in Thailand’s dynamic LCC sector.

This is Part 2 of a two-part series of analysis reports on the VietJet Group.

Thai VietJet finally secured an air operator's certificate in Dec-2014. It has since been using its only aircraft, a 180-seat A320 subleased from its Vietnamese parent, on occasional charter flights from Bangkok to Gaya in India.

VietJet managing director Luu Duc Khanh said at a 16-Jan-2015 media briefing in Singapore that Thai VietJet Air now plans to launch services in Mar-2015. He said the airline will operate some domestic routes but Thai VietJet's main focus will be international flights including to China, India and Myanmar.

The delays in launching Thai VietJet in 2014 had a silver lining in that market conditions in Thailand were unfavourable the entire year due to the civil unrest in Bangkok. But by missing the more recent targets of a late 2014 or beginning of 2015 launch Thai VietJet will now begin scheduled operations after Thailand’s peak season.

Thai VietJet will grow slowly in its initial phase

Mr Luu said the Thai VietJet business plan envisions a minimum of three A320s in 2015 with more aircraft to potentially be added to meet demand. The VietJet Group currently has 20 A320s, including the one aircraft in Thailand, and is planning to take nine aircraft in 2015 from its Airbus order and potentially up to four aircraft from leasing companies. CAPA examined the 2015 outlook for the main Vietnamese operation, which will grow by about 10 additional aircraft in 2015, in the first in this two-part series.

VietJet, which launched services in Vietnam in Dec-2012, has always had big ambitions for establishing a pan-Asian LCC group. But VietJet will face huge challenges in building up a portfolio outside its home market as most Asian markets have already seen a huge influx of LCC capacity over the last decade. The VietJet brand is also relatively unknown outside Vietnam, where it has been able to quickly build up a domestic presence partially because of a lack of competition.

VietJet faces a different dynamic as it enters the Thai market. Thailand’s domestic market already has an LCC penetration rate exceeding 60% while LCCs account for nearly 25% of international seat capacity. 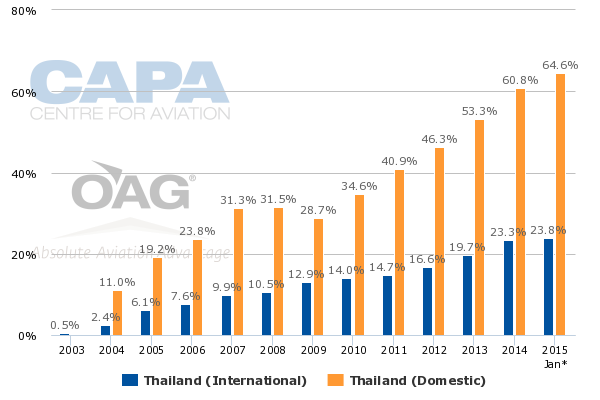 Thai VietJet will likely be a relatively small player on these routes given its preference to focus mainly on the international market. Thai VietJet will also lack the aircraft – at least during its first year – to provide a meaningful amount of capacity on domestic trunk routes.

All four of these markets have already seen a huge increase in LCC capacity over the last two years, driven by the launch of Thai Lion along with rapid domestic expansion from Nok and Thai AirAsia. The surge in capacity has led to a significant decline in yields, leading to losses at Nok and Thai AirAsia. Privately-owned Thai Lion has also almost certainly been unprofitable since its Dec-2013 launch but does not report financial figures.

Phuket growth has been stunted by slot constraints. While Thai VietJet is keen to serve Phuket it will likely struggle to secure slots that are suitable for domestic flights. Thai Lion so far has been able to secure only one slot at Phuket but it offers a much more competitive higher frequency schedule to Chiang Rai, Hat Yai and Udon Thani.

International flights from Phuket are suitable and could potentially be operated by Thai VietJet Air using late night slots. But there is no available space for basing aircraft in Phuket and the lack of daytime slots limit options for flowing aircraft in from Bangkok.

There is still room for further domestic growth in Thailand as the country’s expanding middle class continues to shift from buses and trains to aircraft. But capacity has increased over the last year at a faster rate than demand. The Thai domestic market hardly needs yet another LCC at this juncture. The ideal scenario is slower capacity growth and more rational competition, enabling airlines to return to profitability.

VietJet will also not be as well positioned as its LCC competitors to capture the anticipated domestic growth once market conditions improve. Nok and Thai AirAsia have the scale and schedule to make it challenging for the upstarts.

Thai Lion also faces challenges but has a 15-month head start over Thai VietJet. But Thai Lion has a parent company, Indonesia’s Lion Group, with potentially deeper pockets and has access to a much larger order book.

Thai VietJet will have a slightly different position compared to its larger LCC rivals because it will be operating out of Suvarnabhumi rather than the "low cost" original Bangkok airport at Don Mueang. But this is only an advantage if Thai VietJet is able to partner with foreign carriers that serve Bangkok and need domestic connections. Don Mueang is otherwise an advantage as it is generally a more convenient airport for point to point traffic heading to or from Bangkok.

Thai VietJet can easily feed VietJet-operated flights from Ho Chi Minh and Hanoi. But there are a relatively limited number of other LCCs serving Suvarnabhumi and securing partnerships with full-service carriers will be much more challenging. VietJet is not yet well known or IOSA registered. Most of the main foreign full-service carriers serving Suvarnabhumi already have partnerships with Bangkok Airways and Thai Airways covering domestic and regional connections.

The answer for Thai VietJet could be to focus on point to point international routes, particularly routes with strong leisure traffic. The three initial international markets being targeted – China, India and Myanmar – are all growingly rapidly. Success in these markets requires a heavy reliance on travel agents, a distribution model VietJet is comfortable with as it uses agents extensively in Vietnam and in some of its international markets such as Korea and Taiwan.

Thailand-Myanmar is a competitive market but is more served by full-service carriers despite being price sensitive and consisting of short sectors of less than two hours. Full-service carriers (Bangkok Airways, Thai Airways/Thai Smile, Myanmar Airways International and Air Bagan) currently account for 60% of seat capacity between Thailand and Myanmar. Thai AirAsia, Nok Air and Golden Myanmar account for the 40% share from LCCs. 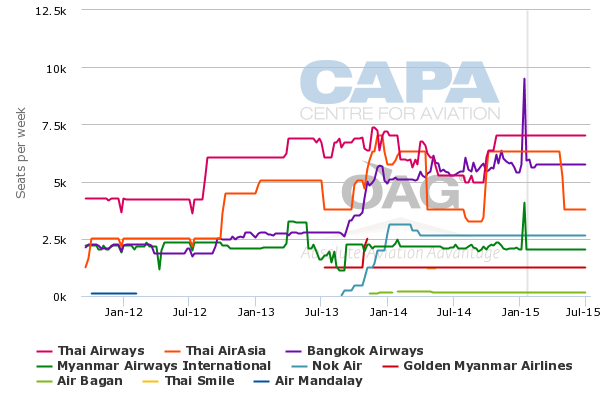 VietJet has been keen to establish a presence in Myanmar for some time. The group looked closely at establishing a joint venture in Myanmar – either by acquiring a stake in Golden Myanmar or starting a new LCC.

VietJet has wisely decided against pursuing a Myanmar affiliate for now, recognising the market is oversupplied and has infrastructure limitations. But serving Myanmar from Bangkok is logical as the group would be able to test out the market without investing heavily. VietJet could also serve the small but growing Vietnam-Myanmar market by offering connections via Bangkok.

India could also be appealing as Bangkok is an ideal transit point for serving the emerging Vietnam-India market. There are currently no non-stop flights between Vietnam and India although India’s Jet Airways began serving Ho Chi Minh in Nov-2014 via Bangkok. Thai VietJet will use the same website and reservation system as VietJet Air, providing a seamless experience for passengers connecting between the two carriers. The Thai VietJet livery is also identical to its Vietnamese sister carrier, with the only difference a small Thailand flag on the fuselage.

The Thailand-India market is much larger and more competitive. But LCCs only account for about 15% of seat capacity between the two countries, providing a potential opening for Thai VietJet. Thai VietJet is already gaining experience in serving India through its existing charter service to Gaya. 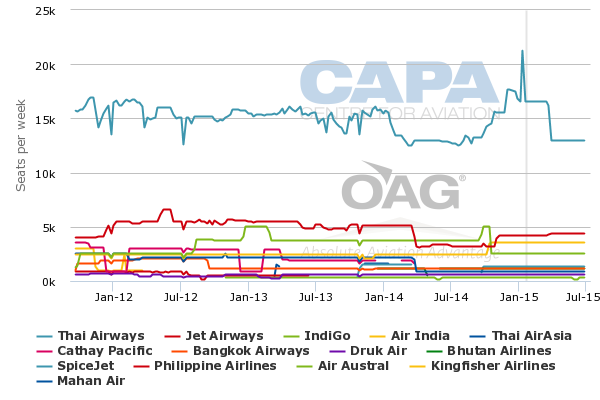 VietJet is keen to compete in Thailand-China market

Thailand-China is also a large and highly competitive market but has huge potential for further growth. There are over 20 airlines that currently operate non-stop scheduled flights from Thailand to China, according to OAG data. But only three are LCCs – Thai AirAsia, Spring Airlines and Lucky Air – accounting for a combined 20% share of total seat capacity.

Thai VietJet would not be able to serve China in its initial phase due to a new Chinese regulation requiring foreign carriers to be in operation for six months before flying into China. This requirement could partially explain Thai VietJet’s decision to initially operate domestically. Approvals for other international markets would also be easier once the airline is already operating domestically.

Thai VietJet may end up competing more against Thailand’s smaller leisure carriers than LCCs. Thailand has several niche leisure carriers such as Orient Thai, City Airways and Jet Asia Airways. China and other North Asia markets are the main focus of these carriers, some of which are growing rapidly.

Overall Thailand has about 20 airlines with over half operating fewer than five aircraft. Thai VietJet will also be small – at least in the initial phase – but has the benefit of leveraging its much larger parent company. Thai VietJet is sourcing its aircraft from VietJet and has been sending its crew, staff and executives to Vietnam for training.

Thailand carriers ranked by fleet size: as of 20-Jan-2015

Thai VietJet could still emerge as a major competitor in Thailand’s domestic market. But an international focus is sensible given the intense competition domestically.

While VietJet continues with a domestic focus in Vietnam, Thailand is a different market requiring a completely different strategy. Carving out a niche in a crowded and highly competitive market like Thailand is not an easy task. The attraction is the high potential growth in the market, but this is not a straight line expansion. If Thai VietJet maintains its initially conservative approach it could end up emerging as a successful niche player. Aggressive expansion could be very painful.