Thailand continues to be an extremely challenging market with all four of Thailand’s main carriers reporting losses for 3Q2014. Combined losses in 3Q2014 at Thai Airways, Bangkok Airways, Nok Air and Thai AirAsia were about USD150million on revenues of about USD1.85 billion, continuing a negative trend which started in 2Q2014.

Thailand’s international market has been significantly impacted by political instability, which started in late 2013 and reached its apex in 2Q2014. Meanwhile the domestic market has been impacted by overcapacity, driven by rapid expansion from Thailand’s three low-cost carriers and a slowdown in the local economy.

The pace of recovery in Thailand’s economy and tourism sector has so far been slower than anticipated. There should be some improvement in 4Q2014 but a full recovery is not likely until at least 2015.

All four publicly traded Thai airline groups, which account for about 60% of total seat capacity in Thailand, have been unprofitable in both 2Q2014 and 3Q2014. Only Bangkok Airways, which began trading in early Nov-2014, has been profitable over the first nine months of the year. Bangkok Airways will likely be the only airline group in Thailand to be profitable for the full year – albeit modestly.

Thai Airways, which generates over three times as much revenue as the other three airlines combined, has been hardest hit. Thai Airways was already struggling and was the only airline among the four that was unprofitable in 2013. The sudden drop in inbound demand caused by Thailand's political instability exacerbated its situation, necessitating a restructuring which was already overdue.

Thai has been the only Thai carrier to cut capacity in 2014, a sensible move given the challenging market conditions and its predicament. But the capacity cuts have come at the expense of market share as Bangkok Airways, Thai AirAsia and Nok Air have all continued to expand rapidly. (The Thai Airways Group owns about a 40% stake in LCC Nok Air, which completed its own initial pubic offering in 2013.) 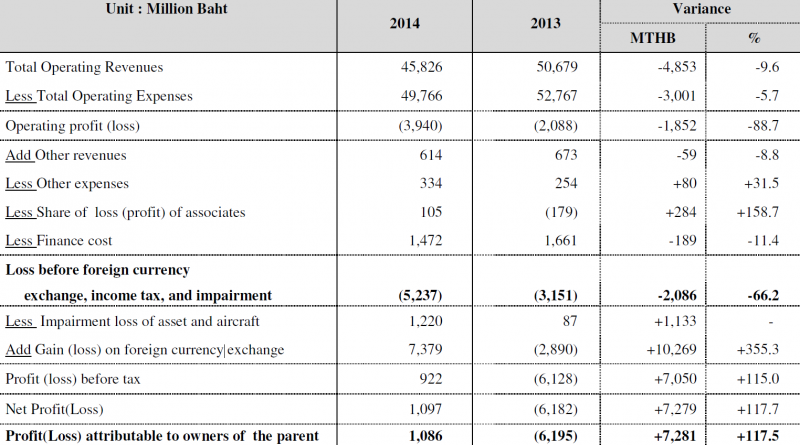 The operating loss represents an improvement compared to 2Q2014, when Thai posted an operating loss of THB6.39 billion (USD200 million). This is an encouraging sign but Thai still faces a long uphill climb if it is to succeed at returning to profitability.

Thai was profitable in 2012 but has been consistently unprofitable since 2Q2013. The clear low point was in 2Q2014 as demand plummeted when the military took over in a coup and implemented a curfew in Bangkok in attempt to restore stability.

The situation stabilised significantly in 3Q2014 and Thailand’s tourism sector is starting to recover, aided by stimulation efforts including the temporary waiver (for at least three months from Aug-2014) of visas for China and Taiwan. Taiwan and China are two important source markets that have been seen bigger drops in tourist arrival figures (29% for Taiwan and 17% for China) through the first nine months of 2014 than the 10% overall drop. The speed of recovery however has been painfully slow and Thai’s load factor has continued to fall.

Unlike other Thailand-based carriers, Thai was able to improve yields slightly (less than 1%). But maintaining yield has come at the expense of passenger numbers and load factor.

The group’s revenues were also down 10% in 3Q2014 to THB45.826 billion (USD1.43 billion) including an 11% drop in passenger revenues to THB37.903 billion (USD1.18 billion). Thai stated it has seen the biggest decline in Asia and Australia. It pointed out that visitor arrivals at Bangkok’s two airports were down 16% in 3Q2014, with arrivals from other Asian countries accounting for most of the reduction.

The European market has held up better, with visitor numbers from Europe still up 2% through the first nine month of 2014. But Thailand is also facing intensifying competition in this market, primarily from Middle Eastern carriers.

Thai Airways implemented a turnaround plan during 3Q2014 which is aimed at reducing costs – partially through jobs cuts – and improving yields. But a bigger picture review of Thai’s business and long-term strategy is still ongoing. This review is expected to finally be completed by the end of 2014, leading to implementation during 2015.

The group’s new president, Charamporn Jotikasthira, will be tasked with finalising and implementing the new business plan and strategy. A former president of the Stock Exchange of Thailand, Mr Charmporn was appointed on 12-Nov-2014 and is expected to join the carrier within the next few weeks. Mr Charmporn will replace Thai’s interim president, Air Chief Marshal Siwakiat Jayema, who took over on 1-Jul-2014 along with other military officers as part of the new government’s attempt to turn around the ailing flag carrier.

Thailand’s largest low-cost carrier, Thai AirAsia (TAA), was expected to report significantly improved results in 3Q2014 compared to 2Q2014, which had been TAA’s first loss in 18 quarters. Instead there was only a slight narrowing of the carrier’s operating loss compared to the previous quarter. 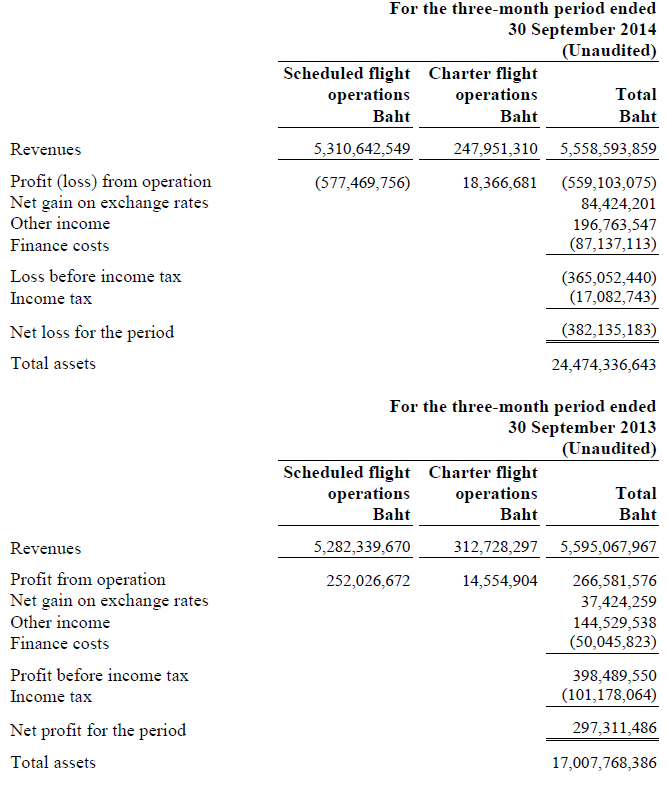 TAA may be able to return to profitability in 4Q2014 as the last quarter is a peak travel period in Thailand. But a full-year loss for 2014 is likely. TAA has not had an annual loss since 2009, when it reported both an operating and net loss. 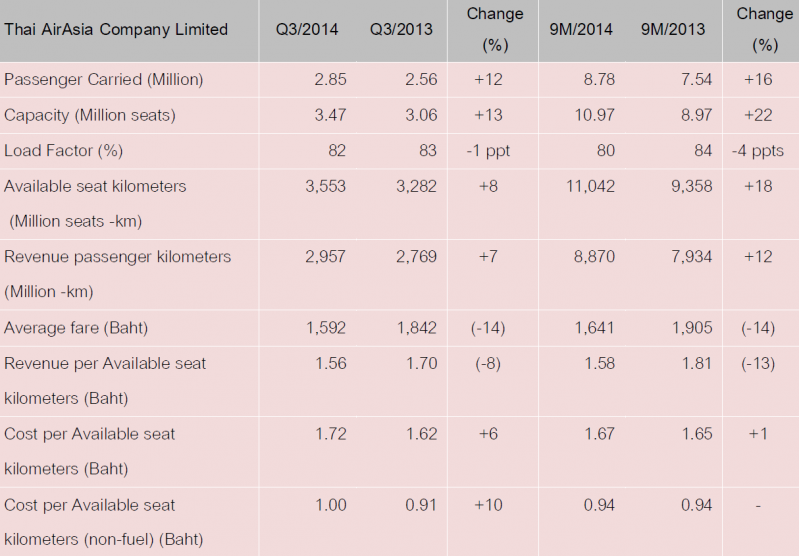 The higher seat increase compared to ASKs reflects an increased focus on the domestic market. As CAPA previously outlined, Thai AirAsia has directed most capacity increases in 2014 to the domestic market as domestic demand held up relatively well during the political instability. But yields in the domestic market have been under pressure as TAA was joined by its two Bangkok Don Mueang-based rivals, Nok Air and Thai Lion Air, in adding domestic capacity.

Meanwhile international demand has been impacted by the political instability with visitor numbers to Thailand down by 10% through the first nine months of 2014. Regional travel has been most impacted as visitor numbers from other East Asian countries dropped by 16% in the first nine months of 2014, according to Thailand Department of Tourism data. 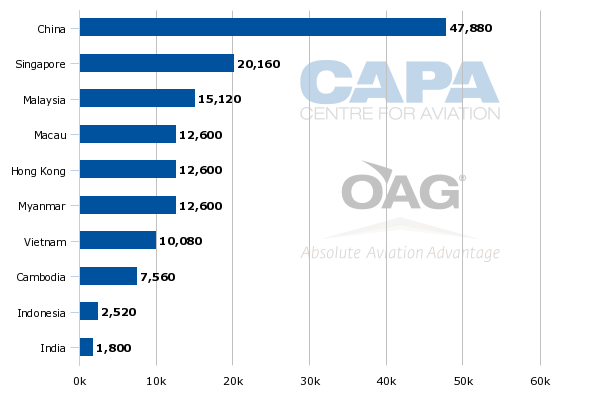 Nok Air’s loss was also significantly higher than anticipated, another indication of the slower than expected pace of recovery. Nok’s 3Q2014 loss was even higher than its loss from 3Q2013, a reflection that the overcapacity situation in the domestic market has worsened, offsetting any improvement in demand as the political situation stabilised.

Nok Air incurred a net loss of THB353 million (USD11 million) for 3Q2014 compared to a net profit of THB245 million (USD8 million) in 3Q2013. The net and operating figures were nearly identical. 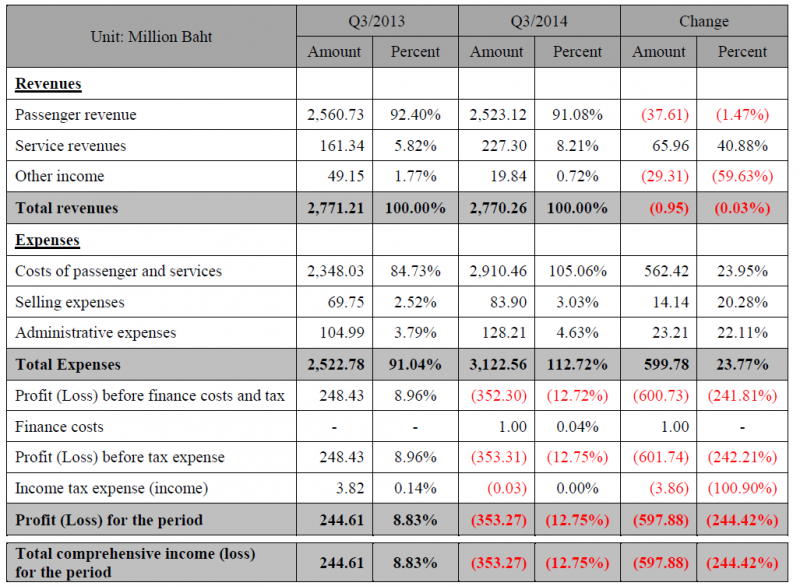 The loss at Nok is more than double the loss of 2Q2014, when Nok incurred a loss of THB160 million (USD5 million). Nok had been optimistic of an improvement in 3Q2014, indicating in Aug-2014 that it was starting to see some signs of a recovery.

Nok stated in its 14-Nov-2014 results announcement that the pace of economic recovery was slow in 3Q2014 although there was increased consumer confidence in Thailand compared to 2Q2014. Nok also noted that while Thailand’s tourism sector “started to pick up” the increase was below expectations.

Nok relies more on local demand compared to TAA as it is entirely a domestic carrier with the exception of one international route, Bangkok to Yangon. International services accounted for only 3% of Nok’s revenues in 3Q2014. Nok’s small international operation incurred a loss of THB19 million (USD600,000) on revenues of THB77 million (USD2.4 million).

Nok pointed out that the domestic market is continuing to experience “intense airfare competition due to excess capacity and price campaign to stimulate demand in low season”. Nok has faced increased competition over the last few months on some of its biggest routes as Thai Lion launched four new domestic routes from Don Mueang and Thai Smile began serving three domestic routes from Don Mueang. Thai Smile previously operated entirely from Bangkok Suvarnabhumi, which is the hub for Thai Airways and Bangkok Airways and is used by most foreign carriers.

Nok’s passenger revenues decreased 1% in 3Q2014 to THB2.523 billion (USD78 million) despite a 22% increase in RPKs and a 29% increase in passenger numbers. As with TAA, Nok has had to engage in deep discounting to stimulate demand and fill up the extra capacity. Unit revenues (RASK) were down 16% in 2Q2014 and passenger yield was down 19%.

Nok’s average load factor was up 0.9ppts to 84.2%. But the high load factor clearly came at the expense of yields. 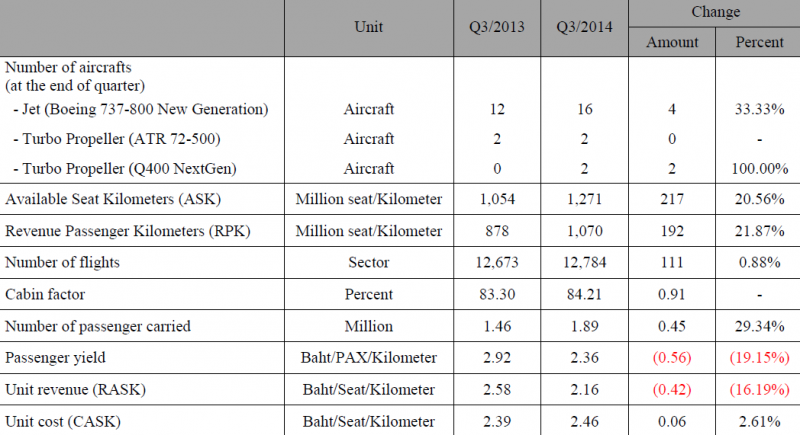 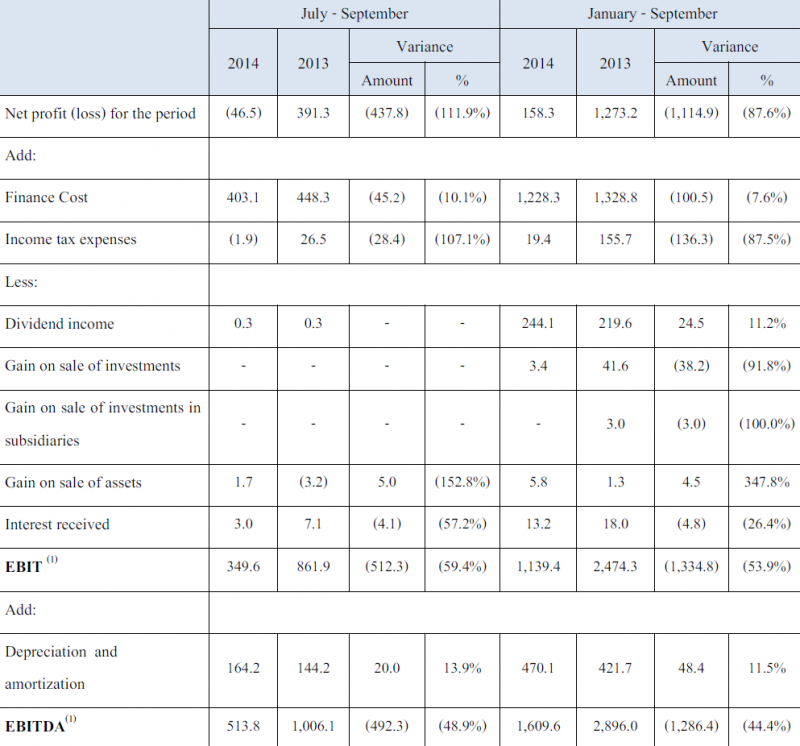 Group revenues were up 2% to THB5.284 billion (USD165 million) despite an 11% drop in passenger numbers to 950,000. The company generated THB4.197 billion (USD131 million) in passenger revenues in 3Q2014, representing an increase of less than 1% compared to 3Q2013. About 5% of the company’s revenues comes from its ground handling joint venture, 4% from its catering subsidiary and about 2% from its airport business (Bangkok Airways owns three regional airports).

While Bangkok Airways’ loss was modest it has clearly been impacted by the drop in visitor numbers. The airline has been expanding rapidly which exacerbated the situation as the expansion has come as demand has softened.

Bangkok Airways increased ASKs by 42% in 3Q2014 but was only able to increase RPKs by 18%. As a result its average load factor plummeted by 11.7ppts to 57.2%. Passenger yields also dropped by about 9%.

The low load factor and drop in yields are not necessarily alarming as Bangkok Airways enjoys a large yield premium compared to other short-haul carriers as it focuses on feeding international full-service carriers. Bangkok Airways load factors are also typically low and it tries to steer away from competing with LCCs. But clearly a load factor below 60% is disappointing.

Bangkok Airways stated in its 12-Nov-2014 earnings statement that visitor numbers from several key source markets – including China, Hong Kong, Japan, Malaysia and the US – increased in 3Q2014 compared to 2Q2014 but that the increase was lower than predicted. While Bangkok Airways serves only two of these five markets it is impacted by overall visitor numbers because it flies visitors from all over the world around Thailand and to neighbouring regional destinations, particularly Cambodia, Myanmar and Laos (its three largest international markets). Bangkok Airways warns that it expects Thailand’s tourism sector will only improve marginally in 4Q2014.

As CAPA previously highlighted, Bangkok Airways was the only Thai carrier that was profitable in 1H2014. Despite losses in 2Q2014 and 3Q2014, it was still in the black for the nine month period.

Even with a lower than usual peak season in 4Q2014, Bangkok Airways will likely remain in the black for the full year. This would give it the distinction of being the only Thai airline group to be profitable in 2014 – a noteworthy accomplishment given the extremely challenging market conditions that all carriers have confronted this year in Thailand.

Market conditions in Thailand will remain challenging in 2015

Pressure on profits across Thailand’s aviation sector will likely continue in 4Q2014 and at least the first part of 2015 given the slow pace of recovery. Even if the pace of recovery improves in 2015 the market will remain challenging given the additional capacity committed to by several of the carriers.

The domestic market is unlikely to see any improvement to the current overcapacity situation as all three existing LCCs are in expansion mode and a fourth LCC, Thai VietJet Air, is planning to enter the market by the end of 2014.

Thailand’s short-haul LCC fleet is likely to expand by about 30 aircraft in 2015, pushing the total above the 100 aircraft mark. Bangkok Airways is also expected to continue fleet expansion, using proceeds from its recently completed IPO.

Meanwhile Thailand’s medium-haul international market, particularly Japan and South Korea, will become more competitive with the expansion of Thai AirAsia, which launched in mid-2013, and the planned Jan-2015 launch NokScoot. Thailand will become the first country in the world with two medium/long-haul LCCs while the upcoming launch of Thai VietJet will give the market four short-haul LCCs compared to only two one year ago.

The LCC expansion comes at an already challenging juncture, particularly for Thai Airways. Thailand will certainly be a market to watch as 2015 unfolds.