Spring Airlines, China's largest and most successful low-cost carrier, will follow in the footsteps of AirAsia, Jetstar and Tiger Airways in establishing a pan-Asian strategy to have subsidiaires outside its home market. The first will be in Japan. While Japan already has local AirAsia and Jetstar subsidiaries and Spring's strategy may appear to be merely copying other carriers' strategies, Spring's strategy is guided by other objectives.

Airlines in mainland China are heavily regulated and direct competition is limited. Establishing a foreign subsidiary, however, will give Spring more transparent regulatory frameworks to work with in order to serve international Chinese routes. The foreign bases also allow flights to third countries. With China to become the largest market for LCCs, Spring has the potential to capitalise internationally on its local awareness as well as offer access to China's domestic network, which remains something of a holy grail for AirAsia and Jetstar. But Spring will face the challenges of sophisticated IT and ancillary revenue, which AirAsia and Jetstar have a large start on.

Spring has a growing presence in Japan, having launched its first service in Jul-2010 to Ibaraki prefecture, about 2.5 hours outside of Tokyo. Expansion has occurred to Takamatsu, Saga (in the Fukuoka area) and most recently Tottori. All flights depart from Spring's hub at Shanghai Pudong and are less than daily (Ibaraki six times weekly, Saga four times, Takamatus three times and Tottori twice weekly). Spring has flagged the possibility of expanding to Kumamoto later in 2012 as well as to Okinawa (Naha) in 2013.

Spring's selection of second and even third tier cities represents the enormous potential for new routes between Japan and China. China is the second largest international market for Japan while Japan is China's third largest (including Hong Kong). Yet capacity is heavily tilted towards trunk routes. A total of 69% of seats between China and Japan are from either Beijing and Shanghai, while on the Japanese end 84% of seats go to just three cities: Tokyo, Osaka and Nagoya. 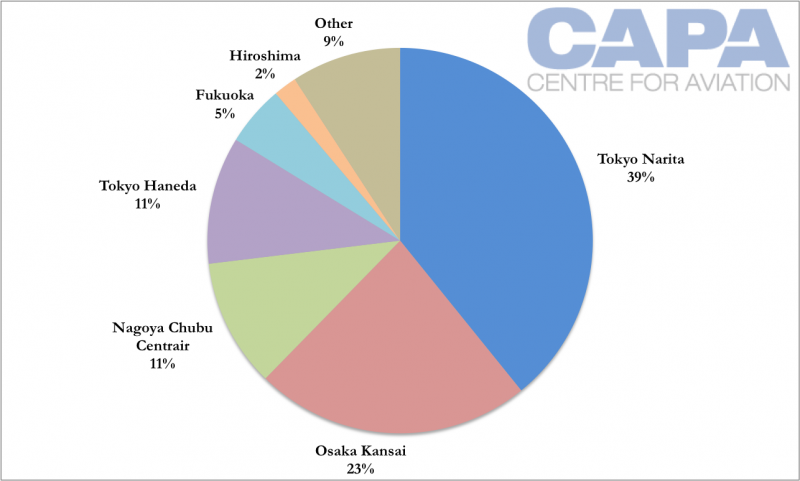 Spring's selection of Japanese cities, however, also reflects difficulties in securing access to key cities; the carrier hopes to one day serve Tokyo Narita – this at a time most carriers are trying to progress from Narita to Haneda.

The Japanese base (undecided but possibly at Narita) will enable Spring to more easily serve other Chinese cities. "If we can set up a company in Japan that can pick up passengers from China, that would be good for us," Spring CFO Johnny Lau said at CAPA's Financing the Asian Revolution in Macau on 7-Sep-2012. In addition to any Chinese regulatory issues (outside of sheer air rights; China and Japan recently agreed to an open skies agreement) on further international expansion, flights on Spring's Chinese AOC from cities other than in its bases/focus cities – Shenyang and Shijiazhuang – could require a branch company to be established, adding costs.

While a Japanese affiliate will have higher costs on China-Japan routes than Spring's Chinese AOC, the affiliate may be the only way to access those markets. Additionally, while Spring is lean compared to Chinese legacy carriers, government restrictions – such as personnel structure – have prevented Spring from achieving as much efficiency as it would like or would be possible in other markets; it averages approximately 160 staff per aircraft. So Spring may not be as low-cost on the labour side as one would assume for a Chinese carrier (plus salaries are rising across the board at Chinese carriers, often with double-digit increases).

Mr Lau said Spring will also have a domestic network. This is partially due to the regulatory time required to be approved for international services, with China typically taking longer than other countries. The short and medium term focus for the Japanese subsidiary will be domestic services and flights to China with Mr Lau saying that after a few years the Japanese AOC will also consider international flights to countries other than China. A launch date is not set yet, but the ownership of the affiliate will include a minority shareholding from Spring (as is common elsewhere, majority foreign ownership is not permitted) with the remaining held from non-airline Japanese companies. AirAsia Japan and Peach Aviation have ownership ties to ANA while Jetstar Japan has ownership ties to JAL.

Spring has discussed a Japanese affiliate for over a year but no longer holds a first move advantage. "We are one year late in Japan but that may not be bad," Mr Lau said.

Peach Aviation launched in Mar-2012, Jetstar Japan in Jul-2012 and AirAsia Japan in Aug-2012. Mr Lau expects Spring will use the extra time to observe current Japanese LCC trends. Even with three new LCCs, Japan has enormous room for further stimulation, and the three existing LCCs may be constrained less by the market than by aircraft availability; AirAsia Japan and Jetstar Japan will have to contend with other group affiliates for their parent company's order books, which may be large but once spread out across the subsidiaries are less eye-popping.

Subsidiaires in other countries may be considered

The Japanese base may mark the start of subsidiaries elsewhere in Asia. "We haven't made up our mind if we want to set something up in Korea, Thailand, the Philippines. But it would make sense," Mr Lau said.

South Korea is mainland China's second largest source of arriving seats, after Hong Kong, which is primarily transfer, not local, traffic. There is plenty of room for fare stimulation in South Korea, but bilateral restrictions have limited the access for Korean carriers, which include a crop of LCCs (including Jeju Air) but which have relatively high cost bases as they do not think Koreans are ready for no-frills LCCs. 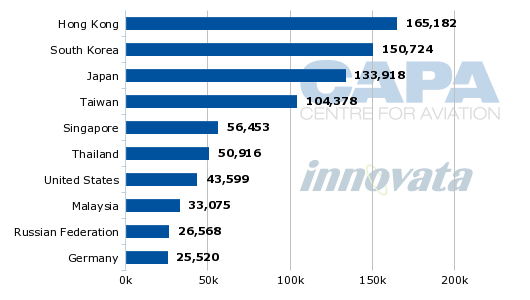 Further LCC competition out of Thailand is expected as Thai AirAsia expands following its IPO. China will be a large target, and because its more northern geography compared to AirAsia's Malaysia and Indonesia bases enables it to reach more Chinese cities, the AirAsia Group will consider having Thai AirAsia reach cities with A320s before AirAsia X A330s are considered for deployment. Whereas AirAsia Berhard (Malaysia) traditionally opens a new city first, Thai AirAsia was the first AirAsia affiliate into Chongqing and will be the first into Wuhan and Xian, when services are launched from Bangkok.

Nok Air, which Thai Airways has a minority stake in, also plans to pursue international expansion with China its most likely first international destination. Nok is now only a domestic LCC but began operating charters to China earlier this year. Thai Smile, the newly-launched hybrid unit of Thai Airways, is also considering cities in mainland China.

The Philippines is not currently a top 10 country based on seats into China, but this is partially a result of the two countries' dispute over islands, a political ramification that has led to China issuing a travel warning to the Philippines and travel agencies, which account for a large portion of bookings, cancelling tours. LCCs from the Philippines see large room for services to mainland China once the political situation is resolved. But outside of the China-Philippines market, the Philippines is experiencing over-capacity and consolidation is likely. Spring's prospects for a Filipino AOC could depend on how much its focus will be on the Chinese market versus other international markets.

Also in the top 10 list for short-haul markets outside of greater Hong Kong are Taiwan, Singapore and Malaysia. There is tremendous potential for traffic growth between mainland China and Taiwan but the market is currently heavily restricted with each side handing out specific routes to carriers. Besides mainland China, Taiwan is seeing some liberalisation and the absence of homegrown LCCs – which is stirring interest at home – is attractive to a prospective new entrant.

Singapore and Malaysia are nearing LCC saturation and are large hubs for AirAsia, which has a cost base difficult to undercut. AirAsia is looking to establish a Singaporean AOC (its large presence in Singapore is currently virtual as the group only has flights from the AirAsia affiliates in Indonesia, Malaysia and Thailand) which would enable the group to launch flights from Singapore to China, a market now well served by LCCs Jetstar Asia and to a lesser extent Tiger. Indonesia's Lion Air announced on 11-Sep-2012 plans to form a joint-venture to establish Malindo Airways in Malaysia, although Lion had previously made similar JVs that did not materialise with service.

Spring's Japanese subsidiary will use 737NGs

Spring has so far been an all-Airbus operator with over 30 A320s, but Mr Lau said Spring will use Boeing 737NGs for its Japanese operation. Noting that Spring has "been satisfied with the Airbus service in China", Mr Lau said Spring expects that Boeing's longer history in Japan and deeper penetration than Airbus will yield operational advantages. "If you want to find pilots, engineers, all kinds of support, Boeing seems to be a better choice," Mr Lau said.

Selection of Boeing aircraft may also allow Spring to not be dependent on a single airframer, a practice China's "Big 3" – Air China, China Eastern and China Southern – follow. Spring in Aug-2012 took delivery of its 33rd A320 and Mr Lau affirmed Spring still intends to nearly double that figure by having 60 A320s in mainland China by 2015. Spring's pending IPO will raise funds for the fleet expansion, but Mr Lau cautions any brakes to be applied will come not from Spring but rather the Chinese government, which must approved aircraft orders.

Spring launched with a reliance on leased aircraft due to lower upfront costs and currently has approximately 70% of its fleet leased and 30% owned. Mr Lau expects that ratio to shift, with 40% of aircraft being owned by the end of 2012. Its medium and long term order book is unclear, as Spring may elect to stop purchasing the "classic" version of the A320 and instead wait for the A320neo, Mr Lau said.

The aircraft will continue Spring's growth, and the carrier in Aug-2012 met China's aviation regulator, the CAAC, to formally begin the process of establishing a branch company in Kunming to support a base there. The branch company, the establishment of which is followed by other airlines in various markets in China, gives benefits beyond the right to fly.

Mr Lau remarked that a base in Kunming would allow Spring to access markets in India and west Asia while a possible base in Guangzhou could allow Spring to better serve Southeast Asia. Spring's traffic is currently point-to-point but it is considering how it can support connecting services, and even, in the long term, sixth-freedom traffic. Spring is realising the tremendous geography China offers to efficiently serve different parts of the world.

Those hubs, along with subsidiaries in other Asian countries, could make Spring a formidable contender in pan-Asian networks. AirAsia and Jetstar have the lead, but much potential is waiting to be unlocked.