One of the highest growth rates in North Asia in 2013 will be from South Korea's Asiana, which is projecting a 9% increase in RPKs. This compares to 4% RPK growth at Korean Air and modest growth from All Nippon Airways and Japan Airlines. Many Chinese carriers will have similar or higher growth, but notably Air China will be lower as it runs out of slots.

The focus in 2013 for Asiana, globally the 54th largest airline based on capacity and sixth largest for intra-Asia international capacity, is regional flights, increasing capacity to cities including Chongqing and Yangon and launching new services to Denpasar and Jakarta. This traffic will help feed its long-haul network, due to commence notable expansion beginning in 2014 as A380s replace 777-200ERs, facilitating their re-deployment to new routes.

In sheer size Asiana is about 35% smaller than competitor Korean Air, but in strategy Asiana is far more conservative and has largely yet to break out of the comfortable Asia-Europe-North America operating sphere the way Korean Air has, which is also pursuing partnerships.

Yields declined by 1% in 2012 despite the addition of fuel surcharges but Asiana hopes to post 4% yield growth in 2013. (2012 was affected by a territorial dispute between Japan and Korea, sagging passenger demand.)

Japan and China have the highest yields (but also operating costs) followed in a distant third place by the CIS and then long-haul markets and Southeast Asia.

In 2013 Asiana will add Jakarta and Denpasar to its destinations while increasing capacity to Chongqing, Chicago, Yangon as well as other destinations in China and regional Asia.

Indonesian capacity is notable as the country undergoes high growth although primarily in the domestic market. Asiana will likely have notable Indonesia-US sixth freedom traffic, given lack of direct options and Garuda Indonesia being unable to codeshare with US carriers owing to FAA restrictions. 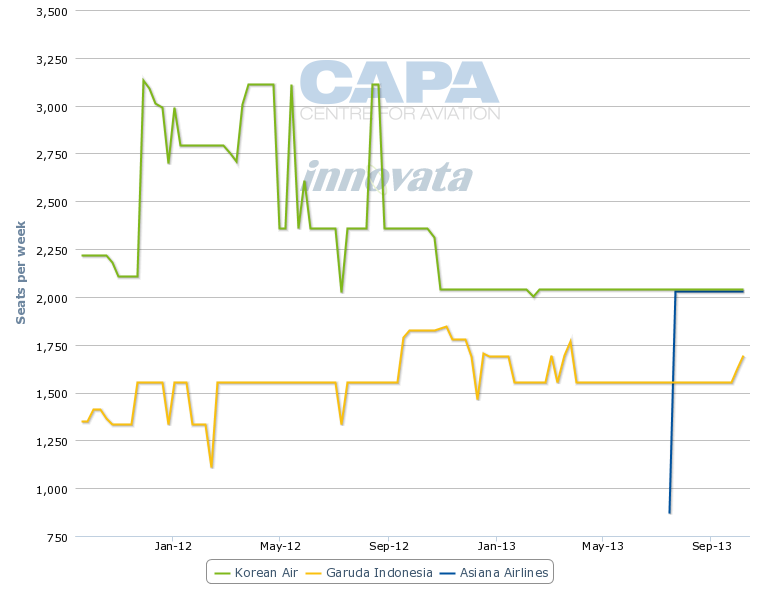 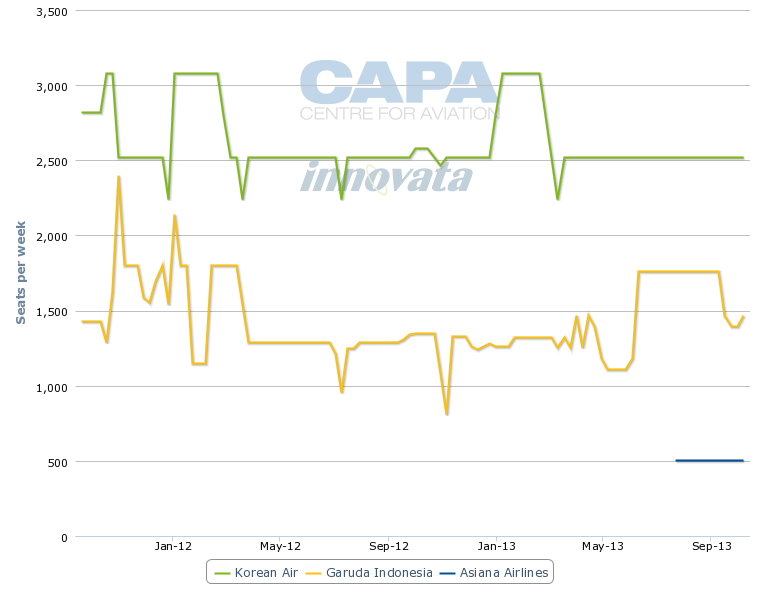 Asiana initially entered the Yangon market in late 2012 as a seasonal service from Dec-2012 to Mar-2013 compared to Korean Air's daily year-round offering which was launched in Sep-2012. But Asiana has extended its Seoul-Yangon service and in Jul-2013 will increase Yangon capacity from two weekly to four weekly 767-300 services until Sep-2013. 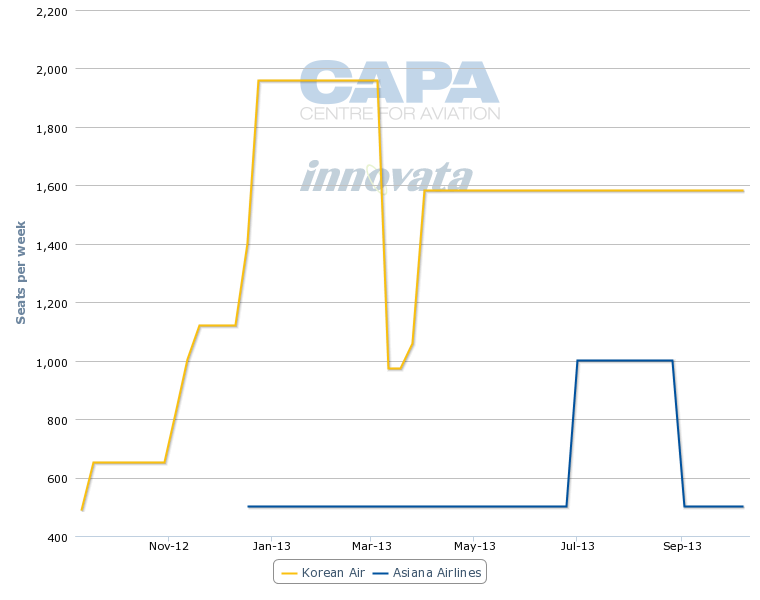 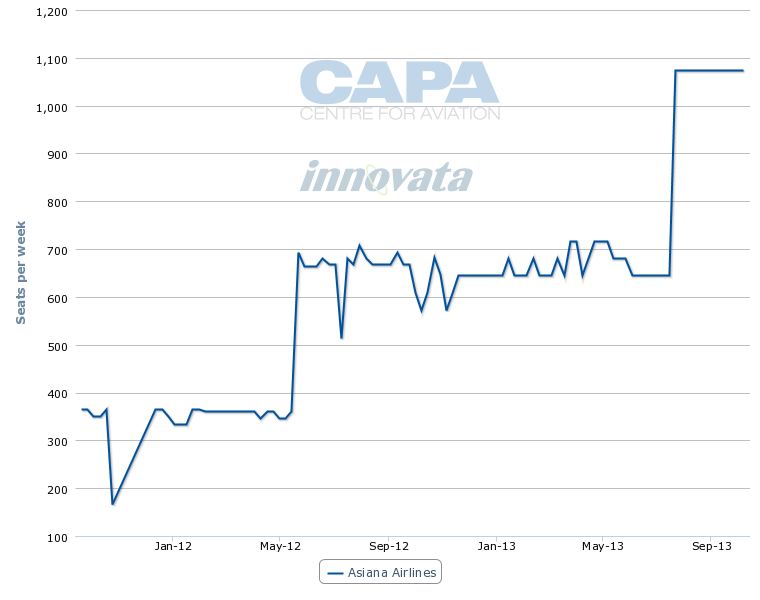 Additional capacity to Chicago coincides with Asiana taking delivery of another 777-200ER with updated premium cabins, part of its push to increase premium revenues (like at Korean Air) and grow corporate contracts from 855 in 2012 to about 900 in 2013. Chicago is Asiana's only US destination which is not also served by Korean Air. 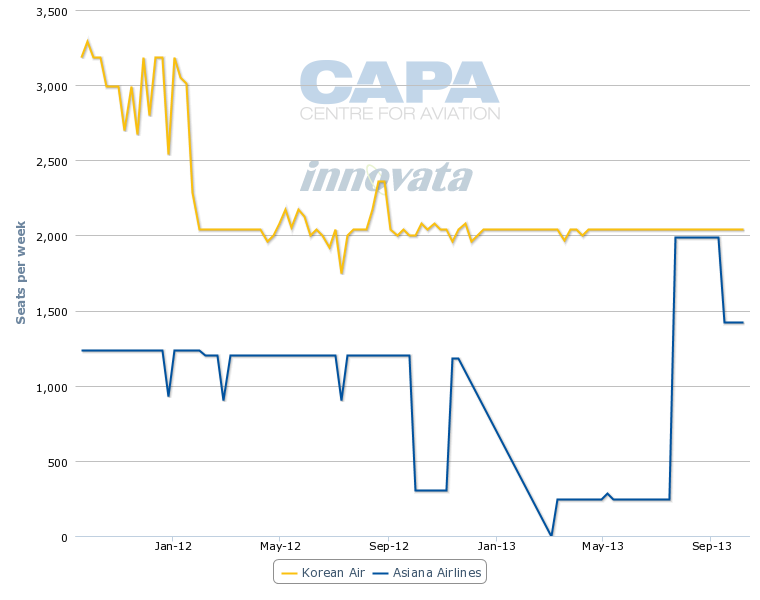 North Asian countries typically have multiple long-haul carriers but with one distinctly larger, and this is true where Korean Air is larger than Asiana by about 35%. But unlike other comparisons, Asiana is consistently smaller than Korean Air.

Asiana is only larger than Korean Air in the very small region of Central Asia, where Asiana has two destinations (Almaty in Kazakhstan and Tashkent in Uzbekistan) while Korean has just one (Tashkent). Asiana also has a partnership with Kazahkstan's Air Astana, which uses Asiana and Seoul for offline services to Japan and the west coast of the US. 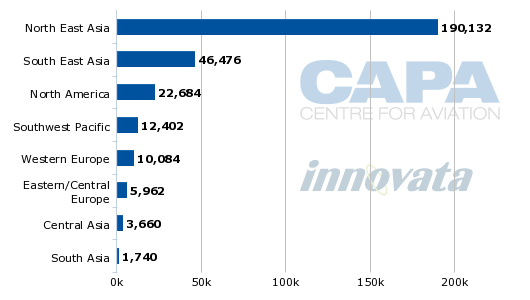 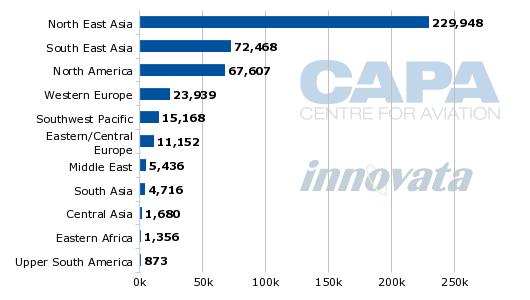 There is some level of a correlation between ASKs and revenue by region for the carriers. 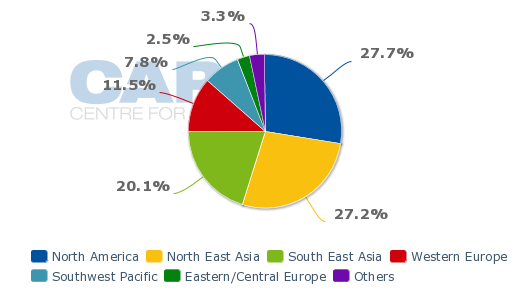 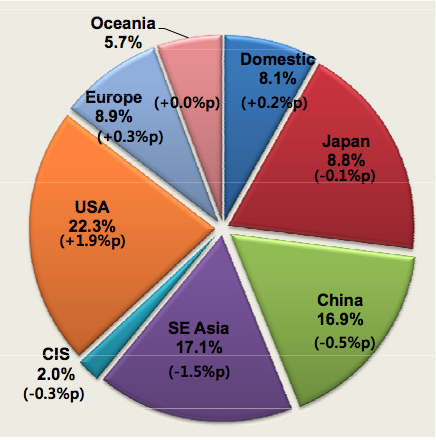 Note: Asiana has not made graph to scale
Source: Asiana 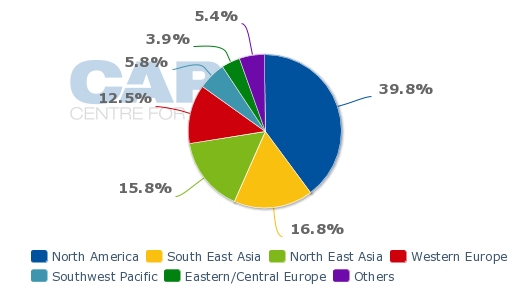 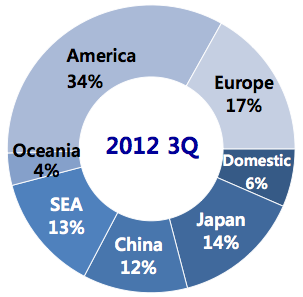 Korean Air's capacity and revenue is heavily tilted towards North America (which has strong long-term growth and yield prospects) while Asiana is fairly well balanced with China, Southeast Asia and North America each having a 17-22% share of revenue. This has potential drawbacks: North Asia LCC competition is increasing and dependence on this market would be unwise; over the last five or so years LCCs have gone from a 7% domestic capacity share in South Korea to 30%. This has been at the expense of Asiana and Korean Air. 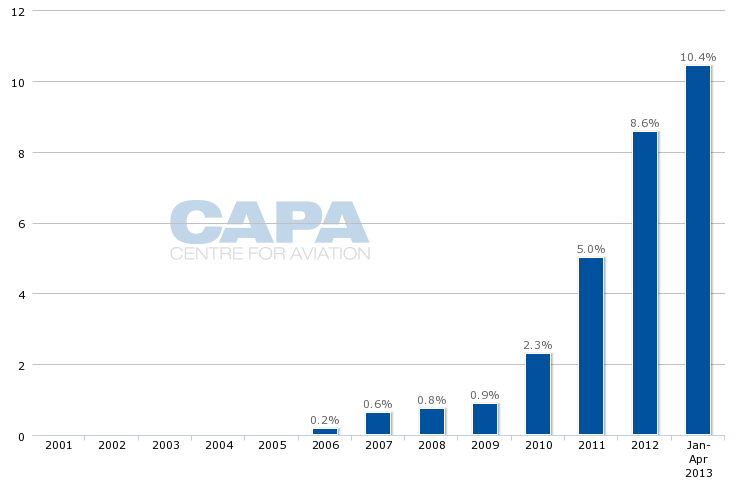 *to month denoted
Source: CAPA – Centre for Aviation and OAG 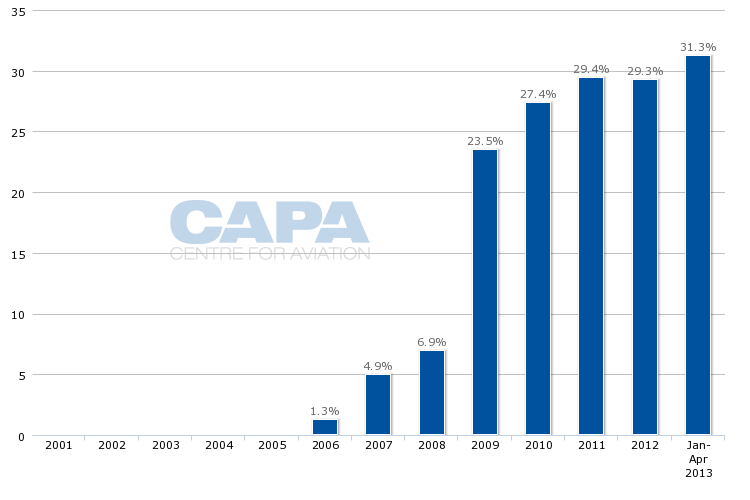 *to month denoted
Source: CAPA – Centre for Aviation and OAG

International capacity is seeing rapid growth of LCCs, if from a small base, which in 2013 account for about 10%, up from 2% in 2010. This will increase with further growth from Japanese LCCs (including Jetstar Japan, which has not entered Korea or any international market, unlike AirAsia Japan and Peach) as well as the forthcoming entrance of AirAsia X between Kuala Lumpur and Busan (complementing Kuala Lumpur-Seoul Incheon) and possible new long-haul routes from Bangkok into South Korea from AirAsia X's new Bangkok base.

Singapore-based Scoot will launch service to Seoul Incheon via Taipei. On the cards – for 2013 or early 2014 – could be LCC capacity between Hong Kong and Korea as Jetstar Hong Kong launches and Hong Kong Airlines weighs up a transformation of Hong Kong Express into an LCC.

Asiana understandably posted smaller revenues and profits in 2012 than Korean Air, but did so at a slightly higher operating margin (3.0%) than Korean Air (2.2%). 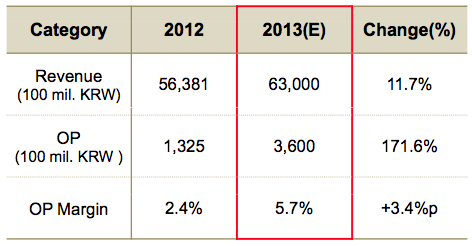 Korean Air targets new markets and partnerships – Asiana is not

It is not just in size where Korean Air is showing strength. It is in strategy, too.

Korean Air is one of the few Asian carriers to serve Latin America, and the only one amongst Japanese and Korean carriers. JAL used to serve Sao Paulo via New York (it now relies on codeshare partners). Korean Air still serves Sao Paulo via Los Angeles with three weekly 777-300ER flights and plans to add Los Angeles-Lima service as well.

Korean Air is also entering new markets in the Middle East (Jeddah and Riyadh, in addition to Tel Aviv), Africa (Nairobi, and maybe soon South Africa) and South Asia (Colombo and Male). Asiana does not have any destinations in the Middle East or Africa and only serves Delhi in South Asia.

Korean Air is also forging partnerships, although this strategy is young and perhaps unrefined. In Apr-2013 it partnered with Myanmar Airlines International and purchased a stake in CSA Czech Airlines. While these arrangements and route networks are not globally leading, they are innovative in Asia, where inertia still holds.

Korean Air has also flagged interest in a trans-Pacific JV with fellow SkyTeam partner Delta Air Lines. Asiana may have a more complex time as its membership in Star yields two trans-Pacific North American partners: Air Canada and United, the latter of which has a JV with ANA, although ANA's high cost base stymies low-cost onward connections from Asia, a key component of the JV. Asiana also has nearly twice the international capacity within Asia than ANA does. 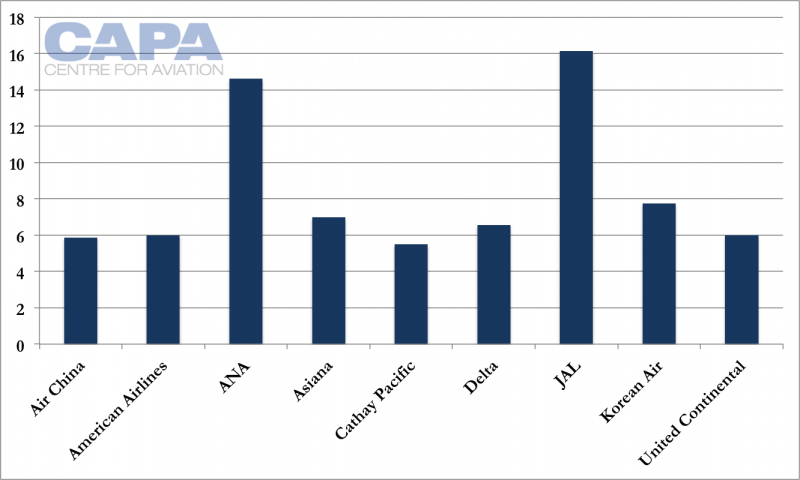 Asiana does suffer from a lack of widebody capacity, although it is taking three new widebodies in 2013 (two A330s, which are used on regional routes, and one 777). A380 deliveries commencing in 2014 will replace 777-200s, allowing for their redeployment. But so far Asiana is targeting new destinations in North America and Europe and not entirely new markets.

Asiana Airlines projected delivery dates for aircraft on order*: as of 22-Apr-2013 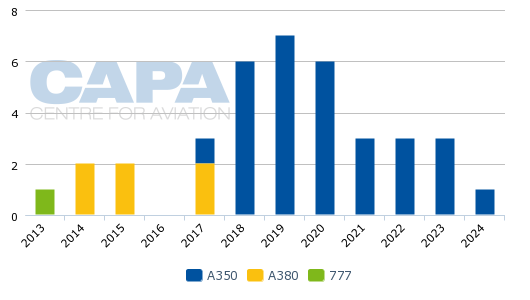 Asiana aims to significantly expand capacity on US routes after it becomes the sixth Asian and second South Korean carrier to operate the A380 in 2014. Asiana has six A380s on order and plans to initially deploy the super jumbo on long-haul routes to Los Angeles and New York as well as on some dense regional routes within north Asia such as Hong Kong, Shanghai Pudong and Tokyo Narita.

Frankfurt is the most likely destination for Asiana’s last batch of A380s, which will not be delivered until 2017. While the carrier does not plan to open any new routes with its A380s, the new type will free up Boeing 777-200ERs to launch new destinations in Europe and North America.

Mr Yoon says the A350s will be used to replace the carrier’s current medium-haul fleet and for growth on routes within Asia-Pacific. He says the first A350 is now slated for delivery in 2017.

With its A350s planned for short and medium-haul routes, Asiana does not yet intend to join several of its peers in using new generation small twin-engine aircraft to open new thin long-haul routes. Asiana should perhaps re-think this portion of its strategy if it is serious in its ambition of becoming a leading global airline.

Asiana only needs to look nearby at Japan where international carriers All Nippon Airways and Japan Airlines are shunning large aircraft and instead opting for medium-sized twins to gain relevance by opening a plethora of new long-haul routes.

See related report: South Korea’s Asiana plans to use A380 to boost capacity to Los Angeles and New York

Positive if underwhelming passenger prospects, but LCC and cargo a worry

Asiana like Korean Air derives about a quarter of revenue from cargo, which has been a sour subject for a number of years. Asiana's cargo division ended 2012 with a 6.8% increase in RTKs on the back of a 4.5% increase in ATKs. That led to a 1.7ppt increase in load factor but a staggering 10.1% decline in yields. This strategy contrasts sharply to Korean Air, which cut capacity, posted an increase in load factor and only a minor 0.6% decline in cargo yield to USD31.3 cents compared to Asiana's cargo yield of USD30 cents.

Asiana's low-cost strategy is also a concern. Its joint venture LCC, Air Busan, has been out-shined by independent Jeju Air and Korean Air's Jin Air. Air Busan operates a large number of significantly loss-making domestic services between Seoul and Busan, which Asiana previously operated. Asiana it seems has yet to come to terms with the Korean high-speed rail, KTX, which will mean that domestic flights on that corridor cannot be profitable. On international routes, Air Busan plays second fiddle to Asiana's interests and is missing opportunities.

Asiana's core business, the passenger segment, has a positive forward projection in the immediate future. But it shows signs of stagnation rather than the innovation, if relative, of Korean Air's opening of new markets and neighbours ANA and JAL using next generation aircraft to open new destinations. Asiana's larger reliance on North Asia and Southeast Asia will turn sour in the next few years if LCCs continue their growth spurt, impacting Asiana's outlook.