Icelandair – the chameleon-like airline with the Viking spirit of adventure

The decision by Icelandair to increase its route frequency on services to and from Glasgow and Manchester (UK) airports for the duration of the Northern Winter schedule 2009-10, by merging them into a circular route, and to connect them to existing trans-Atlantic services, is indicative of the chameleon-like nature of the airline. It also furthers its renowned capacity to operate in at least two diametrically juxtaposed markets at the same time; something it has been doing, in one guise or other, for the best part of five decades.

At one and the same time Icelandair has to cater for:

The third category of passenger is specifically catered for during the winter period (October – March) when the country typically does not receive as many tourist visitors as during the Summer. Daylight hours can shrink to less than six in January and travel outside the main population centres can be difficult. The airline, which represents the tourist board in many markets, has tried to redress the balance with targeted vacation offers, usually short breaks, featuring such diverse attractions as cross-country skiing and snowmobiles, the Northern Lights (Aurora Borealis) and Reykjavik’s (the capital) well documented hedonistic weekend nightlife, as well as by beefing up its presence in the MICE (Meetings, Incentives, Conferences and Events) market.

Nevertheless, with such a small home-based population to call on, the trans-Atlantic transit passengers remain a critical part of the mix in the winter season. In comparison, during the summer season, a precise yield management effort is needed to balance high seat demand from those transatlantic passengers with the much higher-yielding tourists to Iceland itself.

Icelandair has additionally gained much experience of how to package and promote stopover options where trans-Atlantic passengers typically stay for a one to three night period and take structured tours offered by an associated company that end at Keflavik Airport in time for their departure flight, at an all-in price. 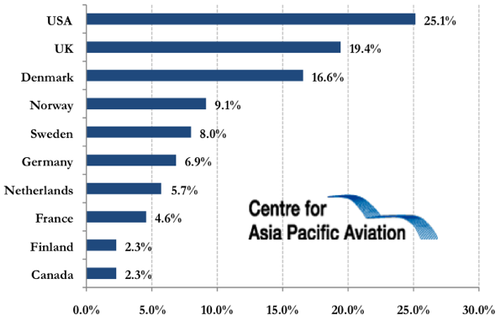 Arctic transfers on the tarmac

That experience has been gained over a period of almost 50 years since Loftleidir, one of Icelandair’s predecessors, commenced low fare trans-Atlantic operations with Canadair 44 and later Douglas DC8 equipment, initially out of Luxembourg via Iceland, and becoming arguably the world’s first LCC, pre-dating Laker, People Express and even Southwest Airlines. In the early years transfers often took place on the tarmac in the middle of a freezing Arctic night, bypassing the ‘terminal building’ altogether.

More recently, Icelandair benefits from the added value of its home base airport at Keflavik, on the Reykjanes peninsula and some 30 miles (50 km) from Reykjavik. Hewn out of volcanic lava by allied forces during the Second World War, the airport was until recently shared with the US Navy and NATO and has expanded its Leifur Eiriksson Terminal several times since it was opened in 1987, most recently in 2007. Although still quite small it is widely regarded as one of the simplest and most modern transit airports in Europe. The ex-military areas are being developed for industrial, commercial and academic purposes by the Keflavik Development Corporation. The capital also has a domestic airport close (some say too close) to the city centre and it may have to cease operations as soon as 2016.

The aggregate of the rapid transit offer at Keflavik airport and the (Great Circle) distance between Europe and North America means that Icelandair can often provide the shortest journey time between cities on its network; a variant of the proposal made more recently by Finnair at Helsinki for Europe-Asia (and vice versa) passengers.

Despite these advantages, Icelandair still has to work at ensuring these routes succeed. Among those to have fallen by the wayside are Fort Lauderdale, San Francisco, and, more recently, Baltimore-Washington, which was that airport’s first international air service.

Icelandair dominates the Leifur Eiriksson terminal with only the budget Iceland Express offering anything like a comparable number of services but Iceland Express has been growing quickly and has established the ‘low cost’ culture in Iceland. It will continue to pose problems for Icelandair. Only this week it announced that it would commence long haul services in the Northern Summer 2010, to New York Newark Airport and hinted it would, like Icelandair, offer connecting services from and to Europe, thereby replicating Icelandair’s own business model as the ‘low cost challenger’.

Other LCCs operating at Keflavik are Air Berlin, Germanwings and NIKI, both with a small complement of seasonal flights, also Lufthansa, SAS and Air Mediterannee, all with equally limited service. The high proportion of all these flights that are seasonal (ie Summer only) are symptomatic of the difficulties Icelandair experiences in filling its own flights for half the year.

In fact, an analysis of the two services that are being extended this month, Glasgow and Manchester, is a snapshot of how the airline works. The Glasgow service, which once operated daily, is resurrected after a short lapse and combined with the Manchester flight, which has been operating twice weekly, into a four-times-weekly service. Glasgow had been firmly established on the route network for many years until the recent pause as the nearest major city accessible from Iceland. Although the flight always attracted tourists and businesspeople from northern Britain, the majority of passengers were Icelanders, who used the airline for shopping and leisure trips. The UK having become a more significant market as others reached maturity, latterly, the Manchester service, which was introduced just over three years ago, attracts Icelanders in large numbers to soccer matches played by Manchester United and Liverpool, the two best supported clubs in Iceland, as well as shopping.

Both services are complemented by short break visitors to Iceland year-round and longer vacation ones in the Summer. Combining both flights and adding trans-Atlantic traffic both ways makes for the perfect mix, if it were not for the interminable yield equation.

The other difficulty Icelandair had previously but which it fixed, was a lack of commonality between aircraft types. Although it had an all-Boeing fleet, there was mix of B737-400 equipment and the B757-200 (medium-haul) types that were used on trans-Atlantic routes. The B737-400s could only be used across the Atlantic on the Halifax route or to Greenland and were effectively limited to European routes.

Successively, the B737-400s were phased out, extra B757s and B767s (since withdrawn) introduced, and orders placed for four B787s, to be delivered (hopefully) in 2011 and 2013, so that all available stock can be used equally on European and North American routes. Moreover, passengers experience exactly the same cabin type on a transit journey, an important factor in decisions made by business travellers. The same aircraft might fly, say, Amsterdam-Keflavik then Keflavik-Seattle. This scissor-network, common-equipment scheme of operation has since been employed by Jet Airways on its India-North America services via Brussels.

Table 2: Icelandair fleet in service and on order

In 2009 the B757s have been revamped with the introduction of an additional ‘Economy Comfort’ cabin, between the long-established Saga (Business) Class and Economy.

Icelandair has found it impossible to avoid the fall-out from the financial meltdown that all but destroyed the economy in the autumn of 2008 but true to its Viking spirit has been able at least partly to turn events to its benefit.

When the company stated, in Aug-2008, “The (financial) year 2008 will be a challenging year for the aviation industry” it could not have known how accurate that would be at home. Already the previous years’ positive performance was being offset by falling traffic, especially domestically, but when it went pear shaped for the Icelandic banking and finance business, one that had eclipsed fishing and tourism as the #1 ‘earner’, it did so in spectacular fashion, placing the entire country in massive debt.

Ironically the crash proved a blessing in disguise for Icelandair. Having already managed to earn 75% of its revenues from outside Iceland, and having reduced supply, it was able to capitalise additionally on the financial crash that devalued the Icelandic Krona dramatically to 50% of its level ten years ago, thus making the country genuinely affordable for foreign visitors for the first time and they began to arrive in droves. The necessity of saving the country from bankruptcy alone would have brought in scores of business travellers from the public and private sectors alike.

The Icelandair Group set about a refinancing exercise in Jan-09, amounting to ISK2.5 billion (USD11.1 million), with partner bank, New Glitnir. The purpose of the restructuring is to bring the repayment schedule of the company’s debts into line with its long-term payment capacity. For the 12 months ended Dec-08 revenue increased by 77.6% to EUR780 million. The EBIT loss was EUR39.4 million compared with a profit of EUR16.2 million the year before and net loss EUR51.7 million (2007: profit EUR1.8 million). As part of the austerity measures the company’s flagship North American headquarters was downsized and moved from Columbia, Maryland (close to Baltimore, at which the airline no longer has air service) to Quincy, Massachusetts (close to Boston, where it is expanding).

Icelandair’s ownership has changed twice since 2005, when it was renamed (Mar-05) FL Group and became heavily involved in foreign airline ownership and aircraft leasing activities at the height of the country’s plunge into financial madness. In the same year (Nov-05) FL Group sold the airline and travel operations and Icelandair Group was formed. Icelandair Group now comprises the companies listed in the table below:

Icelandair has always been in the private sector, in one form or another, and never in government ownership. Neither were its predecessors. Originally part of the Eimskip Group (shipping and fishing), Icelandair was floated, and then majority ownership passed into the private sector with FL Group. It is now once again a listed company, on the NASDAQ exchange.

In a press statement on 28-Sep-2009, Icelandair stated it would increase its capacity by 10% in 2010 and “make a special effort to bring tourists to the country.” It will add one B757 (see Table 2 for current and planned fleet data) and will increase the schedule to a number of destinations. Two new destinations, Brussels, and Trondheim in Norway, will be added to the network.

Icelandair estimates that the added capacity will increase the number of tourists visiting Iceland by about 20,000-25,000 and that they will bring into the country about ISK6 billion (USD48 million) in additional foreign currency to purchase goods and services. The increase will create about 100 additional direct jobs in aviation and flight services and it estimates that in addition over three hundred new jobs will be created in the Icelandic tourism industry.

Recently, a number of aviation sources in China have been arguing that a resurgent air transport sector there has been leading the country out of recession. On this evidence, it is quite possible that Icelandair, which has been so important to the fortunes of its home country for so long, may be about to do the same.