Plans by Brazil’s Gol to re-enter the US market, with Boeing 737NG service expected to be launched later this year to Miami, marks a significant shift in the carrier’s strategy of focussing on growing its domestic footprint in Brazil. The mindset change was likely influenced by Delta Air Lines, which late last year acquired a 3% stake in the low-cost carrier and gained a seat on Gol’s board.

During the past few years, Gol has taken a conservative approach to its international expansion, dropping several international destinations in favour of additional domestic capacity aimed at meeting fast growing demand from the country’s expanding middle class. Gol currently only serves five other countries in South America and operates a few low-frequency, primarily seasonal routes to the Caribbean.

Gol management has been stressing a focus on flights of three hours or less to capitalise on its low-cost model, indicating that was part of the reason it decided to drop flights to Bogota in Jun-2011. In 2009, Gol also dropped flights to Lima and non-stop flights from Sao Paulo to Santiago. The carrier now only serves Santiago via Buenos Aires, which is a much shorter route.

Gol’s conservative approach to international expansion is reflected in its current distribution of capacity, which shows 95% of its weekly seats allocated to domestic operations. This excludes capacity flown by Gol’s newly acquired subsidiary Webjet, which only operates domestic services.

In Jan-2011, only 9% of Gol’s RPKs were flown in the international market. When also including the 493 million domestic RPKs flown in January by Webjet, less than 8% of the group’s RPKs are international. 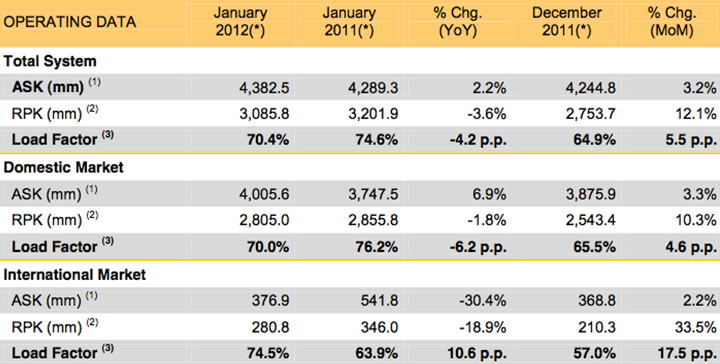 Gol late last year stated its international capacity would be flat in 2012, although the decision to resume flights to the US could now result in a slight increase in international capacity. The 30% year-over-year drop recorded for January reflects adjustments made in early 2011, including the end of 767 charter flights.

Gol’s recent decision to slow down domestic capacity expansion also gives it some flexibility to again pursue international expansion. The carrier last month announced that it now plans to add less than 2% capacity to the domestic market this year. Gol is hoping the conservative capacity approach will lead to an improvement in yields and load factors. Gol is targeting a 5 ppt improvement in its domestic load factor from the 69% it recorded in 2011.

Gol briefly served the US with scheduled 767 flights to Miami as part of a long-haul operation launched following its 2007 acquisition of Varig. But only a year after the Varig acquisition, Gol dropped its entire long-haul scheduled network.

Some 767s remained in Gol’s fleet and were used on and off for charters, including to the US. But the charter flights were completely underwritten by travel agents with no risk to Gol. As part of Delta’s investment in Gol last year, Delta agreed to sublease Gol’s last two widebodies, finally relieving Gol of aircraft that had been a financial drain on the carrier for years.

Venezuela to feature prominently in Gol’s new US strategy

Gol confirmed at the beginning of this month that it is studying re-entering the US market with 737s. The carrier has applied for rights from Brazil’s aviation authority ANAC for 14 weekly frequencies to the US and another seven to Venezuela.

Gol has not yet publicly specified which US routes it intends to operate but it understood that the carrier has applied to use seven of the US frequencies via Venezuela on a Sao Paulo-Caracas-Miami routing. Gol is expected to use the other seven frequencies to open a Belem-Miami route.

Caracas-Miami is a lucrative yet underserved market. While Gol will sell through tickets from Sao Paulo to Miami, it likely will fill most of the aircraft with passengers flying locally between Caracas and Miami.

With the exception of some flights offered by LAN, American Airlines and Santa Barbara Airlines now have a virtual monopoly in the Caracas-Miami market. Based on current schedules, American accounts for almost two-thirds of total capacity between Caracas and Miami. 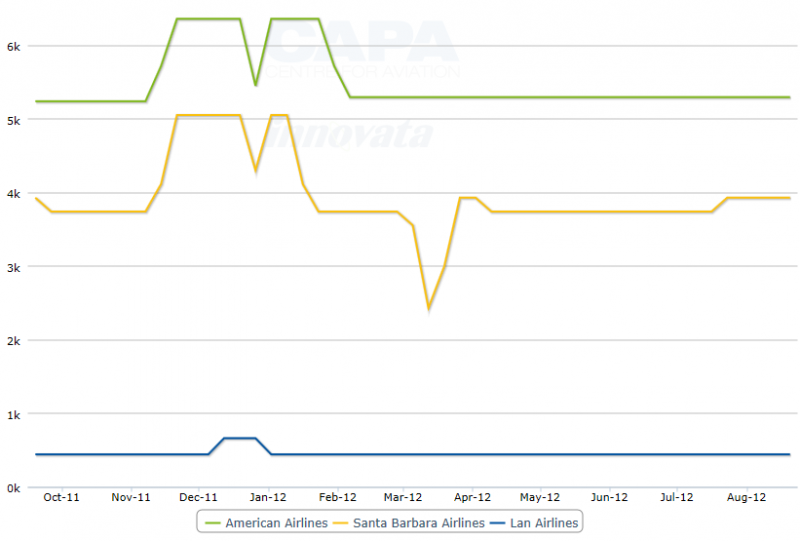 Fares in the Miami-Caracas market reflect the limited service options on the pairing. The cheapest return economy class ticket offered between Miami and Caracas is typically between USD750 and USD1000, according to data from ITA Software. Gol could seize the opportunity to stimulate traffic with its lower fares.

Gol is particularly well positioned in the market because the route is currently not served by any low-cost carrier. Fort Lauderdale-based LCC Spirit Airlines has been keen enter the Caracas market for some time but has not yet been able to secure the required traffic rights.

Gol already operates one daily flight from Sao Paulo Guarulhos to Caracas. It also already holds some pick-up rights from the Venezuelan capital that it uses for flights to the Caribbean. Currently five of its seven weekly Caracas flights continue on to Punta Cana and two weekly flights continue on to Aruba.

Belem could get first US service

Belem is largely a domestic airport located in Northern Brazil, but its traffic is steadily climbing, growing 18% in 2010 to 2.8 million passengers. Most of Brazil’s major carriers operate domestic services from the airport. Surniam Airways and Air Caraibe also offer international flights to Belem.

As traffic continues to increase between the US and Brazil, Belem could serve as a connecting point to Gol’s extensive domestic network. Gol will likely use its Belem-Miami service to sell tickets to passengers in several Brazilian markets while keeping most seats in its Caracas-Miami service for passengers heading to and from Venezuela. Gol now serves about 10 domestic routes from Belem and is the second largest carrier at the airport after TAM. 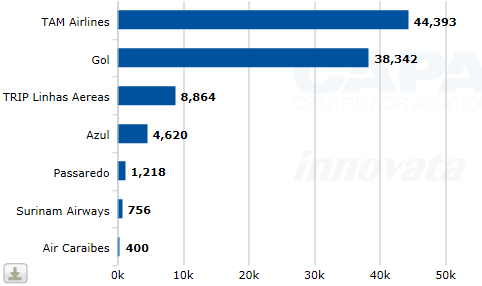 Manaus would be another fast-growing airport in northern Brazil which would be within narrowbody range of Miami. But TAM already operates a daily service from Manaus to Miami and American Airlines is launching four times weekly service on the route in June. By selecting Salvador, Gol will provide a unique service and will not have to compete directly against its larger competitors.

Manaus, however, could be a third option for Gol if the carrier decides to later further expand its US operation beyond two daily flights. There is still room for Brazilian carriers to expand under the existing Brazil-US bilateral as only 29% of seats between Brazil and the US are now operated by Brazilian carriers.

TAM is the only Brazilian carrier currently serving the US. While TAM plans to increase capacity later this year on some of its existing Brazilian routes, the carrier’s expansion in the US is relatively modest, leaving a void in the market for a potential second Brazilian player. 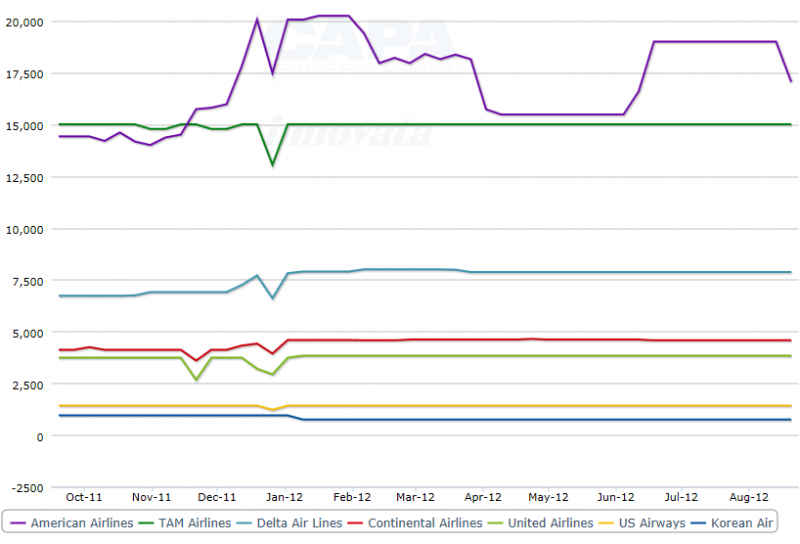 Delta could be exerting influence on Gol

Gol’s decision to adjust its international strategy could have resulted from its deepened relationship with Delta, who likely urged the carrier to take the long view that there may be more opportunities in the less competitive international market. While the Brazilian domestic market still has room for growth, the country’s booming economy is slowing. Brazil’s GDP growth is projected to fall this year to 3% after peaking at 7.5% in 2010. 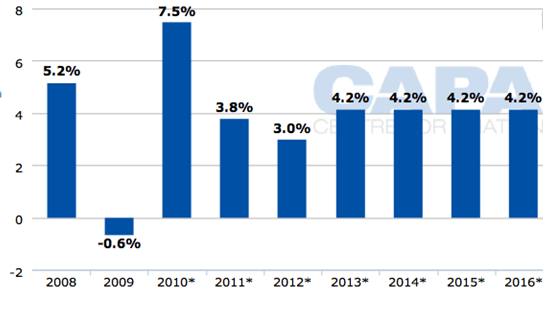 Last year when Gol and Delta unveiled their deepened relationship, Gol executives highlighted the potential of the Brazil-US corridor during the next five to 10 years, noting that Delta selling Gol’s flight globally, their frequent flyer tie-up and other synergies presented a “tremendous opportunity”. As the Brazilian economy slows, Gol could be looking to accelerate some of the synergies available through its partnership with Delta.

Through new Gol flights, Delta will gain access to the lucrative south Florida to Brazil and Venezuela markets. Delta now serves Latin America though its hubs in Atlanta, where connections are available throughout North America. But connections via Atlanta to south Florida, which is the biggest single market for Latin America, require significant backtracking and therefore are not really viable.

The huge south Florida market to Latin America market is now controlled primarily by American and oneworld. Gol also has had a codeshare and frequent flyer partnership with American since 2009. But this partnership is expiring later this year and will not be renewed in light of the expanded partnership between Gol and Delta.

Without the American tie-up Gol will have increased incentives to launch its own flights to Florida while Delta is eager for Gol to enter Miami as it would give Delta an opportunity to compete in this market against rival American. None of Delta's SkyTeam partners now serve the south Florida to Brazil or Venezuela markets.

Although Delta has expanded its operations to Latin America by 43% during the last six years, its performance in the region is lackluster compared to most of its US legacy peers. For the fourth quarter of 2011 United’s yields in its Latin American markets jumped 11.3% year-over-year as the carrier stressed Latin America was its best performing entity during the quarter and for the full year 2012.

While American’s restructuring under bankruptcy could create some opportunities for Delta and other carriers in the Latin America market, American is unlikely to significantly decrease capacity to the region given it is the most profitable part of its network. In fact, American is continuing to add capacity in some Latin American markets including Brazil.

Part of Delta’s struggle in keeping pace in Latin America is the lack of SkyTeam alliance partners in the region. Its long-standing partner Aeromexico has a relatively small network in Latin America. Aside from its codeshares with Aeromexico and Gol, Delta now has limited connectivity in South America.

Delta, however, has been working on improving its connectivity in Latin America and plans to start codesharing later this year with Aerolineas Argentinas. Delta also played a key role in inviting Aerolineas to join SkyTeam. Aerolineas is now in the process of joining SkyTeam and expects to formally enter the alliance later this year.

Based on current data, Star Alliance and oneworld have much bigger presences in Latin America than SkyTeam. Star’s share of capacity in the region will grow later this year as Copa and Avianca-TACA are now in the process of joining Star. But TAM is expected to switch from Star to oneworld after its merger with LAN is complete, which would make oneworld the region’s largest alliance. TAM’s switch to oneworld, however, will likely lead to Star accepting Avianca Brazil as a new member. Currently Avianca Brazil is not in line to join Star with its sister carriers from Colombia, Peru and Central America.

All these moving pieces could put pressure on Gol to reverse its repeated desire to remain unaligned with any of the global alliances. With TAM expected to join oneworld and Avianca Brazil expected to join Star, SkyTeam will be left as Gol’s only option and the carrier will be unable to continue working with foreign carriers from multiple alliances. Delta was already pushing Gol to join SkyTeam before its investment in the carrier. As the Gol-Delta partnership deepens and as Gol launches services to the US, a decision on joining SkyTeam becomes increasingly likely. 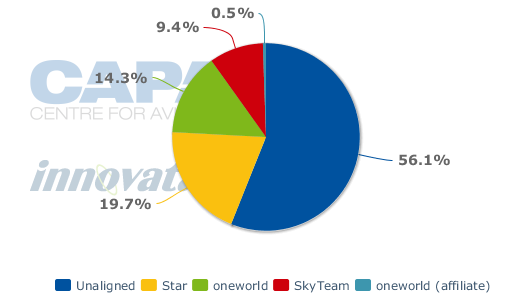