Brazil’s TAM is planning further capacity expansion on US routes in 2012 as growth in the Brazilian domestic market shows signs of cooling down. The US expansion will be driven by the doubling of TAM’s B777-300ER fleet next year from four to eight aircraft. The B777-300ER, which is by far the largest aircraft type in TAM’s fleet, is now only used on European routes but will start to be deployed in the US during 2012.

TAM CEO Libano Barroso told CAPA at the recent ALTA Airline Leaders Forum in Brazil that the carrier plans to only increase domestic capacity in 2012 by 4% to 5%. This follows domestic ASK growth of 12% for TAM in 2010 and 11% through the first 10 months of 2011. 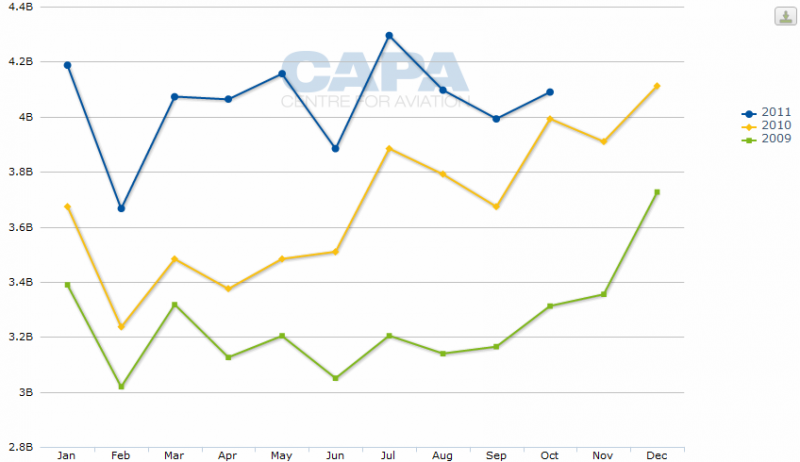 Mr Barroso expects Brazil’s overall domestic passenger market (RPKs) to grow between 8% and 12% in 2012, down from the 23% growth recorded in 2010 and the 19% growth reported through the first three quarters of 2011. Growth in the current quarter, however, has started to slow, partially driven by an increase in fares on most major domestic routes.

Oct-2011 figures from Brazilian civil aviation authority ANAC shows only 9% RPK growth for the Brazilian industry, including a slight drop of less than 1% for TAM. More single-digit growth for Brazil’s total domestic market is expected for November and December. Mr Barroso predicts final 2011 ANAC Brazilian domestic figures to show growth of about 15%.

TAM recently revised its 2012 fleet plan in response to the slower domestic growth. The carrier now plans to start and end 2012 with an A320 family fleet of 127 aircraft. Previously, TAM was planning to grow its A320 fleet by four aircraft in 2012, ending the year with 131 aircraft.

The slower growth in some respects is an encouraging sign as some of the growth earlier this year came at the expense of yields. TAM’s domestic yield dropped by 21% in 2Q2011, although yields started to recover in 3Q2011 with a 2% improvement. Mr Barroso says yields are expected to be up 3% to 5% in 4Q2011.

The recent improvement in yields at TAM and other Brazilian carriers is the result of more rational pricing and a more conservative approach to capacity. As a result, Brazil’s two major carriers – Gol and TAM – are both expected to be in the black in 4Q2011 and, given their relatively conservative capacity increases planned for 2012, are confident profitability can be sustained next year.

TAM last month reported a net loss of BRL620 million (USD344 million) for 3Q2011, driven by currency exchange losses (see Background information). Unlike Gol, which was was in the red in the second and third quarters, TAM has remained in the black this year from an operating profit standpoint. TAM’s relatively stronger performance is primarily due to the international market, where yields have been increasing all year.

Gol and TAM combined account for 79% of total domestic traffic in Brazil (Gol’s market share was 38% through the first 10 months of 2011 while TAM’s market share was 41%). Combined the two carriers also account for 99% of Brazilian carrier international traffic but TAM has a more balanced network with 40% of its passengers revenues generated from international flights. TAM’s share of the international market was a commanding 88% based on ANAC RPK data for the first 10 months of 2011.

However, capacity on TAM’s US routes will likely increase by almost 10% next year because capacity on European routes, which now accounts for 44% of TAM’s total international ASKs, is expected to be flat. 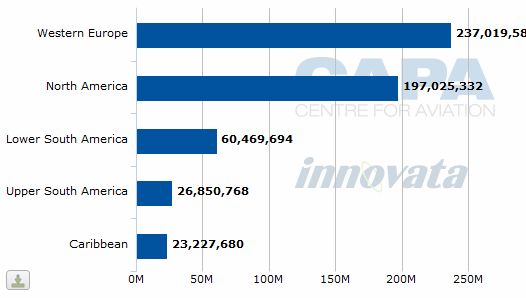 TAM VP operations and maintenance Ruy Amparo tells CAPA that the carrier has already decided to allocate two of the B777-300ERs being delivered in 2012 to the US market. While a final decision has not yet been made on where to deploy the other two B777-300ERs being added in 2012, Mr Amparo says these aircraft will also likely end up on US routes as TAM’s US routes are now performing significantly better than European routes.

TAM, seeing weakening demand in European, to expand in US

TAM now uses its existing B777-300ERs on its Sao Paulo-Frankfurt and Sao Paulo-London routes but expansion of its European network is unlikely in 2012 given the current banking crisis in Europe. “Traffic to Europe is now suffering,” Mr Amparo says, adding that, on other hand, there are “superb load factors to the US”.

Demand on TAM’s US routes has increased as the strengthening of the Brazilian reais compared to the US dollar has made holidaying in the US significantly less expensive for Brazilians. In response to strong outbound leisure demand, TAM earlier this year added a second daily flight from Sao Paulo to Orlando, a route it only launched in late 2008.

TAM’s 2012 fleet plan calls for a net addition of three widebodies from 29 to 32 aircraft. In addition to the four B777-300ER deliveries, the fleet plan includes the delivery of one additional A330 (its 21st of the type) while TAM’s two A340-500s are returned. TAM acquired the A340-500s as interim capacity (B777s were not as readily available) following last decade's collapse of Varig. The aircraft have already largely been withdrawn from service, Innovata schedules show, meaning TAM will be able to expand with all five widebody aircraft it is taking delivery of next year rather than having to use some of the five to replace the A340-500s.

In addition to up-gauging existing US flights to B777-300ERs, TAM will have sufficient additional capacity in 2012 to potentially launch new US routes with A330s. TAM currently only has four US gateways, while US carriers now serve Brazil from 10 gateways. TAM may continue its conservative approach of the past two years and add flights to existing long-haul destinations rather than adding new long-haul points in its network. New points bring greater risk and cost.

Some of TAM's aircraft deliveries are scheduled for late 2012, meaning the full capacity affects will not be seen until 2013. In 2013 TAM plans to take delivery of two B777-300ERs but return two A330s (the fleet plan may change following the completion of TAM's merger with LAN.)

Further growth for TAM in the US is also possible under the US-Brazil bilateral as Brazilian carriers are not operating to the maximum quota while US carriers are. US carriers now account for 67% of total capacity between the two countries. TAM is currently the only Brazilian carrier operating long-haul flights and could double its capacity without having to expand the bilateral – an advantage for TAM as the US-Brazil market grows. 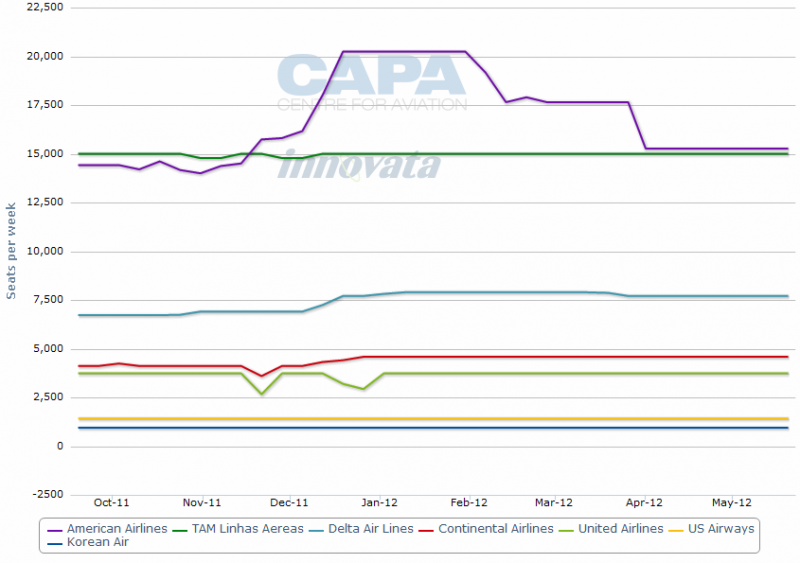 Mr Amparo says the first of 27 A350s on order are also slated for delivery in 2014. The A350s are expected to be used primarily to replace TAM’s B767s and A330s, although a few aircraft have been allocated for growth. In addition to US routes, TAM now uses its A330s to Milan, Paris, Mexico City and some flights within South America.

TAM’s pending merger with LAN, which is expected to be completed in late 1Q2012, could also open up opportunities for accelerated widebody expansion. LAN will provide additional feed for TAM long-haul flights, particularly flights to Europe as Brazil is closer to Europe than any of LAN’s hubs. The merger could also potentially provide sufficient traffic to support flights to Asia from Sao Paulo, although Mr Barroso stresses that for now TAM plans to rely on alliance partners to respond to increasing demand from Asia.

LAN also now operates long-haul flights from its bases in Argentina, Chile, Ecuador and Peru, with widebody flights at its new Colombian subsidiary likely to be pursued in future. LAN is expected to continue operating B767s and, starting in 2012, B787s, on its long-haul routes. That leaves larger capacity widebodies such as B777s and A350s for the TAM operation because LAN’s long-haul routes are generally thinner than TAM’s long-haul routes.

In addition to US routes, Mr Amparo says TAM is now seeing strong demand on international routes within Latin America. Growth of intra-Latin America capacity is expected to increase as synergies from the merger with LAN are pursued, which has passenger airline subsidiaries in five South American countries.

TAM last year launched Bogota and at the end of Oct-2011 added Mexico, giving the carrier service to eight Latin American countries. TAM also has a subsidiary carrier in Paraguay. Mr Amaro says there are no plans to grow TAM Paraguay, which currently operates three A320s, saying demand in Paraguay is “steady” and “we keep it profitable”.

Domestically while TAM has decided to slow down capacity expansion and focus on improving yields on trunk routes, it expects continued rapid growth in Brazil’s secondary markets. TAM primarily serves these markets via a partnership with regional carrier TRIP, which has been growing this year at a 62% clip and is not expected to follow Brazil’s main carriers in slowing down expansion.

TAM last year looked at acquiring 100-seat aircraft to serve secondary markets but opted instead to pursue closer ties with TRIP. TAM is now in the process of acquiring a 31% stake in TRIP. As part of the expanded partnership, the number of codeshare flights operated by TRIP has increased 76% to 211.

Mr Amparo explains that TRIP allows TAM to serve destinations in the Amazon region which cannot be accessed with TAM’s smallest aircraft, the A319. He says throughout Brazil there are also a large number of medium sized cities which cannot sustain regular operations with A319s and are better suited for TRIP’s fleet of ATR turboprops and Ejets. “The economy is growing and the medium cities have a lot of economic power,” Mr Amparo says.

Low-cost carrier Azul has a similar network strategy to TRIP, pursuing growth in secondary cities with its fleet of ATR 72s and E195s. While overall growth in the Brazilian domestic market is expected to slow down in 2012, driven by flat or only modest increases in capacity on major routes, Azul and TRIP will be exceptions as regional routes will continue to record high double-digit growth.

Acquiring a strategic stake in TRIP allows TAM and new LAN-TAM parent company LATAM to focus on the synergies which will benefit their international and domestic trunk route networks. TAM’s rate of growth is expected to slow down significantly in 2012, but higher rates of growth could be pursued in 2013 and beyond as some of network synergies of the merger are realised.

TAM’s leading share of Brazil’s domestic market, the world’s fourth largest, was the biggest attraction for LAN. But TAM’s position in the Brazilian international market is also valuable and the carrier’s relatively small long-haul operation will likely see accelerated growth under LATAM, initially to the US and eventually to Europe as well as potentially to Asia.

This is the fourth in a series of analysis articles on Brazil’s leading airlines. CAPA was recently in Brazil for the ALTA Airline Leader Forum.

See the other related articles in this series: 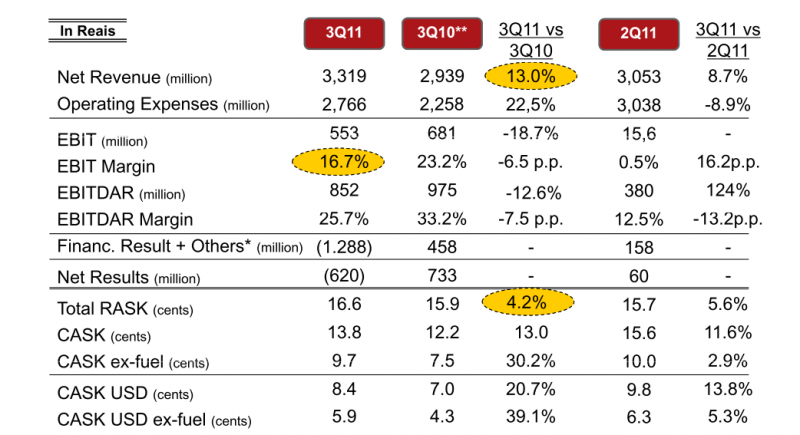