Despite a slower growth for Brazil’s economy, Gol is bullish on its outlook for 2012 as domestic yields, which dropped significantly earlier this year, are beginning to recover. Gol also expects to benefit in 2012 from a new cost reduction initiative, its recent acquisition of smaller low-cost carrier Webjet and its expanded partnership programme with other carriers. After incurring losses in 2Q2011 and 3Q2011, Gol will likely be back in the black in 4Q2011 and remain profitable throughout 2012.

Oct-2011 figures show Gol’s domestic yields are again tracking higher than 2010 levels. Gol executives told analysts last month during the carriers’ 3Q2011 conference call that yield improvements are expected to continue through 4Q2011 and into 2012 because the Brazilian airline industry overall have become more rational with fares and more disciplined with capacity.

Yields should further improve as Gol is taking a conservative approach to capacity for 2012. The airline group now plans to grow capacity next year by at most 4%.

Speaking to CAPA at the recent ALTA Airline Leaders Forum in Brazil, Gol CEO Constantino de Oliveira Junior said the small capacity increase will be driven by the replacement of B737-300s for larger B737-800s at Webjet. Mr Oliveira says capacity at the Gol operation will be flat next year.

Gol unveiled plans in Jul-2011 to acquire 100% of Webjet, which operates 24 B737-300s and currently has a 5.5% share of Brazil’s domestic market. While the deal has not yet closed as it is still being reviewed by the Brazilian antitrust court CADE, Gol is able to start the process of renewing Webjet’s fleet. Mr Oliveira says Gol plans to replace Webjet’s entire fleet with B737-800s over the next 18 months, with the first B737-800s entering service at Webjet by the end of this year.

Mr Oliveira is keen to swap out Webjet’s B737-300s as fast as possible because B737-800s are much more fuel efficient, have lower per seat costs and are ideally suited for Webjet’s network. Fleet synergies can also be pursued if both carriers operate the same type.

Gol has a large B737-800 order book consisting of 97 firm orders, 10 purchase rights and 40 options. But Mr Oliveira says Webjet will be receiving B737-800s that are currently in operation at Gol as all new aircraft will continue to be placed onto the Gol operating certificate as they are delivered.

The carrier is able to quickly replace Webjet’s fleet because nearly all of Webjet’s B737-300s are on short-term leases of up to two years. Gol also has the flexibility to pursue rapid fleet renewal at Webjet because it has a large number of its own B737-700/800s that are coming off lease. Gol has been returning several B737NGs per annum (mainly B737-700s) in recent years and replacing them with new B737-800s as part of its ongoing fleet renewal strategy. Mr Oliveira explains that Gol can renew leases on some of the aircraft it had been planning to return in 2012, thereby freeing up aircraft for Webjet without having to shrink Gol’s own fleet.

Webjet will become a full subsidiary of Gol and be included in Gol’s earnings from 4Q2011. To mitigate potential ant-trust concerns, Gol has agreed to have Webjet retain independence and operate as a separately managed entity. Gol, however, still expects to be able to exploit the full synergies from the merger including route network optimization. Webjet will allow Gol to increase its presence at several key Brazilian airports, including airports where growth opportunities are otherwise limited due to slot limitations or congestion.

Gol’s load factor slipped to 65% in Oct-2011 as the average fare on most core domestic routes increased. Gol believes the improvement in yields generated by the more rational fares more than offsets the impact of the lower loads. A similar trend is expected for the rest of the current quarter. 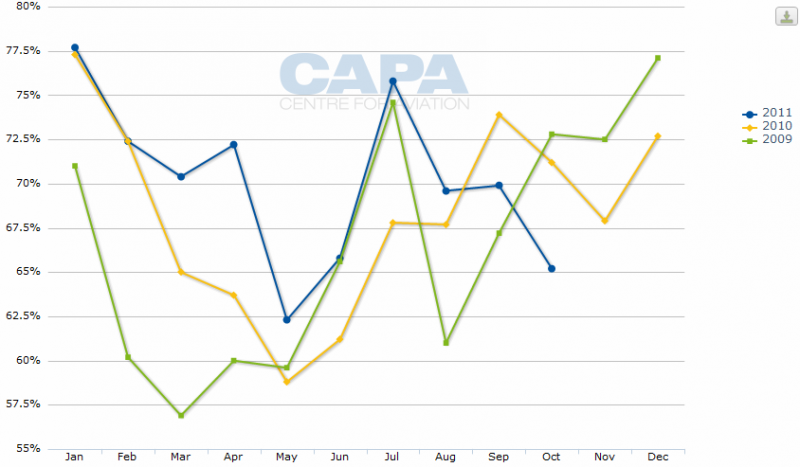 Gol now expects demand (RPK) growth in Brazil’s domestic industry for 2012 of 7% to 8%. This is significantly lower than the 23% RPK growth recorded in 2011 and the 17% growth recorded through the first 10 months of this year. But as Gol CFO Leonardo Periera pointed out in Gol’s 3Q2011 conference call, the growth over the last two years has been “extraordinary” and growth of 7% to 8% “is still very healthy”.

The slower growth is expected next year as Brazil’s economy (GDP) is now only expected to expand by 2.5% to 3% in 2012. Gol is assuming passenger traffic will grow at a multiple of 2.5 to 3 times GDP, leading to the 7% to 8% projection. Gol is hopeful that that the slowdown in growth will allow for improvements in yields compared to the discouraging yield declines of 2Q2011 and 3Q2011, which had a major impact on the bottom line because they occurred as fuel prices increased.

In addition to more disciplined capacity and synergies from its purchase of Webjet, Gol expects to benefit next year from the BRL650 million (USD361 million) cost reduction programme which it quickly initiated earlier this year after slipping into the red in 2Q2011. Mr Periera says Gol is already realising BRL500 million (USD278 million) in annual savings from this programme and expects the remaining BRL150 million (USD83 million) will kick in by 1Q2012.

Gol’s alliance strategy another example of conservative approach to capacity

Currently only 95% of Gol’s capacity (seats) is allocated to the international market, according to Innovata data. Webjet is entirely a domestic operator.

Gol earlier this year dropped its long-haul charter operation and scheduled flights to Bogota. The carrier over the last few years has dropped several international destinations and been focussing on a lower risk strategy of expanding its international network by adding codeshare partners.

Aerolineas expects to be the first carrier to implement a two-way codeshare with Gol. So far the Brazilian carrier’s alliance partners only sell on Gol flights although Gol has been working the last several years on upgrading its reservation system to allow Gol to also sell on its partners.

Mr Oliveira tells CAPA that the upgrade of the reservation system, which is being pursued with Navitaire, will be completed in the “near future” and “within the next three months” the carrier should have the flexibility to start selling tickets on other carriers. But he says an exact date has not yet been set for the launch of tickets sales on other carriers.

Gol is particularly interested in selling on Aerolineas as it will allow the carrier to augment its position in Argentina, which is by far Gol’s largest international destination with 78 flights per week. According to CAPA’s route analyser tool, Aerolineas currently accounts for 22% of capacity between Brazil and Argentina while Gol accounts for another 36%. As a result the two carriers combined will have a commanding 58% share of the market. 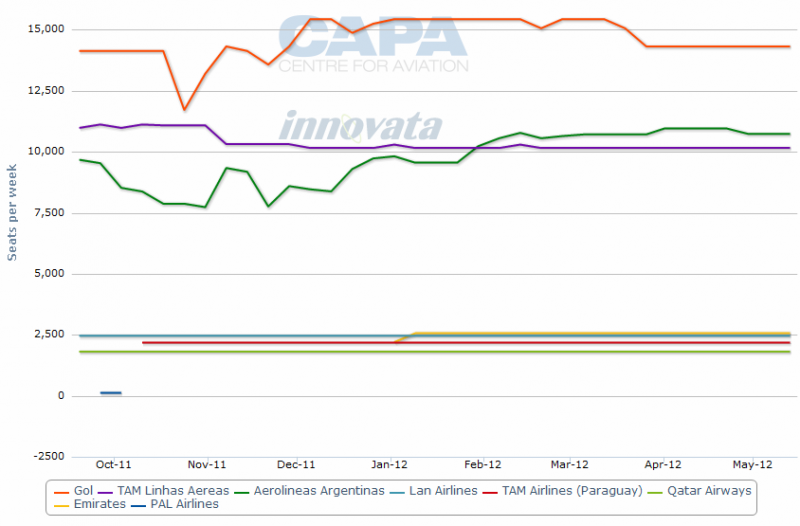 Mr Oliveira says Brazil-Argentina is a “big market” and being able to sell Aerolineas seats provides a better “balance” as it will be able to offer more frequencies to its customers. In addition to codesharing on Brazil-Argentina flights, Mr Oliveira envisions Aerolineas selling on Gol domestic connections and Gol selling on Aerolineas domestic flights, allowing it to expand its network in Argentina beyond the four airports and three cities it currently serves.

Selling on US and European carriers is not as critical for Gol because it currently doesn’t offer long-haul services. The partnerships with Gol’s existing six partners were pursued primarily to increase feed for Gol’s domestic flights and give its frequent fliers an opportunity to accrue and redeem points on long-haul flights. As a result the partnerships were initially forged as one-way codeshares with frequent flier reciprocity.

Gol says it is continuing to seek further expansion of its network of partners, with a particular emphasis on long-haul carriers that serve Brazil. Foreign carriers provide valuable and high yield feed for Gol, helping in its ongoing effort to boost load factors and improve yields.

Overall Gol is in relatively good shape for 2012 despite the tough global economic conditions and expected slowdown in Brazil’s economy. But as this year’s challenges have shown, capacity discipline and fare rationality in the overall Brazilian market is required for Gol to be profitable. The Brazilian market is known for its steep ups and downs with irrational pricing often rearing its ugly head. Brazil is a fantastic growth market with incredible long-term opportunities but sustained profitability is hardly guaranteed.

This is the third in a series of analysis articles to be published over the next several days on Brazil’s leading airlines. CAPA was recently in Brazil for the ALTA Airline Leader Forum. See first article in this series: Azul plans more rapid expansion, expects to capture 15% of Brazilian market by end of 2012. See second article in this series: Avianca Brazil accelerates expansion as ex-LAN A318s and new A320s are added to fleet 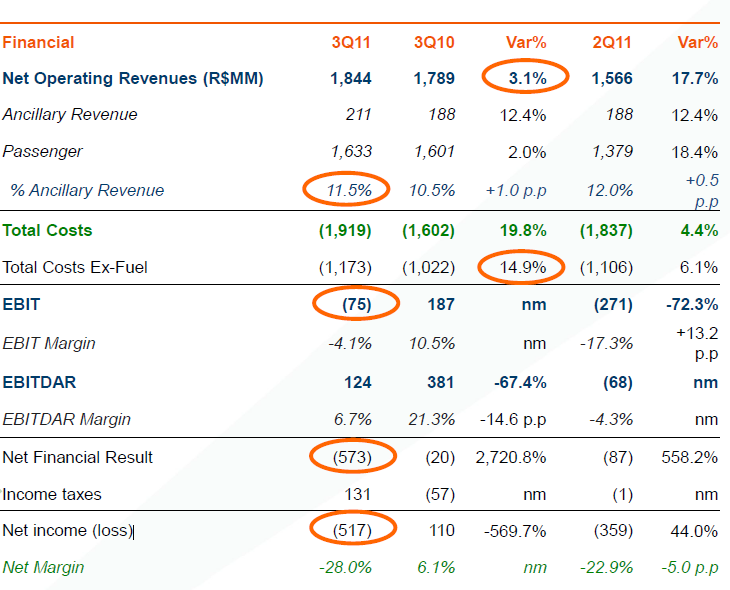 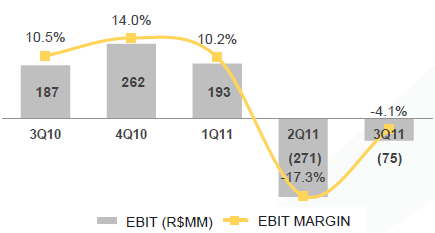