Jet2.com entered the ranking at number 19, pushing Air Europa into 20th and knocking Flybe out of the top 20 altogether. The UK LCC grew traffic by 32.7%, to 12.2 million passengers, and took the title of fastest growing among the top 20 groups.

This report ranks Europe's top 20 airline groups by passenger numbers in 2018 and also includes a ranking of the top 20 individual airline brands.

LCCs account for six of Europe's top 20 airline groups – one more than in 2017, thanks to Jet2.com's entry. As before, leisure groups account for a further two of the top 14.

The tour operator TUI Group does not publish its airline passenger numbers, but CAPA estimates that it carried approximately 23 million, retaining its number 12 ranking.

After a decline in 2017 and in spite of its being in administration through all of 2018, Alitalia then grew its passenger numbers by 0.9%, to more than 21 million.

Finnair stayed in 18th place, with 13 million passengers, but its growth of 11.6% now takes it within one million of Aegean. 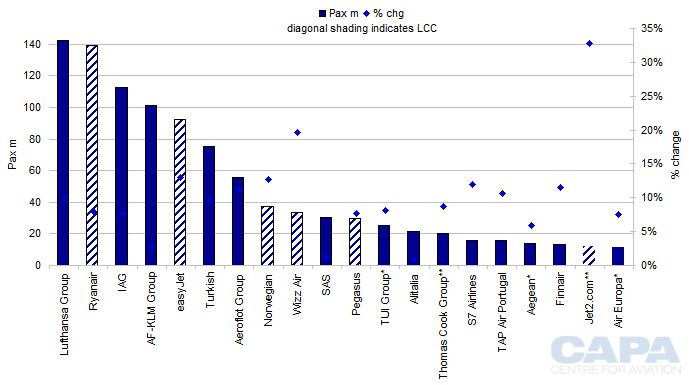 *Indicates 2018 passenger numbers not yet reported or not available; figures are CAPA estimates based on Nov-2018 YTD growth, calendar 2018 seat growth data from OAG, or other available data.
**Figures for 12 months to Sep-2018.
Source: CAPA - Centre for Aviation, airline company traffic reports.

Led by Flybe, 10 airlines sit just outside the top 20, LOT Polish being the fastest growing

In 2018 10 airlines/airline groups sat just outside the top 20 with passenger numbers in the range of 4 million to 10 million. The biggest, Flybe, carried 9.5 million passengers (year to Sep-2018). It grew passenger numbers by 2.6%, but fell out of the top 20 ranking for the year and reduced its capacity.

Most of the others are still following expansion paths.

Five of these grew at double digit rates in 2017, led by LOT Polish, with 27.5% growth to 8.8 million passengers. The Spanish LCC Volotea's passenger numbers grew by 36% to 6.6 million.

Three other rapidly growing Eastern/Central European airlines are also in this emerging group: the hybrid LCC airBaltic (growth of approximately 20% to more than 4 million passengers), Ukraine Airlines (15% growth to 8 million) and Ural Airlines (13% growth to 9 million).

UTair Aviation grew passenger numbers by 4.8% and Icelandair by 9.8%. The Romanian LCC Blue Air slowed its growth to 2.8% in 2018 after strong double digit rates in 2017, but carried an estimated 5 million passengers.

Virgin Atlantic has not yet reported passenger numbers but grew seat numbers by 5.1% after shrinking in 2017, and probably carried more than 5 million in 2018.

Virgin Atlantic is part of a consortium acquiring Flybe in 2019. Although Virgin will not control the UK regional airline on its own, both will operate under the single brand, Virgin Atlantic. Combing the 2018 passenger numbers of these two amounts to 15 million passengers, which would displace the Aegean Airlines Group at number 17. 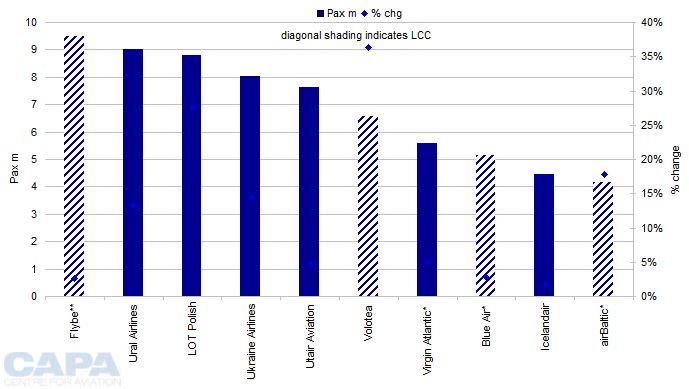 Most of the top seven groups have a range of individual airline brands, each telling a slightly different story.

The main engine of Lufthansa Group's 10.0% growth remained its point-to-point airlines division, which groups together Eurowings and Brussels Airlines. This segment grew passenger numbers by 18.0%, to 38.5 million.

The group no longer breaks out traffic for the two brands, but CAPA estimates around 28 million and slightly higher growth for Eurowings, with around 10million passengers for Brussels Airlines.

IAG has not reported the breakdown of its 2018 passenger numbers into its individual airlines, but CAPA estimates are shown in the graph below. The group's growth was 7.7%.

The highest passenger growth among IAG airlines is likely to have been achieved by the LCC Vueling, with growth estimated by CAPA at 16% (to an estimated 34 million passengers). British Airways remains the group's biggest airline, with approximately 47 million passengers. Estimated Iberia traffic is almost 20 million passengers and there were 11 million for Aer Lingus in 2018.

The Air France-KLM Group, which increased passenger numbers by only 2.8%, was the slowest growing among the big three legacy groups in 2018. Air France grew by just 0.4%, to 51.4 million.

The LCCs Ryanair and easyJet operate as single airline brands, each of which has more passengers than the individual airline brands of the other leading groups.

The same is broadly true of Turkish Airlines (some of its domestic traffic is carried by its subsidiary Anadolujet, which has its own livery but flies under the same TK code as Turkish and does not report separately). 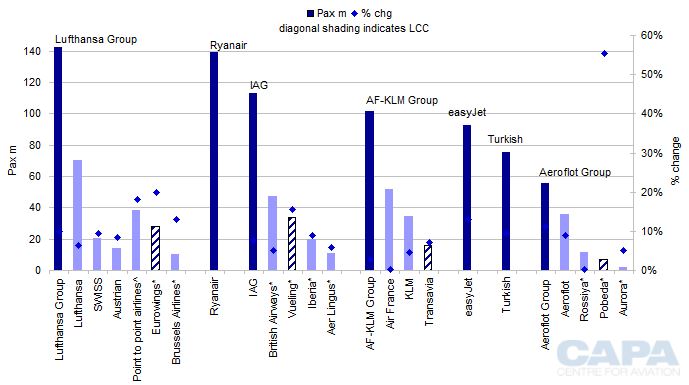 Ryanair carried nearly 47 million more passengers than the second placed easyJet (this difference is almost equal to the total number of passengers carried by sixth placed British Airways). Its total was almost double that of fourth ranked Lufthansa. 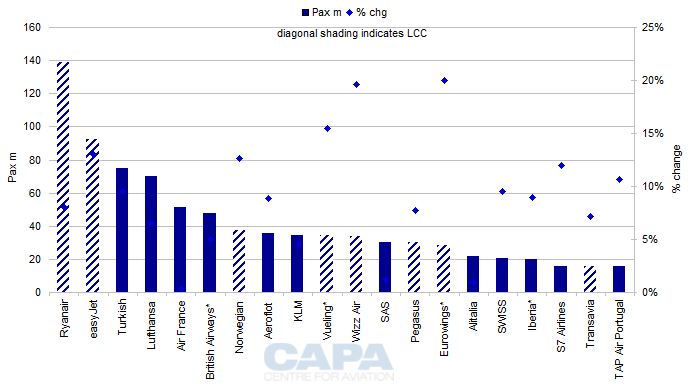 The Lufthansa Group widened the gap with Ryanair a little in 2018 with its growth of 10.0% outpacing Ryanair's 8.0%, thanks to the integration of some of airberlin's capacity in Germany and Ryanair's moderation of growth after its pilot rostering problems.

These two look likely to continue to jostle for the top spot among European airline groups in 2019 and for the foreseeable future, unless one of the chasing pack makes a significant acquisition. Unless IAG renews its interest in buying Norwegian (the combination of the two would have 150 million passengers and top the ranking), this seems unlikely.