Seat numbers between Canada and Europe are barely growing this summer compared with summer 2018. This follows five years of strong growth between summer 2013 and summer 2018. The exits of WOW air and fifth freedom operator Jet Airways help to explain the pause in growth in a market where seat share has been consolidating.

Canada-Europe is dominated by Canadian airlines, which share 64% of seats between three of them. The merger of the top two, Air Canada and Air Transat, will lead to a 59% seat share in this market. The Star JV dominates the other North Atlantic JVs.

The leading European airline, Lufthansa, has 6% of Canada-Europe seats. LCC seat share is only 5%, the majority of this operated by WestJet, with Norwegian and LEVEL also present. However, this does not include Air Canada Rouge, which has more routes to Europe than WestJet.

The CAPA Canada Aviation Summit in Winnipeg on 9-10 September 2019 will include a panel on Canada's trans Atlantic market. This report gives some background for that discussion.

According to data from OAG Schedules Analyser, the number of seats between Canada and Europe in summer 2019 will be two thirds higher than 10 years previously, with much of this increase taking place since summer 2013.

Although the Dec-2019 signing of the Canada-EU open skies agreement did not lead to an immediate increase in capacity, there was a 56% increase in seats between summer 2013 and summer 2018, which represented a compound average growth rate of 9.4% pa.

However, Canada-Europe seat numbers will be almost unchanged this summer versus summer 2018 (up by just 0.2%).

This stagnation in capacity owes much to the demise of WOW air, which had a seat share of 1.4% last summer, and Jet Airways, which had 1.2% based on fifth freedom rights.

The LCC WestJet and TUI Group's French subsidiary Corsair are growing and LCC Norwegian has entered this summer, but market leaders Air Canada and Air Transat are each growing by only 0.5%.

The Canada-Europe market is dominated by Canadian airlines

According to OAG data, operators based in Canada have 63.7% of Canada-Europe seats this summer. This is divided among three airlines: the market leader Air Canada (41.6% seat share), second ranked Air Transat (17.6%) and seventh placed WestJet (4.4%).

The merger of Air Canada with Air Transat, expected to conclude in early 2020, will take the market leader's seat share to 59.2% (based on summer 2019 data). 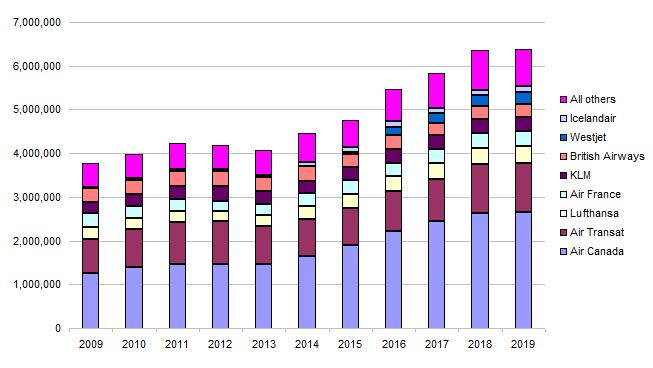 These three have supplied three quarters of all the incremental seat capacity added to the market since summer 2013, when Canada's airlines had a share of 57.2% (before WestJet's entry).

Air Canada has been responsible for more than half (52%) of the extra seats over this period, WestJet has added 12%, and Air Transat has added 11% of them.

The largest European airline in this market is Lufthansa, with 6.1% of seats, followed by Air France, KLM and British Airways, each with approximately 5%. Icelandair has 2.1%, Condor has 1.5%, and Turkish Airlines and LOT Polish each have 1.4%. No other airline has more than 1% of Canada-Europe seats.

Lufthansa has supplied 5.8% of the incremental seat capacity added since summer 2013. This is more than any other European airline, while Icelandair has been responsible for 4.3% and Air France for 3.1%.

The Star JV dominates the other North Atlantic JVs

Air Canada is the only Canadian airline to participate in a North Atlantic JV. Its partnership includes Lufthansa Group airlines on the European side.

This JV within the Star Alliance has a 50.2% seat share this summer. SkyTeam's Air France-KLM and Alitalia jointly have 11.0%, and British Airways is the only oneworld JV member operating, with 4.7% of Canada-Europe seats.

LCC seat share is 5.1% this summer, a drop from 5.9% last summer, according to OAG Schedules Analyser. LCC share is almost all WestJet, with Norwegian and LEVEL France the only other LCCs captured in the OAG data.

This contraction is in spite of WestJet's growth and Norwegian's entry, and reflects the withdrawal of WOW air and Primera Air.

OAG data indicate that WestJet has been the biggest LCC by seat capacity between Europe and Canada since it entered in 2014. Before summer 2015, LCC seat share was below 1.0%.

However, OAG capacity data are based on airline codes and do not reflect capacity operated under Air Canada's low cost Rouge brand, which uses the mainline code.

At the start of summer 2019 Norwegian launched a seasonal service to Dublin from Toronto John C Munro Hamilton. The four times weekly service is the only trans Atlantic route from Toronto's second airport.

Canada-Europe remains much smaller than US-Europe, but has grown faster

Canada-Europe remains a distant number two to US-Europe in the North Atlantic market.

Based on OAG data for the week of 29-Jul-2019, Canada's North Atlantic seat capacity is less than a quarter that of its US counterpart.

Nevertheless, Canada-Europe weekly seats have grown by 55.9% in this week compared with the equivalent week of 2013, faster than the 41.0% growth in US-Europe over that time frame.

Canada-Europe is consolidating, but growth should resume

Canada-Europe's seat capacity growth since 2013 has been achieved with the net addition of only one airline (from 22 to 23), six routes (from 89 to 95) and no change in the total number of airports involved (static at 55) between Jul-2013 and Jul-2019, according to OAG data.

This implies a consolidation of capacity share among the airlines operating and, although the number of airlines has hardly changed, the seat share in the hands of the larger operators has increased. The exit of WOW air and Jet Airways and the expected merger of Air Canada and Air Transat illustrate this process well.

The stagnation of total seat capacity in summer 2019 looks like another phase in the consolidation process, rather than a new trend of slow growth.