Avianca has cut back significantly in Ecuador’s domestic market as it focuses on domestic growth in Colombia and Peru. The group’s Ecuadorean subsidiary, AeroGal, has redeployed capacity to the international market, which it sees as more profitable following the opening of a new airport at the capital Quito.

Government-owned Ecuadorean carrier TAME also has been expanding, leading to a further drop in market share for Avianca. The Ecuadorean market also saw in 2Q2013 the entry of a fourth domestic carrier in Linea Aerea Cuencana.

Avianca entered into an alliance with AeroGal in 2008 and acquired the carrier in late 2010. AeroGal renewed its fleet in 2011, replacing ageing 737s with new A320 family aircraft sourced from Avianca’s order book. AeroGal adopted the Avianca brand in May-2013, completing an integration process which also saw all carriers from the TACA Group, which merged with Avianca in 2010, take on the Avianca brand.

But under Avianca, AeroGal has not been expanding. Its primary domestic operation has been relatively flat while flights to the US were cut.

LATAM subsidiary LAN Ecuador has expanded rapidly during the same timeframe. LAN Ecuador launched services in 2003 and quickly became the country’s largest international carrier. But it did not enter the domestic market until 2009. LAN has since rapidly grown its domestic operation in Ecuador, overtaking AeroGal as the country’s second largest domestic carrier in 2012.

TAME remains the country’s largest domestic carrier and over the last 15 months has made a big push into the international market. TAME currently serves 15 domestic destinations and eight international destinations, six of which it has launched since mid-2012.

TAME recently took delivery of its first widebody aircraft, an A330-200. It is now preparing to launch A330 service to New York, filling the void left by AeroGal, which dropped New York service in 2012. LAN Ecuador has continued to serve New York, which has a large Ecuadorean community.

Avianca captures only 21% of Ecuadorean domestic market in 2Q2013

AeroGal and LAN both serve the same six domestic destinations in Ecuador. But after overtaking AeroGal in 2012, LAN Ecuador has continued to expand in 2013 while AeroGal has been shrinking its domestic operation.

Based on current capacity data, AeroGal now has an 18% share of seats in Ecuador’s domestic market while LAN has about a 26% share and TAME a leading 55% share. Linea Aerea Cuencana (LAC) has about a 1% share as it currently only operates one route, Quito-Loja, with eight weekly flights. 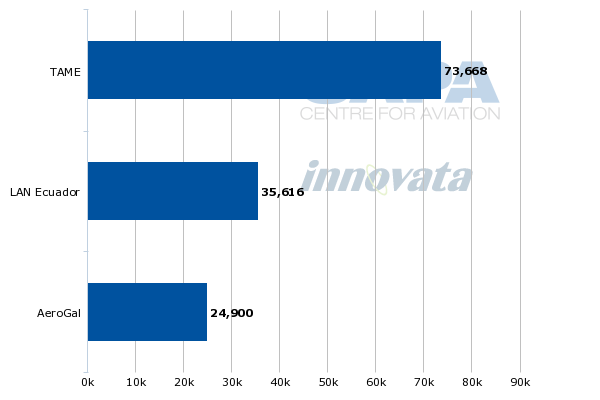 Note: LAC capacity is not captured by Innovata but based on its website currently offers only 1,120 weekly seats
Source: CAPA – Centre for Aviation & Innovata

LAC launched operations in May-2013 with a one Bombardier CRJ700 regional jet. The carrier initially served four routes – Quito to Cuenca, Guayaquil and Loja as well as Guayaquil to Cuenca. But it quickly suspended every route except Quito-Loja, which is only served by TAME. It competed against both AeroGal and LAN Ecuador as well as TAME on Quito to Cuenca and Guayaquil while only TAME now operates Cuenca-Guayaquil.

While TAME focused on international expansion in 2012, it has been primarily expanding in the domestic market since early Jan-2013, when it launched Guayaquil-Sao Paulo. Over the last eight months it has added just one international route, Quito to Buenos Aires, which was launched in Jun-2013. 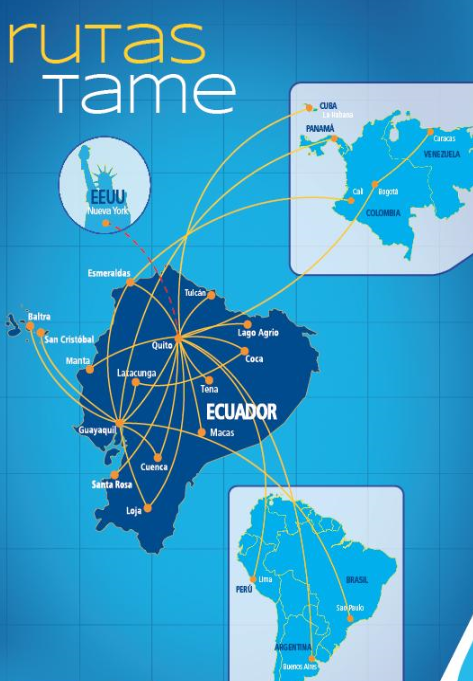 TAME will again focus more on international expansion in 2H2013, with the anticipated launch of A330 services to New York as well as the launch of A319 services from Quito to Sao Paulo. But TAME is expected to maintain its new higher level of domestic capacity in 2H2013. The increase implemented in 1H2013 has had an impact on the market, particularly as it coincided with increases at LAN Ecuador and the launch of a new carrier.

According to Avianca, the Ecuadorean domestic market also has seen a drop in demand, leading to its decision to cut domestic flights. Avianca CEO Fabio Villegas told analysts during the group’s 2Q2013 conference call that domestic demand has been impacted by the elimination of a fuel subsidy and the opening of a new airport at Quito.

Ecuador eliminated the subsidiary at the beginning of 2012, prompting airlines to tack on a fuel surcharge to cover the difference, which resulted in a rise in total prices. Quito’s new airport opened in Feb-2013 about 40km from the city, replacing an airport which was near the city centre. Mr Villegas says domestic demand has been affected by the shift in airports, particularly on Quito-Guayaquil, which is by far Ecuador’s largest domestic route.

“The market itself has been reduced in the last year. All the airlines have felt that impact,” Mr Villegas claimed. “We are waiting for the market to stabilise so that we can define what our capacity in the domestic market is going to be. In meantime we are increasing our international operation from Ecuador.”

AeroGal has taken over flights from Quito to Bogota and Lima which were previously operated by the group’s Colombian and Peruvian subsidiaries. Previously the carrier only served one international destination, Cali in Colombia. The larger international operation has allowed AeroGal to reduce unprofitable domestic flying and post a break-even result for 2Q2013, according to Mr Villegas.

Avianca is now closely monitoring Ecuador’s domestic market to determine future capacity levels. “We are waiting to see how the domestic market will behave in light of what’s going on with the new airport,” Mr Villegas said.

LAN Ecuador has also slightly reduced domestic capacity in Sep-2013 compared to Aug-2013 levels, according to Innovata data. But capacity is still up significantly year-over-year and LATAM has not mentioned any challenges in its domestic Ecuadorean operation. The group’s domestic load factors across South America remain relatively healthy.

Avianca has not yet expanded overall capacity in Ecuador’s international market as the new AeroGal flights have taken over from flights operated by other subsidiaries. But expansion is possible as AeroGal looks to focus more on the international market.

The Avianca Group currently has a 24% share of international capacity in Ecuador, compared to a leading 27% share for LATAM Airlines Group. TAME has only a 7% share, but this is up significantly compared to 2012 and will grow further as flights to New York and more international routes within South America are added. 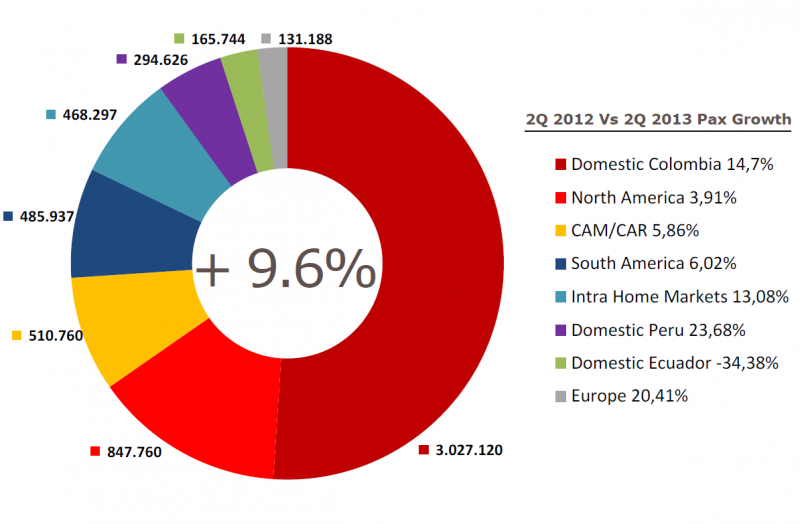 Avianca is the market leader in Colombia and has been expanding rapidly in response to new LCC competitor VivaColombia. In 1H2013 Colombia’s total domestic passenger traffic was up 21% to 10.3 million, according to Colombian CAA data. As a result Avianca has seen its share in the market drop despite the 15% increase in passenger traffic. In its 2Q2013 results announcement, Avianca stated its domestic market share in Colombia dropped from 60.2% in 2Q2012 to 55.5% in 2Q2013.

But Mr Villegas told analysts it has not lost market share in routes where it competes with other carriers. (VivaAerobus has launched several routes which were previously un-served, contributing to some of the overall growth in the market.) Unlike the Ecuadorean operation, Avianca also remains profitable in the Colombian domestic market.

Mr Villegas said the Colombian domestic operation has performed better in 2013 than the group was initially expecting given the increased competition. “The market is very profitable for us,” he said. “It’s one of the most profitable markets in which we operate.”

In Peru, Avianca has been expanding rapidly over the last three years but remains well behind market leader LAN Peru. Avianca subsiary TACA Peru began targeting the domestic market in 2010. Previously it only had one domestic route and was predominately an international carrier.

LATAM focuses domestic expansion on Peru and Chile along with Ecuador

LAN Peru also pursued rapid domestic growth in 2Q2013 but not quite as fast as TACA Peru. LATAM reported ASK growth in the Peruvian domestic market of 17%. Of LATAM’s six domestic markets, only Ecuador and Chile recorded faster growth.

LAN Colombia recorded 3% ASK growth in 2Q2013 – a very modest figure given the rapid growth at rival Avianca and the overall growth in the Colombian market. LATAM cut capacity by 12% in the domestic Brazilian market, which has seen challenging conditions over the last year. Avianca also has a sister carrier that operates in the Brazilian market but Avianca Brazil is not included in Avianca Holdings figures as it remains under separate private ownership.

For the full year 2013 LATAM is projecting a 7% to 9% ASK reduction for domestic Brazil. The group projects domestic ASKs to increase an average of 12% to 14% across the five LAN-branded domestic markets of Argentina, Chile, Colombia, Ecuador and Peru.

In 2Q2013, domestic operations accounted for about 50% of LAN’s ASKs. Of the group’s six domestic markets, Ecuador is its smallest. 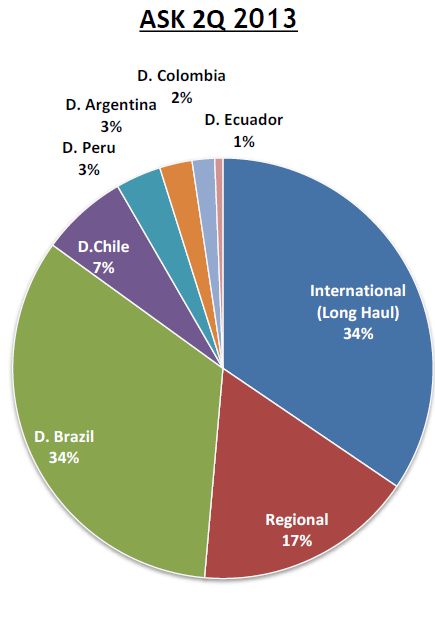 Ecuador is also by far the smallest of the three domestic markets served by Avianca Holdings. In 2Q2013, domestic operations accounted for 3.5 million or about 60% of the group’s total passenger traffic.

While Avianca is committed to remaining the domestic market leader in Colombia, where it has by far its largest hub, the group is not shy to reduce capacity in other markets if conditions are not favourable. In addition to implementing domestic changes in Ecuador, the group reduced international capacity in Costa Rica in 2Q2013, downgrading the hub at San Jose to a focus city.

Avianca will likely maintain a significant presence in its smaller home markets such as Costa Rica and Ecuador. But its recent moves show the group will not sacrifice profitability to chase market share.