Avianca’s closure of its hub in Costa Rica has opened up opportunities for other carriers, particularly US carriers and Panama-based Copa. The Latin American airline group significantly downgraded its operation at the Costa Rican capital San Jose in late 2Q2013 as it cut five routes and reduced frequency on three others. Avianca previously considered San Jose as one of its four hubs but now calls it a focus city.

US carriers have been adding capacity to San Jose, with Delta launching service to Los Angeles, one of six destinations cut by Avianca. JetBlue has launched service to Fort Lauderdale.

Copa Airlines is also adding capacity to San Jose and will become the airport’s largest carrier in early Oct-2013, when it adds a ninth daily flight from Panama City. Avianca was using San Jose as a competing north-south hub although the number of transit passengers had been small compared to its other hubs and miniscule compared to Copa’s hub in Panama City. 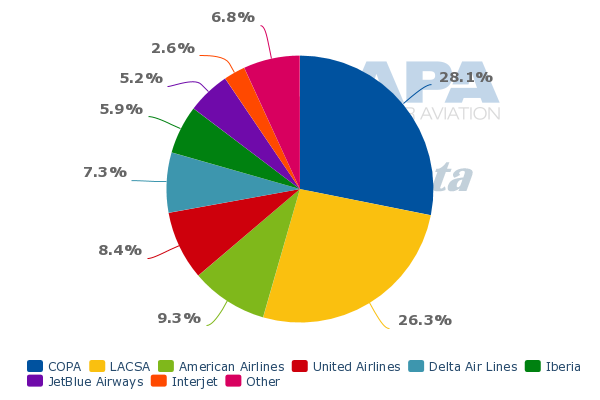 Copa is upgrading its Panama City-San Jose service to eight daily flights at the beginning of Oct-2013. Six of its Panama City-San Jose flights continue onto other destination in Central America, including two each to Guatemala City and Managua and one each to San Pedro Sula and Tegucigalpa. This gives Copa a total of 14 daily flights in the San Jose market in Oct-2013.

With the eighth daily frequency, Panama City-San Jose will become Copa’s largest route, overtaking Panama City-Bogota, which is a hub-to-hub route as Copa’s Colombian subsidiary is based in Bogota. This is first time Copa has served any route with as many as eight frequencies although CEO Pedro Heilbron has played down the potential impact of Avianca’s reduction in San Jose. “Their San Jose hub was their weakest,” Mr Heilbron told analysts during the carrier’s 2Q2013 results presentation. “We do not expect a material difference or material benefit.”

But Copa likely was a driver in Avianca’s decision to close the San Jose hub as the Panamanian carrier has been expanding aggressively in the Costa Rican market in recent years, gaining market share and weakening the position of Avianca.

On the Panama City-San Jose route Copa’s capacity has increased by about 70% over the last two years. Panama-Costa Rica is a strong market but cannot alone support the large steady increase in capacity. Copa’s sixth freedom traffic to and from Costa Rica has clearly grown significantly. 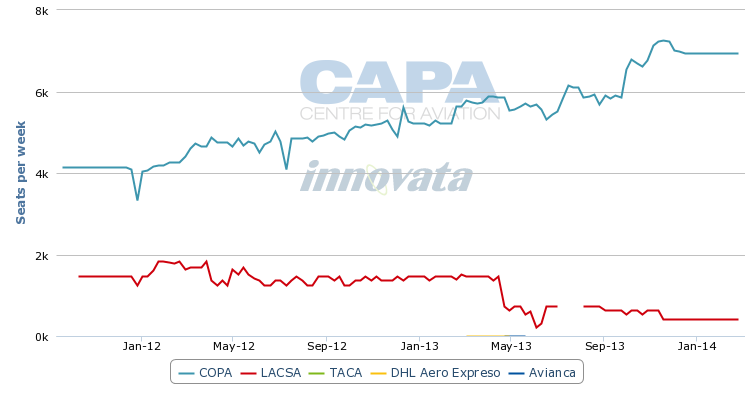 Copa also launched services to Costa Rica’s other international airport, Liberia, in 2012, further solidifying its position in the Costa Rican market. As it becomes the leading carrier in San Jose, Copa also becomes the largest carrier in Costa Rica. 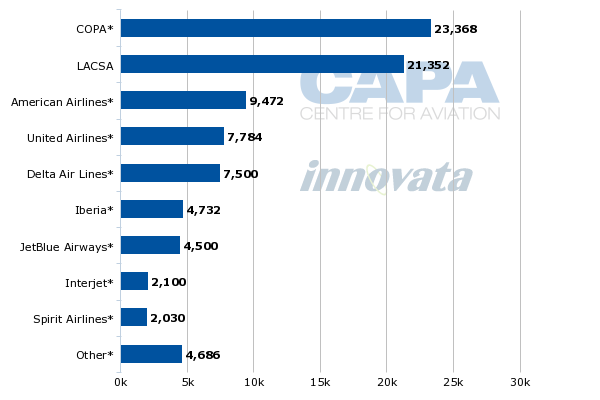 From Panama City, Copa serves all the destinations dropped by Avianca as well as the 11 destinations that remain in Avianca’s San Jose network. The cuts significantly limit Avianca’s ability to funnel passengers from north to south using San Jose. Avianca still has opportunities to carry these passengers using its San Salvador, Bogota and Lima hubs. But none of these hubs have nearly the number of international destinations as Panama City, which is by far the biggest hub for international travel within the Americas.

Panama City is also the least congested of Latin America’s hubs, which gives Copa a competitive advantage over Avianca and the region’s other big airline group, LATAM, in attracting transit passengers. While closing its smallest hub is a logical move for Avianca, it will intensify the congestion challenges at its remaining hubs as passengers that previously transited in San Jose are shifted to other hubs.

The downgrade at San Jose came as Avianca adopted a single brand. The use of TACA as a separate second brand in the Central America and Peruvian marked ceased in May-2013.

Colombia-based Avianca and El Salvador-based group TACA merged in early 2010 and the adoption of a single brand represented the last step in the integration process which has delivered network synergies and improved profitability. Avianca completed a successful initial public offering in 2011. The group reported a net profit of USD148 million for 1H2013, compared to a loss of USD46 million in 1H2012.

The TACA-branded operation had included flights operated by Costa Rican subsidiary LACSA as well as El Salvador-based TACA International and Lima-based TACA Peru. Avianca has retained the hubs in El Salvador and Peru while transitioning these operations to the Avianca brand. The group’s largest hub is at Bogota.

In addition to San Jose, Avianca also has what it calls focus cities in Guayaquil and San Jose in Ecuador. The operation in Ecuador is operated by AeroGal, a small Ecuadorean carrier that is 100% owned by Avianca Holdings and also has adopted the Avianca brand.

The Avianca brand is also present in the domestic Brazilian market through Avianca Brazil, which has its main hub in Sao Paulo. But Avianca Brazil is not currently owned by the publicly-listed Avianca Holdings and remains under privately held Synergy Aerospace, although Synergy is the largest shareholder of Avianca. Synergy, controlled by the Efromovich family, is the vehicle that has been used to explore a potential acquisition of TAP Portugal.

Bogota, Caracas, Guatemala City, Lima and most San Salvador flights are operated with A320 family aircraft. Miami, Panama City and some flights to the San Salvador hub are served with Avianca’s E190 fleet while the short hops to San Pedro Sula and Tegucigalpa in Honduras and Managua in Nicaragua are served with ATR 42 turboprops.

The remaining 11 routes in Avianca’s San Jose network should have sufficient local demand to be sustained without having to rely on transit passengers. Avianca is the only carrier operating non-stop services to Bogota, Caracas, Lima and San Salvador. It competes with Copa to Guatemala City, Managua, Panama City, San Pedro Sula and Tegucigalpa. (Copa for the most part picks up a new set of passengers in San Jose on its flights from San Jose to Guatemala City, Managua, San Pedro Sula and Tegucigalpa as Copa has separate non-stop flights to these destinations from Panama City.)

On the San Jose-Mexico City route, Avianca competes against Aeromexico and Mexican LCC Interjet. It competes against American to Miami although American has a dominating 83% share of capacity on the San Jose-Miami route. American, which is the largest foreign carrier in San Jose, currently has two daily flights on the route. (American also operates one daily flight to San Jose from Dallas.)

The San Jose-South Florida market is also served by low-cost carriers Spirit and JetBlue from Fort Lauderdale with one daily flight each. JetBlue launched services on the San Jose-Fort Lauderdale route in late Jun-2013, supplementing the daily San Jose-Orlando service which it launched in 2009.

Delta also launched at the beginning of Jul-2013 a daily service to San Jose from Los Angeles. Delta initially planned to begin the route in Dec-2013 but Avianca’s decision to exit the route from May-2013 prompted it to move up the launch date. (Delta is operating only four weekly flights in Sep-2013 and Oct-2013 but will return to the daily schedule in Nov-2013, according to Innovata data.)

US carriers are better position to serve the US-Costa Rica market as it is primarily an inbound market. Costa Rica is a popular holiday destination for Americans. Costa Rica also has a large expatriate American population and many Americans have second homes in the country.

The US-Costa Rica market is also highly seasonal, which makes it challenging for local carriers such as LACSA. US carriers can more easily adjust capacity from their hubs depending on the season. Four of the six US carriers serving San Jose – American, Delta, United and US Airways –  increase capacity, some significantly, during the peak season.

US Airways essentially serves Charlotte year-round (with the exception of a few weeks during the lowest season) and Philadelphia during peak periods.

United currently operates three daily flights to Houston and one to Newark, but will add a fourth flight to Houston and a second to Newark for the peak winter season. United has benefited from Avianca dropping service from San Jose to New York JFK as it is now the only carrier operating non-stops between and New York City area airport and San Jose. United also launched earlier this year new seasonal weekly services to San Jose from its Chicago O'Hare and Washington Dulles hubs.

The US currently accounts for 40% of Costa Rica’s international capacity but this increases to about 55% during the peak winter season, according to CAPA and Innovata data. US carriers also see their market share increase significantly in the winter, with American and United accounting for almost as much international capacity in Costa Rica in Dec-2013 as Copa and Avianca. 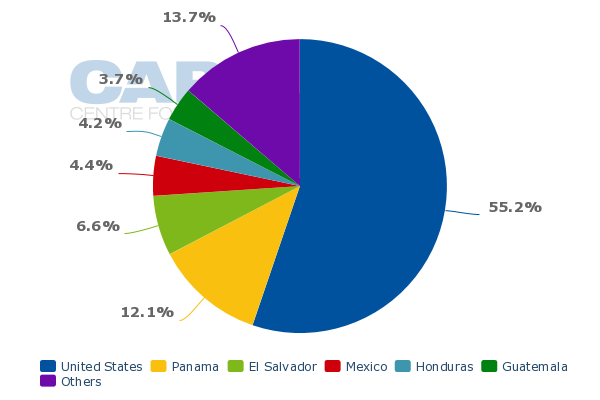 Avianca focuses on other markets

Avianca’s other home markets – Colombia, Ecuador, El Salvador and Peru – have a different dynamic as they have more steady year-round demand and have more outbound demand. These countries also have a lot of US traffic but this traffic is predominately Latino, with a focus on the visiting friends and relatives (VFR) sector.

Avianca as a group continues to expand rapidly despite the reduction in San Jose. In 2Q2013 the group added capacity on seven existing routes from its Bogota hub, partially using aircraft that were redeployed from San Jose. The carrier also added two A320s and one ATR 72 to its fleet in 2Q2013.

Total ASKs were up 8.7% in 2Q2013 while RPKs were up 9.2%, resulting in a slight improvement in load factor to 78.2%. But in its short/medium-haul international network, ASKs were up only slightly as the group focused more on domestic expansion.

Avianca international network: as of Aug-2013 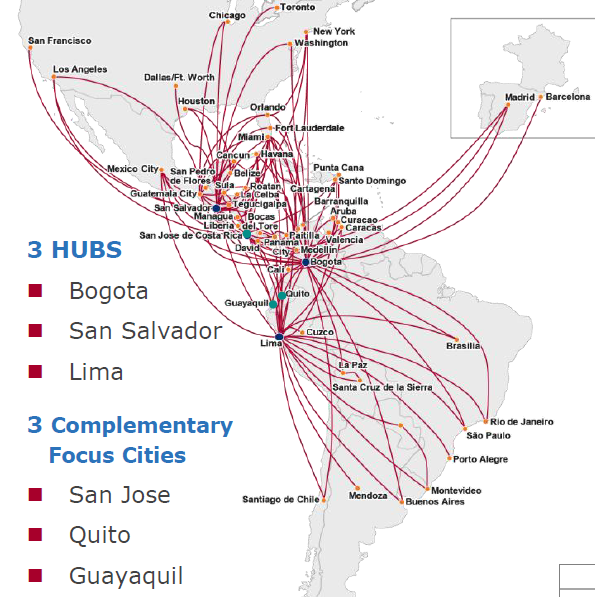 These figures show the downgrade of the San Jose operation from hub to focus city will not slow down the group’s growth as the capacity is allocated to larger hubs. The restructuring of the Costa Rican operation should also improve Avianca’s profitability as San Jose was a small and weak hub with limited benefits to the overall group.

Avianca should be able to retain a large share of its Costa Rican passengers by maintaining several point-to-point routes and offering connections via its larger hubs. But inevitably some traffic will be lost to US carriers and Copa, which is again expanding in Costa Rica and will soon be the country’s largest carrier.