Air traffic in the Peruvian domestic and international markets continues to grow steadily as overall traffic growth in Latin America remains strong despite weakening economies in Europe. Through the first five months of 2012 Peru recorded 14% growth year-over-year in domestic passengers carried as TACA Peru continued to build up its market share after making a two-phased expansion into the domestic space starting in 2010.

Peru's international market also has been growing rapidly, expanding by 15% through the first five months of 2012. Peru's largest carrier and TACA Peru's main rival, Lan Peru, has been expanding its international operation and is now planning another push from its Lima hub to leverage the combined network of new parent LATAM to capitalise on connecting passengers from North America, which should further bolster Peru’s international market.

TACA Peru, meanwhile, saw its share grow 8ppts to 13%, and moved up the rankings into the second spot. Local carriers Peruvian Airlines and Star Peru recorded a diminished presence as Star’s share fell from 15% to 12% year-over-year while Peruvian’s share decreased from 16% to 11%.

TACA Peru’s domestic operation only consisted of flights from Lima to Cuzco until early 2010. The airline has since made a push in the domestic market, initially adding flights in 2010 from Lima to three large cities - Arequipa, Chiclayo and Trujillo - as well as introducing service to the smaller markets of Piura, Juliaca and Tarapato. During 2011 TACA Peru increased frequencies in several of these domestic markets. TACA Peru's domestic push was supported by the introduction of the Embraer 190 into its fleet, which previously only consisted of Airbus A320 family aircraft.

The domestic expansion by TACA has resulted in three carriers serving most main domestic routes. Lan Peru, TACA Peru and BAe 146 operator Star Peru now offer flights from Lima to Tarapato as well as Lima-Juliaca. TACA Peru, Lan Peru and Peruvian Airlines all serve Lima-Arequipa. All four of the major domestic Peruvian carriers operate Lima-Cuzco, the only domestic route TACA Peru operated prior to 2010 but has expanded with additional frequencies.

DGAC data shows that for the moment the domestic market appears absorbing the capacity ushered in by TACA Peru. During 2011, 6.2 million passengers travelled domestically in Peru, a nearly 13% increase from the 5.5 million customers transported during 2010. In 2010 there was even faster growth of about 28%. 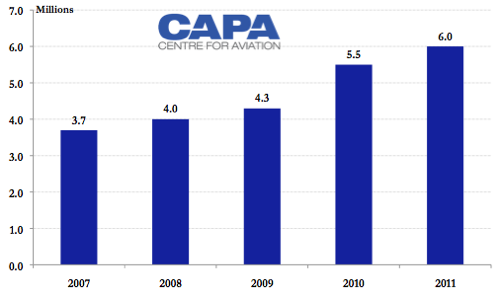 Combined Lan Peru and its sister carrier, Lan Airlines, held a 47% share of the Peruvian international market during Jan-May-2012, up 2ppts from the 45% share they captured during the same period of 2011. Lan Airlines is based in Chile but also operates several non-Chile routes from the group's Lima hub. These figures exclude Lan Argentina and Brazil's TAM, which merged with the LAN group earlier this year to form the new LATAM Airlines Group. Lan Argentina and TAM each account for just under 2% of Peru's international market, giving the LATAM Airlines Group a total share of over 50%

The Avianca-TACA group currently only has about a 14% share of Peru's international market. This includes a 9% share from TACA Peru, a 3% share from Colombian sister carrier Avianca and about a 2% share from El Slavador-based TACA and TACA Cost Rica (LACSA).

Source: Peru DGAC
Note: the share for others comes from carriers with less than 2%. United's share includes Continental

With LAN’s merger with TAM complete, the management of LATAM Airlines Group believes Lima is a strategic hub within the combined network. Recently LATAM executives hinted at a push from Lima as the company aims to leverage demand in its north-south long-haul markets to North America through a capacity push during the next few months that will carry over into 2013.

Intensifying competition between LATAM and Avianca-TACA in Lima

LATAM also sees an opportunity to build up and transition more passengers from LAN’s network throughout Argentina, Chile and Peru to TAM’s Rio de Janeiro hub to strengthen TAM’s long-haul operations. Evidence of that strategy has manifested through three new weekly flights planned by TAM from Rio to Lima beginning on 31-Oct-2012. TAM currently only serves Lima from its larger Sao Paulo hub with one daily flight using A320s.

TACA Peru currently enjoys a monopoly on the Lima-Rio pairing, which it serves with one daily A320 flight. The intensified competition between Lan Peru and TACA Peru on Lima-Rio is likely to be an indication of increasing overlap between the larger networks of LATAM and Avianca-TACA, which completed thier merger in 2010.

During Jan-May-2012 TACA Peru recorded a 9% share of Peru’s international market in terms of passengers carried, a 1ppt drop from the 10% share the carrier held during the year prior. The carrier also held a 10% share of the Peruvian international passenger market for full-year 2011. But the carrier is poised to increase its share through the last four months of 2012 as it launched new services from Lima to Medellin and Cali, Colombia in late Aug-2012, leveraging Avianca’s comprehensive Colombian network.

Given the new route launches to Colombia during the last few weeks it appears Avianca-TACA is using Lima in similar manner to LATAM, to bolster connections to strong points in the combined network. The encounters between Latin America’s two largest airline groups will only multiply as those combined entities continue to fine-tune their combined network. Lan Colombia, which LAN acquired in late 2010 and has since restructured, is also starting to expand in the international market.

The Avianca-TACA group has also been considering making Lima its second Airbus A330 widebody base after Bogota, which could further intensify competition in the Peruvian market where LAN is the only local brand operating widebodies. Avianca-TACA has internally allocated one of its A330s scheduled for delivery in 2013 to Lima for potential long-haul flights to Madrid. But it is unclear if those plans will materialise given Europe's weak economic state, and Spain’s economy in particular. LATAM management, however, stated during the company’s 2Q2012 results discussion that its business in European markets remains solid, though yields were stronger in its long-haul North American markets.

Over the long-term LATAM might see more benefit from leveraging TAM’s Sao Paulo and Rio hubs for long-haul growth to Europe rather than adding more trans-Atlantic flights from Lima, which would create an opportunity for Avianca-TACA to eventually build a long-haul hub at Lima to join Bogota, where the company currently deploys A330s on flights to Barcelona and Madrid. But in the short term Avianca-TACA could opt for caution and wait until the general economic situation in Europe begins an upward trajectory before adding long-haul flights to the continent from another South American base.

While both LATAM and Avianca-TACA have proven to be a positive influence on Peru’s domestic and international passenger growth, their competition in the country is indicative of broader implications of the mergers each company has completed during the last two years. With the two groups now becoming fierce competitors in Colombia, Ecuador and Peru, their face-off will only intensify as each group attempts to execute and deliver their promised merger synergies to shareholders.