Thai Lion has already overtaken Bangkok Airways and Thai Airways to become Thailand’s third largest domestic carrier after Nok Air and Thai AirAsia. Nok and Thai AirAsia are still about double the size of Thai Lion and are continuing to pursue domestic expansion. But Thai Lion is expanding faster, narrowing the gap with its LCC rivals.

Thailand’s domestic market grew by about 20% in 2014 and is on pace to grow at an even faster rate in 2015. LCCs have generated almost all of the growth and now account for nearly 70% of domestic passenger traffic in Thailand.

This is Part 2 in a series of analysis reports on Thai Lion, the Lion Group's cross border JV in Thailand. The first report focused on the resumption of international operations with the planned 15-Aug-2015 launch of services on the Bangkok-Singapore route and Lion Group’s overall expansion in the Singapore market. This report will focus on Thai Lion’s continued expansion in the domestic market.

After starting with only one domestic route, Chiang Mai, in late 2013, Thai Lion focused on domestic expansion in 2014. The LCC added five domestic destinations in 2014 as it expanded its fleet from two to eight 737-900ERs. All of its 737s are in single-class configuration with 215 seats.

Thai Lion took delivery of another five 737-900ERs in 1H2015, with most of the aircraft being placed into service in 2Q2015. Thai Lion has used the additional aircraft to launch two more destinations, Chiang Rai and Ubon Ratchathani, as well as add capacity on some of its existing routes.

Notes: based on current schedule on Thai Lion’s online booking engine
*other scheduled carriers include carriers operating from either Bangkok airport
Source: CAPA - Centre for Aviation

Nok has more domestic flights and the largest domestic network as it operates ATR 72 and Dash 8-Q400 turboprops alongside 737-800s. Thai AirAsia also has more than twice as many destinations as Thai Lion although it only operates A320s, which indicates there are still ample opportunities for Thai Lion to further expand its domestic network.

Thai Lion’s initial focus has been on trunk routes and providing sufficient frequencies to be competitive with Nok and Thai AirAsia. With the exception of Phuket, where slot constraints have limited Thai Lion to only two daily flights, Thai Lion has nearly as many seats and in a few cases more seats than its two main competitors.

With the recent addition of Chiang Rai and Ubon Ratchathani Thai Lion now serves nine of the top 10 destinations in Thailand including Bangkok (based on current seat capacity).

The only exception is Samui, but the popular resort island is not served by any LCCs as the Samui Airport is owned by Bangkok Airways. (The Samui Airport runway also cannot handle A320s or 737-900ERs, which would preclude any operations from AirAsia or Thai Lion.)

As it has now established a meaningful presence on the main trunk routes Thai Lion is expected to start competing soon with Nok and Thai AirAsia in some of the smaller domestic markets. Thai Lion has stated it plans to begin serving Nakhon Si Thammarat in Sep-2015 and add Phitsanulok and Khon Kaen by the end of 2015.

Thai Lion has not yet started selling flights on any of these potential new routes but all would be logical additions to its network. Khon Kaen, Phitsanulok and Nakhon Si Thammarat are the 11th, 12th and 13th largest market in Thailand based on current seat capacity. They are only slightly smaller than Thai Lion’s latest addition, Ubon Ratchathani.

Thai Lion will easily have the capacity to launch new domestic destinations in 2H2015 as well as continue to add frequencies on existing routes. Thai Lion expects to end 2015 with a fleet of 20 737-900ERs, which would require seven deliveries in 2H2015. The carrier is also not yet fully utilising all the additional aircraft it took in 2Q2015.

Some of the additional capacity will be allocated to the international market. In addition to Singapore, Thai Lion is looking at launching services to China and Taiwan in 2H2015. But most of Thai Lion's expansion will likely again be in the domestic market, particularly given the regulatory obstacles now confronting all Thai carriers seeking to expand in North Asia in the aftermath of the Thai DCA failing an ICAO audit.

Domestic demand has continued to grow steadily, making domestic expansion an attractive option. Domestic traffic in the Bangkok market increased by 19% in 2014 to 23.8 million passengers, according to Airports of Thailand data. The pace of growth has accelerated even further so far in 2015 with Airports of Thailand reporting a 27% surge in domestic passenger traffic at Bangkok’s two airports through the first five months of 2015 to 12.3 million.

The 6.6 million additional domestic passenger carried by LCCs over the first 17 months after Thai Lion launched have been roughly split equally between Thai Lion, Thai AirAsia and Nok Air. But Thai Lion is the main driver of the growth as its rapid expansion has led to faster expansion from the two established LCCs.

This is a remarkable figure, particularly as the combined domestic traffic for all the other domestic carriers serving the Bangkok market was roughly flat – at about 4 million including 3.7 million at Suvarnabhumi Airport and 300,000 at Don Mueang. (Suvarnabhumi is the hub for Thai Airways, Thai Smile and Bangkok Airways while Don Mueang also has a small domestic operation from Thai Smile and leisure carrier Orient Thai.)

Thailand’s three domestic LCCs have been able to stimulate rapid growth and have not been relying on taking market share from FSCs. The stimulation however has come at the expense of yields – as would be expected from the huge increase in capacity.

Demand is robust as Thailand’s middle class population continues to expand and Thais increasingly switch from buses and trains to budget carriers for domestic travel. But capacity has increased faster than demand, pressuring yields and profitability. Thailand’s domestic market will likely not be able to continue to support the very high growth rates it has seen over the last couple of years.

There will still be room for full service carriers offering domestic connections for long-haul passengers, particularly as all three domestic LCCs are based at Don Mueang while Thai Airways and foreign full service carriers are at Suvarnabhumi, where there are currently no domestic LCC flights. FSCs also continue to provide the only link to Samui, one of Thailand’s most popular tourist destinations.

Bangkok Airways is currently the largest full service carrier in Thailand’s domestic market with about 100,000 weekly seats including about 30,000 seats on the Bangkok-Samui route. While about 60% of Bangkok Airways’ domestic capacity is on routes served by LCCs its exposure is relatively limited as it has a fairly small presence in these markets, enabling it to focus on its niche feeding foreign carriers.

Thai Airways also has cut back its domestic operation in recent years, enabling it to focus more on connections to its long-haul network. Thai Airways is now the fifth largest domestic carrier in Thailand although Thai is still the third largest domestic player – ahead of Bangkok Airways and Thai Lion – when also including flights operated by its full service regional subsidiary Thai Smile. 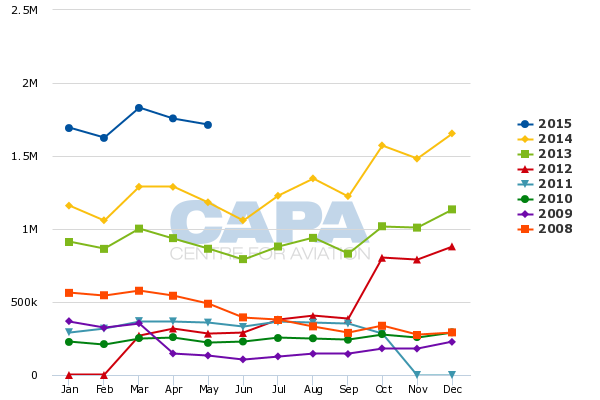 Note: Don Mueang was closed in late 2011 and early 2012 for flooding; Spike in Oct-2012 driven by move by AirAsia from Suvarnabhumi
Source: CAPA – Centre for Aviation & company reports

LCCs accounted for 96% of domestic passenger traffic at Don Mueang in the first five months of 2015 and currently accounts for about 95% of domestic capacity at the airport.

There are opportunities for LCC growth on point to point routes. But Thailand’s LCCs are expected to continue focusing primarily on expanding at Don Mueang, including new links from Bangkok to secondary cities. Smaller regional carriers such as Kan Air are generally better placed for the thinner point to point markets.

Thai Lion briefly operated in 2014 two secondary domestic point to point routes using an ATR 72 but dropped the routes and returned its only turboprop to the Lion Group after only about six months. Thai Lion’s focus is clearly now on establishing itself as a major player across all domestic trunk routes.

The Lion Group has been keen for Thai Lion to pursue strategic domestic expansion, concerned that if it waits it risks losing out to other carriers. The group has therefore been allocating more deliveries to Thai Lion than to its LCCs in Indonesia or Malaysia. In 1H2015 Indonesia’s Lion Air and Malaysian affiliate Malindo Air only took delivery of two 737s each while Thai Lion took five aircraft, according to the CAPA Fleet Database.

The focus on Thailand is poised to continue as seven more 737s have been allocated for Thai Lion in 2H2015. This is more aircraft than Thai AirAsia or Nok are planning to add for the entire year.

Thai Lion may not end 2015 with 20 aircraft, as there is always a lot of flexibility in the Lion Group fleet plan. But Lion’s focus is clearly on Thailand and – at least for now – primarily the domestic market.

It is hard to predict when Thai Lion or the overall Thai domestic market may reach a ceiling. The rapid growth recorded so far in 2015 by Thailand’s domestic LCCs will not be sustainable over the long term. But over the short term the expansion seems set to continue as Thai Lion has proven it is not afraid to battle longstanding LCCs Nok and Thai AirAsia.