Total domestic traffic in the Bangkok market was up 25% in 1Q2015, driven by a 45% increase by the LCCs. But domestic yields remain under pressure and overcapacity concerns are unlikely to ease given the continued rapid capacity expansion by all three of Thailand’s LCCs along with the planned launch of Thai VietJet.

Thailand’s short-haul international market is seeing a healthier demand-supply balance as demand has quickly recovered after a challenging 2014. A surge in visitor numbers from other Asian countries has particularly benefitted AirAsia, which is the largest player in Thailand's international LCC market by a wide margin. TAA profits increased nearly four-fold as TAA has a balanced domestic/international network while Nok's profits grew more modestly on a very low base as it relies almost entirely on the more challenging domestic market.

As CAPA analysed in a 20-May-2015 report, Thai Airways ended its streak of seven consecutive quarters in the red with a 1Q2015 net profit of THB4.541 billion (USD139 million) compared to a net loss of THB2.634 billion (USD81 million) in 1Q2014. The turnaround was driven by a dramatic improvement in Thai’s regional international operation, which recorded a 12.1ppt surge in load factor to 76.9%. Thai’s relatively small domestic operation also improved in 1Q2015 but its long-haul operation to Europe, where Thai still serves 12 destinations, continued to show signs of weakness.

As previously highlighted by CAPA, total visitor numbers to Thailand increased by 24% in 1Q2015 to 7.9 million, more than offsetting the 8% decline from 1Q2014 (based on Thailand Ministry of Tourism data). Other East Asian countries accounted for all the growth as visitor numbers from East Asia grew 56% to 4.9 million. As a result LCCs and full-service regional operators have been the main beneficiaries of the rapid recovery and resumption of growth in the Thailand tourism sector.

Bangkok Airways’ domestic passenger numbers grew by a more modest 6% to 1.0 million as its domestic load factor dropped by 0.6ppts to 76.2%. While Bangkok Airways’ largest domestic route is Bangkok to the popular resort island of Samui, where it owns the airport and accounts for nearly all seat capacity, it competes on most of Thailand's main domestic trunk routes against rapidly expanding LCCs.

In the regional international market Bangkok Airways relies primarily on passengers connecting from foreign carriers, which insulates it somewhat from LCC competition. As foreign full-service carriers have enjoyed a recovery in their Bangkok traffic, Bangkok Airways has seen an improvement in its international load factor and yield.

Bangkok Airways also performed relatively well in 2014 despite the difficult market conditions as it had the highest profit among the four publicly listed Thai carriers.

Of these four airlines, Bangkok Airways is the least exposed to the Bangkok market, an advantage in 2014 as the civil unrest was confined to the capital while other Thai markets were generally unaffected. Bangkok Airways currently allocates about 84% of its seat capacity to the Bangkok market compared to 87% for Thai AirAsia and about 99% for Nok Air and Thai Airways, according to CAPA and OAG data.

TAA revenues increased by 20% in 1Q2015 to THB7.734 billion (USD237 million). Note that figures used here are for Thai AirAsia rather than for parent company Asia Aviation.

TAA reported a 19% growth in passenger numbers in 1Q2015 to 3.7 million, including a 16% increase in domestic passengers to 2.3 million and a 24% increase in international passengers to 1.4 million. TAA seat capacity grew by 15%, resulting in a 3ppts improvement in seat load factor to 83%. 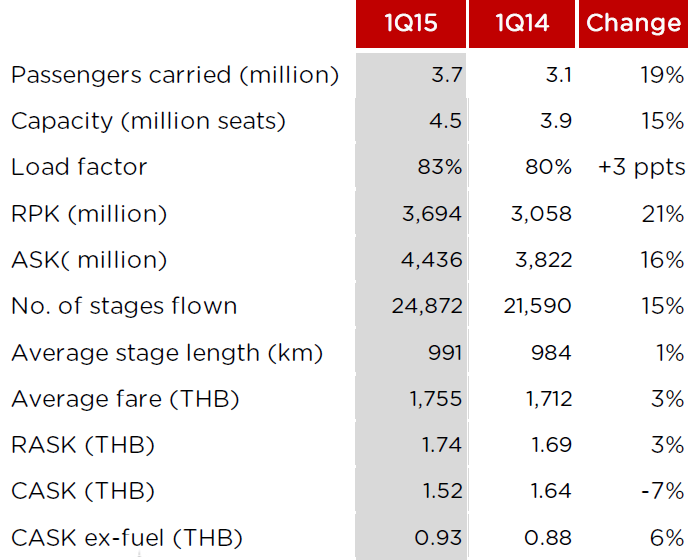 Yields also recovered as both average fare and RASK increased by 3%. TAA had seen a steady decline in yields over the last two years as competition intensified in the domestic market and as demand in the international market plummeted in 2014 due to the civil unrest. 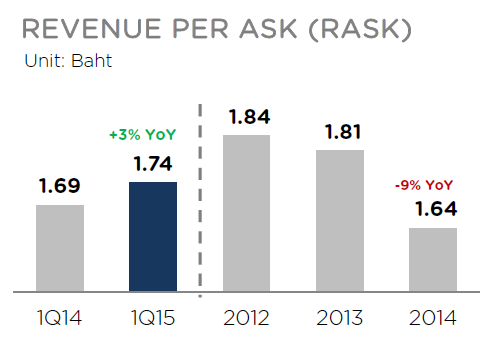 TAA has particularly benefitted from a recovery in the Thailand-China market. TAA currently accounts for 18% of total seat capacity between Thailand and China, according to CAPA and OAG data. Only Thai Airways/Thai Smile is bigger, with a 24% share, while China Eastern is the largest Chinese player with a 12% share. 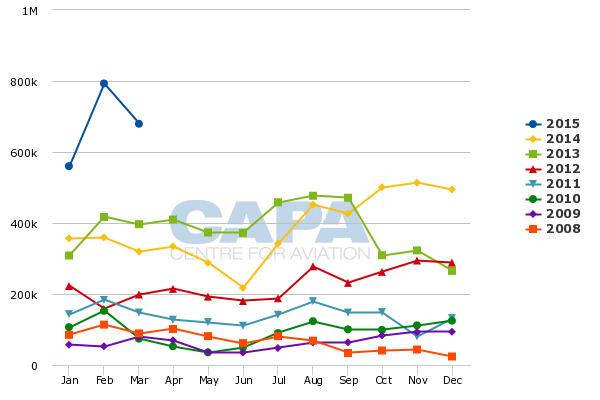 Source: CAPA - Centre for Aviation and Thailand's Ministry of Tourism 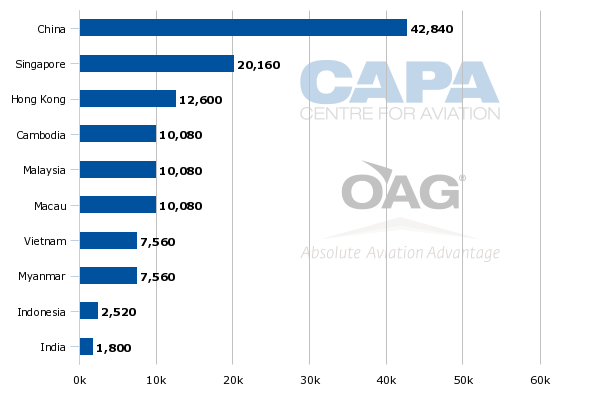 Thailand's short-haul international market within Southeast Asia has recovered, with visitor numbers from other ASEAN countries up 37% in 1Q2015. TAA is also by far the largest LCC in this market. As of the end of 1Q2015 TAA operated 30 international routes compared to only two for Nok Air and none for Thai Lion.

The AirAsia brand overall currently accounts for a 57% share of total international LCC capacity in the Thailand market, according to CAPA and OAG data. AirAsia is keen to leverage its leading position in the fast-growing and now fully recovered Thailand regional international market through expansion at TAA, new medium/long-haul LCC affiliate Thai AirAsia X and Malaysia AirAsia (MAA).

In Jul-2015 MAA is launching services from Kuala Lumpur to Pattaya and resuming services from Johor Bahru to Bangkok. Pattaya will become MAA's seventh destination in Thailand while Johor Bahru will become its eighth route in Thailand-Malaysia market (and the ninth Thailand-Malaysia route overall for the AirAsia Group as TAA operates Bangkok-Penang and shares the Bangkok-Kuala Lumpur route with MAA). MAA is already by far the largest foreign LCC in the Thailand market and currently accounts for a 13% share of total international LCC capacity in Thailand.

Nok Air profits improve by 36% but yields continue to decline

Thailand’s second largest LCC, Nok Air, reported a much more modest net profit in 1Q2015 of THB56 million (USD1.7 million), representing growth of 36% compared to an even smaller profit of THB41 million (USD1.3 million) in 1Q2014. Revenues increased 12% to THB3.316 billion, resulting in a net margin of only slightly more than 1%.

Nok’s significantly lower margin than the other Thailand-based publicly traded carriers can be partly attributed to its exposure to the domestic market. Nok is almost entirely a domestic carrier with only two scheduled international routes, one of which it launched at the end of 1Q2015. 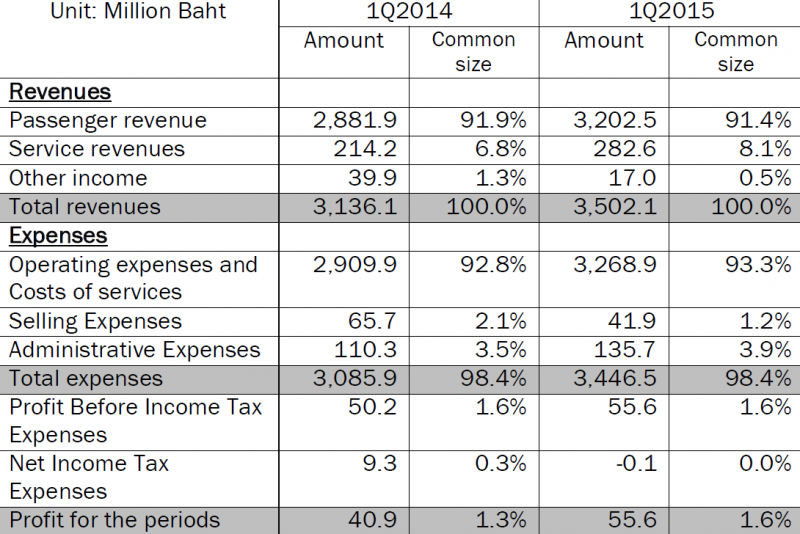 When including subsidiary companies Nok reported a break-even figure for 1Q2015 (a net profit of less than THB2 million). This includes some of the start-up costs and losses at new long-haul LCC joint venture NokScoot, which has encountered lengthy delays in launching services to China, Japan and South Korea. The 20-May-2015 launch of scheduled services by NokScoot and the expansion plans for NokScoot and Scoot in Thailand’s international market will be analysed in a forthcoming report.

Nok passenger numbers increased by 31% in 1Q2015 to 2.32 million. Almost all these passengers were in Thailand’s domestic market. Nok’s average load factor improved by 4.8ppt to an industry leading 84.7% but the increase in load factor came at the expense of yield.

Nok recorded a 13% drop in passenger yield and 6% drop in unit revenues in 1Q2015. Nok’s negative yield performance compared to rival Thai AirAsia, whose yields recovered, is of concern. Bangkok Airways also reported a 1% improvement in RASK (although its passenger yield declined due to the reduction in fuel surcharges).

Thailand’s domestic market has seen extremely rapid growth since the beginning of 2014, driven almost entirely by LCC expansion including start-up Thai Lion Air. Thai Lion launched services at the end of 2013 and is currently operating only in the domestic market, where it has quickly built up about a 13% share of seat capacity. 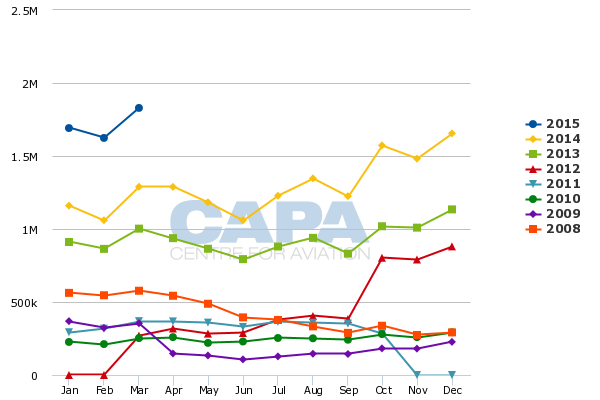 Note: Don Mueang was closed in late 2011 and early 2012 due to flooding
Source: CAPA - Centre for Aviation and airport reports

More than anything else the domestic declines at Suvarnabhumi indicates the continuing rise of LCCs in Thailand’s domestic market. LCCs have continued to grow their share of the domestic market but have also stimulated significant growth as lower fares persuade Thailand’s expanding middle class to trade in bus and train journeys for flights. Total domestic traffic in the Bangkok market (includes both airports) was up by 27% in 1Q2015 to 7.5 million passengers.

Domestic competition however has become irrational on an increasing number of routes, with unsustainably low fares. Demand is growing but capacity in many cases is growing even faster. The overcapacity situation is unlikely to ease anytime soon as Nok, Thai AirAsia and Thai Lion are all continuing to pursue rapid domestic expansion.

The expected launch of Thai VietJet Ar could exacerbate the situation in 2H2015 as a fourth LCC enters an already extremely competitive market. Thai VietJet’s launch is not a certainty as the start-up has repeatedly missed target launch dates over the last year, including most recently a late Mar-2015 date for the commencement of scheduled domestic services. But Thai VietJet is now preparing to launch services in Jul-2015 and is in the process of taking its second A320.

Thai VietJet has been operating a limited number of charters with one A320 since securing its air operators’ certificate in Dec-2014. The carrier is now aiming to operate domestic and international scheduled services from Bangkok Suvarnabhumi from Jul-2015, including to China and India. But regulatory constraints will likely initially limit Thai VietJet to the domestic market, further pressuring yields on domestic trunk routes.

China has particularly become strict on LCC start-ups and is not likely to approve flights from Thai VietJet in the initial phase. Japan and South Korea are not part of the Thai VietJet business plan but would not currently be feasible as Japanese and South Korean authorities are not currently permitting any new services from Thai carriers until Thailand’s DCA resolves the issues recently raised by ICAO.

In theory Thailand’s regional international market should be more appealing than the domestic market to Thailand’s fast-growing short-haul LCC sector. But for now it is mainly only Thai AirAsia and foreign LCCs pursuing these opportunities.

Total LCC international passenger traffic at Bangkok increased by 35% in 1Q2015 to 2.7 million. This includes 48% growth at Don Mueang to 1.7 million and 17% growth at Suvarnabhumi to just under 1 million. While Thai AirAsia, Thai Lion Lion and Nok all operate at Don Mueang along with its affiliates/partners (including Indonesia AirAsia, Malaysia AirAsia, Thai AirAsia X, Lion Air, Malindo, NokScoot and Scoot) almost all other foreign LCCs continue to operate at Suvarnabhumi.

The 1Q2015 figures show a recovery in the international market, driven by a surge in visitor numbers from other Asian countries. LCC international passenger growth slowed in Bangkok to a modest 6% in 2014 compared to 17% in 2013 due to the civil unrest in the Thai capital.

But LCCs have steadily continued to gain market share as FSC traffic in Bangkok declined in 2014. FSC traffic is now growing again but not as rapidly as LCC traffic.

Thailand (or Bangkok) has still not reached the LCC penetration levels of neighbouring Malaysia (or Kuala Lumpur), an indication there is still plenty of room for growth, particularly in the international market.

The domestic focus by all of Thailand’s short-haul LCCs – even Thai AirAsia is pursuing more domestic than international expansion in 2015 – will inevitably run its course.