Bangkok-Singapore is an extremely competitive route that is already well served by four LCC groups – AirAsia, Jetstar, Scoot and Tigerair. Lion Group’s entrance could be seen as a strategic move as it will give Lion a presence on all three of the largest routes from Singapore.

Lion Group’s share of Singapore’s LCC market will reach 8% in Aug-2015. Lion is still much smaller in Singapore than its rival Southeast Asian LCC groups but it is closing the gap as it expands at a time others have been reducing capacity.

Thai Lion has developed its network much differently from Malindo

While Thai Lion currently does not operate any international services, sister carrier Malindo has pursued ambitious expansion in the Malaysian international market since launching its first international route in Aug-2013, which came five months after its domestic launch. Malindo currently serves 14 domestic and 17 international destinations although it is only slightly larger than Thai Lion based on weekly seat capacity.

Thai Lion currently has most of its capacity on high frequency domestic trunk routes while Malindo has been taking a different approach, operating smaller domestic routes with turboprops and mainly using its 737 fleet for international flights. Thai Lion’s continued expansion in the highly competitive but fast growing Thai domestic market will be analysed in a second instalment in this series of reports on Thai Lion.

This report will focus on Thai Lion’s return to the international market and Lion Group’s overall position in Singapore.

Thai Lion has struggled in the international market

Thai Lion commenced international services more quickly than Malindo as it launched two international routes, Bangkok to Kuala Lumpur and Jakarta, alongside just one Thai domestic route in its first month of operation. But Thai Lion’s initial foray into the international market proved unsuccessful and it has since focused on domestic expansion.

Thai Lion handed over the Bangkok-Kuala Lumpur International route to Malindo in 2014, an indication of Malindo’s success at establishing its brand in the international market. Thai Lion also dropped services from Hat Yai in southern Thailand to Medan in Indonesia and Kuala Lumpur Subang in 2014 as it returned its only ATR 72 turboprop to the Lion Group.

Bangkok-Jakarta was dropped in early 2014. Thai Lion initially operated two daily flights to Jakarta but quickly cut back to one daily flight and ended up serving the route for several months with three to five weekly frequencies before deciding to axe it entirely.

Thai Lion is the only Lion Group option for Bangkok-Singapore

Bangkok-Jakarta is a much smaller and more seasonal market than Bangkok-Singapore and Bangkok-Kuala Lumpur. There are currently only about 10,000 weekly seats one-way from Bangkok to Jakarta with a similar amount of capacity provided by Indonesia AirAsia, Gaurda Indonesia and Thai Airways.

The Lion Group discovered Malindo was the better placed brand for the Bangkok-Kuala Lumpur market as most passengers on this route are Malaysians. Bangkok-Singapore is also mainly an inbound market but unlike in Malaysia Lion does not have a local brand in Singapore. As it is a large and potentially strategically important route the group has decided to give it a try using Thai Lion.

Thai Lion could face large challenges in making the Bangkok-Singapore route work, particularly during the initial phases. The route is extremely competitive and Thai Lion is not yet a recognised brand outside Thailand as it has so far focused on the domestic market.

Thai Lion will initially only serve Singapore with one daily flight. Starting with one flight reduces Thai Lion’s risk but inevitably it will need more flights to compete effectively against other LCCs. One flight gives the Lion Group an insignificant 3% share of total seat capacity in the Bangkok-Singapore market and only about a 6% share of total LCC capacity. 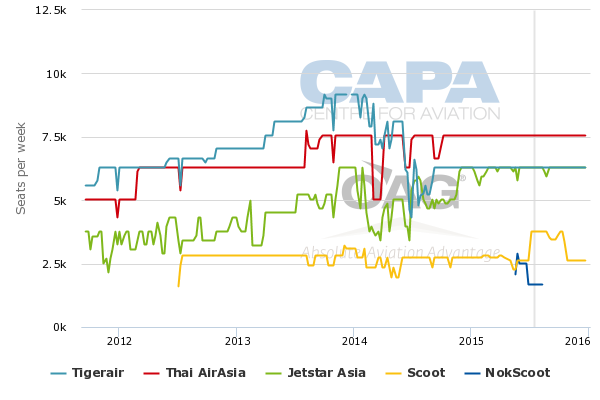 Scoot and Tigerair are both part of the Singapore Airlines Group, which also currently offers 37 weekly flights to Bangkok using its main full-service brand. Thai Airways currently operates 32 weekly flights between Bangkok and Singapore while Cathay Pacific, the only other full-service carrier operating non-stops in the Bangkok-Singapore market, has one daily flight. FSCs account for about half of total capacity in the market with SIA and Thai Airways each holding approximately 22% shares and Cathay Pacific a 4% share.

All the full service carriers serve the market from Bangkok’s main international airport, Suvarnabhumi, as does Jetstar and Tigerair. The AirAsia, Lion, Nok and Scoot groups all operate from Bangkok’s old and closer-in airport, Don Mueang.

NokScoot’s operation to Singapore is temporary as the start-up only decided to enter the Bangkok-Singapore market due to delays in securing permissions to serve North Asia. NokScoot launched services to Singapore in May-2015 and is now scheduled to suspend the route from 16-Aug-2015.

Thai Lion can be viewed as filling the void left by NokScoot as NokScoot’s current four times weekly frequency schedule with 777-200s has a similar number of weekly seats to Thai Lion’s once daily flight with 737-900ERs. The two carriers also have very similar schedules, with early morning departures from Bangkok Don Mueang and early afternoon departures from Singapore Changi.

But as NokScoot was only on the Bangkok-Singapore route temporarily it is not leaving much of a void. NokScoot also has struggled on the route with low load factors despite competitive pricing.

Thai Lion is also pricing aggressively, offering initial one-way base fares of THB245 (USD7) for both the Bangkok-Singapore and Singapore-Bangkok legs. Including taxes and fees the fare comes to THB995 (USD29) from Bangkok and TBH1,160 (USD34) from Singapore, or an all-inclusive total of only THB2,155 (USD63) for a return ticket.

While low fares are common between Bangkok and Singapore, fares this low are unusual. Thai Lion’s offer is particularly attractive as the airline includes 15kg of checked luggage and seat assignments with all fares. Meals including hot options and drinks are available for sale.

Lion Group grows its presence in the Singapore market

In addition to trying to woo passengers with very low fares Thai Lion will likely try to leverage cooperation with its parent as Lion Air is the largest LCC in the Singapore-Jakarta market. Lion currently operates 7x daily flights from Singapore to Jakarta, which gives it about a 43% share of LCC seat capacity on the world’s second largest international LCC route.

Lion only currently operates one route to Singapore, having dropped services to Surabaya and Ho Chi Minh in 2014 as it added capacity to Jakarta. But the group expanded its presence in Singapore in Nov-2014 as Malindo launched services in the Singapore-Kuala Lumpur market.

The Malindo expansion along with the upcoming launch from Thai Lion will give the Lion Group about 33,000 weekly seats in the Singapore market. This represents about a 8% share of total LCC capacity from Singapore.

In Aug-2014 the Lion Group only had about 21,000 weekly seats in the Singapore market, giving it about a 5% share of total LCC capacity. Over the last year the Lion Group has increased capacity in Singapore by more than 50% as most of its larger competitors have cut capacity.

While Lion is still much smaller in the Singapore market than rival LCC groups AirAsia, Jetstar or Tigerair, it will soon have a presence in the three largest routes from Singapore Changi. Singapore-Jakarta, Singapore-Kuala Lumpur and Singapore-Bangkok are also all among the five largest international routes in the world.

Lion's expansion in Singapore could just be beginning

Lion will likely to continue to pursue expansion in Singapore, including additional frequencies to Bangkok and potentially Kuala Lumpur. Lion may also look at more secondary routes similar to Ipoh but strategically it will be particularly keen to increase its market share on the main trunk routes.

With just two more daily flights to Changi, Lion would be able to overtake Cathay Pacific and Emirates to become the second largest foreign airline group in the Singapore market after AirAsia.

With four more daily flights Lion would be able to secure about a 10% share of Singapore’s LCC market, a noteworthy achievement given the large operations at Changi from AirAsia, Jetstar, Scoot and Tigerair.

There will be challenges as Singapore’s short haul market is extremely competitive and in some cases oversupplied. But, as the upcoming launch of Thai Lion in the key Singapore-Bangkok route highlights, Lion is not afraid to enter new battles with rival LCC groups and pursue strategic expansion.