Thailand’s domestic market has become a major battleground for three of Southeast Asia’s leading low-cost carriers. Thailand’s domestic LCC sector recorded passenger growth of over 30% in 2014 and could see similar growth in 2015.

But the growth has come at the expense of yields and profitability as all players have had to lower fares to compete. The outlook for 2015 remains relatively bleak as the price wars have continued.

Thai Lion has been the main provocateur, pursuing rapid expansion since launching services at the end of 2013. But Nok and Thai AirAsia have also been expanding rapidly, leading to overcapacity.

Thai Lion is particularly shaking up Thailand’s domestic market as it is accelerating expansion in a bid to gain market share. Thai Lion launched services in Dec-2013 with an initial fleet of two 737-900ERs and added six of the type in 2014. In 2015 the Lion Group affiliate is planning to add up to 12 737s, two of which have already been delivered, as it strives to end the year with a fleet of 20 aircraft.

Thai Lion has already added capacity so far this year across almost all of its domestic trunk routes and launched Chiang Rai, which became Thai Lion’s seventh destination from its Bangkok Don Mueang hub in early Apr-2015.

Bangkok-Chiang Rai is currently served with two daily flights. A third frequency is slated to be added from 24-Apr-2015.

With the introduction of Bangkok-Chiang Rai Thai Lion is now competing against Nok and Thai AirAsia on all seven of the largest domestic routes from Don Mueang (based on total seat capacity). Thai Lion has quickly established a significant presence in most of these markets. Just one year ago it was only competing on two of these routes.

Thai Lion was able to add second daily flight in late Mar-2015 on Bangkok-Phuket. At about the same time it added capacity to Chiang Mai, Krabi and Udon Thani although it reduced capacity to Surat Thani. The additional capacity as well as the launch of services to Chiang Rai was made possible by the addition of two 737-900ERs, which Thai Lion operates in single-class 215-seat configuration.

The two international routes at Hat Yai as well as two domestic point to point routes at Hat Yai (Hua Hin and Surat Thani) had been operated using an ATR 72, which was transferred to Indonesian sister carrier Wings Air in late 2014. After experimenting with one turboprop for less than one year Thai Lion decided to focus entirely on jet operations.

In addition to the seven domestic trunk routes Thai Lion still has one domestic point to point route, Hat Yai-Udon Thani, which it currently operates with five weekly 737-900ER flights. This service has to be maintained for Thai Lion to meet a Thai government requirement to allocate a certain amount of capacity on small regional routes which are not served by any carrier or at most one other carrier.

Thai Lion currently has about a 13% share of domestic seat capacity in Thailand compared to about 28% for Thai AirAsia and 25% for Nok. (Based on CAPA calculations for schedules commencing 6-Apr-2015; the current week commencing 13-Apr-2015 sees temporary seasonal increases for the Songkran or Thai New Year holiday.)

Bangkok Airways also has about a 13% share of domestic seat capacity. Thai Airways and Thai’s regional subsidiary Thai Smile combined has about a 20% share but individually each airline is now smaller than Thai Lion or Bangkok Airways.

Thai Lion’s share of the domestic market could approach 20% by the end of 2015 as it continues its rapid expansion. Thai Lion is expected to continue adding capacity on existing trunk routes while also launching new routes.

A resumption of international services is also likely in 2H2015 but the focus will continue to be on domestic expansion. Thai Lion’s priority for 2015 is to build up domestic market share. ICAO’s recent finding against the Thai DCA could also make it harder for Thai Lion to launch services to some international markets as the process of securing approvals from international authorities have become more challenging.

Thai Lion has indicated it looking to launch domestic services to Ubon Ratchathani followed by Khon Kaen and Trang. As CAPA previously highlighted, services to Nakhon Si Thammarsarat would also be logical as Ubon Ratchathani, Khon Kaen and Nakhon Si Thammarsarat are the only top 10 domestic destinations from Don Mueang that Thai Lion currently does not serve.

Rapid expansion by Thai Lion, Nok and Thai AirAsia drove a 39% increase in domestic passenger numbers at Don Mueang in 2014 to 15.6 million. Domestic traffic at Bangkok Suvarnabhumi, which handles all Bangkok flights from Thai Airways and Bangkok Airways and most Thai Smile flights, declined by 7% in 2014 to 8.3 million. 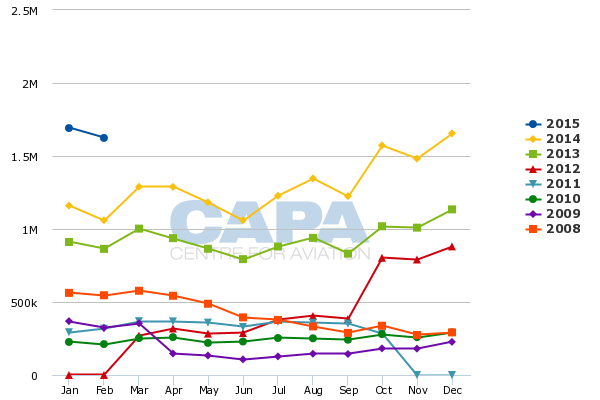 Note: Don Mueang was closed in late 2011 and early 2012 for flooding; Spike in Oct-2012 driven by move by AirAsia from Suvarnabhumi
Source: CAPA – Centre for Aviation & company reports

Nok and Thai AirAsia are also continuing to focus on domestic expansion. Such expansion could also be viewed as strategic as the two LCCs see a need to respond to the rapid growth at their younger competitor.

Nok is planning to add four aircraft in 2015 including two 737-800s and two Dash 8Q400 turboprops. Nok launched scheduled services to China at the end of Mar-2015 and is planning to launch services to Vietnam by the end of 2015. But once again most of its additional capacity will be allocated to the domestic market.

Nok currently operates only two scheduled international routes, linking Bangkok Don Mueang to Yangon in Myanmar and Nanning in China. International services accounted for only THB340 million (USD10 million) in revenues in 2014, or 3% of its total revenue stream.

A 13% reduction in yield and a 2.7pps drop in load factor to 81.3% contributed to the disappointing financial performance. As Nok is almost entirely a domestic operator this reflects the extremely intense competition and overcapacity in the Thailand domestic market. 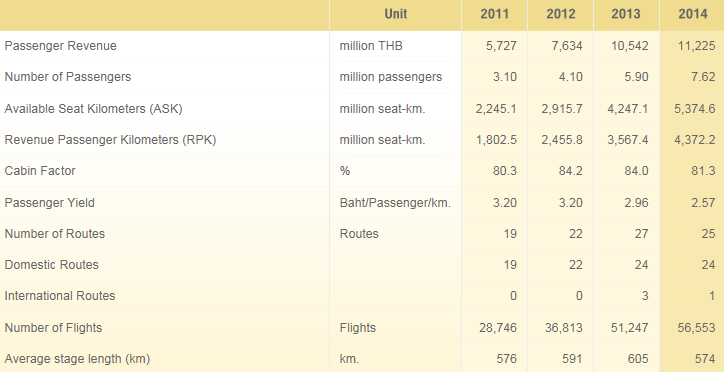 Thai AirAsia also recorded a 9% drop in yield (RASK) and an 8% drop in average fares for 2014 while its average seat load factor dropped 3ppts to 80%. 2014 marked the second consecutive year of yield declines for Thailand’s largest LCC. 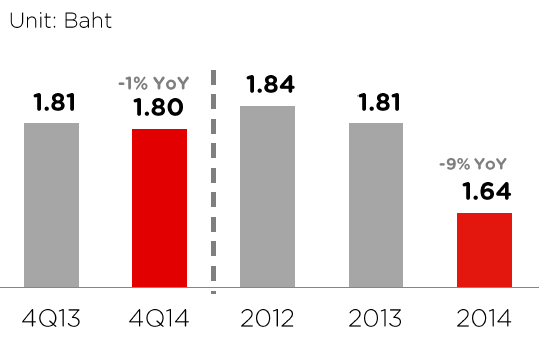 The challenging market conditions drove a 54% reduction in Thai AirAsia’s operating profit in 2014 to THB1.661 billion (USD51 million). The carrier’s net profit was down 83% to only THB335 million (USD10 million).

Thai AirAsia is confident it can improve both its yield and load factor in 2015. It stated in its 4Q2014 results presentation that it expects average fares will improve by 3% to 5% in 2015 as well a 3ppts improvement in load factor to 83%. But such targets could prove challenging as domestic competition continues to intensify.

In addition to rapid and aggressive competition from Thai Lion, Thai Smile is looking at expanding its operation at Don Mueang, where it now operates 10 daily flights across four routes. Thai VietJet is also expected to launch operations in 2015 – although it missed its earlier target of commencing scheduled domestic services by the end of Mar-2015.

Thai AirAsia is responding to the intensifying domestic competition by continuing to pursue rapid domestic expansion. While market conditions in Thailand’s short-haul international market have improved in recent months as inbound visitor numbers have recovered, Thai AirAsia is planning to allocate a majority of its additional capacity in 2015 to the domestic market.

Thai AirAsia is planning to add five aircraft in 2015, giving it 45 A320s. Thai AirAsia already has by far the largest fleet among Thailand’s LCCs.

Thai AirAsia in recent months has launched services to several secondary domestic destinations. Services from its Bangkok Don Mueang hub to Loei, Nan and Roi Et were launched in Feb-2015 and from Bangkok to Buriam at the beginning of Apr-2015. The expansion on regional routes, which were previously only served by Nok (generally using turboprops), can be viewed as move by Thai AirAsia to improve domestic connectivity and enhance its domestic network ahead of Thai Lion.

The more comprehensive domestic network also provides feed for AirAsia’s expanding international operation at Don Mueang, including new medium-haul flights from Thai AirAsia X. But it is questionable whether there is sufficient demand in smaller secondary markets to support two LCCs, particularly as AirAsia Thai only operates 180-seat A320s

Nok has been growing faster than Thai AirAsia

Number of domestic routes from Bangkok by carrier: as of early Apr-2015

Nok Air is expecting 18% passenger growth in 2015 to about 9 million. Thai AirAsia is expecting a similar growth rate in 2015 as it is targeting 14.5 million passengers. 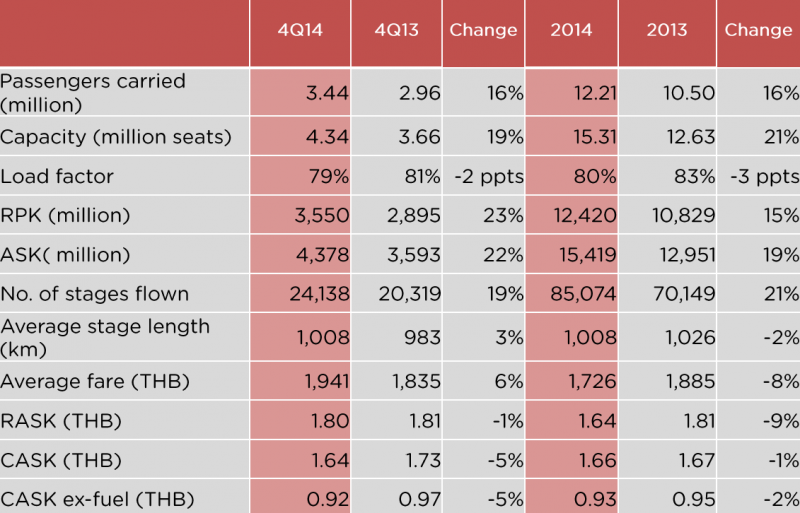 Nok and Thai Lion accounted for the largest share of the growth – with each carrying more than 1.5 million additional annual passengers – while Thai AirAsia carried 1 million more domestic passengers in 2014 compared to 2013.

Such rapid growth is not likely sustainable, suggesting capacity adjustments or consolidation may be around the corner.

Thailand’s domestic market has been a blood bath over the last year. At least for now there is no end in sight.