Competition in Thailand’s domestic market will intensify further in 2015 as Thai Lion Air pursues further expansion. Thai Lion has quickly established a significant presence on a handful of trunk routes and will likely be competing on all the main domestic routes of Nok Air and Thai AirAsia by the end of 2015.

The Lion Group affiliate launched services at the end of 2013 and already accounts for 17% of domestic LCC seat capacity in Thailand. Thai Lion could potentially capture a 25% share by the end of 2015 as it takes delivery of several additional 737s.

Seat capacity and passenger numbers in Thailand’s domestic LCC sector increased by over 30% in 2014. But the growth has come at the expense of yields and profitability. More rapid domestic growth is expected in 2015 and the intense competition could make it difficult for the market to return to profitability even with the reduction in oil prices.

As CAPA previously highlighted, domestic LCC traffic across the six airports operated by Airports of Thailand (AOT) increased by 32% in 2014 to 23.8 million passengers. International LCC traffic at the same six airports increased by a more modest 9% in 2014 to 11.2 million passengers. (The AOT portfolio includes six of the 10 largest airports in Thailand and over 85% of total seat capacity in the Thai market.)

Over the last decade the LCC penetration rate in Thailand has been consistently increasing. Full-service carriers ceded more market share to LCCs in 2014 as FSC domestic traffic at the six AOT airports decreased by 3% to 14.6 million passengers while FSC international traffic decreased by 9% to 40.9 million passengers. Thai Airways accounted for nearly the entire decline in the FSC sector as the struggling flag carrier’s passenger numbers dropped by 17% to 17.8 million, its lowest level since 2004.

Currently there are over 520,000 LCC seats in Thailand’s domestic market, representing an increase of over 40% compared to Feb-2014. Lion accounts for a 17% share of this capacity, up from only 3% in Feb-2014. Thai AirAsia has a leading 43% share with Nok slightly behind with a 41% share.

Thai AirAsia and Nok both focused on domestic expansion in 2015 as they continued to expand their fleets. Thai AirAsia added five aircraft in 2014 for a total of 35 while Nok expanded its fleet in 2014 from 17 to 24 aircraft.

Nok is almost entirely a domestic carrier with just one international route. Nok initially planned to pursue modest international expansion in 2014 but ended up again focusing on the domestic market.

Thai AirAsia has a sizeable international operation which accounts for about 40% of its total seat capacity. Thai AirAsia was initially planning to pursue a roughly even mix of domestic and international expansion in 2014 but also ended up focusing mainly on the domestic market.

Thai Lion focused entirely on domestic expansion in 2014 as it grew its fleet of 215-seat 737-900ER aircraft from two to eight aircraft. Thai Lion was initially planning to pursue a roughly even mix of domestic and international capacity in its first phase but its launch came just after the start of civil unrest in Bangkok. The resulting large drop in demand in the regional international market prompted Thai Lion to rethink capacity deployment plans – just as it did with Nok and Thai AirAsia.

Thai Lion has since added three more 737-900ERs, including two in late 2014 and one in Jan-2015. These aircraft have been used to add capacity across existing domestic routes.

Thai Lion has focused in its initial phase on establishing a sizeable presence on five domestic routes rather than trying to provide a comprehensive network.

Thai Lion is also only slightly smaller than its two competitors in the Bangkok-Surat Thani route. On Bangkok-Udon Thani and Bangkok-Krabi it is larger than one of its competitors but smaller than the other.

Thai Lion has an insignificant presence in the Bangkok-Phuket market but this is not intentional as slot constraints at Phuket preclude expansion for the time being. Its seventh domestic route, Hat Yai-Udon Thani, is a thin point to point route not served by another other carrier.

Overall Thai AirAsia currently has the same amount of capacity across the six routes it competes against Thai Lion as of Feb-2015. On non-competing routes Thai AirAsia has expanded capacity by 58% year over year.

The relative restraint shown by Nok and particularly Thai AirAsia is understandable as the routes Thai Lion have entered with multiple daily frequencies have become extremely competitive and are now suffering from overcapacity. The domestic routes Thai Lion has not yet entered are not as competitive. By building up capacity on these routes the two incumbents will also make it harder for Thai Lion as the start-up expands its domestic network.

Perhaps Nok and Thai AirAsia are trying to dissuade Thai Lion by placing a large amount of capacity on potential Thai Lion routes. But Thai Lion is not likely to respond to this pressure as its expansion is strategic and the airline is not expected to be profitable in its first three years.

Currently slightly over 50% of Thai AirAsia and Nok Air domestic capacity is allocated to routes that are also served by Thai Lion. Inevitably their exposure to Thai Lion will increase as Thai Lion expands.

Thai Lion has stated it plans to launch services to Chiang Rai and Ubon Ratchathani in 2Q2015 although it has not yet set a launch date. Both are logical as they are among the largest routes for Nok and Thai AirAsia that are not yet served by Thai Lion. Given Thai Lion’s strategy so far it is likely both routes will be served with several daily flights.

Once Chiang Rai (CEI) and Ubon Ratchathani (URT) are launched Thai Lion will be serving Thai AirAsia’s six largest domestic routes and six of Nok’s top seven routes. The largest remaining route would be Bangkok-Nakhon Si Thammarsarat (NST), which is currently served by Nok with five daily flights and by Thai AirAsia with four daily flights. 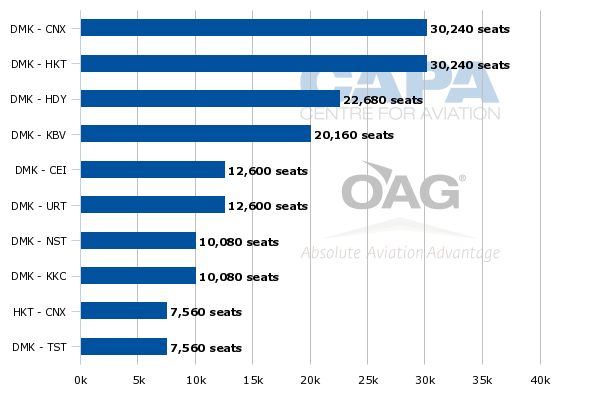 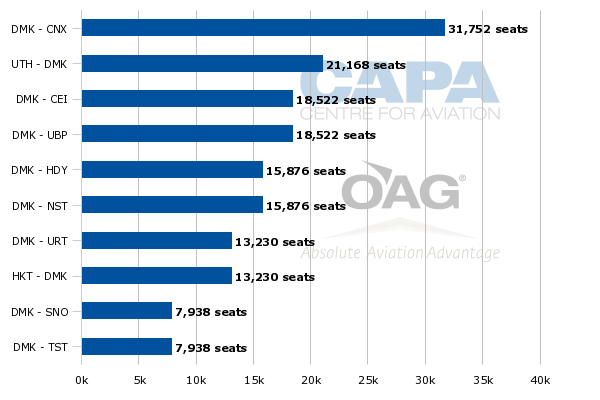 Other domestic routes in Thailand are relatively small and are served by at most five daily frequencies from Nok and Thai AirAsia combined. Sustaining three LCCs in such markets could prove to be challenging. Thai Lion also seems to be now focusing on trunk routes, having dropped an experiment with regional routes using an ATR 72.

Thai Lion quickly dropped Hat Yai-Kuala Lumpur and suspended the other three turboprop routes in late 2014. The ATR 72-600 has been returned to Lion Group, leaving it again with an all-737 fleet.

Thai Lion viewed the turboprop and second base at Hat Yai as a sort of experiment with regional operations. If the test succeeded it would have added more ATR 72s and potentially also used the aircraft type from its main base at Bangkok Don Mueang.

Nok has a fleet of turboprops based at Don Mueang, which it uses for thinner domestic routes. As CAPA wrote in Mar-2014:

Thai Lion views the regional routes as experiments as they were previously un-served. Turboprops were previously not in the Thai Lion business plan as the carrier was planning to keep a simple operation with an all 737-fleet. But the carrier’s executive team decided in early 2014 there were network opportunities that can only be tapped with smaller aircraft and that turboprops were a better option for meeting Thailand DCA requirements for operating regional routes.

Thai AirAsia and Thai Airways/Thai Smile meet these requirements by operating secondary routes with A320s while Nok and Bangkok Airways operate ATR 72s. Thai Lion initially planned to acquire 737-800s for thinner routes but switched gears just before the 737-800s were to be delivered and instead sourced ATR 72s from the Lion Air Group order book. The group has extensive experience with turboprops which were already operated in Indonesia by Lion Air sister carrier Wings Air and in Malaysia by Malindo Air.

The 2014 original fleet plan for Thai Lion envisioned eight additional aircraft consisting of two 737-800s and six 737-900ERs. Thai Lion is no longer planning to add 737-800s, which originally the carrier was going to take in Feb-2014. It still plans to take the six 737-900ERs, starting with the two aircraft received in Mar-2014. For now it only plans to take the one ATR 72-600 which has already been delivered.

Thai Lion ended up taking six additional 737-900ERs in 2014 as planned but decided to return its ATR 72. Thai Lion will instead meet Thai government requirements for allocating a certain portion of its capacity to regional routes by using its 737 fleet.

To qualify as a regional route it must be unserved or only operated by one other airline. Hat Yai-Udon Thani is the only route in the Thai Lion network currently meeting these requirements and will therefore likely be maintained. Thai Lion will likely also need to add at least one more regional route as it expands its domestic operation. These can be a point to point route connecting two secondary cities such as Hat Yai-Udon Thani or a route from Bangkok to a second or third tier city that is only currently served by one carrier.

Thai Lion’s decision to drop its turboprop operations leaves Nok as the only LCC with a turboprop fleet. Thai AirAsia has followed a different model and successfully expanded its domestic network without having to add a second aircraft type.

Thai AirAsia for example launched on 8-Feb-2015 services from Bangkok to three smaller destinations that were only previously served by Nok using its turboprop fleet – Loei, Nan and Roi Et. The three new routes gives Thai AirAsia 20 domestic destinations compared to 24 for Nok and only seven for Thai Lion.

The three new domestic routes are part of Thai AirAsia’s plans for further expanding domestic capacity in 2015. Thai AirAsia plans to add five more A320s in 2015 for a total of 45 aircraft. While Thai AirAsia also plans to pursue international expansion this year it will be not be afraid to pursue more strategic expansion in the domestic market.

Nok has stated it intends to launch services in 2015 to Ho Chi Minh, which was initially in its 2014 plan, as well as up to three destinations in China. But once again the focus will be on domestic expansion.

Thailand’s domestic market has become extremely competitive, provoking losses at both Nok and Thai AirAsia in the first three quarters of 2014 as yields plummeted. But neither carrier can afford to slow down as Thai Lion is continuing to pursue aggressive expansion. Thai Lion is expected to add up to 10 737s in 2015, giving it a fleet of up to 18 aircraft and raising the total single-aisle LCC fleet in Thailand to 94 aircraft.

Thai Lion is also planning to resume expansion in the international market in 2015. Thai Lion is particularly keen on serving China.

The Thailand-China market has recovered in recent months after seeing a dip for most of 2014 and should see high double digit growth in 2015. But competition in this market is also becoming intense as it is being targeted by all four of Thailand’s LCCs as well as several Thai leisure carriers including planned start-ups.

Thai Lion could face challenges in the international market as it has a relatively unknown brand. Also, the Lion Group overall has limited international experience and does not have any affiliate or subsidiary currently serving China.

Thai Lion will also have opportunities to expand its domestic operation further. By adding 10 aircraft and improving utilisation the LCC could potentially double domestic capacity in 2015, which would give it about a 25% share of total domestic LCC capacity, as well as add several international routes.

Although adding capacity and frequency can generate disproportionate additional traffic, rapid expansion comes with risks and challenges. Thai Lion is competing against two well established LCCs on routes which are generally suffering from overcapacity.

Recovering inbound visitor numbers to Thailand and lower fuel prices offer some relief. But more capacity is being poured in and competition remains aggressive. Thailand, particularly the domestic market, will be one to watch closely in 2015 as the battle between LCCs intensifies.