Thai Airways has returned to the black, posting a small profit for 2012 despite challenging conditions on its long-haul routes. The airline group plans to again focus growth in 2013 on short and medium-haul routes within Asia, where market conditions are generally more favourable. The group now includes three brands, including LCC affiliate Nok and regional hybrid unit Thai Smile – both of which are entirely focused on the fast-expanding Asian market.

But Thai Airways is also now facing challenges on routes within Asia as competition intensifies. Thai AirAsia is pursuing rapid expansion, putting pressure on Thai. Rapid growth at Nok and Thai Smile will help the Thai Airways Group compete against LCCs but Thai Airways will need to reduce costs and make adjustments in order to achieve sustainable profits.

These figures include Thai Smile as Thai Smile is a unit flying under the Thai Airways operators’ certificate and TG code, although there are plans to convert it into a fully-owned subsidiary. Thai also has three other business units covering cargo, grounding services and catering. 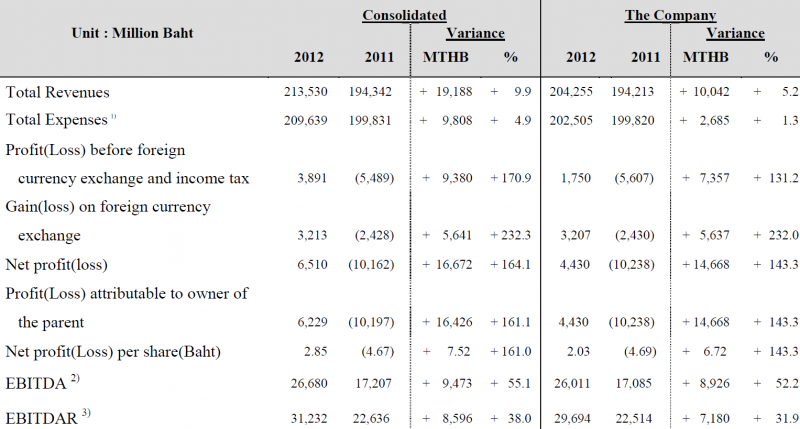 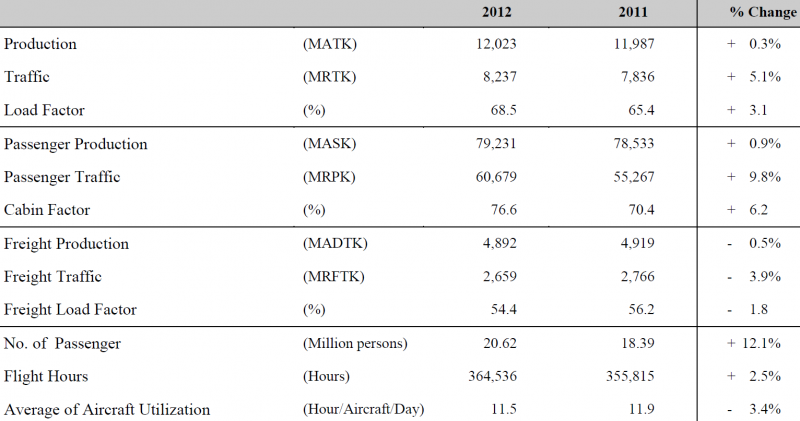 In releasing its 2012 results, Thai pointed out the 76.2% load factor marks its highest load factor in five years. But the higher loads came at the expense of yields.

Passenger yields (including fuel surcharges) were down compared to 2011 levels for nine out of the 12 months in 2012. However, they were up on 2009 and 2010 levels, when Thai reported profits.

Thai’s focus on regional markets helped drive the improvement in load factors and profitability compared to its disappointing performance in 2011.

International passenger revenues within the Asia region increased by 13% in 2012 to THB65.74 billion (USD2.21 billion) while revenues in intercontinental markets (includes Australia and New Zealand) dropped by 4% to THB53.88 billion (USD1.18 billion). Domestic revenues were up 6% to THB14.69 billion (USD494 million).

Thai Airways mainline also saw a 4.5ppt improvement in load factor on domestic routes to 76.7% as RPKs increased by 4% while Thai Smile recorded an 81.6% domestic load factor in its first year of operation.

Australia also performed well, with Thai’s load factor surging 10.5ppt to 77.7% on a 13% increase in RPKs. Thai will likely expand further in Australia, where it serves four destinations with 39 weekly return flights, as part of its increased focus on the Asia-Pacific region.

Thai is well positioned to take advantage of rapid growth in the Australia-Asia market but this is also a market being aggressively targeted by Qantas and the new Singapore Airlines-Virgin Australia combination. Both Qantas and its partner Emirates, which is by far the largest non-Asian carrier at Bangkok, serve Bangkok from Sydney.

On European routes Thai managed to improve its load factor by 5.6ppt to 77.4%. But RPKs were up only 2% and Thai had to rely heavily on promotions to keep its flights to Europe full.

Thai has warned that it expects continued weak travel demand to and from Europe. In a Jan-2013 presentation, Thai said yields on European flights were below target in 2012 and it continues to offer promotions for travel over the next three to six months.

Thai relies heavily on inbound traffic, making it more exposed to the economic downturn in Europe than other Asian carries. The weak economic conditions in Europe were bad timing for Thai in that the carrier took delivery in 2012 of its first batch of three A380s. After initially operating the A380 on regional routes, Thai began operating its new flagship aircraft on Bangkok-Frankfurt in Dec-2012 after taking delivery of its second and third aircraft.

Thai Airways will take delivery of its last three A380s in 2013, with one aircraft slated to come in Mar-2013, one in Oct-2013 and one in Nov-2013. Thai plans to use the fourth aircraft to begin A380 operations on the Bangkok-Paris route from 30-Mar-2013. It will continue to use the A380 to Hong Kong and Tokyo, illustrating the importance of regional routes.

See related article: Malaysia Airlines and Thai Airways focus on Europe rather than Australia with A380s

The new A380, which Thai operates in three-class configuration with 507 seats, supports the carrier’s increased focus on the premium end of the market. Thai has invested heavily in fleet renewal as well as cabin retrofits as part of an initiative to attract more premium passengers and increase yields.

The A380s are replacing ageing 747-400s on some long-haul routes. Thai currently operates 16 747-400 passenger aircraft but is phasing out four of the type this year. All of the 747s remaining in the fleet will be retrofitted with new seats and in-flight entertainment systems across all cabins by May-2013. 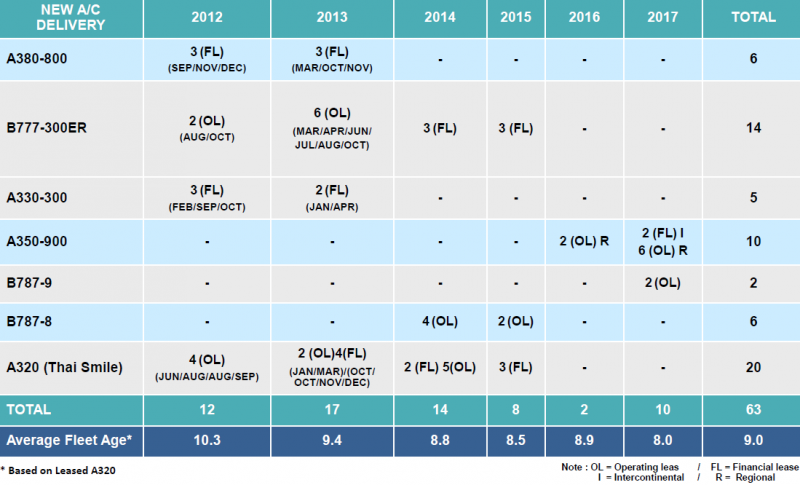 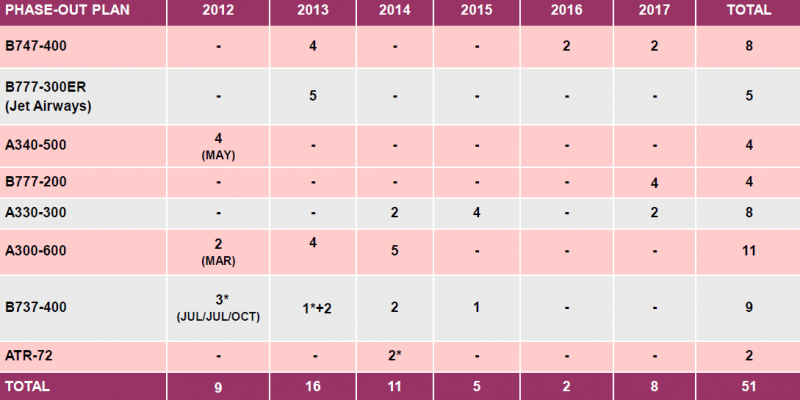 Thai is improving its domestic and regional international product as it phases out its nine remaining A300-600s over the next two years. These will be replaced partially by A330-300s, which Thai operates within Asia-Pacific, and partially by Thai Smile’s A320s. Thai’s remaining fleet of five 737-400s, which are used on a small number of domestic and short-haul international routes, will also be phased out by the end of 2015 as Thai Smile takes over Thai’s narrowbody routes.

Thai Smile is improving its premium product in 2013 by taking its additional A320s with a fixed business class. This will help improve Thai’s overall regional product as an increasing number of Thai and Star Alliance passengers, including premium passengers, connect at Bangkok Suvarnabhumi to Thai Smile-operated flights. Thai Smile’s hybrid model and fast-expanding network will be discussed in detail in a separate analysis article to be published later this week.

Nok has also been rapidly renewing its fleet, replacing 737-400s with 737-800s. Thai increased its involvement in Nok in late 2011 after upping its stake in the carrier from 39% to 49% and gaining additional seats on Nok’s board. Nok is now being prepared for an IPO and for the resumption of international services, as CAPA reported in an analysis article which was published last week.

Nok and Thai Smile are important components of Thai’s new multi-brand strategy, which is aimed at better capturing growth in the intra-Asia market while also fending off increasing competition. Thai mainline’s operation will also continue to expand within Asia-Pacific as the group tries to reduce its reliance on the challenging European market. Europe now accounts for 37% of Thai’s international ASKs. 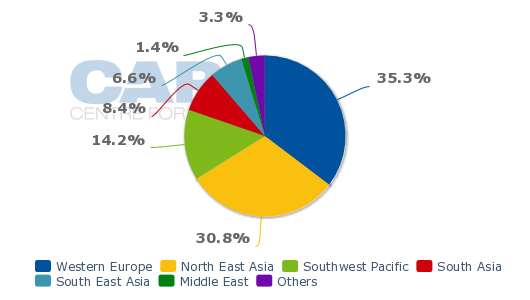 Asia (excludes Australasia) accounts for 46% of Thai’s international ASKs and 74% of its international seats. This will grow as Thai continues to expand within the region. The portion of the group’s capacity which is allocated to the Asian market will also grow as Thai Smile and Nok pursues rapid expansion.

But most of Thai’s competitors are also growing in the intra-Asia market, some at an even faster clip. SIA regional subsidiary SilkAir and Cathay regional subsidiary Dragonair, both of which have models that Thai studied closely before deciding to establish Thai Smile, are growing at high double-digit clips. Malaysia Airlines (MAS) is also focusing heavily on its regional network as it similarly tries to reduce its reliance on long-haul markets.

But LCCs pose the biggest threat to Thai, particularly Thai AirAsia. Thai AirAsia currently serves 13 domestic destinations and 19 international destinations, according to Innovata data. Its network will grow further in 2013 as it adds seven A320s for a total of 34 aircraft. Funds generated from a 2012 initial public offering are enabling Thai AirAsia to pursue accelerated expansion over the short to medium term. 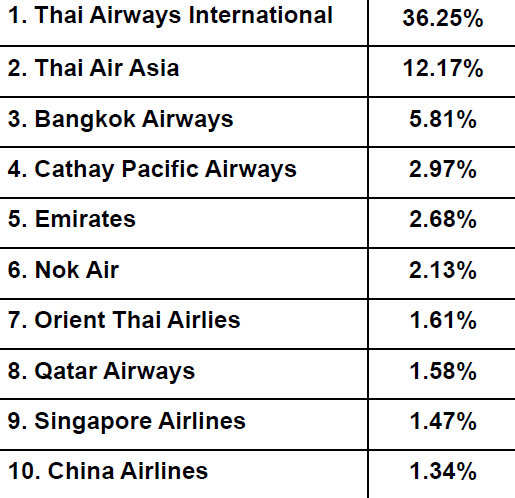 Thai Airways reportedly discussed possible cooperation with AirAsia during high level meetings in Feb-2013 involving Thai Airways' new president Sorajak Kasemsuvan and AirAsia Group CEO Tony Fernandes. But it is hard imagining significant cooperation between these competitors. In 2011 the AirAsia Group forged a partnership and stock swap with its Malaysia full-service rival MAS, but the deal was unbundled in 2012 and the two groups are no longer considering any form of partnership.

While a possible codeshare was reportedly discussed, this seems unlikely given Thai AirAsia on 01-Oct-2012 moved its entire base to Bangkok Don Muang Airport while Thai Airways has remained at Suvarnabhumi. As a result, it becomes very difficult for the two carriers to transfer passengers.

AirAsia’s move back to Bangkok’s old airport, which is closer to the city and less congested than Suvarnabhumi, could be seen as giving AirAsia a competitive advantage. But the Thai Airways Group also has a presence at Don Muang through Nok, and the AirAsia move has improved the situation at Suvarnabhumi to the benefit of its main user, Thai Airways. The airport had been operating above its capacity, leading to delays and higher operational costs for Thai Airways.

Thai AirAsia and Thai Airways are more likely to cooperate in the areas of aircraft maintenance and pilot training. The two carriers will certainly remain fierce competitors, with the Thai Airways Group using its mainline brand along with Thai Smile and an expanding Nok in an attempt to maintain its market share.

It will not be an easy battle as Thai AirAsia has a lower cost base than all of Thai’s brands. While Thai Smile has a lower cost structure than Thai mainline as it has adopted some aspects of the LCC model, it is a hybrid carrier with a medium cost base. Nok also is not a pure LCC, offering some frills such as checked bags and snacks, and has a low to medium cost base. AirAsia is a pure LCC with one of the lowest cost bases in the industry.

LCCs have doubled passenger traffic in Thailand since 2009

While Thai will never be able to match AirAsia’s costs structure, it needs to close the gap to be competitive. Thai recognises its costs are still too high despite years of reduction efforts. Thai has seen LCCs steadily expand their share of Thailand’s market at the expense of Thai but has still not done nearly enough to try to combat this trend.

LCCs have expanded over the last decade from essentially zero to penetrating almost 30% of Thailand’s total market. LCCs in 2012 accounted for 51% of domestic seat capacity in Thailand and 16% of international seat capacity, according to OAG data.

LCCs in the year ending 30-Sep-2012 accounted for 28% of passengers at major airports in Thailand, including about 50% of domestic passengers and about 16% of international passengers, according to Airports of Thailand data.

LCCs over the last four years have doubled their traffic at Thailand’s main airports to over 20 million passengers, including 13.5 million domestic passengers and 6.9 million international passengers. The rate of LCC growth has been equal in both the domestic and international markets, sandwiching market leader Thai Airways. 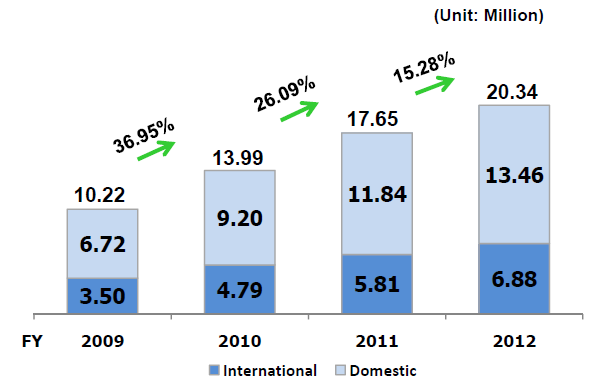 Thai Airways is again trying to further reduce its costs but will it be enough?

Recognising it needs to narrow the cost gap with LCCs, Thai says it is now deferring unnecessary investments and reducing personnel costs by cutting headcount and overtime expenses. It is also eliminating non-revenue tickets on high demand routes.

At the same time Thai is focusing on improving yield management by cutting unprofitable flights, adding frequencies on high demand routes particularly within Asia, adjusting flight timings to maximise demand, revising its fare strategy and driving its online distribution channel. Thai currently only sells about 10% of its tickets on the internet.

While Thai Airways has returned to the black, its profit margin for 2012 was only 3% and its outlook for 2013 and beyond is murky given the competitive landscape. The carrier has made the right moves in pursuing a multi-brand strategy and increasing focus on the regional market. But its lack of a true LCC will be exploited as LCC competition within Southeast Asia intensifies. Thai will also struggle to recoup its investments in improving its premium product as it does not have as strong of a product or as strong of a local premium market as SIA or Cathay.

Part Two of this report, to be published later this week, will look at the 2013 outlook for Thai Smile, including the upcoming expansion of its network.