Aeropolitical debate in recent times has highlighted how intertwined aviation is with the economy of the United Arab Emirates. However, attention is usually limited to Dubai and Abu Dhabi, only two of the seven emirates comprising the UAE. Sharjah's airport, next to Dubai, has been able to ride on demand, supported by AirArabia's base there. Now another airport – Ras Al Khaimah (RAK), more northeast from Dubai and Sharjah – is looking to grow its portfolio further.

RAK has focused on charter services, primarily from the UK, Germany and Russia. The latter is obviously slowing, but overall RAK wants to de-emphasise the waning charter segment. And although a new service from Qatar Airways will launch in Feb-2016, RAK is pinning its growth on low cost, offering lower charges than Dubai International or Sharjah, the airport said at the recent CAPA LCC Airports Congress in Bangkok. Its own local carrier RAK Airways failed twice, so instead for a local hub RAK turned to a partnership with Sharjah's LCC Air Arabia, which is due to have five aircraft based at RAK. Air Arabia (currently the only scheduled operator) and future carriers can serve two of RAK's main target markets: Saudi Arabia and India. Both face aeropolitical constraints, so other regional growth is more likely. RAK also hopes to attract services from Eastern Asia – perhaps one of the growing number of long haul, low cost operators.

RAK: serving different types of flights, but the future is low cost

Although RAK hopes to have service from a variety of carriers – full-service region, full-service long-haul, charter operators – it is the low-cost segment the airport has its eye on. There are separate terminals for arrivals and departures although the airport can handle connecting passengers. Air Arabia sells connecting itineraries through RAK, although some connections have long (even overnight) layovers. RAK sees its compact size being an advantage from the passenger perspective given small distances to travel to from arrival to the gate.

RAK's believes its experience with Air Arabia shows the benefit of a compact facility: Air Arabia's on time performance at RAK is 98% compared to 78% at Sharjah, according to RAK airport. (This could be impacted by aircraft utilisation levels.) RAK can handle over one million passengers per annum and RAK sees itself on track to handle 600,000. There are projects under way to expand the handling capacity. There are 19 parking stands, four departure gates, 12 check-in desks and two baggage carousels.

Passengers also benefit from free parking, providing an incentive to drive to RAK rather than use another UAE airport. Although RAK is not one of the UAE's main airports, it has found its fuel prices to be as cheap or cheaper than at Dubai International. Landing fees are approximately 25% less than at Sharjah, a low cost competitor also tapping into the Dubai catchment area. Slots and air traffic congestion are not a problem at RAK, unlike the UAE's major airports.

Cargo has a role at RAK, where cargo volumes are returning after going through other facilities. RAK enables trans-shipment as part of a free zone at the airport. Cargo can be repackaged and there are temperature-controlled units, such as for fruit and vegetables coming from Africa.

Dubai however is critical to Sharjah, whose passenger profile effectively makes it a low cost alternative to Dubai International.

While Qatar’s service may be important for its brand value, it is Air Arabia that RAK sees reflecting its future opportunity: having low cost flights to use RAK as an alternative to Dubai, and to stimulate local demand beyond what a full service carrier could do.

RAK has had two experiments with local carrier RAK Airways. Its most recent attempt re-launched in 2010 but was suspended in Jan-2014. RAK operated two A320s. A few months after RAK Airways' exit, Air Arabia in Apr-2014 announced it would open a base at RAK from the next month. RAK is Air Arabia’s only base in the UAE outside its home operation at Sharjah. Sharjah is 18km northeast of Dubai while RAK is 53km further northeast beyond Sharjah, making RAK a more distant alternative airport to Dubai than Sharjah.

Air Arabia has two A320s based at RAK compared to 31 at Sharjah as of Aug-2015. Air Arabia by the end of 2015 is due to place a third A320, and RAK expects in the medium term for there to be at least five A320s operating to 25-30 destinations, up from Air Arabia’s current 11 at RAK. In early Oct-2015, Air Arabia will operate 31 weekly flights from RAK compared to 530 at Sharjah. Four Air Arabia destinations from RAK are each served four times weekly (the highest frequency), three are served three times weekly each and three are served twice weekly.

Comparison of RAK Airways and Air Arabia destinations from RAK: 2010-2015

Only three of Air Arabia's top 10 destinations at Sharjah see service at RAK. This compares to when flydubai announced its Dubai International hub would be complemented with new flights from Dubai Al Maktoum.

Five of flydubai's initial seven Al Maktoum routes are among its 10 largest routes at Dubai International. Some of Air Arabia's Sharjah routes cannot be replicated at RAK due to aeropolitical reasons. It is not all loss since RAK offers different opportunities: from RAK Air Arabia serves Lahore and Islamabad, which it does not serve from Sharjah.

Based on scheduled seat capacity as supplied to OAG, Air Arabia’s RAK operation has not yet surpassed that of RAK Airways. 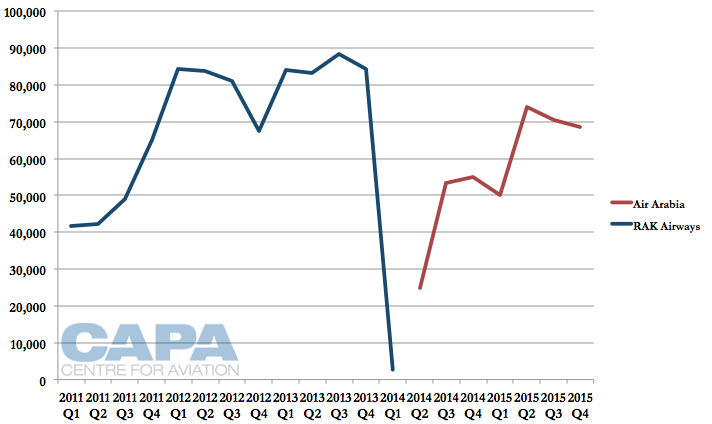 RAK has relinquished the flag carrier status of having a locally named carrier and the direct control – network planning, growth – that permits. Air Arabia arguably brings greater brand recognition (and its broad name does not invite conflict, as might a RAK-based operation of flydubai – unlikely as that concept may be).

Practically, Air Arabia can also leverage its scale and processes across its operation (which includes affiliates in Egypt, Jordan and Morocco).

As might be expected across the Gulf, India is a large and under-served opportunity from RAK. RAK sees Indian services from Air Arabia’s local operation as well as from Indian carriers.

Accessing India from RAK is problematic; as with other emirates, bilateral limits bite. The Indian government has granted only 1,400 weekly seats (the equivalent of eight Air Arabia A320 flights) to India from RAK-based carriers. (In markets such as India, each emirate negotiates its own bilateral; there is no single bilateral covering the entire UAE.)

Further, this capacity allotment can only be used to three cities stipulated by the Indian government: Cochi, Kozhikode and Thiruvananthapuram. Notably, this excludes India’s major cities. RAK Airways had only provided service to Kozhikode.

RAK hopes to loosen the bilateral, and some access to key metropolitan Indian cities would quickly improve its fortunes given the restrictions faced elsewhere in the UAE. However, this seems most unlikely under the Indian government’s bilateral approach. An Indian government statement in Sep-2015 said Air Arabia would be able to use the 1,400 weekly seats but made no mention of further growth.

As Indian airline traffic to Dubai is highly price sensitive, RAK sees an opportunity to use its lower charges to stimulate new growth or shift traffic away from Dubai and Sharjah. 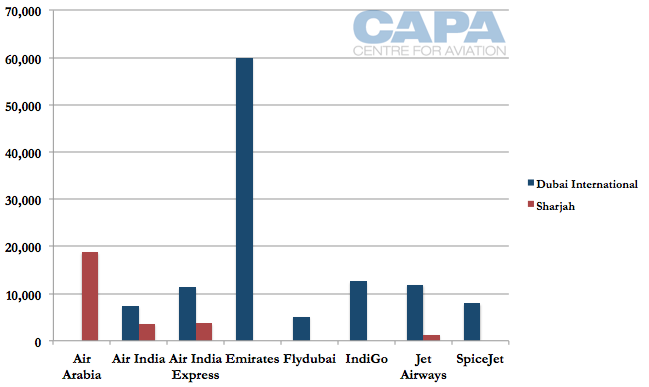 Saudi Arabia is a large opportunity regionally, but there are also bilateral restrictions

Besides India, the Kingdom of Saudi Arabia is a market RAK airport sees having large potential. Dubai and the broader UAE are popular destinations for Saudis. In 2014, Saudis comprised the largest share (10%) of Dubai's tourism, which saw 13.2m visitors. 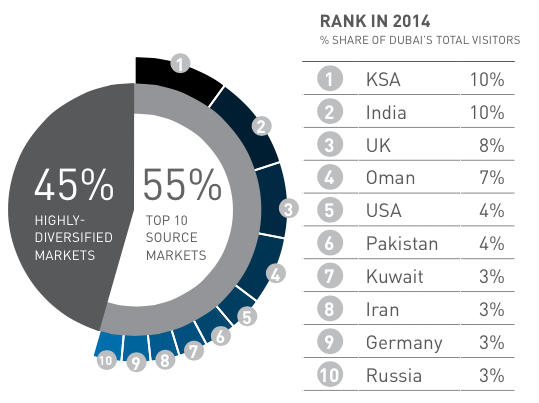 Although the aeropolitical situation with Saudi Arabia is not as restrictive as with India, RAK faces constraints. The airport notes it is unable to put in services to Riyadh.

After India and Saudi, the Far East is RAK’s other big focus for new air services. RAK would like to see services to China and Malaysia (Thailand is a popular outbound market for UAE residents, but already sees large capacity from Emirates and Etihad).

But more immediately, RAK could gain service from Filipino LCC Cebu Pacific, whose Middle East long-haul flights almost exclusively cater to the large Filipino workforce in the region. Cebu’s inaugural Middle East point was Dubai, but during Dubai’s 2014 runway works, Cebu shifted the flight to Sharjah. Cebu was pleasantly surprised with its brief stint at Sharjah, in part because of the opportunity for passengers to use Air Arabia’s hub and connect to other points in the region. Cebu has considered a Sharjah service to supplement its Dubai operation.

Air Arabia’s smaller size at RAK would offer fewer connections than at Sharjah. This would make a potential Cebu operation at RAK focused on RAK being a low-cost alternative to Dubai and Sharjah.

RAK says it is in discussions with Royal Brunei Airlines to move its Brunei-London stopover from Dubai to RAK. Dubai and London are strategically important links for Brunei, which owns Royal Brunei. London also cannot be served non-stop from Brunei with its current fleet (787-8s are its only widebodies), so the Dubai stopover works operationally and allows Royal Brunei to combine two strategic markets.

Royal Brunei is also able to pick up local traffic between Dubai and London, but overall Royal Brunei’s long haul network is loss making. Royal Brunei’s only other long haul point is Australia’s Melbourne, enabling Royal Brunei to sell two-stop Melbourne-London traffic, which is important but still relatively small. Although Royal Brunei may welcome the opportunity to further reduce costs, moving from Dubai to RAK may not be commiserate with Brunei wanting a certain level of prestige from its flag carrier.

Outlook: How willing are the region's passengers to use low-cost facilities?

It may seem a tough challenge to persuade airlines to leave Dubai International's Terminal 2 for RAK. Few have built up sizeable operations at closer Sharjah. Air Arabia accounts for 83% of scheduled seat capacity (see below graph).

Moving further away from Dubai – the area's main draw – involves some risk. Then again, if RAK can deliver on the low cost infrastructure and rates it promises, its charges may be substantially lower than Sharjah offers, compared to Dubai International. 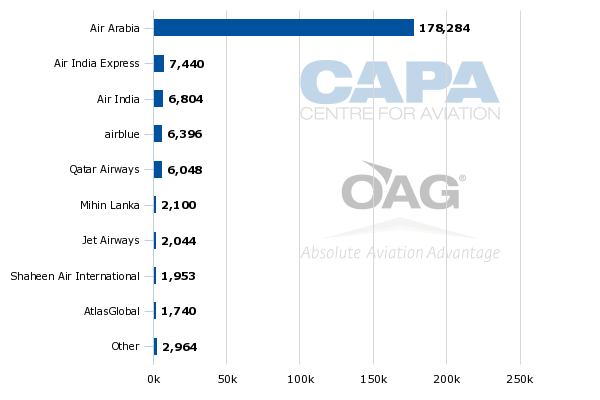 RAK unfortunately has no great bilateral resources it could exploit to gain an advantage over Dubai International or Sharjah. Indeed, it seems the opposite, with RAK restricted on UAE entitlements, necessitating foreign carrier service. Indian LCCs have demonstrated low-cost credentials while the Middle East's LCCs are more hybrid operations, adding cost simply because passengers demand it. Air Arabia's A320s are generally in a medium/high density configuration of 168 seats, not the previous maximum of 180 or new maximum configuration of 186 seats. Air Arabia even boasts: "All Air Arabia aircraft cabin interiors are fitted with a world-class comfort seats offering highest seat pitch of any economy cabin across the globe". AirAsia and Ryanair cannot make that claim.

RAK will be a test of how far passengers are willing to travel to use secondary airports. RAK's distance – 70km from Dubai – may not be unusual with secondary European airports, but is new to the Middle East. Its location east of Dubai could be challenging as Dubai increasingly moves west towards the new Dubai Al Maktoum facility. Once up and running, Dubai Al Maktoum will take flights from Dubai International, allowing Dubai International to focus more on regional services – perhaps at the expense of Sharjah and RAK.

But logic and convenience can quickly go out of the window when there is a lower price tag. RAK and its airline partners (and they will be partners in promoting a low-cost facility) must work on infrastructure but also the more complex and vague task of educating consumers and ultimately changing their mindsets.