Several Eastern European flag carriers are clearly struggling as competition in their markets, particularly from low-cost carriers, continues to increase, threatening their survival as independent entities. Many of these carriers are reliant on regular capital injections from their respective governments simply to maintain operations. In an effort to ensure their long-term survival and a more sustainable future, several are seeking to secure strategic partners in 2012.

Being acquired by, or partnering with, larger airlines from Turkey and the Middle East is proving to be the most likely of scenarios for these Eastern European operators as Western European airline groups are attempting to reduce expenditure significantly in 2012. While Turkish Airlines and the three major Gulf carriers have the cash and interest to pursue investments in Eastern European carriers in 2012, such investments do not appear to be on the radar at all for Western airlines.

LOT Polish Airlines is the most recent of Eastern European carriers to make headlines over being potentially acquired by another carrier. Recent statements by Turkish Airlines indicate it is interested in acquiring the fellow Star Alliance carrier, with Turkish stating it will soon commence talks to acquire the Polish flag carrier. Turkish chairman Hamdi Topçu stated, “many airlines have proposed partnerships with us. We have decided on LOT Airlines after analysing [the offers]. The official negotiations will start as soon as possible.”

Turkish and LOT share Western Europe as their key focus market but otherwise are completely different carriers. Turkish has an extensive long-haul network while LOT's focus is more regional. This regional focus, however, is changing slightly as LOT implements its new strategy of “east meets west”. Under this, it aims to expand its Asian network and feed traffic between the east and west through its Warsaw hub - something that would appear to mesh with Turkish Airlines' strategy. 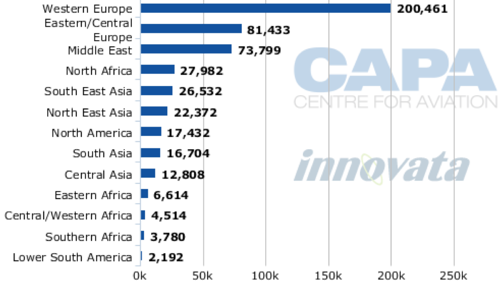 LOT meanwhile has a much more regional capacity profile: 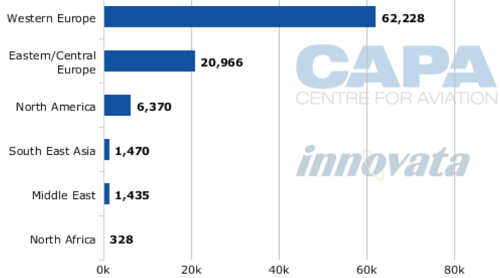 The airlines are also different in that one is clearly in growth mode while the other carrier has been looking to reduce losses. Over the past year, LOT’s traffic has not grown whereas Turkish has seen further rapid growth.

Turkish aiming to have the world’s largest network by 2023

Turkish Airlines is extremely ambitious, aiming to have the world’s largest airline network by 2023. The airline currently has the eighth largest network. Although most of its growth has been organic, acquisition of other carriers is clearly one option to help Turkish reach its goal.

LOT Polish Airlines is not the only carrier Turkish has been considering. Turkish has also been reported to be interested in potentially acquiring government-owned CSA Czech Airlines, which has been undergoing a restructuring process. Other Eastern European carriers eager to secure strategic investors are also likely to court Turkish, particularly Slovenia’s Adria Airways as Adria is also a Star member.

Turkish was also involved in lengthy negotiations in 2010 to acquire Serbia’s JAT Airways but failed to reach an agreement. The Serbian Government issued another tender for the sale of the carrier in Aug-2011. However, this second attempt failed with previous airBaltic owner, Baltic Aviation Services, withdrawing from the latest tender in Dec-2011. JAT is now planning to undergo a major restructuring in 2012, which is expected to see its workforce reduced from 1200 to 700 employees.

Another Eastern carrier Turkish has been involved with is Bosnia and Herzegovina’s national carrier B&H Airlines. Turkish purchased a 49% stake in B&H Airlines in Dec-2008 with the Government keeping the remaining 51% stake. Turkish was reportedly sought to acquire the Government’s remaining stake in early 2011, however this has not yet amounted to anything.

Other carriers looking for partners

A number of other Eastern European airlines are also searching for strategic investors in the near future such as Hungary’s Malev, Latvia’s airBaltic, Romania’s TAROM and Montenegro Airlines. These are primarily full service legacy flag carriers whose older, high cost models are being aggressively challenged by competition from the region's low-cost operators.

The following table summarises the status of these airlines’ privatisation plans:

With so many airlines from one region in the market for strategic investors in 2012, the challenges are obvious. The current economic situation in Europe makes it increasingly difficult to attract financial investors and there is a distinct shortage of wiling airline buyers. Perhaps the most positive news however is that the regulatory climate is much more encouraging today for the handful of airlines which do want to invest across borders. Nonetheless, with most of these flag airlines comes an often unattractive bundle of old-fashioned nationaiistic baggage, as national interest continues to be equated with the possession of a flag carrier.

Potential suitors are limited for the ailing Eastern Europeans

Turkish and Middle Eastern carriers are proving to be the most likely of all to consider taking over any of the struggling Eastern European carriers.

Qatar Airways is now looking to Europe for potential acquisitions with CEO Akbar Al Baker stating the carrier has identified potential acquisition targets and will “look at every business opportunity we get” to ensure it “grows in a very sustained environment”. Qatar has not yet acquired another passenger carrier (last year it acquired 35% of Luxembourg-based cargo carrier Cargolux) but is clearly more than an interested observer. An acquisition in Eastern Europe offer a logical extension of its regional network.

Etihad Airways is also very much in buying mode. The UAE flag carrier last month increased its stake in Air Berlin to 29% in Dec-2011 and earlier this month announced its intention to purchase 40% of Air Seychelles. With Etihad wishing to expand its influence, it is likely to be keeping a watch on developments in Eastern Europe.

A few years ago Lufthansa and Air France would have been seen as logical suitors for Eastern European carriers, seeking to entrench their respective alliance status to the east. But neither group is likely to pursue further acquisitions in 2012 as they focus instead on reducing expenses and digesting their multiple purchases of recent years. British Airways and Iberia parent, International Consolidated Airlines Group (IAG), is in a buying mood this year but Eastern Europe is apparently not seen as its priority region for making a move (although, as the dynamics shift with other airlines acquiring new access, it would be reasonable to assume that each of these major Europeans will be keeping a watching brief, ruling nothing out).

As the wait continues for the other Eastern European carriers which are seeking strategic investors, their owners will probably become more willing to reduce the restrictions they are currently imposing on buyers.

With sellers outnumbering investors and survival options steadily diminishing, the pressures to strike long term bargains are mounting. That does not necessarily mean that the governments involved will suddenly be enlightened with new streams of logic, but as the small number of potential airline buyers pick off the more attractive offerings, the others face a real risk of being left out in the cold.