LOT Polish Airlines is progressing with its new “east meets west” network strategy in 2012 as it prepares to launch service to Beijing, its second Asian destination, in June. Another milestone for LOT will be reached in 4Q2012, when the carrier is slated to become the first European operator of the Boeing 787. Privatisation is also a possibility for LOT in 2012 although given current market conditions this is looking increasingly unlikely.

LOT has eight 787-8s or order, which were previously expected to be delivered form Apr-2012. The carrier says it is now expecting to receive its first 787 in 4Q2012 and take delivery of five aircraft within a three-month period.

The Polish flag carrier will use its first batch of five 787s to quickly replace its Boeing 767s. The carrier currently has four 767-300ERs in service with a fifth aircraft on the ground following a gear up landing incident in Nov-2011. The rapid replacement of the 787s with the 767s will give LOT a streamlined fleet of three aircraft types consisting of 787s, Boeing 737s and Embraer EJets but the carrier is aiming to further reduce this over the medium-term to only two types: 787s and EJets.

LOT currently uses its 767s to operate its long-haul network, which consists of only five destinations: Hanoi, Chicago, New York JFK, Newark and Toronto. LOT has been looking to expand further in Asia, in line with its new “east meets west” network strategy. Under this strategy the airline is increasing its focus on providing connections from Europe to Asia and the CIS region.

LOT expects transit traffic at Warsaw Chopin Airport, where only 10% of total passengers now transit, will at least double as the carrier implements its new strategy. The carrier also has been working with Chopin Airport to improve their transit product and shorten connection times. LOT earlier this month announced that starting later this year LOT and Chopin Airport will be able to support minimum connection times of only 30 to 40 minutes, depending on the destination. 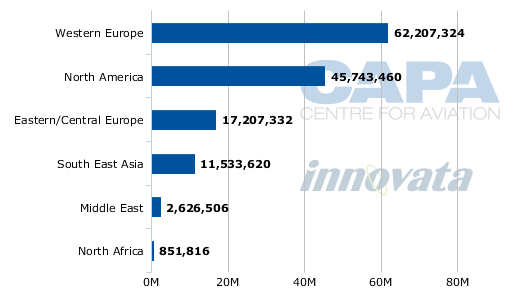 Beijing to be first of several potential new Asian routes

Beijing will be LOT’s second Asian route under its new network strategy, following the launch of Warsaw-Hanoi service in Nov-2010. LOT last month announced that Beijing, which LOT last served in the 1990s, will be launched in Jun-2012 with cooperation from Star Alliance partner Air China. No carrier currently operates non-stop services between China and Poland.

LOT was originally aiming to add Asian routes in 2Q2012 with its new 787 fleet. But further delays in 787 deliveries means LOT will launch Beijing with 767s and upgrade the route to 787s in late 2012. Beijing is expected to initially be served with three weekly flights but LOT is aiming to upgrade the service over the medium-term as its 787 fleet expands.

LOT also has been evaluating new potential destinations in Japan and China including Tokyo, Shanghai and Shenzhen. LOT recently received approval from the Russian Federation to fly over Siberian airspace, opening more possibilities for Asian routes.

More Asian routes will likely not be launched until the second batch of 787s is delivered. With its initial fleet of five 787s LOT is looking at potentially adding at least one Asian destination although it is also considering dropping Hanoi.

The Hanoi service, which operates three times per week and is currently LOT's longest route, has been successful from a demand perspective, attracting average load factors of about 90%. As CAPA reported in Jun-2011:

The route has been a good test of LOT’s new model of focussing more on transfers. LOT CEO Marcin Pirog says 75% of the tickets on the Hanoi service are sold in Europe but outside Poland, primarily in France and Scandinavia.

But Mr Pirog acknowledges the Hanoi route is primarily a leisure route and may lack the business demand to support the 787. As a result, once LOT phases out its 767s it may drop Hanoi in favour of another Asian destination with higher demand for the premium cabin.

The increased focus on the premium product that will come with LOT’s 787s may also prompt the carrier to adjust its North American network. LOT has been looking at potential new destinations in North America although these will not likely be launched until the second batch of 787s is delivered. LOT's final three 787s, which will primarily be used for further Asian expansion with some North American expansion a possibility, are slated for delivery in 2014 to 2016, according to OAG Fleet iNET.

LOT is banking its new network strategy and 787s will help it improve its financial position, which in turn will make it a more attractive target to new investors. The Polish Government haw been considering a possible privatisation but given current economic conditions in Europe and the delays in the 787 deliveries it seems increasingly unlikely there will be a sale in 2012.

The timing of the privatisation is in the hands of the Government rather than LOT’s management team. The Government initially set in 2010 a privatisation target of 3Q2011 but has since delayed the process. The Government is essentially now waiting until the carrier is strengthened operationally and financially, with the objective to make it a viable independent operator rather than an ailing carrier that would have to be swallowed and restructured by a large airline group.

LOT already has improved its financials since the new management team led by Mr Pirog took over in 4Q2010 and implemented a cost cutting programme. Through the first nine months of 2011 LOT narrowed its losses to EUR12 million from EUR22 million over the same period in 2010. 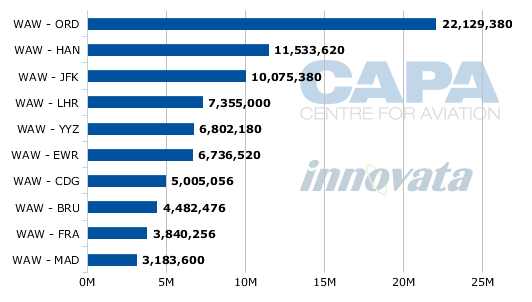 Fleet modernisation is designed to result in operational improvements and make LOT a more efficient and viable carrier. In addition to its 767s, LOT now operates a fleet of 25 EJets and five 737-400/500s.

LOT’s new management team is keen to replace the remaining 737s with EJets as the next phase of the fleet modernisation programme. Operating only two types of aircraft – EJets and 787s – would further reduce operating costs, particularly maintenance and training costs.

The carrier's management team believes its short-haul network does not require a full-size narrowbody aircraft because most of its routes are relatively thin. It prefers to focus on offering more frequencies, which will result in more connections and better timings for point-to-point business passengers.

LOT’s longest short/medium-haul routes are now Warsaw-Cairo and Warsaw-Tel Aviv, both of which are about a four hour flight. LOT already operates some of its Tel Aviv frequencies and all of its Cairo frequencies with E175s, according to Innovata data. As a result the carrier’s entire short/medium-haul network is now within range of its existing EJet fleet. LOT also plans to evaluate acquiring the new re-engined EJet family, which would offer improved range and open up potential new routes in the Middle East and Central Asia. 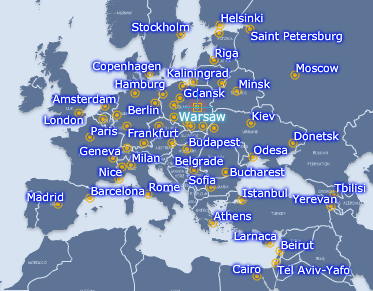