Slovenia’s Adria Airways this year plans to search for a strategic investor, hopeful it can attract interest from other airlines after completing a restructuring and recapitalisation in 2011. But the flag carrier, which has emerged as a significantly smaller and less ambitious entity, still faces significant challenges as it joins several Eastern European carriers in trying to sell stakes in adverse market conditions.

The Slovenian Government sold just under 30% of Adria Airways in Sep-2011 to a group of four banks as part of a debt for equity swap. The agreement also included a EUR50 million cash infusion from the Government, which has had to pump capital into the Ljubljana-based carrier multiple times over the last several years to cover continued losses. But the banks, which include two Slovenian and two international banks, are considered short-term investors and only agreed to the deal as it was seen as the only alternative to avoiding bankruptcy. The four banks are expected to sell their stakes at the first opportunity while the Government is also eager to further reduce its share, which now stands at just over 70%.

As part of the debt for equity swap, the four banks insisted on being provided with the first right to sell their stake in the event a new strategic investor is secured. The new investor could also end up with part or all of the Government’s remaining stake.

Mr Bostjancic, who took over as CEO in early 2011, is confident Adria will soon be in a sound enough financial position to attract investment from another airline. But he acknowledges the timing is not ideal as several Eastern European governments are now also seeking to sell stakes in their flag carriers to strategic investors. “There are many airlines in Europe having difficulties, especially smaller regional players. That’s why it’s so important that the business model we have today will work,” he says.

Turkish, Qatar or Etihad would be logical strategic partners for Adria

With Air France-KLM and Lufthansa not currently seeking to further grow their portfolios, and with Iberia-British Airways parent IAG more interested in other regions, airlines groups to the east are considered the most likely potential suitors for Adria and other Eastern European carriers. Turkish, Qatar and Etihad are particularly likely to look at any investment opportunity in Eastern Europe.

Turkish would be logical as both Adria and Turkish are members of the Star Alliance and Istanbul is Adria’s third biggest route while Turkish is currently the second largest foreign carrier at Ljubljana. But Turkish, which already owns a stake in Bosnia’s BH Airlines, recently expressed interest in participating in the planned privatisation of another Eastern European Star member, LOT Polish Airlines. There are more airlines in the region currently looking to sell than buy, making it imperative for carriers like Adria to differentiate themselves from their regional competitors if they are to succeed in securing a strategic investor.

Most of the carriers in the region have ambitions to build east-west hubs, primarily focussing on short-haul routes while relying on alliance partners for long-haul connections. Adria is no exception, operating only short-haul routes and relying on transit passengers for about 50% of its total traffic. 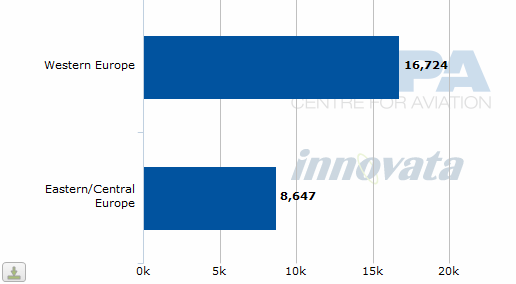 Five of the carrier’s six largest destinations are in Western Europe with Istanbul being the only exception. All six of its largest destinations are hubs for other Star Alliance carriers, showing the important role Adria’s membership in Star plays for providing connections to destinations beyond Europe. On five of these routes, Adria has codeshare arrangements with its Star partners (Austrian to Vienna, Brussels Airlines to Brussels, Lufthansa to Frankfurt and Munich, and Swiss to Zurich).

The carrier’s largest two routes by capacity are to Germany: Ljubljana-Frankfurt and Ljubljana-Munich. 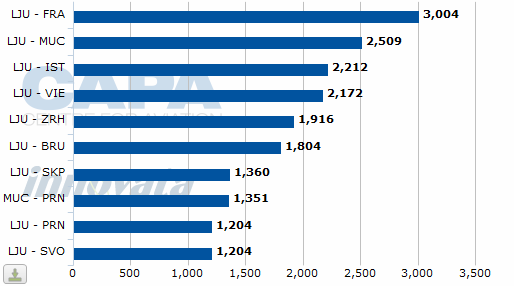 Adria does not serve any destination outside the European continent and under its new business model is focussing on a smaller number of destinations rather than expanding outside its current niche. Adria enjoys a powerful position at Ljubljana, where it currently accounts for 78% of total capacity, but needed to cut back to better match demand in the relatively small Slovenian market. 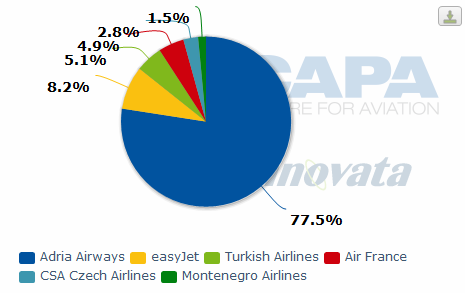 Mr Bostjancic says the network restructuring implemented last year was controversial but necessary for the carrier to shrink to a sustainable size and reduce costs. He says new union agreements with all employee groups except flight attendants were forged last year as part of the recapitalisation process. A new deal with the flight attendants is now being negotiated as the current contract expires in Jul-2012. “The closer we get to July 2012 there is more interest from cabin crew to sign an agreement so I don’t doubt that in 1H2012 we will sign an agreement,” Mr Bostjancic says.

He expects 2012 to be another “dramatic year” for the carrier. But most of the hard work has been completed. “The financials of the company have now stabilised. The business model has changed dramatically. In the past it was always been about growth, opening new routes,” he says.

Adria last year cut several cities from its network, leaving it with only 15 destinations in its current winter 2011/12 schedule. Year-round routes which were cut included Ljubljana to London Gatwick, Paris Charles de Gaulle, Warsaw and Banja Luka (Bosnia and Herzegovina). The carrier will resume seasonal service this summer to London, operating to Luton instead of Gatwick, but the other three routes remain suspended.

Adria’s summer 2012 schedule includes 170 weekly flights at Ljubljana to 18 destinations with Barcelona and Manchester also being added for the summer. In summer 2011, the carrier had 28 destinations and 226 weekly flights from its Ljubljana hub. In addition to the withdrawal of Banja Luka, Paris and Warsaw, dropped from Adria’s summer schedule this year are Athens, Dublin, Kiev, Ohrid, Split, Stockholm and Toulon. All seven of these destinations were previously only served on a seasonal basis once or twice per week.

Paris and London were by far the most controversial cuts given the prestige involved in serving the English and French capitals. “Closing the route to Paris and London was a huge media and political story,” Mr Bostjancic says. “We are hearing constantly from people, of course unofficially, that say because we received money from the government we should continue flying [those routes]. We have to explain to these people that we got money from government to stop flying unprofitable routes. There are a lot of people who really don’t get it.”

He adds that the London route is difficult to sustain year-round due partially to low-cost carrier competition while in Paris, which Adria had served with one daily flight, struggled to compete against much larger Air France. “In Paris we should make some kind of agreement with Air France,” Mr Bostjancic says, suggesting a tie-up with a carrier from a rival alliance is the only option for making the route viable. Adria already codeshares with one SkyTeam member, Aeroflot, and Mr Bostjancic says his carrier is interested in pursuing more partnerships with carriers outside Star where there is no conflict with other Star members.

London and Paris are the only two destinations at Ljubljana currently served by a low-cost carrier, easyJet. But easyJet also has decided to pull off its Paris-Ljubljana route from the beginning of Mar-2012, leaving Air France as the only operator. The French carrier currently serves Ljubljana with two daily 50-seat regional jet flights.

London and Paris were also two of only four routes that Adria had direct competition; the other two routes are Istanbul and Podgorica in Montenegro. On the Podgorica route, Adria codeshares with Montenegro Airlines with the two carriers combined operating five weekly flights. Adria does not yet codeshare with Turkish Airlines, which operates five weekly flights to Ljubljana.

While Ljubljana is currently only served by five foreign carriers, several additional foreign carriers including low-cost and leisure operators serve the market seasonally in the summer months. Slovenia is a high seasonal market with Adria’s passenger traffic in peak summer months typically nearly double the traffic compared to the lowest peak winter months. 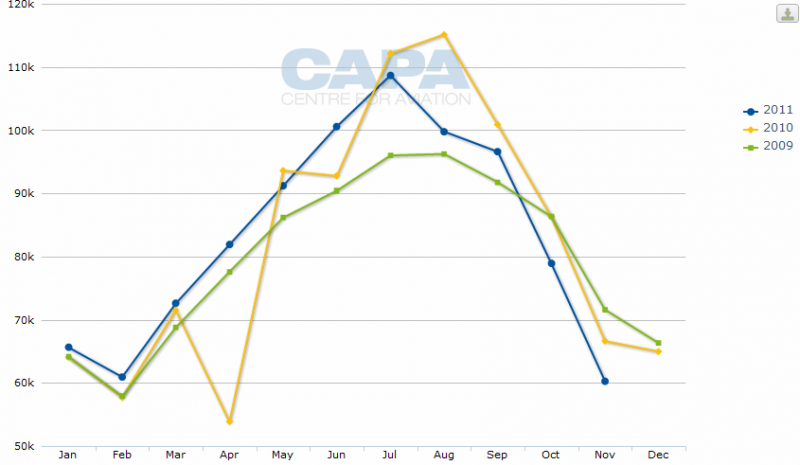 While not yet complete, Mr Bostjancic is confident the restructuring puts Adria Airways on a sustainable path. He says the fact the banks agreed to the debt for equity swap provided a huge vote of confidence in its new business model. “They recognised the turnaround programme of Adria Airways as sustainable – that’s why they did it. The banks are very conservative in this kind of thing,” he says.

Adria still has several more obstacles to clear before its restructuring can be deemed complete. While the network has been right-sized to better match demand, Adria still needs to further shrink its fleet. Until this is accomplished aircraft utilisation rates will be low, resulting in higher than necessary unit costs.

Adria currently operates 13 aircraft – two A319s, one A320, four CRJ900s and six CRJ200s. It returned a second A320 earlier this month but its new business model only requires a fleet of 11 aircraft. As a result Adria is currently looking for alternatives to reduce its Airbus fleet by another two aircraft.

Ideally the carrier would phase out its A320 family fleet entirely and operate an all-Bombardier fleet of 11 aircraft because it now struggles to fill its A319s/A320s on a year-round basis. Adria’s longest route, Moscow, is only three hours long and is already served with CRJ900s. An all-Bombardier fleet would allow Adria to increase frequencies in Airbus markets and reduce maintenance and training costs. The CRJ200s, which have higher unit costs than the larger and newer CRJ900s, could potentially be replaced with additional CRJ900s and/or Bombardier Q400 turboprops.

But disposing of the two A319s will be challenging. The A319s were delivered new from leasing company AerCap in 2010 and 2011. Adria is committed to 10-year leases on these aircraft while the lease on its remaining A320 does not expire until late 2014. Adria is now looking at potentially swapping its A319s for older A319s in order to reduce the length of its leases. But the ideal solution is to phase out the type entirely.

A strategic partner would likely be able to help Adria implement its desired fleet plan by taking on the A319s and potentially providing capital to replace the CRJ200s. If a new strategic investor cannot be secured, Adria may have to make do with a less than ideal fleet, preventing it from entirely completing its restructuring. Clearly 2012 will be another critical year for Adria as it tries to finally turn the corner and find a sustainable future in a challenging market for any small full-service carrier.