Airlines on Europe's southern and eastern periphery are becoming more precariously positioned, but are looking for for partners to help overcome the growing financial crisis. Cyprus Airways is the latest such carrier, and reported a widening in first half losses in the six months to 30-Jun-2011, as lower top-line revenue fell and higher fuel costs squeezed the airline in the period. Cyprus Airways is also turning to implementing a raft of measures aimed at stemming operating losses.

The following is a list of airlines assembled by CAPA in Eastern and Southern Europe, in various degrees of financial distress, that are known to be looking, or are likely to be looking, for increased co-operation agreements with regional rivals.

Cyprus Airways deeper in the red 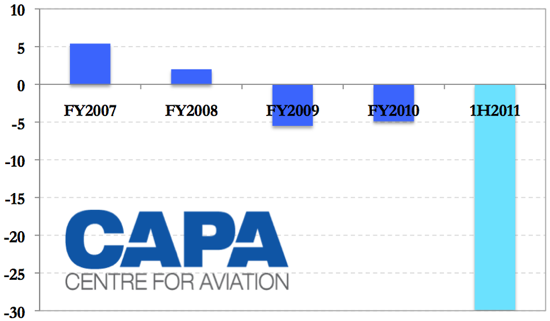 Commenting on the first-half result, Cyprus Airways stated “the adverse impact of the financial crisis” continues to affect demand in key markets, including the local domestic market. The airline also acknowledged that increasing competition has hurt pricing power. “Instability in the energy sector, the constant currency fluctuations, movements in interest rates, rising unemployment and employment uncertainty in Europe, as well as the political unrest in the Middle East region,” are also reflected in the weaker first-half result. Cyprus Airlines said these factors have the potential to “adversely affect the effort to secure the long-term viability“ of the airline.

Cyprus Airways has embarked on an ambitious cost-cutting strategy aimed at restoring profitability. To its credit, the airline has taken swift and decisive action to lower its cost base, sell assets, pay down debt, forge strategic partnerships and streamline the network to achieve this. In many cases, this decisive action, in addition to other factors, has resulted in reducing passengers and cargo volumes, leaving Cyprus Airways to shrink into profitability. Some of these changes, particularly the network reorganisation, have been implemented much to the dismay of the local tourism industry, which relies heavily on in-bound arrivals and considers the airline’s operation a public service. Despite protests from local industry, Cyprus Airways implemented its turnaround initiatives in 1H2011.

Revenue fell 8.0% to EUR90.6 million, reflecting lower passenger and cargo volumes in the period. “Other” income, representing approximately 10% of total revenue, gained exponentially in the first half. This was a result of the disposal of aircraft assets in the period (which were sold above book value), but most significantly non-recurring gains from an exchange of slots at London Heathrow with codeshare partner Virgin Atlantic. 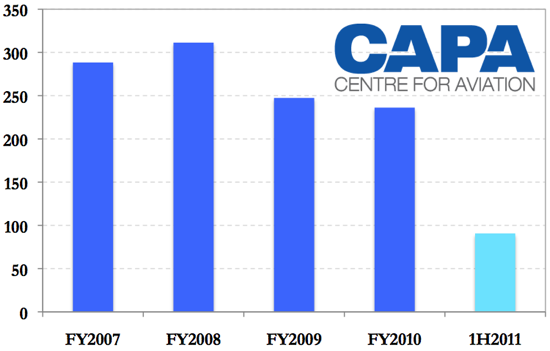 Passengers carried, which accounts for over 80% of revenue, fell 14.1% year-on-year in 1H2011, to 600,000. Revenue from cargo operations was also down, but the airline did not disclose exact figures for this segment. 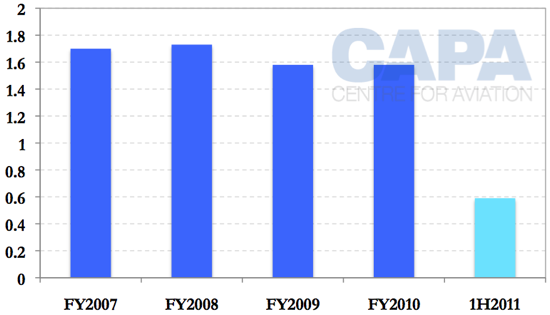 Cyprus Airways has taken a knife to capacity (ASKs) this year, as it tries to reinforce profitability through prudent capacity discipline. ASKs are down, on average, 15.1% in the first six months of the year. RPKs are down a less drastic 12.9% in the same period, pushing up average load factors. 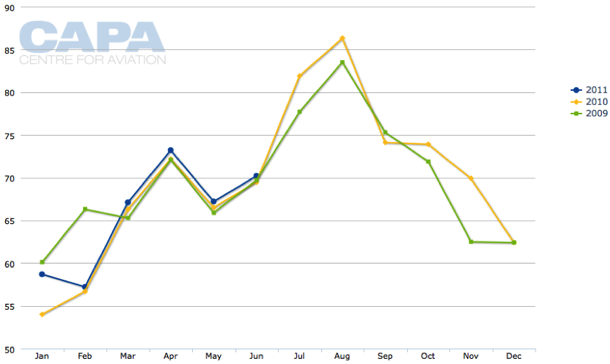 Despite the load factor gains this year, the airline’s average occupancy remains far below rivals airlines operating to the island country, particularly LCCs, which is placing Cyprus Airways at a competitive disadvantage. It reported an average load factor of 67.3% in 1H2011, up from 65.0% in 1H2010.

Costs fall, despite impact of fuel

The fall in operating expenses is due to the decreases in staff headcount and falls in en-route charges, landing and handling fees. Fuel and aircraft leasing expenses increased in the period. Exact figures were not provided for these cost items.

Moving to 'safeguard' future - A330s disposed of in favour of A321s

Cyprus Airways stated it is implementing various initiatives aimed at “safeguarding its future”. Most notably, longer-term cost reductions will occur as a result of the airline’s reduction in staff headcount, aimed at matching the productivity of rivals such as easyJet. Cyprus Airways will shortly commence negotiations for the renewal of collective agreements, with the airline stating it will seek to “remove existing distortions in its mode of operation,” further rationalising and saving in labour costs where possible.

Other cost saving (and revenue generating) initiatives include leasing aircraft that are freed up as a result of the airline’s decreased schedule and streamlined network. An A320 was sold at a profit in the first half and the carrier's two A330s have been sub-leased until the end of the year when it will return them to lessor ILFC in Dec-2011 and Jan-2012, a year earlier than the original lease expiry date. These measures will help bring down the airline’s leasing costs, which increased in the first half, freeing up capital to use elsewhere in the business. The airline has agreed to lease two cheaper, and more appropriate, A321-200s from ILFC for a six-year period from Apr-2012 and May-2012. The aircraft will join a fleet of 4 A319s and 7 A320s, according to CAPA's Ascend fleet database.

Increased cooperation with other airlines is a key element of the new strategy, resulting in Cyprus Airways launching a codeshare agreement with Virgin Atlantic and expanding cooperation with Olympic Air. The initial agreement sees Cyprus codesharing on Virgin-operated services from London Heathrow to Boston, Los Angeles, New York JFK and Newark. Virgin codeshares on Cyprus Airways’ services to Larnaca. In addition to the codeshare agreement, Cyprus Airways has benefitted from the Virgin agreement through the exchange of slots at Heathrow. The airline expects further benefits from Oct-2011 as the two airlines more closely coordinate schedules, beginning in Nov-2011 when the Heathrow slot swap is fully implemented.

With Olympic Air, Cyprus Airways has signed a wide-ranging cooperation agreement, aimed at strengthening the presence of the two airlines in south-eastern Europe. Cooperation covers the provision of ground services at airports in Greece and Cyprus, the joint use of VIP lounges and the exploration of joint infrastructure utilisation. Codeshare operations to/from Athens, Rhodes, Heraklion and Thessaloniki, to/from Larnaca and Paphos commenced in Mar-2011. The agreement was expanded in Apr-2011 to cover most domestic and international destinations of Olympic Air, as well as selected flights of Cyprus Airways.

Olympic chairman Yannis Karakadas stated in Apr-2011 that Olympic would not rule out the possibility of a merger with Cyprus Airways. "Will it be a merger? Will it be an acquisition? Nothing can be ruled out," Mr Karakadas said. Olympic has been hungry for a merger partner in southern Europe since its application to merge with Aegean Airlines in Jan-2011. The two already extensively cooperate, have widespread connections between the two countries and have largely complimentary strategies, both focusing on short-haul international markets in southern Europe.

As part of plans to address its financial position, Cyprus Airways has shrunk its balance sheet, with long-term debt and financial leases down in the first half. The difficult operating environment, however, has left the airline reeling with a working capital deficit of EUR27 million. The airline had a surplus of EUR7 million in 1H2010. This is likely to result in further pay down of debt through assets sales and possibly through cash, as the airline is once again generating cash from operations. The airline maintains it “has sufficient liquidity to meet current obligations as they fall due without being dependent on short-term banking facilities.”

Looking forward, Cyprus Airways expects a stronger second half, seasonally its strongest earnings period, but it remains unclear whether it will be sufficient to offset the heavy first-half result. The airline has made sweeping changes to its business, but sustained profitability appears several years off. Like several of its smaller European counterparts struggling amid the continent's ongoing economic malaise, Cyprus Airways needs to find lasting solutions.