Hungary’s Malev closes in on profitability

Hungarian Government-owned flag carrier Malev has seen a significant improvement in its financial situation over the last several months as it looks to a potential re-privatisation in 2012.

Restructuring work began at Malev in Feb-2010, when the Government renationalised the highly unprofitable carrier, and as reported in June was approaching conclusion, with aims be back in the black in 2012. Malev chief commercial officer Otto Gergye told CAPA last week that Malev’s financial performance has improved significantly over the last three months and “we’re definitely on the right track”.

Mr Gergye said Malev is “getting very close to” profitability, explaining that on an operating level Malev is now profitable again, although on a net basis it is still in the red due to its significant debt burden. Mr Gergye also says booking levels have been at historic highs in recent months, even though Malev’s capacity is at lower levels than 2010. More specifically, revenues in Sep-2011 were up 12% to 13% and passenger traffic was up 5%. He says Oct-2011 revenue and traffic figures are also looking “very, very good” with similar increases expected despite the lower capacity.

Malev spent most of 2010 overhauling its cost base. Since the beginning of this year, the carrier has been making further network adjustments, focussing more on routes with steady year-round business demand and less on seasonal leisure routes.

In markets outside Hungary, the carrier has been working this year to focus more on business passengers, including business class and full fare economy class. Mr Gergye says this effort has improved yields significantly in recent months at it “clears out” lower yielding distribution models and works more with travel agents that sell higher yielding tickets.

The campaign to change its portfolio of travel agents, which continue to account for a majority of tickets sold by Malev, has particularly had success in the UK. Mr Gergye says UK revenues in Aug-2011 were up 40% compared to Aug-2010 despite flat capacity. Budapest-London Gatwick is Malev’s seventh largest route by capacity with 21 flights per week.

Malev also has seen improvements in sales in several other countries. Only its Damascus service has been performing poorly in recent months, due to the political unrest in Syria. Malev has already reduced the Damascus flight to three flights per week and is now looking at further reducing the service to one weekly flight.

In the Hungarian market, Malev has not had to make the same kind of adjustments as it has a large share of the local market and a recognised brand. But in most foreign markets, Mr Gergye points out, Malev is typically a small player and one of two to three dozen carriers. This is particularly the case in Western Europe even though Malev has a relatively large presence in smaller Eastern European markets, including in several Balkan destinations.

Speaking at an IATA conference in Singapore last week, Mr Gergye stressed the need to distribute an airline’s product to someone who values and understands the product. Malev believes it has had success in recent months as it has spent time making sure the travel agents it uses in foreign markets understand its product.

Hopeful for a European equity partner

While not yet complete by any measure, the turnaround at Malev is intended to make the carrier more attractive to potential new investors. The Government has made no secret of the fact that it is open to re-privatising the carrier at the earliest opportunity. A strategic investment from another European carrier is the preferred route, although the economic situation in Europe would seem to make a sale in 2012 challenging. Also in Europe, SAS and TAP are cautiously hopeful of another European carrier buying them out. IAG has shown interest in TAP while SAS is still pursuing a suitor.

The Hungarian Government will be extremely careful this time in selecting a strategic partner after the failed previous privatisation, which involved selling a 100% stake to Russia’s AirBridge in 2007. Mr Gergye tells CAPA that the Government is “constantly” looking at opportunities to re-privatise. But Malev’s management team is focussed on continuing to improve the carrier’s financial situation as the privatisation process is being entirely controlled by the Hungarian Government.

Malev started a campaign earlier this year to add more codeshare partners as it looks to extend its offline network. The first new codeshare under this campaign was signed earlier this month with oneworld member elect Air Berlin. Mr Gergye says the codeshare with Air Berlin will begin at the end of Oct-2011 and cover Malev’s Budapest-Berlin route.

Malev is looking for additional codeshare partners, focussing primarily on other oneworld members which it does not yet closely work with despite being part of the alliance since 2007. Malev already codeshares with oneworld members American Airlines, British Airways, Finnair, Iberia, Japan Airlines, Royal Jordanian, and Qantas.

American Airlines, British Airways and Finnair and American are the only oneworld carriers currently serving Budapest. Convincing more oneworld carriers to enter the Budapest market – in addition to American, which launched service to the Hungarian capital from New York earlier this year – as well as codesharing with new carriers via online points such as Berlin, is key as the carrier looks to virtually rebuild its long-haul network. Malev dropped all long-haul flights in 2008 but is keen to work with as many carriers as possible to offer its frequent flyers, particularly its business clientele, a larger network of offline destinations.

More codeshare partners also supports Malev’s plans to develop Budapest into a transit hub for east-west connections. Malev is trying to differentiate Budapest from other European hubs by focussing on secondary destinations in Eastern Europe, particularly the Balkans region. About half of Malev’s 35 destinations are now in Central and Eastern Europe, although Central/Eastern Europe accounts for less than one-third of Malev’s total capacity. 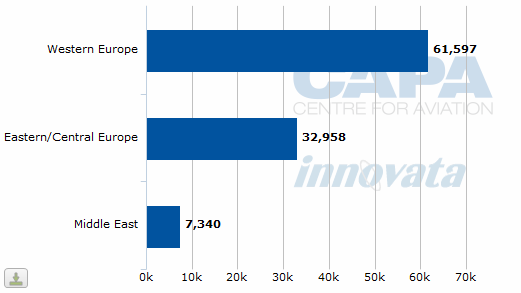 A hub for secondary points, but no expansion yet

Malev has been working during the last year on improving and maximjsing east-west connections by adjusting schedules. But despite the recent improvement in its financial situation, Malev has no plans to resume capacity expansion. Mr Gergye says the carrier will re-look at capacity next year but given the uncertain economic outlook in Europe for now it has no plans to resume expansion. “It’s early days,” he says.

Malev currently operates a fleet of 18 B737-800s and four Dash 8 turboprops. Several B737s leases are expiring over the next couple of years and Malev plans to renew these leases or lease replacement aircraft. But for now it has plans on expanding the size of its B737 or turboprop fleets.