A CAPA analysis report in Feb-2019 suggested that competition authorities on both sides of the pond may well increase their scrutiny of North Atlantic aviation and the joint ventures in 2019. Although overall JV share is slowly falling, it is still very high, and there has been little or no increase in competition on some routes since ATI was granted in 2010.

On the other hand, the entry of LCC Norwegian into the North Atlantic in 2013 sparked a low cost onslaught that has invigorated the market. WOW air, WestJet, Eurowings and Primera Air also entered the arena and made their mark (although WOW air is now shrinking and Primera Air has gone out of business). New entrants and new aircraft have helped to grow the number of airports in this market, particularly among airports previously regarded as too small to sustain nonstop trans Atlantic services.

The CAPA Americas Aviation Summit in Denver on 18-19 March 2019 will include discussion of the North Atlantic. This report adds to CAPA's analysis of North Atlantic JVs to give further context for this discussion by looking at changes in the number and nature of airports with direct routes on the North Atlantic in summer 2019 versus 2012, the year before Norwegian entered.

For more information on the CAPA Americas Aviation Summit in Denver on 18-19 March 2019, please click here.

The number of European airports in the market grew by nine, from 61 to 70 (16 new entries and seven exits), although this total has not changed since 2017. The number of North American markets with North Atlantic routes grew by 13, from 53 to 66 (14 new entries and one exit), over this same period.

North Atlantic (Europe-North America): number of airports in the market, last week of Jul, 2012 to 2019*

16 additions and seven exits in Europe…

London Stansted, Cologne/Bonn, Moscow Vnukovo, Palermo, London Luton, Batagay and Stavanger have all had North American services at some point after Jul-2012, but do not in Jul-2019.

Those no longer serving North American destinations that did so in Jul-2012 are Moscow Domodedovo, Pisa, Valencia, Riga, Hamburg, Petropavlovsk and Exeter.

…and 14 additions and one exit in North America

Memphis is the only North American airport no longer serving European destinations in Jul-2018, among those that did so in Jul-2012 (Delta ceased its Amsterdam service in Sep-2012).

Gander and Klemtu have both entered, and have then left, the Europe market since Jul-2012.

On the European side of the market, there is a clear group of four leading airports in the North Atlantic market.

Headed by London Heathrow and also including Paris CDG, Frankfurt and Amsterdam, these four European mega hubs will have 46% of seats from Europe to North America in the week of 22-Jul-2019, leaving the remaining 54% to 66 smaller airports.

North America does not have quite such a clear top four, but New York JFK is the stand-out number one, with nearly twice as many seats to Europe as number two Toronto Pearson in the week of 22-Jul-2019.

Nevertheless, the top four, which also include New York Newark and Chicago O'Hare, will have 39% of North Atlantic seats in Jul-2019. The 62 airports outside the top four will have a 61% seat share.

Airports outside the top four on both sides are growing faster

On both sides of the market, airports outside the top four have grown their share since 2012.

North Atlantic airports in Europe that are outside the top four by seats between the two continents have grown their share of North Atlantic seats from 45% in Jul-2012 to 54% in Jul-2019. On the North American side, the non top four airports' seat share has risen from 57% to 61% over the same period.

Those airports outside the top four on both sides of the market have been responsible for a much higher proportion of the growth.

Share of seats between Europe and North America for airports outside the top four North Atlantic airports in each continent: last week of Jul, 2012 to 2019* 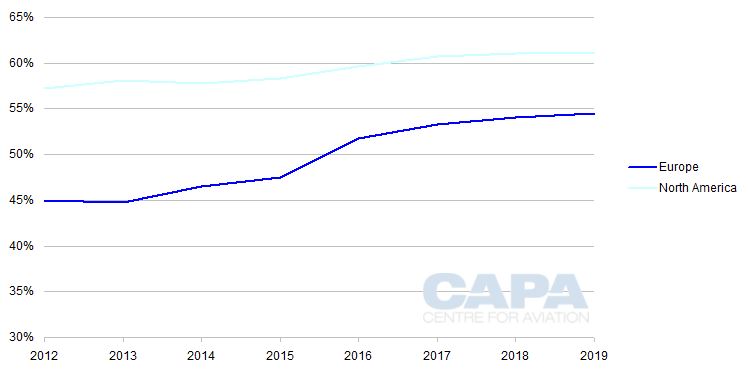 Europe will have 26 airports with only one North Atlantic route in the week of 22-Jul-2019. This compares with 18 in the equivalent week of 2012, although it has grown by only two since the final week of Jul-2015.

In North America, the number of airports with only one North Atlantic route will actually have fallen from 22 in Jul-2012 to 20 in Jul-2019.

However, this masks a sharper decline to just nine in Jul-2017, followed by a fairly steep rise since then.

Number of airports in Europe and North America with only one North Atlantic route: last week of Jul, 2012 to 2019*

Airports with only one North Atlantic route, week of 22-Jul-2019

Reykjavik Keflavik has added the most North Atlantic routes since 2012

The airport that has experienced the highest net number of North Atlantic routes added since Jul-2012 is Reykjavik Keflavik, with an increase by 15 to 24 in Jul-2019. However, this is a decline from the 28 reached in Jul-2018.

Reykjavik's growth was driven first by the expansion of Icelandair and then the entry in 2015 of the LCC WOW air on routes from Iceland to North America. Problems of overexpansion by both have led to the reduction this summer, particularly by WOW air, which is halving its North America capacity.

Dublin has added 13 routes to North America, mainly driven by Aer Lingus' long haul growth strategy, which began in 2012/2013 and was encouraged by IAG after the acquisition of Aer Lingus in 2015.

There has also been some growth to Dublin since 2012 by Air Canada, United and Delta, and the entry of Norwegian in 2017. WestJet is set to double its Dublin capacity this summer after terminating its service from St John's and adding new services from Halifax and Calgary.

There has been an increase of 10 in the number of North Atlantic routes at San Francisco since 2012, the biggest increase for a North American airport in that period. Growth from San Francisco to Europe has mainly been driven by United, with some increments also from British Airways, Air France, Virgin Atlantic, KLM and SWISS and the entry of SAS in 2013, Aer Lingus in 2014 and Turkish Airlines in 2015.

London Gatwick has increased its North America network by 10 routes since Jul-2012, mainly driven by Norwegian's entry in 2014, which also prompted some growth from British Airways. WestJet entered in 2016.

The above four airports are the only ones with a double digit increase in the number of North Atlantic routes between Jul-2012 and Jul-2019. The top 10 airports by number of routes added between Europe and North America is shown in the table below. It includes only Chicago from North America's top four North Atlantic airports and only London Heathrow and Frankfurt from Europe's top four.

In percentage terms, the highest seat capacity growth on North Atlantic routes between Jul-2012 and Jul-2019 is at Oakland, where the increase is nearly 19 times.

In addition to these 12 airports, 22 other airports have more than doubled their North Atlantic capacity over this period (see chart below). 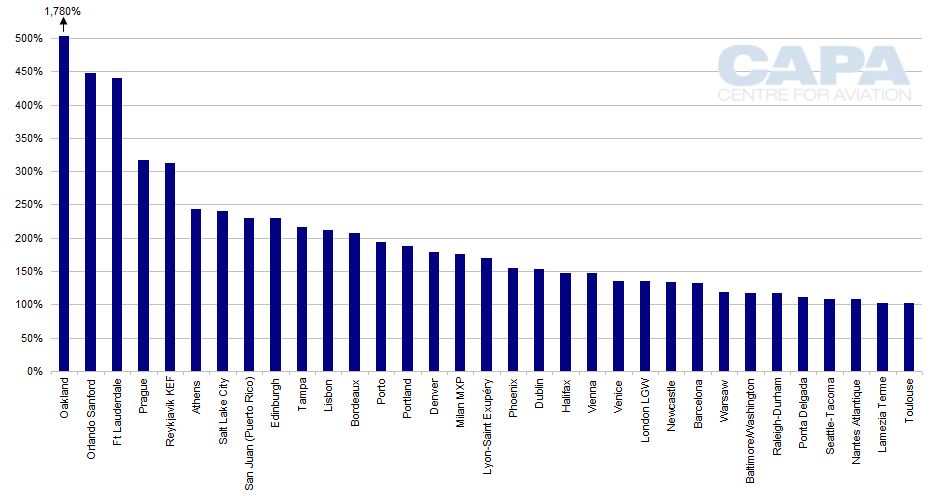 There can be no doubt that new aircraft technology and new business models have contributed to the expansion of the North Atlantic market in terms of the number of participating airports.

The well established large hubs continue to play a leading role, as do the airline joint ventures that controlled 72% of all seats between Europe and North America in 2018.

However, the market has widened to embrace smaller regional airports, including several with only one route. This has been enabled by newer generation, smaller aircraft allowing the operation of direct connections to smaller cities that could not economically sustain larger widebody flights.

LCCs have been significant agents of this change on the North Atlantic, led by Norwegian and WOW air.

Norwegian is slowing its group-wide growth in order to stem its losses (although its long haul growth will continue to outpace short/medium haul) and WOW air is shrinking its North America capacity this summer. In addition, a new entrant on the North Atlantic in 2018, Primera Air, has gone out of business.

Nevertheless, LCCs will continue to play an important part in this market. Moreover, legacy carriers are also making a major contribution to opening up new city pairs.

A CAPA analysis report of Sep-2018 found that new airport pairs have driven the majority of North Atlantic seat growth since 2012, but incumbent airlines (and airports) have added more seats than new entrants.

For more information on the CAPA Americas Aviation Summit in Denver on 18-19 March 2019, please click here.