Montenegro’s small aviation market has been witness to some interesting developments since the Jun-2013 entry of Ryanair. The Ireland-based carrier is now the sole LCC operating in Montenegro with a single route however it has expressed interest in opening up the market further. Other European LCCs will be watching Ryanair’s movements in the market.

Montenegro Airlines is the national carrier and sole scheduled operator. It currently provides around 41% of total seat capacity to/from Montenegro, according to CAPA and Innovata data. Fourteen foreign full-service carriers currently serve the country, accounting for around 58% of capacity while Ryanair, the only LCC in the market, currently contributes around 1% of seat capacity.

There are no domestic services in Montenegro as the country’s two commercial airports, Podgorica Airport and Tivat Airport, are only about 80km apart. There are other airports in Montenegro however these are primarily used for general aviation and military purposes.

Ryanair to bring the low-cost revolution to Montenegro

Ryanair announced its planned entry into Montenegro in Apr-2013 and launched its first service to the country, Brussels Charleroi-Podgorica, on 20-Jun-2013. Ryanair’s new route is significant as Montenegro is not currently served by any LCCs. The airline said it expects to carry over 10,000 passenger on the route per annum and has been promoting the route to both inbound travellers and Montenegrin residents.

Ryanair is now the 12th largest carrier in Montenegro based on weekly seats offered in the market (720 weekly seats equating to 1% of total system capacity). But it is likely to further expand its network at Podgorica and has stated it is also looking to launch services at Tivat in summer 2014. The airline’s first Montenegrin route is likely to remain a year-round service however any routes to Tivat are most likely to be seasonal due to Tivat’s traffic being mainly seasonal in nature.

Ryanair is the only carrier serving Montenegro from any Belgian airport, so for now Montenegro Airlines will not be facing any competition from the new LCC entrant. However depending on Ryanair’s plans for expanding in Montenegro, the flag carrier could potentially face competition on services to Frankfurt, London and Paris. All are key routes for Montenegro Airlines.

While Ryanair would be operating any new Montenegro routes from secondary European airports, it will still have the power to attract travellers away from the national carrier. Ryanair’s closest base to Podgorica is in Zagreb, Croatia from which it currently serves 16 destinations across Western Europe.

Ryanair will also likely not be alone for long in providing low cost connections to Montenegro, considering Hungary’s Wizz Air has also recently been steadily expanding its Eastern European network. Montenegro did previously see some LCC activity with airberlin. The German carrier continues to serve Montenegro but has been reclassified as a hybrid airline.

Western Europe’s share of the market has increased slightly with Ryanair’s entry into the market however it could potentially grow exponentially if Ryanair goes ahead with plans for further expansion.

Montenegro Airlines is based at the capital Podgorica and offers just under 22,000 seats for the week commencing 1-Jul-2013, according to CAPA and Innovata data. The airline’s network is divided between Eastern and Western Europe, with around 70% of its seat capacity allocated to Eastern European destinations and the remaining 30% to Western Europe. This network is currently operated using a fleet of eight aircraft, including three Embraer E195s and five Fokker F100s, according to the CAPA Fleet Database.

While the majority of the airline’s operations are from Podgorica, its top two routes (based on seats offered per week) are currently from Tivat Airport to Belgrade and Moscow Domodedovo. Tivat is mainly a seasonal leisure destination with significantly more capacity during the summer months. But Tivat-Belgrade is also one of Montenegro Airlines’ top two routes in winter, along with Podgorica-Belgrade. 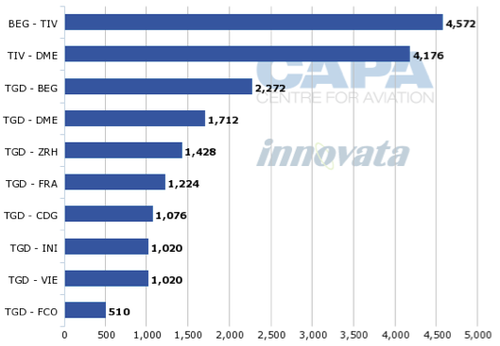 The flag carrier worked to restructure its operations in 2012 with the Montenegrin Government reportedly providing EUR36 million for restructuring purposes. The Government also reportedly ordered the country’s two international airports, Podgorica Airport and Tivat Airport, to write off the airline’s EUR9.7 million debt to the airports. In return the airports were expected to receive stakes in the carrier.

The airline’s debt was reported in Feb-2013 to be taken over by the Montenegrin Government as part of the Government’s plans to take over all debt held by the Government’s three state-owned companies. The Government was also reportedly planning to approve a state guarantee for a new EUR1.2 million loan from the First Bank of Montenegro to the airline to be used for investments in fixed assets. The anticipated repayment period is eight years with a grace period of two years.

Montenegro Airlines reported a 6% increase in passenger traffic in 2012 to 601,000, including 546,000 scheduled passengers and 55,000 charter passengers. Revenues were up 7% year-on-year while expenses decreased by 4%. The carrier did not report a profit figure but clearly operating losses were significantly reduced.

The airline’s CEO, Petar Glomazic, said at the time of releasing the limited results that the implementation of the restructuring had clear positive results in all areas of operations and expected it to continue in the future. Mr Glozmazic said the airline’s fleet is expected to stay the same in 2013 ahead of taking delivery of a new E190 on a long-term lease in spring 2014. Meanwhile plans for the airline’s privatisation had been postponed indefinitely.

No closer cooperation with other EX-YU airlines

In the midst of the airline’s restructuring in 2012, the Association of European Airlines suggested the national carriers in the former Yugoslavian countries of Bosnia and Herzegovina, Croatia, Montenegro, Serbia and Slovenia needed to unite into a single carrier in order to survive. There were some discussions between Montenegro Airlines, Bosnia and Herzegovina’s B&H Airlines, Croatia’s Croatia Airlines, Serbia’s Jat Airways and Slovenia’s Adria Airways over potential cooperation. But over the last year the airlines have just continued on with their own restructuring and privatisation programmes.

B&H Airlines and Croatia Airlines are continuing their restructuring processes. Adria Airways and Jat Airways are also continuing their restructuring processes while also looking ahead to privatisation. The Slovenian Government recently approved plans to privatise 15 state-owned enterprises including Adria Airways. Meanwhile Jat signed an agreement with Etihad Airways which may see Etihad invest in modernising the Serbian carrier’s fleet and integrate their networks to improve Jat Airways' efficiencies, revenue and cost reduction measures.

Montenegro Airlines is looking to further develop its network with negotiations taking place for the potential launch of services to Ukraine and the launch of an additional service to Russia. The new routes could be launched by the end of 2013 and will presumably be operated year-round.

The airline’s summer 2013 network saw the introduction of additional frequencies on services from Podgorica to Belgrade, Vienna, Zurich, Frankfurt, Paris, Rome and Ljubljana. The airline also resumed scheduled services to London Gatwick and Copenhagen and charter services to Bari, Naples, Saint Petersburg, France, Azerbaijan and Yerevan. Some of these services are seasonal.

Other non-Russian carriers including airberlin, Alitalia and Turkish Airlines have also expanded their Montenegro operations for summer 2013.

Ryanair’s entry and likely 2014 expansion will be sure to expand the country’s links to Western Europe. Meanwhile as Wizz Air continues its expansion in Eastern Europe, Montenegro could potentially be in its sights.

Montenegro Airlines’ challenge will be to successfully complete its restructuring in order to be in a position where it can compete effectively against LCCs. This could require considerable effort considering the state of national carriers from the countries of the former Yugoslavia.