Managing dual hubs is typically a challenge. Chinese carriers try to squeeze into each other's hubs, Japan Airlines has such a limited presence outside the capital some joke it should be called Tokyo Airlines while Lufthansa's preference for Frankfurt sees a reduced size at Munich and no long-haul services from other cities such as Berlin.

In Korea the opportunity has effectively been taken away, with the government restricting long-haul services from the second largest city in order to boost its flagship Seoul Incheon hub at a time Asian countries – Northeast Asia in particularly – are undertaking rapid long-haul growth.

Changes with the US and Netherlands could produce Busan's first long-haul service since Lufthansa ended a quasi-long-haul link to Busan (tagged with Seoul Incheon). But it is regional services that hold the most opportunity for Busan; 74% of international seat capacity is within Northeast Asia. The LCC sector especially holds growth, with Busan seeing over half of international seats flown by LCCs, largely due to local carrier Air Busan.

Busan's long-haul links have been limited. From 2007 to 2014 Lufthansa served Busan as a tag on Munich-Seoul services.

Lufthansa GM Korea Christopher Zimmer told Korea Times in Jun-2015: "Busan's market size was too small for a direct flight...But we'll try our best to come back one day."

But in terms of a non-stop long-haul service, Busan has yet to secure a route. Busan is 338km from Seoul Incheon. A frequenct and affordable high-speed train connects the two cities and their catchment areas. For a regional comparison, Osaka is 433km from Tokyo, which captures most of Japan's long-haul services.

It is not for want of trying. The Korean government has been working to concentrate long-haul aviation growth at Seoul Incheon. It sees that Asia's main hub airports are undertaking significant growth and that long-haul services at Busan fragments Korean aviation and reduces competitiveness. As it is, Seoul is worried that Incheon's transfer traffic is declining.

This reasoning has not been acceptable to Busan, whose mayor has been enlisted in the efforts from the airport and regional tourism authorities to land Busan a long-haul service. NNA Asia reported in Sep-2015 that Korea and the US agreed on a direct service between Busan and Los Angeles. It is unclear how this previously did not fit under Korea-US open skies.

Later in Sep-2015, Korea and the Netherlands agreed to a long-haul service into Busan, which would most likely be taken up by KLM. The Dutch flag carrier has experience with secondary cities in Northeast Asia, although it recently announced plans to withdraw from Fukuoka in Japan. Compared to Lufthansa, which ended Busan, KLM may be advantaged from its lower cost base and better proposition if a Busan service is non-stop instead of tagged with Seoul (or another point), which is costly and inconvenient to passengers.

No airline has announced thoughts or intention to operate long-haul flights into Busan. Outside of the Los Angeles and Netherlands opportunities recently made available, Gulf carriers would consider Busan.

Gulf carriers likely would already be serving Busan if their heavily restricted bilateral permitted them to do so. In Northeast Asia, Etihad and Qatar have secondary city experience in China while Emirates has used its bilateral allotment on flights to Beijing, Guangzhou and Shanghai.

LCCs are growing marketshare at Busan. Further gains depend on bilaterals

A long-haul service into Busan would be well appreciated by local interests. At best, it could generate additional services over the next few years (if Korea elects to liberalise). 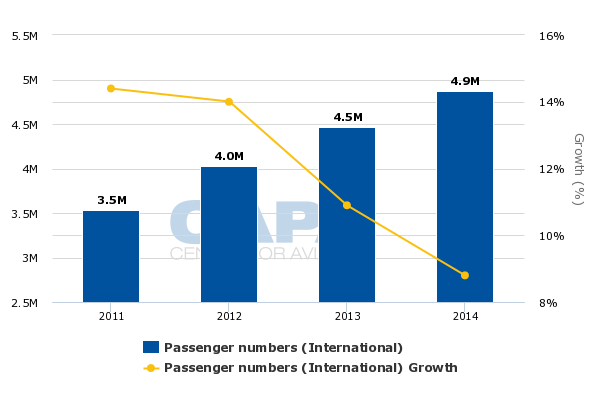 In particular it is low-cost airlines that are the segment to watch. LCCs have been growing their market share in Busan.

The first jump occurred in 2008 with Air Busan's launch and grew as Air Busan did. The LCC share of international seat capacity at Busan went from about 43% to 50% between 2014 and 2015. 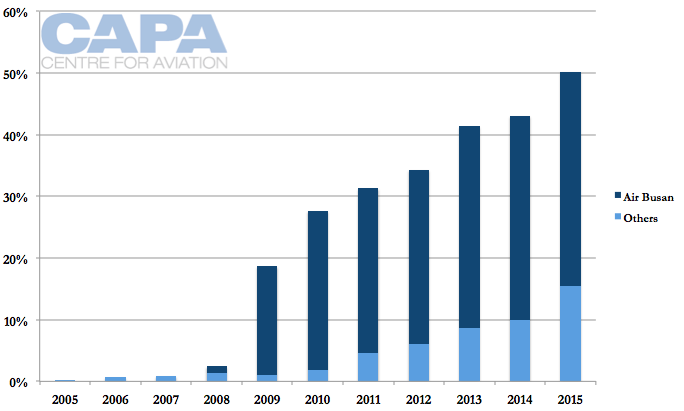 Northeast Asia accounts for 74% of Busan's international seat capacity with Southeast Asia holding most (23%) of the balance. There is also service to Pacific islands as well as far eastern Russia (which is catergorised on the graph below as Eastern/Central Europe) although the city – Vladivostok – is less than two hours from Busan, making it far closer to Northeast Asian capitals than to Moscow. 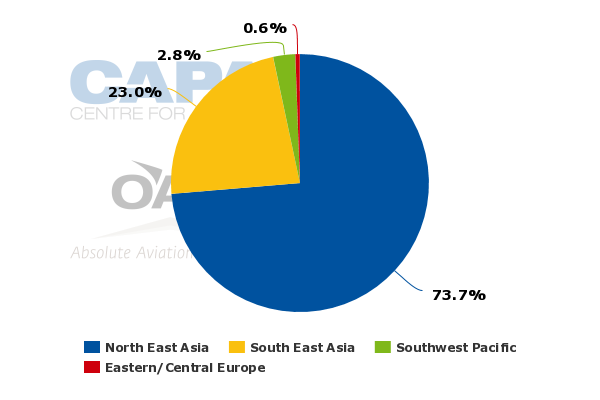 The Japan-Korea market is the largest not involving mainland China. LCCs account for 30% of the market, and this growing share has forced airlines to re-evaluate their strategies, one reason why Asiana wants to launch a Seoul-based LCC. Meanwhile Korea is a significant outbound tourism market from China with strong growth occurring including 12% in 1H2015. 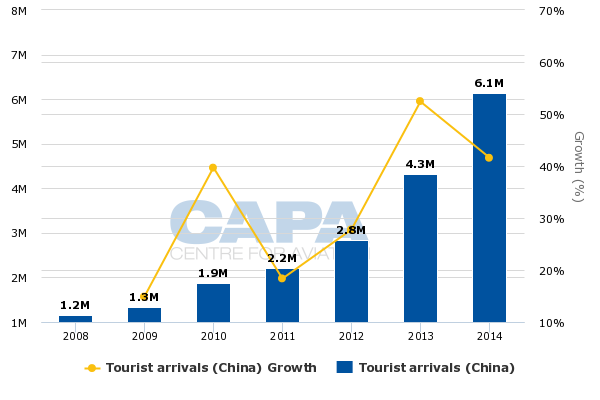 Korean carriers account for over 85% of seats in the Japan-Korea market. Korean Air holds a substantial share (35%) of the overall market. The market ex-Korea heavily favours Seoul, which accounts for 81% of seats. The Philippines has more seat capacity to Busan than Taiwan, a Northeast Asia market. The Taiwan-Korea bilateral is restricted on Seoul but open on other cities. China is restricted and additional bilateral allowances have been significantly less than what Korean carriers hopes for.

There are no scheduled services between Busan and Singapore because Korea has capped the Singapore bilateral, fearing Singapore Airlines and its Changi hub are too great a competitive challenge to Korea's aviation. An expanded bilateral would surely produce a scheduled Singapore-Busan service. This would likely come from Scoot, which operates a Singapore-Busan charter service underwritten by Korean agents with strong sales. 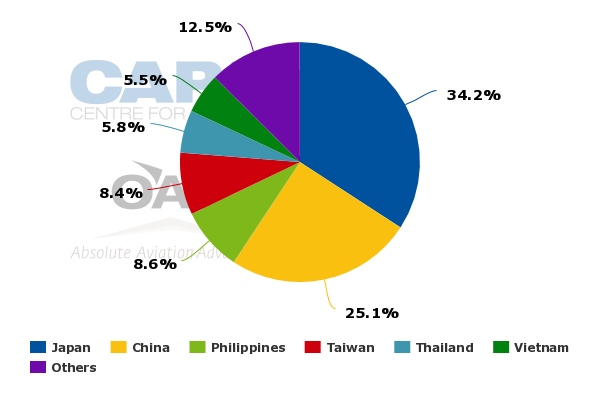 Busan is home to namesake Air Busan. Taiwan's V Air is the latest LCC in Busan

Busan's largest carrier for international seat capacity is Air Busan with a 26% share. Air Busan is a JV between Asiana, the local Busan government and Busan businesses.

The ownership has proven difficult for Asiana as Air Busan shareholders objected to it forming a LCC in Seoul. Korean Air is next largest with 22%.

In Busan Asiana takes a backseat so lower-cost Air Busan can concentrate on the market, which is less corporate than Seoul. Asiana is only the fourth largest carrier in Busan with about an 8% share of seat capacity. Jeju Air is third-largest with 10%. 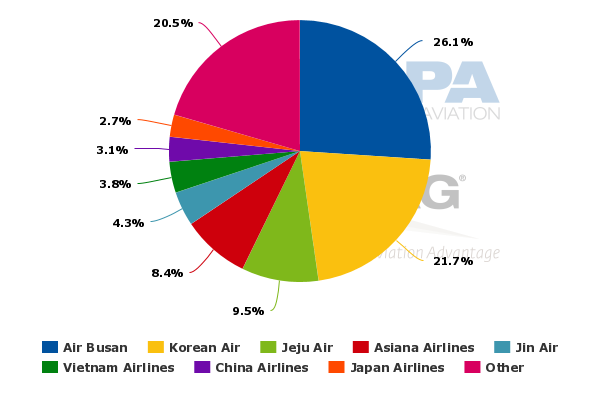 The newest growing market for Busan is Taiwan following the launch of two LCCs there in 2014. V Air made Busan its first destination in Northeast Asia when it launched twice-weekly Taipei-Busan services in Aug-2015. It hopes to grow to four or five times weekly in northern winter 2015/2016.

The other new LCC from Taiwan, Tigerair Taiwan, serves Japan (Okinawa, Osaka Kansai and Tokyo Narita) and has expressed interest in Tokyo Haneda as well as Busan and Jeju. Korean and Taiwanese carriers are restricted on services to/from Seoul.

2015 has seen Jin Air establish a base at Busan. Jin Air is the LCC affiliated (but no by direct ownership) with Korean Air. Jin Air has mostly focused on the markets from Seoul as well as Jeju.

Its entry to Busan in 2015 comes amongst two developments in the LCC sector. First is Jin Air's general growth. The fast growth of Jeju Air and plans for an IPO to further accelerate growth caused Jin Air to step up its growth.

Jeju Air's goals made it clear it wanted to be the leading LCC in Korea; Jin Air now wants that title. Jin Air in late 2014 took 777-200s to use on new long-haul service, making Jin Air Northeast Asia's first widebody LCC operator (although the 777s will not be used on long-haul flights until the end of 2015).

Second is Asiana's plan to enter the Seoul LCC market. Asiana had focused on Seoul with Air Busan but finally realised it was ceding ground to Jeju Air and Jin Air. Asiana announced plans to launch Air Seoul, but this has encountered regulatory delays due to a number of safety incidents at Asiana.

At the time of announcing international flights from Busan, Jin Air said the services were part of “large-scale” expansion. The expansion from Busan could also be viewed as Jin Air entering Asiana's LCC backyard of Busan in response to Asiana entering Korean Air's LCC backyard in Seoul.

Jin Air flew from Busan early its launch. Busan-Seoul services were offered in Feb-2009 and Mar-2009 and then suspended, according to OAG. This is unsurprising given the short distance between Busan and Seoul and the high frequency of low-priced high-speed train services.

Services from Busan to Jeju launched in Apr-2009 but ended in Dec-2009, according to OAG data. Jin Air resumed Busan-Jeju services in Feb-2015 with four daily services, which it still offers. Jin Air's four daily flights compare to 11 to 13 daily flights for Air Busan on the Busan-Jeju route.

OAG data indicates Jin Air offered services from Busan to China's Changsha in Apr-2015 and May-2015, but these are effectively charters to cater to the outbound Chinese market. Jin Air's scheduled international expansion from Busan occurred in Jul-2015 with four weekly services to Clark in the Philippines (services are seasonal). Double daily flights to Osaka Kansai and four times weekly flights to Cebu launched in Sep-2015. No further routes have been announced yet.

Air Busan serves Cebu and Osaka Kansai but not Clark. Kansai is Air Busan's second largest destination while Cebu is its sixth-largest. 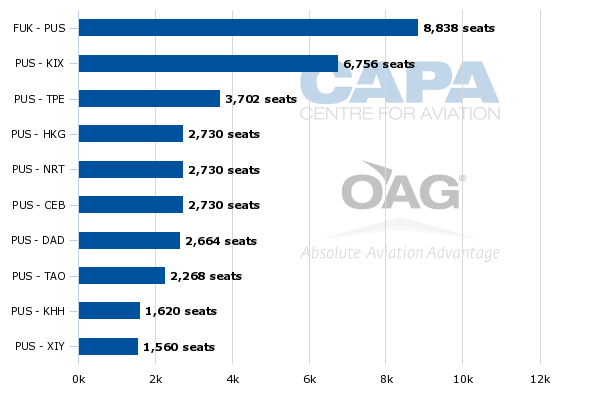 Jin Air serves both Cebu and Kansai from its main base at Seoul Incheon. Seoul-Kansai is Jin's second-largest international route and Seoul-Cebu is its fifth largest (and fourth largest from Incheon). This provides scale as Jin Air is already well-established in those stations.

Of the large routes Air Busan serves, Jin Air serves some (Fukuoka, Hong Kong) but not all (Taipei, Tokyo Narita). In some stations Jin Air would have difficulty securing slots. 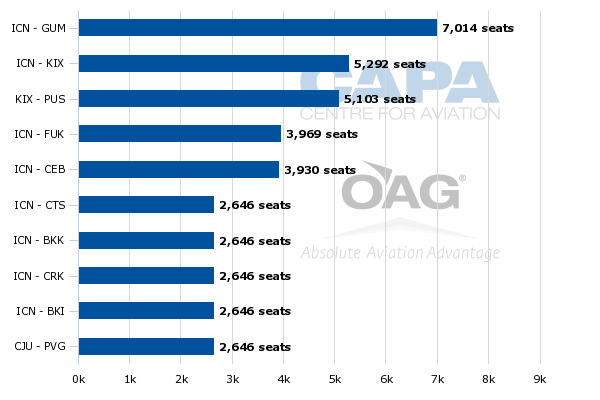 Guam and Osaka Kansai see more international service to all Jin Air points in Korea than Busan does across the network. But Busan could easily become larger than Guam and Kansai.

With only a sprinkling of services Busan is not much smaller than Guam and Kansai. Aeropolitics and slots permitting, Jin Air can grow much in Busan. It helps other carriers – local and foreign – have tended to focus on Seoul. 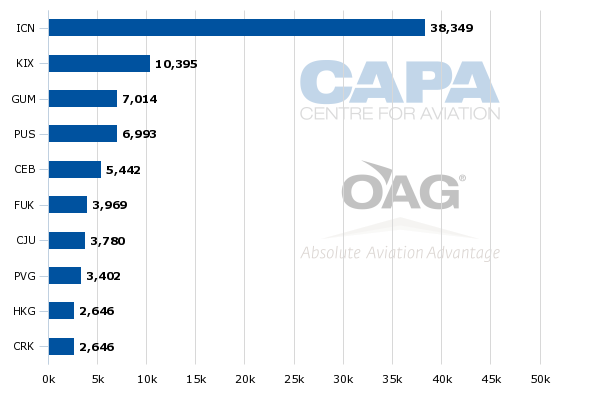 While Busan waits for a long-haul service, it is hoping AirAsia X's Kuala Lumpur-Busan service will bring attention. The airport is optimistic other airlines will follow AirAsia X, known to be agile.

The AirAsia X service was launched in Jul-2013 and has been served four times weekly since. Like other carriers, AirAsia X's Korea network was hit hard during the MERS crisis but the service continues.

AirAsia X's flight is now the longest from Busan at 4,567km. Busan's next longest route is to Bangkok (multiple carriers) at 3,695km.

Another medium-haul Asian service (such as Scoot converting its charter to scheduled, bilateral permitting) or intercontinental long-haul route will bring Busan awareness. But its biggest opportunity will remain regional services.

Busan has far more to gain with long-haul services than Seoul has to lose. Busan has many opportunities to continue to grow, and Korea should permit that. Restricting long-haul services does not help Busan's reputation in any market. Busan may not come near as being a challenger to Seoul, but its placement is worthwhile and should be supported.