Jitters in China are enough to make the world ask if there has been an earthquake. The depreciation of the yuan has a wide range of impacts, but as far as aviation is concerned, China's outbound market outlook remains bright. China's larger economic change, of which the yuan is one part, could impact business traffic to/from China. But the larger outbound leisure segment – there were 117 million Chinese tourists in 2014 – should continue its robust growth.

Against the US dollar, the yuan is about back to 2012 levels. An increase in trans-pacific capacity and looser visas restrictions will continue to drive growth. In other popular Chinese tourist destinations like Japan, Korea, Australia and Europe, the yuan is still at a two year, or longer, high. The outlook remains bright – and a great deal for China's tourists as they are better accommodated.

But countries face challenges of their own making: onerous visa processes, limited Chinese language and hospitality service and government/diplomatic kerfuffles. Even if the yuan depreciates further, as some speculate, countries that work to accommodate Chinese tourists will be rewarded with growing visitor figures. Already in 2015, Chinese visitors to Japan have doubled. This contrast to Korea's mishandling of the relatively light MERS situation, where Chinese visitor numbers have receded to 2008 levels.

The Chinese yuan depreciates 2% and stock markets are down. But Chinese airlines have already benefitted

The People's Bank of China on 11-Aug-2015 devalued the Chinese yuan by 2%, placing its value back around 2012 levels (when there was no dearth of Chinese tourists). The devaluation came as China tried to boost the economy – such as through stronger exports, which a devaluation would support – and move towards the likely long-term goal of making the yuan a global currency, which would require free floating. Although the Chinese government maintains the view there is no need for further depreciation, there is speculation the yuan could further depreciate in the short term by around 5%.

Depreciation against the US dollar may be offset by the China-US market largely being one characterised by VFR traffic, unlike Europe and Australia where tourism dominates. Being able to rely on local contacts may reduce exposure to a weaker yuan. 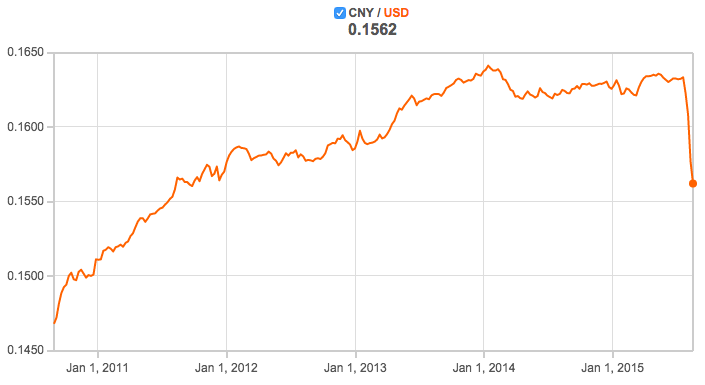 The depreciation has created further weakness in China's stock markets and pressure in global markets. But as far as Chinese airlines are concerned, they have already greatly benefitted.

New capital has been raised by major airlines and there were even new shares issued after Juneyao and Spring Airlines launched IPOs. Some labelled the airlines greedy, but they were naturally opportunistic – never have investors been so willing to give airlines capital.

The exception is China Southern, which did not issue new shares. Of the major carriers, Air China, China Eastern and Hainan Airlines raised capital. This includes China Eastern raising capital by selling a stake to Delta, which perhaps wishes it waited a few weeks for a better deal.

The yuan is still at near-record highs in other markets: Japan, Korea, Australia and the EU

The US dollar has varying impact in other markets Chinese visitors like to travel to. In the regional Asian market, the changes with the Korean won and Thai bhat make the markets attractive.

The Taiwanese and Hong Kong dollar (the latter linked to the US dollar) see limited change. The star, however, is the Japanese yen, whose depreciation means this year is the most affordable time in history for Chinese visitors to arrive at – and they are doing so at record levels. 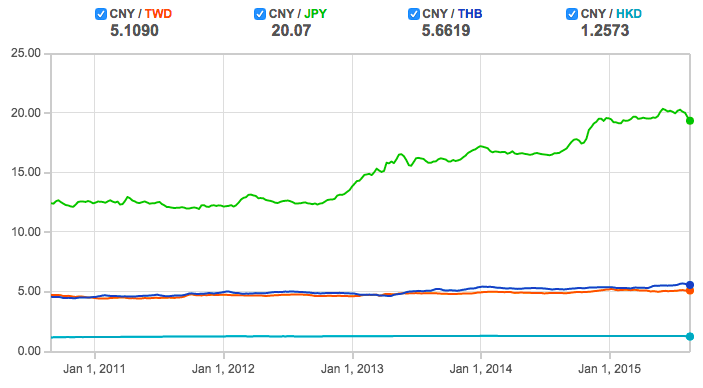 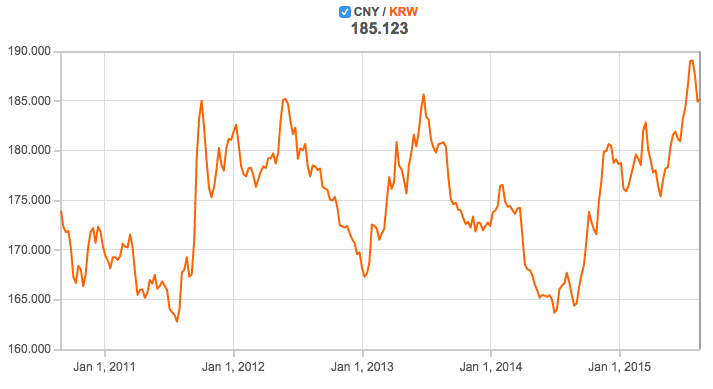 Long-haul markets also remain a bargain. They are not as frequently travelled compared to short-haul markets but the Euro and Australian dollar are still at near-record highs. 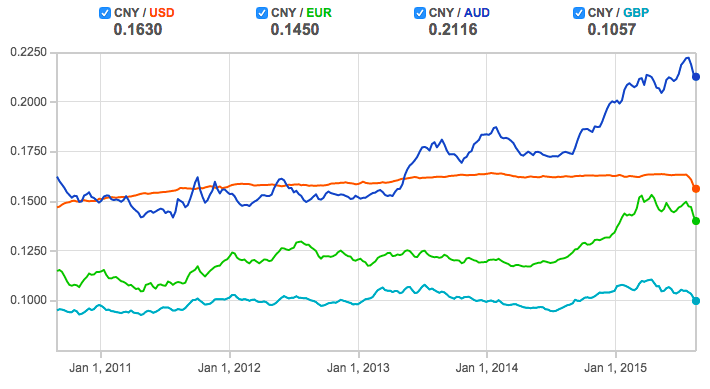 There were 116.59 million outbound Chinese tourists in 2014, the first year the figure surpassed the 100m mark. Outbound visitors have doubled since 2010's 57m visitors. 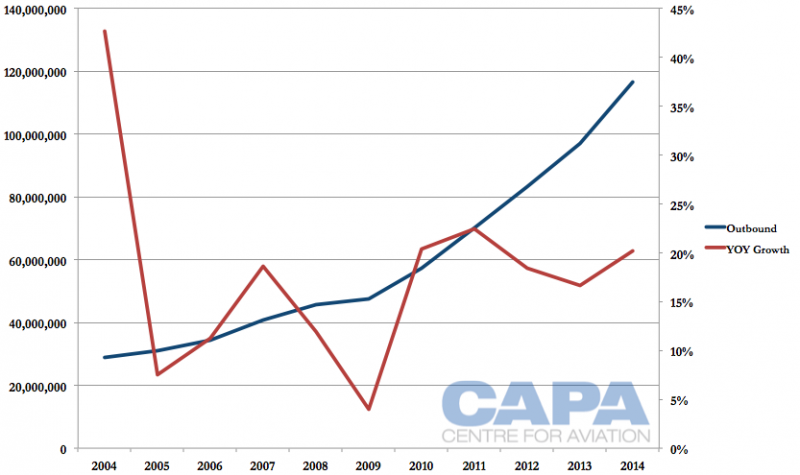 The addition equates to 20% growth. This is no small feat. The growth rate is lower than in past years in recent times. However, the net addition of visitors is at record highs. There were an additional 20m outbound visitors in 2014 compared to 2013. This is larger net growth than any other year despite the base increasingly becoming larger. The additional visitors mean equate to about five A380s departing China every hour in 2014 filled with tourists.

Overall in 2014, there was the equivalent of 30 A380 flights every hour bringing Chinese visitors outside. Some of those A380s would not have travelled far: Hong Kong is a key outbound market, often for day trips, which distorts statistics. Changes in travel policy are seeing fewer mainland Chinese visitors to Hong Kong. This decline will have an impact on full-year 2015 figures. 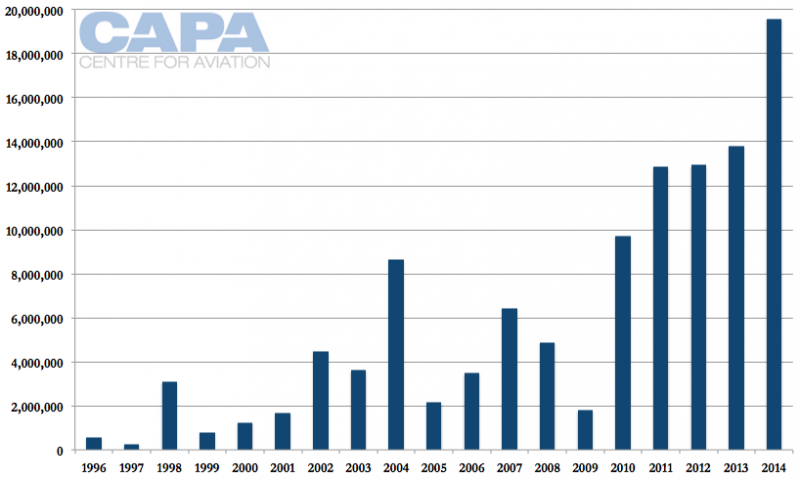 Chinese visitors retain spending power in popular markets, and the growing middle class means new travellers every year – in addition to other factors like growing visa and air service liberalisation. But even if there was to a small slowdown in some markets, growth rates are already high. 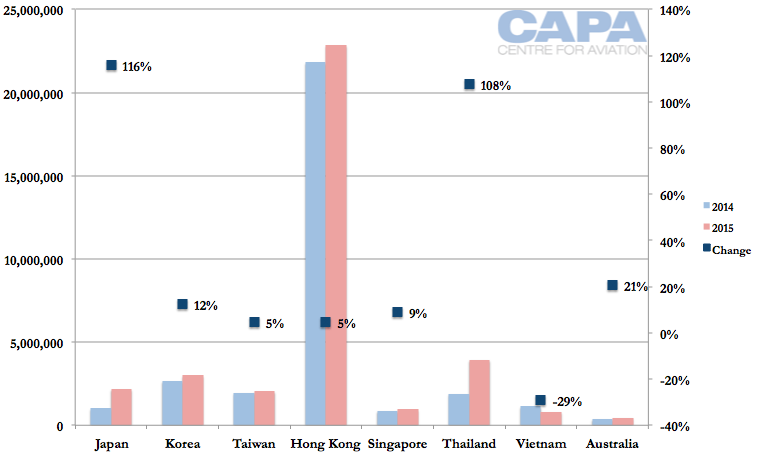 Source: CAPA - Centre for Aviation and tourism agencies
Note: Australia is for 5M2014/5M2015 only.

Growth earlier in the year in Hong Kong and Taiwan is turning to a contraction and will likely continue to for some time due to visa changes. Singapore is experiencing growth in 1H2015 compared to 1H2014, but traffic is still down from 2013 levels. Chinese visitors to Thailand were down in 2014 compared to 2013, but 2015's figures are still above 2013. Vietnam's decrease in visitor arrivals is another example of how quickly tourism markets can change due to political reasons. CAPA has previously examined imbalances in Chinese visitor flows to Asian markets.

There are few options countries can take up to directly combat the yuan's depreciation. Japan, as an extreme, devalued its yen as part of a broader economic plan. To address any perceived weakness in inbound visitor flows, countries will need to look inwards. They cannot change currency but they can change their strategies.

New 10-year visas between China and the US are markedly accelerating growth, after the US looked to improve Chinese visa processing. The island of Jeju in Korea is visa-free, unlike the rest of the country. Air service expansion provides room for more direct service and inbound visitors. Japan and China have cleared the air to finally allow more services between their countries, but the US and China disagree about a bilateral expansion. Australia and China earlier in 2015 agreed to further airline growth.

There are softer touches. In a short time, Japan has switched to an inbound tourism mindset. This can involve seemingly minor matters. Tax free shopping has been made easier with in-store refunds, eliminating the need to play the airport lottery where a refund desk may reject paperwork that was not properly completed by a store. This eliminates long lines at the airports, which may not have generous hours for their refund points.

Japan is working to make wifi and international ATMs more available for visitors. WiFi is especially common among Chinese, where having two smartphones for personal use is not unusual. Instant posting and boasting of travels gives countries free marketing, and is likely higher value since the commentary comes from direct contacts.

Yet there is much room for improvement. Korea failed not only to handle its small MERS crisis effectively but also did not calm over-blown public fear. Thailand's response to an Aug-2015 bombing has underwhelmed some markets, with Hong Kong and mainland China seeing drop-offs in visitors. China Southern in Aug-2015 told the Sydney Morning Herald that Australia needs more hotel rooms (and at more competitive rates) and options for eating during public holidays. Australia's airports are already well tuned in to the Chinese tourism boom, with signs in simplified Chinese and guides who speak Mandarin. Airports are also placing Mandarin speakers at duty free shops.

Osaka Kansai's cooperation with Spring Airlines – largely built on the financial opportunity of having more Chinese passengers at duty free – is seeing an influx of Spring flights to Kansai, amongst other Japanese and foreign points.

Natural disasters – acts of god in insurance parlance – will always be an uncontrollable threat. A controllable threat is diplomatic disputes, as seen with the previous drop-off of Chinese visitors to Japan, the current decrease to Vietnam and the indirect impact to Malaysia.

There is a growing divide as the issues are heightened by government officials far older than the younger generations that increasingly make up China's outbound travel. They may have a faint (or no) recollection of historical matters often at the centre of these disputes - although they are still vulnerable to nationalistic campaigns often made for political reasons.

The China outbound market is different from others. It requires hard work and investment.

But as countries are proving, the reward is also great. The volumes are large, increasingly sophisicated, FIT and high-spenders. Chinese visitors to New Zealand spend over twice as much per day as Americans. With such existing figures and a growing number of outbound travellers, there is cushion for depreciation.

But right now many markets remain exceptional deals and other markets have gone back to exchange rates from earlier this decade. The short term outlook for Chinese outbound visitors remains strong and the long term is bright.