This is a difficult period for Korean Air. Its now infamous 05-Dec-2014 return to the gate in New York JFK over how VP Heather Cho was served macadamia nuts occupied the headlines in Korea and the story remains ongoing. The incident symbolised growing concern over the power of Korea's chaebols. There are significant repercussions. Ms Cho was given a one year jail sentence and a Korean Air unit is likely to lose contract work.

But any impact to the airline's core business is so far unclear. Many have cited Korean Air's drop in domestic traffic in Dec-2014 as a possible public backlash, but Korean Air's domestic traffic had been declining all year – and, in fact, for nearly a decade as liberalisation saw Korean Air lose its previously powerful grip. In 2005, prior to the entrance of Jeju Air that started Korea's LCC wave, Korean Air carried 11.4m domestic passengers and had a 66% market share. Korean Air has been able to use its LCC affiliate Jin Air to limit the decline. In 2014 the two carried 9m passengers, for a 36% share. Korean Air alone carried 6.8m for a 27% share. Meanwhile Jin Air will deploy its 777 in the domestic Korean market, likely a measure as it waits for international opportunities. 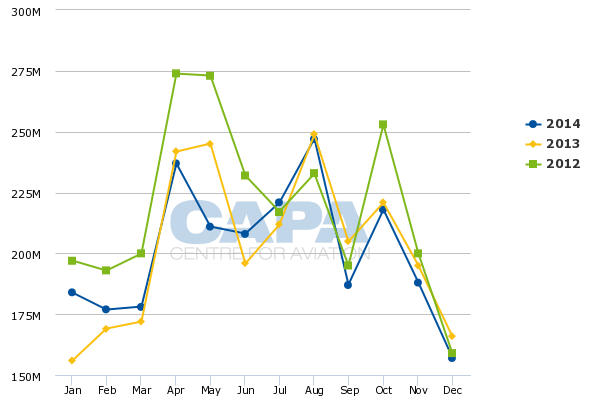 It is also accurate Korean Air's load factor in Dec-2014 reached an annual low of 58%. 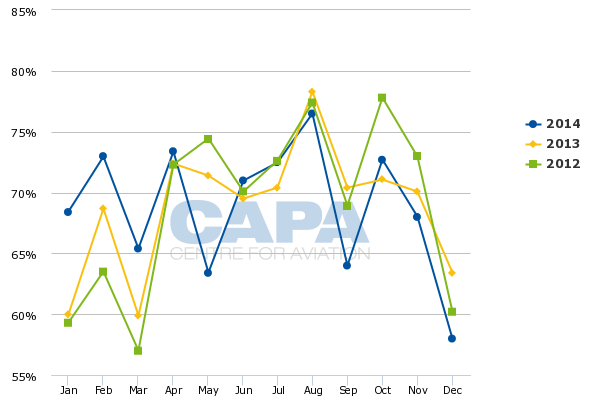 The 05-Dec-2014 incident captured global headlines but often not in a serious manner. Yet there the seriousness and upset this incident caused within Korea should not be underestimated. But it is too early to infer that the limited data shows a decline as a result of this incident. This is especially the case since Korean Air has historically been declining in the domestic market. 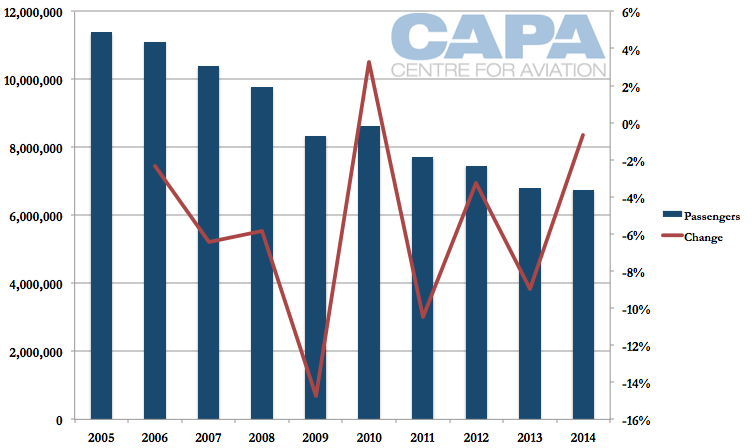 Korean Air carried 11.4m passengers in 2005 when it and Asiana effectively had a duopoly in the domestic market. Jeju Air entered in 2006 and later transitioned to a LCC. Jeju Air's growth, and that of subsequent LCC entrants, have grown at the expense of Korean Air, which carried 6.8m domestic passengers in 2014.

But the story of the larger domestic market is more encouraging as competition has brought growth. The 17.1m domestic passengers in 2005 grew to 24.7m in 2014, according to Korea Airports Corporation.

The larger story for the Korean Air group is not as negative as Korean Air's domestic decline from 11.4m passengers in 2005 to 6.8m in 2014 would suggest. Korea Air in 2008 launched LCC unit Jin Air. (Today Jin Air is still technically Korean Air's LCC although the LCC has moved from being a Korean Air subsidiary to belonging under the parent company.)

While Korean Air has shrunk, Jin Air has grown. In 2014, Korean Air and Jin Air combined carried 9m passengers, with Jin Air accounting for 25% of the group's domestic total. This 9m is less than the 11.4m Korean Air carried in 2005 but, without Jin Air, Korean Air would likely have a lower group market share. 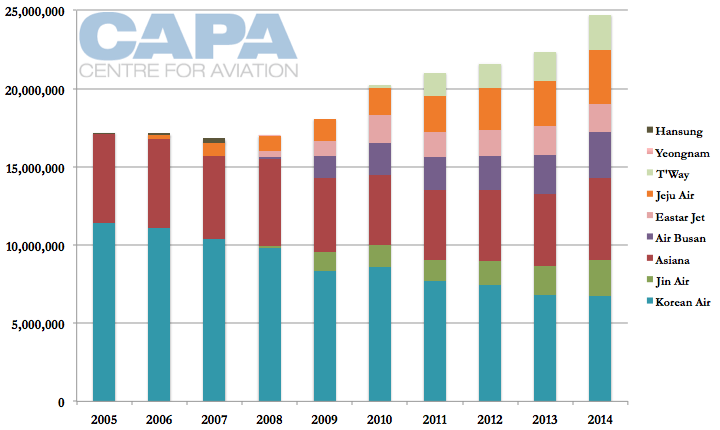 Smaller Asiana has been able to use LCC Air Busan to maintain market share without any broad loss. Asiana's smaller size likely meant it had less to lose whereas Korean Air's significant size – holding two-thirds of the market – meant some decline was inevitable.

Asiana had a 34% market share in 2005 and 21% in 2014, but the addition of Air Busan brought the group to 33%. This has effectively allowed the group to maintain overall domestic market share, but it should be noted Asiana is only a part owner in Air Busan (Korean Air and now the Hanjin Group own 100% of Jin Air) and Air Busan does not operate between Seoul and Jeju, meaning Asiana may have lost market share on that city-pair. 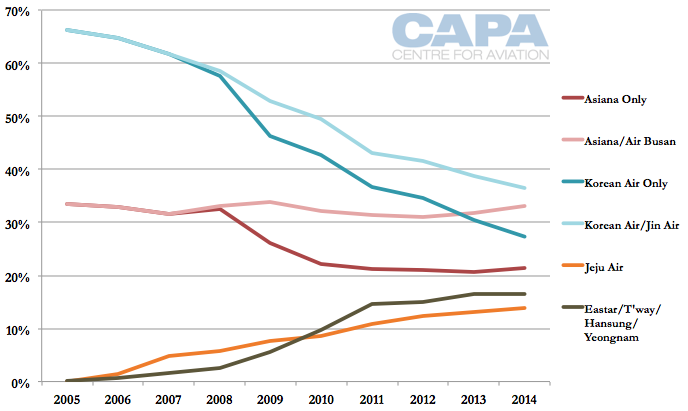 The domestic market is small for Korean Air and Asiana. Yields have declined

Ultimately, the domestic market is a small part of Korean Air and Asiana. Domestic flights (at the mainline carriers only, so excluding Jin Air and Air Busan) accounted for 4% of revenue at Korean Air and 9% at Air Busan at the end of 2014.

This compares to 16% for Air Busan and 8% for Korean Air in 2005. Over the past decade, domestic revenue share reached a peak of 18.5% for Asiana in 2Q2005 and 9.2% for Korean Air in 4Q2009.The lower figure for Korean Air reflects its larger international network but also ground-based units like catering, limousines, and aerospace manufacturing. 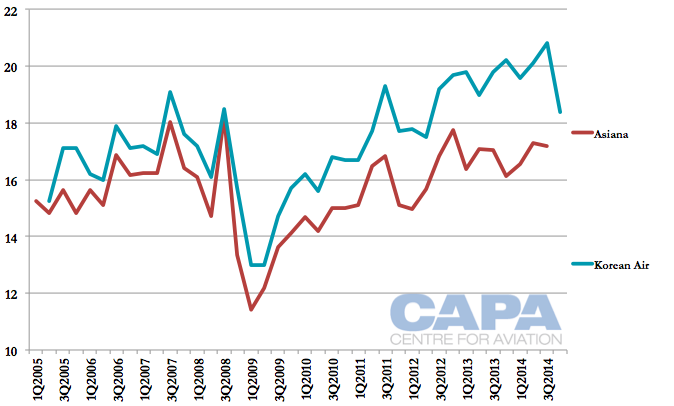 It is likely Korean Air has seen larger yield gains since it has decreased capacity faster than Asiana. 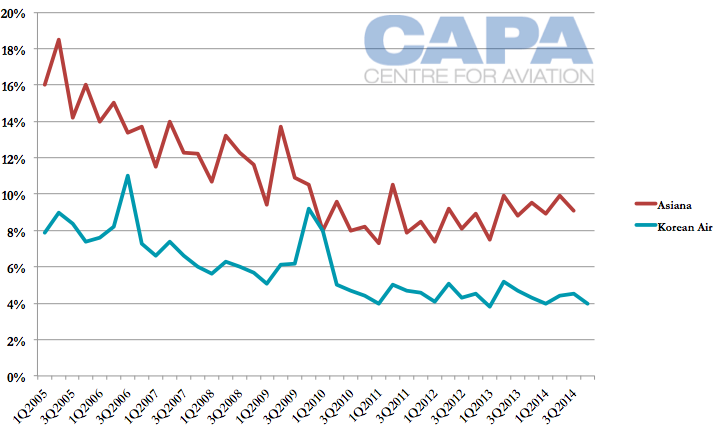 Further growth in the domestic market is occurring as Jin Air deploys its 777-200 on some Seoul Gimpo-Jeju flights. Jin Air commenced 777 service in Dec-2014 on the Seoul Incheon-Guam route and intended for the 777 to operate some Guam services through Mar-2015 but has ended the service about a month early.

The previous service end date coincided with the end of the northern winter scheduling season but it is possible Jin Air saw reduced demand as the peak period ended. 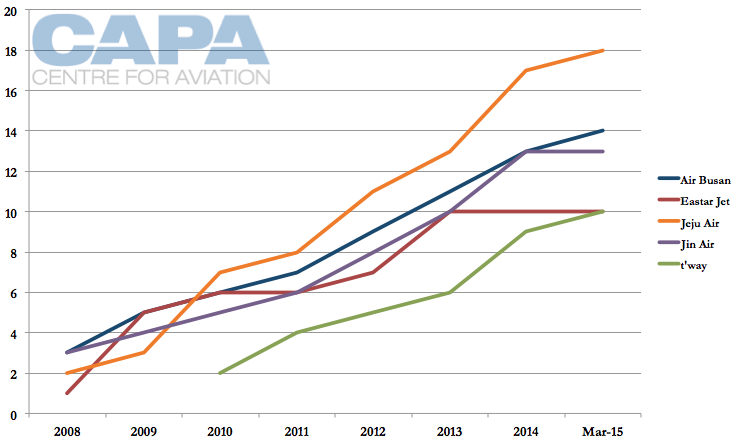 Jin Air instead has moved the 777 to the Gimpo-Jeju route, its only domestic service. Jin Air still operates one 777 but in late 2014 intended to add two more in 2015. Jin Air's schedule shows the 777 operating four return services a day between Gimpo and Jeju. The 65 minute block time per segment equates to about nine hours of block time. This is about the same utilisation as when Jin Air had the 777 on a daily Seoul-Guam return, although the 777 operated 9-12 Guam return services a week.

Flying time on the 777 is lower due to shorter distances on domestic flying. There can be further costs due to high aircraft accumulation, but the aircraft is not the newest, having been built in Aug-2006, according to CAPA's Fleet Database. The 777 (from Korean Air) is nine years old, making it the youngest aircraft in Jin Air's fleet since its 737s were all manufactured between 1999 and 2001. The 777 has slightly brought down Jin Air's average fleet age. 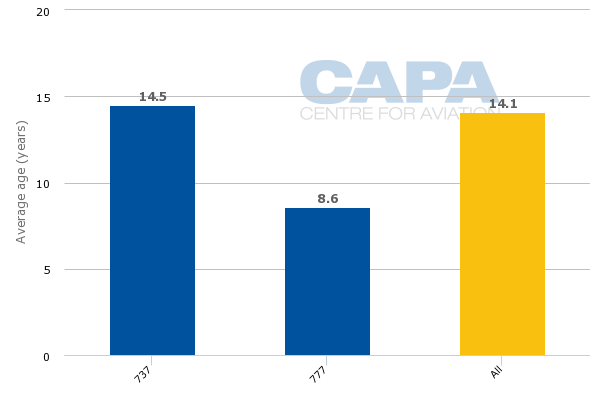 Scheduling data from OAG shows Jin Air is not reducing services as it replaces four daily 737 services with 777 service. This change equates to around 30% capacity growth on the Seoul Gimpo-Jeju route for Jin Air. This is unlikely to sustainable.

Asiana and Korean Air mostly (but not exclusively) use narrowbody aircraft on the route. Rather, Jin Air is likely using the aircraft while it prepares for international and long-haul service. Jin Air had been planning for a Hawaii service but also mooted unspecified points in Europe and Australia, perhaps serving destinations Korean Air does not.

Given Korean Air's previous prowess, some decline was perhaps inevitable. Then again, a delayed and initially weak LCC strategy have perhaps impacted Korean Air in the long-term. Having maybe lost the domestic market opportunity, Korean Air wants to see Jin Air get ahead in the international market. This will be far larger than the international market even if Korea's LCCs for now mostly fly domestically. With Korea one of, or even the, fastest-growing international tourism markets with China on its doorstep, there is much growth ahead.

There are short-term challenges, including some possibly resulting from the 05-Dec-2014 turnback incident, but history generally shows consumers to have a short memory to disruptions and even safety incidents. There are larger headwinds to be concerned about. China access is restricted and Jin Air is having a slow its 777 expansion. The 777 launch – the first widebody for a North Asian LCC – had the misfortune to occur just after the 05-Dec-2014 incident that stole headlines. It might also be questioned if 777 international growth is the best in the short-term given untapped potential for 737 international growth. This is especially a concern given a perhaps weak product proposition on the 777 that may not deliver suitably low unit costs.

Jeju Air in Mar-2015 confirmed it does not have plans in the foreseeable future to commence long-haul flying and will instead retain its international focus of regional 737 growth.