In six years, low-cost carriers have carved out 30% of the Japan-Korea market, the world's 14th largest country-pair and fifth-largest in Asia. The overall market is growing, but with full-service carriers reducing capacity. 2015 is the third consecutive year of full-service capacity declines. Korea's independent LCC, Jeju Air, has captured 9% of the overall market. Korean carriers account for 85% of capacity, the result of their lower cost base compared to Japanese carriers and their ability to serve more Japanese points from one or two Korean hubs.

There are dual-brand strategies in the market that have seen full-service airlines hand routes to their LCC, fly alongside their LCCs, or have the LCC launch entirely new services. Overall, however, the strategies are hardly thoroughly integrated. Asiana intends to make Japan a large focus of its proposed LCC Air Seoul, which would finally give it a LCC presence in Korea's largest market (Asiana's existing LCC Air Busan is in Busan and does not fly internationally from Seoul). But a series of safety incidents have delayed Air Seoul, creating an opportunity for competitors to step up their competitive growth – if they can seize the moment. 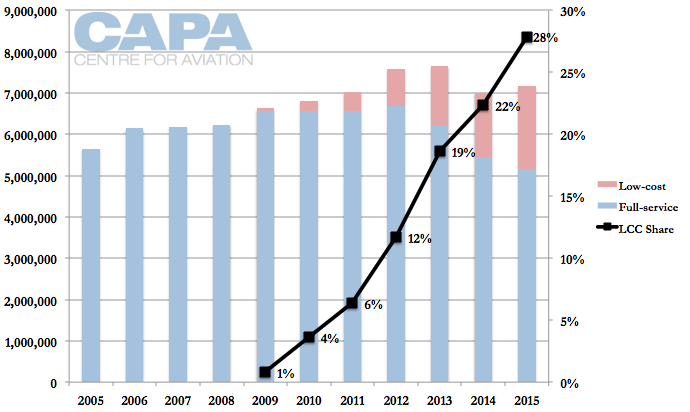 Korean Air accounts for 35% of the market, more than all LCCs combined

In 2015, Korean carriers account for 85% of available seats, and Japanese carriers 14% with the remaining 1% held by a single fifth freedom operator, United Airlines. On both the Korean and Japanese side, full-service carriers account for 70-75% of seat capacity with 25-30% held by LCCs. Two Korean LCCs – Air Busan and Jeju Air – are larger than All Nippon Airways while all Korean LCCs have more seat capacity than all types of Japanese airlines. 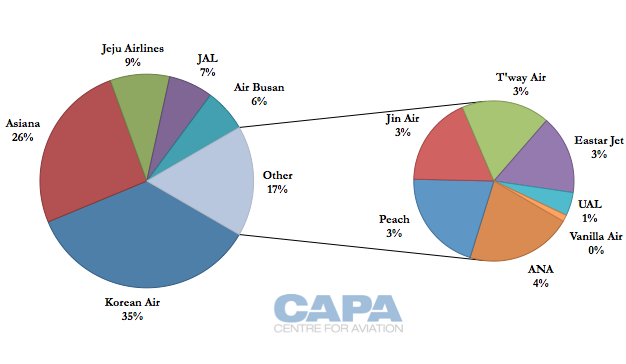 Helping the Korean side are some critical market characteristics. Korean carriers typically have a lower cost structure although Japan's new LCCs are more aggressive in a "pure" LCC model than Korea's LCCs. Japan is a more fragmented market: 99% of Japan-Korea capacity arrives in one of two cites – Busan or Seoul – but six Japanese cities account for 93% of seats. This gives an advantage to Korean carriers that can base an aircraft in either Busan or Seoul and serve multiple Japanese cities, but Japanese carriers would need multiple local bases to serve Busan or Seoul.

For airlines, and LCCs especially, that do not want to complicate their business with multiple bases, Korea offers more condensed opportunities: 81% of Japanese capacity departs from Seoul, and this is where most of Korea's LCCs are based. In Japan, the largest departure city, Tokyo, accounts for only 37% of Korea capacity. 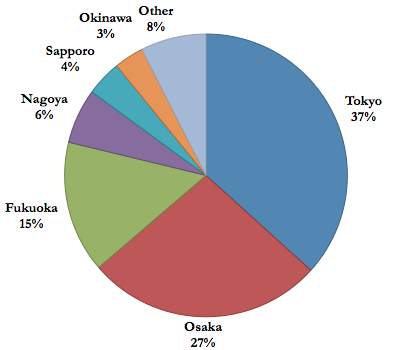 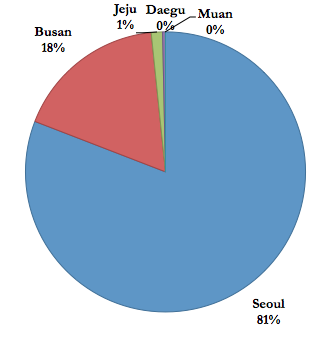 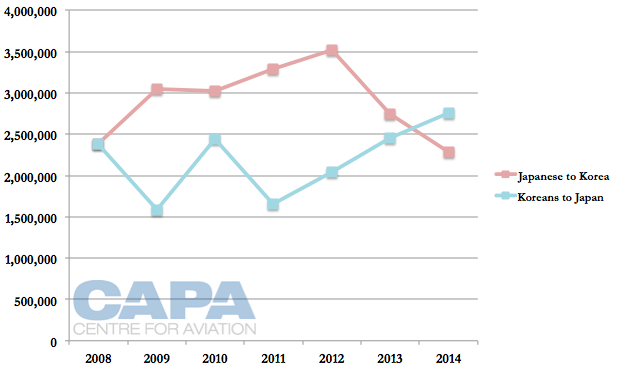 In 5M2015, Korean visitors to Japan are up 47% while Japanese visitors to Korea are down 15%. Jun-2015 and Jul-2015 statistics will be impacted by the short-lived MERS scare that saw a decrease in travel. Asiana and Korean Air are projecting restorations of capacity in Aug-2015 after brief dips in Jun/Jul-2015 (see graph below). 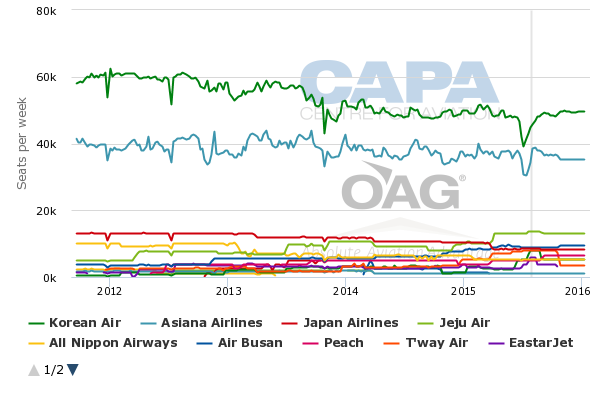 Korean Air and JAL marketshare has dropped. Jeju Air bigger than ANA and its LCCs 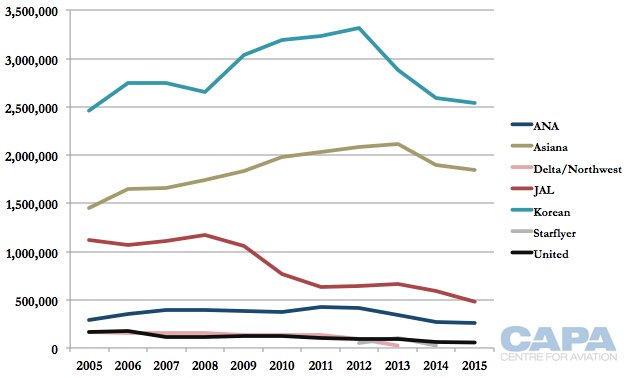 The full-service airlines are sometimes helped in market share gains when including their LCCs. This is not applicable for JAL, whose LCC Jetstar Japan does not fly to Korea (international services only recently launched, and only to Hong Kong). Korean Air and Jin Air have a joint market share of about 38% compared to Asiana/Air Busan's 32% and ANA/Peach/Vanilla's 7%.

Air Busan's growth has been far more aggressive than Jin Air, although not as much as Jeju Air. This could be attributed to Asiana being less interested in Air Busan's Busan market (where all of its Japan flights originate from) while Korean Air is more careful how much flying Jin Air does from Seoul, the base they both share. Asiana and ANA are both greatly helped in market share because of their LCC while Korean Air is not, if only because it is already so big. With a 9% market share, Jeju Air has more capacity than ANA and its LCCs combined. 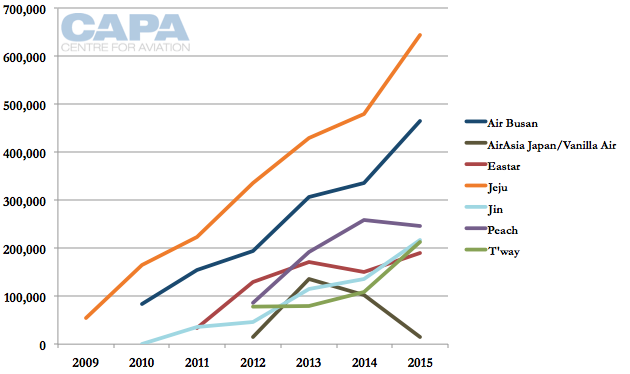 There are four dual-brand strategies in the Japan-Korea market

To combat the changing dynamics of the Japan-Korea market, dual-brand strategies have been deployed. This is a natural response when yields decrease but also when a LCC takes a sizeable presence. Jeju Air’s 9% marketshare in 2015 is still about a quarter of Korean Air, but globally Korean Air is far bigger, showing the inroads Jeju Air has made in the Japan-Korean market.

The Korean Air-Jin Air relationship is an interesting dual-brand case study: Korean Air is the largest airline in the Japan-Korea market and has more capacity (a 35% share) than all LCCs combined. Its LCC, Jin Air, is the fourth largest LCC in the market and is less than one-third the size of leader Jeju Air, indicating there has been some protection of Korean Air. It has only been in recent times Jin Air has expanded so significantly in the Japan-Korea market.

Of Jin Air’s major routes (excluding services that are effectively charters with only a few flights a year), Jin Air has taken over a route from Korean Air (Nagasaki-Seoul Incheon), launched an entirely new route to the group (Okinawa-Seoul Incheon) and entered markets Korean Air serves and has not decreased capacity on (Sapporo/Fukuoka/Osaka-Seoul Incheon).

This analysis excludes fare data but there appear to be suggestions Jin Air and Korean Air can fly alongside each other, as seen with “wingtip-to-wingtip” flying from Sapporo, Fukuoka and Osaka. The next step may be for Jin Air to enter the Tokyo market, where it is conspicuously absent despite LCC competition. Asiana’s LCC Air Busan flies to Tokyo from its namesake hub at Busan, but this decision would have been easy as Asiana did not serve the Busan-Tokyo market except for very brief periods in 2010 and 2011.

Summary of dual-brand developments in major Japan-Korea markets: through 2015

How important is the Japan-Korea market potential? For the three largest carriers in the market (all Korean), Japan accounts for 22% of seats at Korean Air (making Japan the largest market for Korean Air), 22% for Asiana (second-largest after China) and 37% of scheduled capacity for Jeju (largest market). Jeju is clearly reliant on the market, and so too Air Busan, where Japan accounts for an even larger 44% share.

For the LCCs, this brings risk of relying so strongly on one market. There has not been volatility aside from short-lived MERS. Despite political tensions, it appears Japan-Korea traffic does not face the same risk of a drop-off if political relations worsen, as was the case between Japan and China (although at play there was the state influencing travel agencies responsible for large group bookings).

Asiana has already tried a response, deploying a sub-fleet of all economy A320s. An apparently unsatisfactory response, and its absence in the Seoul LCC market, saw it propose Seoul-based LCC Air Seoul.

The start-up was dogged by complex relations with Air Busan, which Asiana only partially owns, and more recently by regulatory concerns over Asiana's safety after a string of incidents that follow its 2013 San Francisco crash. Air Seoul reportedly did not apply for a licence in Jun-2015, making it unlikely the airline would launch before 2016. Asiana and some commentators have blamed the delay on responding to MERS, but regulatory problems existed before MERS and continue to persist.

The delay is a blessing to Korean Air and Japanese LCCs, should they choose to accept the opportunity. Korean Air in 2015 is embracing a more integrated strategy with Jin Air via codeshares. Allowing Jin more access to major markets, and serving Tokyo, may be too adventurous, even if it is better to do so now before a LCC influx.

There is considerable flux and many opportunities arising. But, to date at least, this is not a market known for aggressive moves from agile carriers.