The events in Japan have had a “major impact on regional travel and tourism flows”, Association of Asia Pacific Aviation (AAPA) Director General, Andrew Herdman has said. He noted that Japan represents 6.5% of worldwide scheduled air traffic and accounts for a fifth of traffic within the Asia Pacific region.

“Domestic air services in Japan are operating normally with additional services being mounted to support recovery efforts in affected areas. Short-term demand for outbound travel from Japan increased significant, but has since moderated. At the same time, for understandable reasons, demand for inbound travel to Japan has fallen quite sharply,” Mr Herdman said.

Based on this situation, AAPA noted that airlines are adjusting their schedules to better match capacity to demand as the situation in Japan develops - see Appendix to this story. Demand is expected to be “significant lower” than normal both to/from Japan in the next couple of months before consumer confidence is restored and normal travel patterns are re-established. Mr Herdman stated normal travel patterns would return “hopefully by the second half of the year”.

A total of 71 airlines serve Japan and many have made schedule changes – including cancellations and reroutings - in response to the situation in Japan. The most heavily exposed at Tokyo Narita at JAL and ANA, followed by Delta, United, Korean Air, Cathay Pacific, Continental Airlines, Air China and China Airlines. 91.6% of the capacity at the airport is deployed internationally, based on Innovata data. 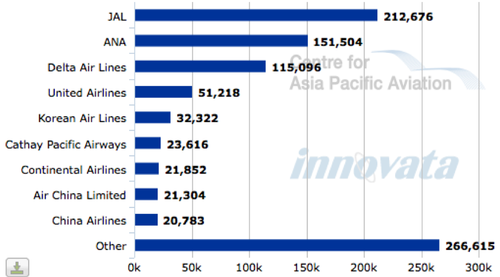 IATA this month similarly stated that while it is too soon to judge how the Japanese earthquake and tsunami will affect air travel, "the market is large enough to have a materially adverse impact on the international total for that month".

See related report: Japan crisis: US, China and South Korea most exposed to downturn in traffic

"Japan has been a relatively slow growth mature economy in the Asia Pacific region but premium travel is significant since Japan is still the third largest economy in the world (and was second largest until recently)," IATA stated. Meanwhile, Tokyo Narita Airport is a major premium hub. Some 13.4% of its total weekly capacity is in First or Business Class - more than double the worldwide average of 6.2%, according to Innovata. 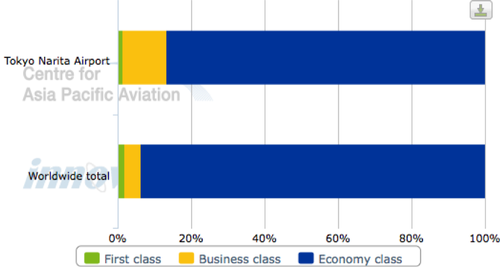 According to United Nations World Tourism Organisation, Japanese nationals spent USD25 billion on travel in 2009. Japan’s 83 million passengers per year domestic market (USD19 billion in revenues) is the most exposed by the disaster.

Internationally, the top 10 international markets connecting to Japan are US, China, South Korea, Chinese Taipei and Hong Kong. The most exposed market to Japanese operations is China where Japan accounts for 23% of its international revenues. Chinese Taipei and South Korea are equally exposed with 20% of their revenues related to Japanese operations, followed by Thailand (15%), the US (12%), Hong Kong (11%) and Singapore (9%). France is the most exposed European market at 7%, followed by Germany (6%) and the UK (3%).

Extend of impact on travel depends on economic impact

IATA noted that the extent to which the travel markets weaken would be largely shaped by what happens to the Japanese economy. Many economists are suggesting that once reconstruction begins the economy will rebound, but the length of the current downturn will depend critically on developments in the nuclear power situation.

World Bank, in its latest East Asia and Pacific Economic Update released on 21-Mar-2011, stated Japan’s real GDP growth will slow, but the slowdown will likely be temporary, as a result of the earthquake and tsunami and growth should start picking up after mid-2011 as reconstruction efforts get underway. The World Bank added that the short-term effect on the economies of developing East Asia is likely to be limited.

"Clearly given Japan's importance in East Asia, the tragic events unfolding will be felt in the region. But it's far too early to give an accurate assessment of the likely damages. At this stage, we expect the economic impact of this disaster on the East Asian region to be fairly short-lived. In the immediate future the biggest impact will be in terms of trade and finance. We expect growth in Japan will pick up as reconstruction efforts accelerate," Vikram Nehru, Chief Economist for the East Asia and Pacific region said.

Meanwhile, Japan's Government estimated damage from this month’s record earthquake and tsunami at as much as JPY25 trillion (USD309 billion), or four times the cost of Hurricane Katrina. The cost will reduce GDP by as much as JPY2.75 trillion (USD34 billion) for the 12 months commencing 01-Apr-2011. The figure, around 0.5% of the JPY530 trillion economy, reflects a decline in production from supply disruptions and damage to corporate facilities without taking into account the effects of possible power outages. Bank of Japan board member Ryuzo Miyao separately commented that the "ability to depress economic activity from the supply side is larger than the Great Kobe earthquake and we must bear in mind that these effects could linger for some time. The short-term effects are not insignificant.”