Hawaiian Airlines faces a challenging time during 1H2013 as its efforts to diversify outside of the Hawaii-US west coast market during the last few years need more time to bear fruit. Its ambitious long-haul expansion is accompanied by the introduction of a new inter-island subsidiary and the reworking of other portions of its inter-island network.

All of the changes Hawaiian is undertaking or planning to introduce are intended to bolster efforts to preserve its profitability, which has been fairly consistent during the last few years. But in the near future the carrier is facing pressure as its new long-haul Asian markets spool up and increases in competitive capacity create pressure in its trans-Pacific service to the continental US.

While the strategy Hawaiian is adopting to persevere in the long-term is solid, the airline might be attempting to accomplish too much too fast, which in the shorter-term is creating pressure on yields and unit revenues.

During the last five years Hawaiian has either introduced or announced service to 10 new destinations, the bulk of which are long-haul Asian services. Sendai will become Hawaiian’s fifth destination in Japan in Jun-2013 when it introduces new service as part of an add-on to its flights from Honolulu to Sapporo. It also operates service to Sapporo, Tokyo Haneda, Osaka and Fukuoka.

Other Asian destinations the carrier has added during that time include Seoul and Manila. During 2012 Hawaiian launched service to Brisbane, joining existing service to Sydney. New flights to Auckland debut in Mar-2013 followed by new flights to Taipei, Taiwan in Jul-2013.

The push into Asia with a particular focus on Japan is in line with Hawaiian’s goal of diversifying its network outside of North America. From the 12 months ending in 3Q2009 to the same period in 2012 the percentage of Hawaiian’s revenue stemming from its North American markets fell 15ppt to 47% while the carrier’s international markets recorded a 20ppt rise to 28%.

Hawaiian’s push into Japan was to capitalise on the strong tourism links between the two island regions. But during 2012 the weakening of the Yen and competitive capacity in some of its markets to Japan pressured the carrier’s results. Hawaiian cited Fukuoka in particular, explaining the market ramped up slower than other routes to Japan. Delta Air Lines during 2012 expanded its service between Honolulu and Fukuoka, which added some competitive pressure in the market.

During 4Q2012 the depreciation of the yen helped lower Hawaiian’s unit revenues by nearly 12% year-over-year as over half of the company’s foreign receipts are recorded in Japan’s currency.

Hawaiian also faced some competitive retaliation on service from Honolulu to Seoul as Asiana Airlines matched Hawaiian’s daily service in the market. During mid-2012 one-way seat capacity in the market increased by approximately 38%, and Hawaiian management concluded excess supply existed on the pairing.

The carrier remains hopeful that the new service to Auckland and Taipei along with increased flights to Sydney will offset some the currency-related pressures in its Japanese markets. It seems that consumer sentiment in Japan is rising, and the yen has gained some value as worry mounts about the euro zone’s bailout of Cyprus, but it is not clear that any of the slight improvement will translate into improved results for US carriers serving Japan.

Hawaiian during 2012 also faced competitive capacity in its trans-Pacific markets to the US mainland, as supply expanded 13% year-over-year between Hawaii and the US mainland during 4Q2012 and 12% from the Hawaiian islands to the country’s west coast. Hawaiian accounted for 3ppt and 2ppt increases, respectively, in each of those segments. The capacity increases pressured the carrier’s North American unit revenues during 4Q2012, which fell 10% year-over-year as Hawaiian discounted its fares to sustain passenger volumes.

The carrier’s management recently concluded that seat capacity from Hawaii to the US mainland would grow 11% year-over-year during 1Q2013 and 4% during 2Q2013 before falling by roughly 4% during 3Q2013. The lower growth during 1H2013 has created some pricing traction, but Hawaiian warned that as bookings for the first quarter are recorded well in advance, the pricing gains will make few positive contributions to the carrier’s 1Q2013 outlook.

Alaska Airlines, which has also ramped up service to Hawaii from the US west coast during the last few years, has also cited pressure in its Hawaiian markets. During 2013 its capacity deployment to Hawaii is expected to remain flat after pronounced growth to the Hawaiian islands since 2008.

Miscalculation in its inter-island push

Hawaiian also somewhat misfired during 2012 when it established a hub at Maui’s Kahului Airport to leverage more inter-island service. In early 2012 the airline unveiled plans to expand capacity from Maui to the neighbouring islands by 25%, which the carrier later admitted was a bit too ambitious. As Hawaiian worked to rationalise its supply the carrier’s performance in inter-island markets improved during 2Q2012, but weakened in the following quarters as the number of passengers feeding into its inter-island services from partner airlines tapered off, and it is not entirely clear when the sagging numbers will recover as oversupply from the mainland results in dilution of connecting passengers to the islands.

In addition to the establishment of a hub in Maui, Hawaiian in 2012 also unveiled plans to establish a new inter-island subsidiary to operate turboprops to smaller inter-island markets, and late in the year contracted Empire Airlines to operate two used 48-seat ATR-42 turboprops it acquired from ASL Aviation Group. The new carrier, dubbed Ohana by Hawaiian, is introducing flights in 2H2013 from Honolulu to the smaller islands of Lanai and Molokai. At the time it outlined its intent to launch the new carrier, Hawaiian stated that the new carrier would not tax its resources, noting the operation would be small in scale ranging from three to six aircraft.

Small operator Island Air also operates in the Honolulu-Molokai and Lanai markets, and will operate approximately 2,100 one-way seats from Honolulu to Molokai and roughly 1,150 between Honolulu and Lanai when Ohana is scheduled to make its debut, according to schedules from Innovata. Hawaiian plans to operate daily flights in each market, but it is not clear those smaller routes will support additional capacity. Inter-island operator go! also offers flights from Honolulu to Molokai through partner Mokulele that operates Cessna Caravans on the pairing. Additionally, small Cessna operator Pacific Wings also operates service in the market. go! and Island Air also operate flights from Honolulu to Lanai.

Given Hawaiian’s slight miscalculations in making a push from its Maui hub, it is not clear if there is enough demand on the routes. A search on the various websites from carriers serving the market shows that presently some flights for travel within a month are sold out, indicating some pent-up demand. Both Mokulele and Pacific Wings operate eight and nine-seat Cessna Caravans while Island Air has introduced a higher-gauge ATR-72 turboprop, joining its fleet of five 37-seat Dash 8 turboprops.

Island Air in Feb-2012 also announced the wet lease of a 33-seat Saab 340 turboprop to serve as a bridge aircraft as it planned to introduce three 70-seat ATR-72 aircraft by the end of 2012. Presently, the carrier only operates a single larger turboprop. But Oracle CEO Larry Ellison recently purchased Island Air, which will give the carrier significant financial support and the resources to potentially add the two remaining larger turboprops. It is not clear if Island Air will overhaul its strategy as a result of Mr Ellison’s purchase. He owns a substantial portion of real estate on Lanai, according to the Honolulu Star Advertiser. The purchase of Island Air could be a way to ensure a steady flow of business to his holdings on Lanai.

Hawaiian has much to prove after facing near-term headwinds

Hawaiian’s whirlwind expansion during the last few years has resulted in its top-line revenues growing from USD1.2 billion in 2008 to nearly USD2 billion in 2012, according to Morningstar research. During that time the carrier’s operating income also grew from USD431 million to USD1.1 billion. But the route expansion coupled with the introduction of nine Airbus A330-200 widebodies during that time has also resulted in its overall expenses jumping from USD431 million to USD1.1 billion.

The carrier has warned of tough times during 1H2013, especially for 1Q as yields are expected to fall 2% and unit revenues are forecast to decrease 6% to 9%.

All the recent moves by Hawaiian to strengthen its long-haul network (which also includes new service from Honolulu to New York that debuted in 2012) and its strategy to build a strong position in larger and short-haul inter-island markets, are seemingly logical moves to ensure it remains on solid footing for the future.

But with its fleet of Airbus A330s projected to grow from nine to 22 from year-end 2012 to the same period in 2015, the carrier will face increasing pressure to secure long-term profitable markets for those aircraft. Market potential for Hawaiian remains robust, particularly if the carrier’s flights to New York are successful. That market is likely a test case for potential additional US east coast markets including Miami, Houston and Dallas as well as markets in eastern Canada. 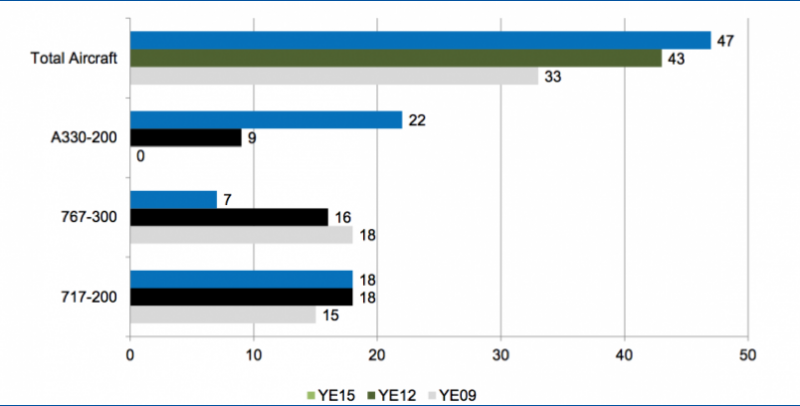 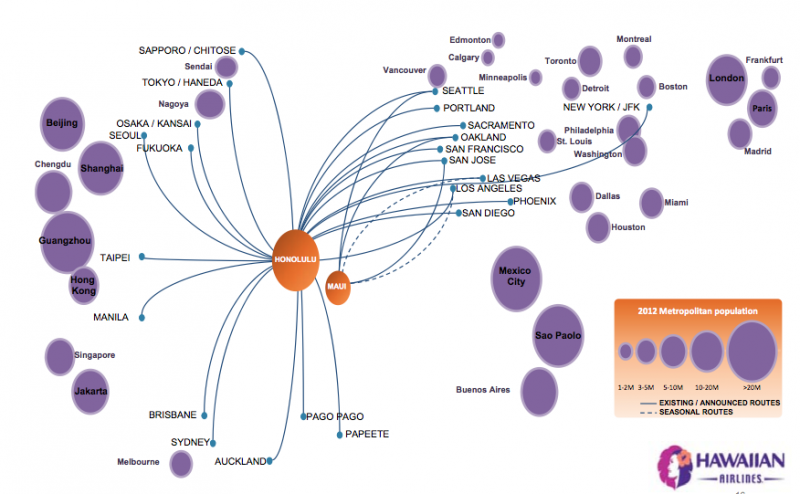 While Hawaiian has a broad market wish list, the reality is the carrier needs to withstand the immediate revenue pressure it faces in 1H2013. If it can navigate through that immediate tough period, the airline arguably has a sound enough business plan that entails reasonable revenue diversification. For Hawaiian, the real test of its adaptability seems to be emerging in the short-term.