Warnings by Hawaiian Airlines over softening demand on its mainland US flights came to fruition in its 3Q2012 results as a solid top-line performance was muted by significant year-over-year decreases in unit revenue and yields. Pressure in some of the carrier’s new Asian markets also contributed to the declines, which will continue into 4Q2012 as year-over-year capacity growth, particularly in the San Francisco bay area and southern California, remains high.

But those numbers were overshadowed by a 3.6% decline in yields and a 5.7% fall in passenger unit revenues year-over-year during 3Q2012. The company’s unit revenue decrease during the quarter was higher than the 1% to 4% decrease Hawaiian predicted in guidance released on 04-Sep-2012.

The carrier’s decrease in unit costs was also bigger than the 2% to 5% fall previously estimated in the Sep-2012 guidance as unit costs excluding fuel fell 6.8% during 3Q2012. Hawaiian attributed the better than expected unit cost performance to carrying fewer passengers and lower than anticipated maintenance expense.

Hawaiian encountered pressure during 3Q2012 in every region of its network – service to the US mainland, long-haul to Asia and its inter-island offerings. But carrier executives stressed the challenges were largely route specific rather than concentrated in one particular area.

Most of the pressure Hawaiian faced during 3Q2012 was centered on its flights from the Hawaiian islands to northern and southern California, but the airline also faced challenges in its new Asian markets.

Hawaiian over the last couple of years has made a concentrated push to enlarge and diversify its network away from service to the US mainland with a focus on long-haul flights to Asia. Presently, routes to North America account for roughly 47% of Hawaiian’s passenger revenue, down from 63% three years ago.

Hawaiian CEO Mark Dunkerley remarked that the carrier recorded favourable results on its routes to Tokyo, Osaka and Sydney (a route Hawaiian launched in 2004). But the new daily service to Fukuoka introduced in Apr-2012 “is ramping up more slowly than prior Japan startup”, Mr Dunkerley said. He emphasised it is still a good route for Hawaiian, but the ramp up was occurring at a more “normal” rate.

Delta Air Lines also launched seasonal service from Honolulu to Fukuoka in Dec-2011 and resumed the offering on 28-Oct-2012, operating daily service instead of a previously scheduled offering of six weekly flights.

Hawaiian has also faced competitive pressure in the Honolulu-Seoul market as Mr Dunkerley stated Hawaiian’s decision to offer daily service to Seoul beginning in Jul-2012 “was immediately followed by the decision of a competitor to do likewise”. He was referring to Asiana’s decision to increase its Seoul-Honolulu service from twice weekly to daily.

Schedules in Innovata show that from 27-May-2012 to 22-Jul-2012 the number of weekly seats on offer from Honolulu to Seoul increased by nearly 38% from 5,955 to 8,197. Mr Dunkerley concluded that presently excess capacity exists on the route, “which has the predictable effects on yield”.

Hawaiian does not expect the excess capacity between Seoul and Honolulu to remain in place for an extended period of time. Previously loaded schedules in the global distribution systems show that Asiana began reducing service on the pairing from daily to six weekly on 28-Oct-2012.

Korean Air remains the market leader in terms of seats on offer between Honolulu and Seoul, with its 55% share dwarfing Hawaiian's 25% share and the 20% share held by Asiana. Korean’s leading position and its stature as the largest carrier at Seoul Incheon provides some shield against the capacity battle between Hawaiian and Asiana, which are competing for a smaller share of passengers in the market. 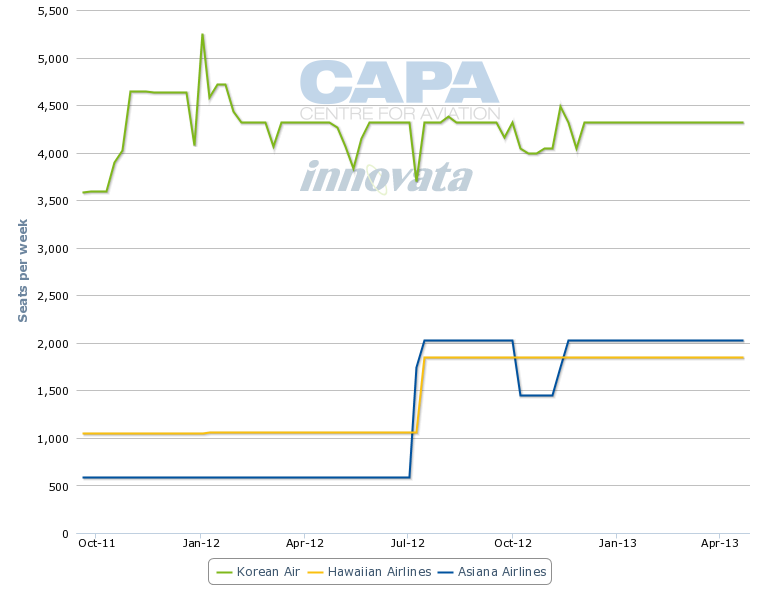 Hawaiian appears confident of the performance of those markets, “which, at least on current viewpoints, are quite a bit different than sort of the Fukuokas and Seouls of the world”, said Mr Dunkerley.

Hawaiian’s greatest challenge during 3Q2012 occurred in its service to the US mainland markets of the San Francisco bay catchment area and southern California.

The carrier had previously cautioned that excess capacity in those markets would create pressure during the quarter, which along with high hotel occupancy rates in Hawaii was creating a scenario where Hawaiian was trading volumes for fares.

Hawaiian estimates industry capacity in the San Francisco bay area (which includes Oakland and San Jose) was up 25% year-over-year in 3Q2012 and increased 15% in southern California. Mr Dunkerley stated demand during the peak summer period in Jul-2012 and Aug-2012 was robust enough to absorb most of the excess supply, but Hawaiian realised that yields would suffer as the peak in Aug-2012 transitioned into the trough in demand that followed in the seasonally weak period of Sep-2012. He concluded the “falling away of revenues in September was deeper than we initially estimated”.

Alaska and Hawaiian have introduced the largest amount of capacity in those markets. During Jan-2012 Hawaiian added a third weekly flight from San Jose, California to Maui, and transitioned seasonal service from Oakland to Kahului on Maui to a year-round offering. In Oct-2012, the carrier bolstered its offerings to daily from Maui to both San Jose and Oakland. During Jun-2012 Hawaiian also increased capacity on its service from Los Angeles to Honolulu.

Alaska and Hawaiian are the only competitors in the Oakland/San Jose-Maui markets. During the peak summer demand period in Jul-2012 Hawaiian held a 63% share of the nearly 2,950 seats on offer between Oakland and Maui, leaving Alaska with a 37% share. 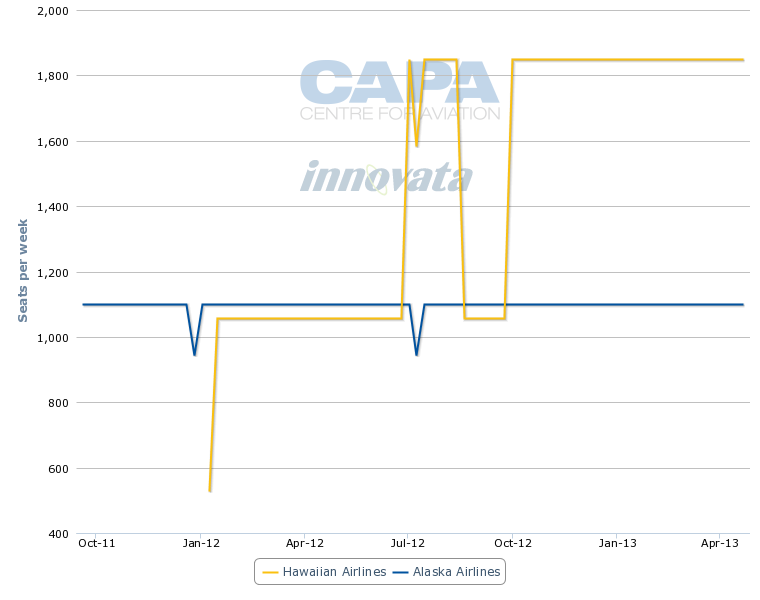 Hawaiian also held a commanding share in the San Jose-Maui market, accounting for 55% for the roughly 2,400 weekly seats on offer during the peak in Jul-2012 while Alaska held a 45% share. 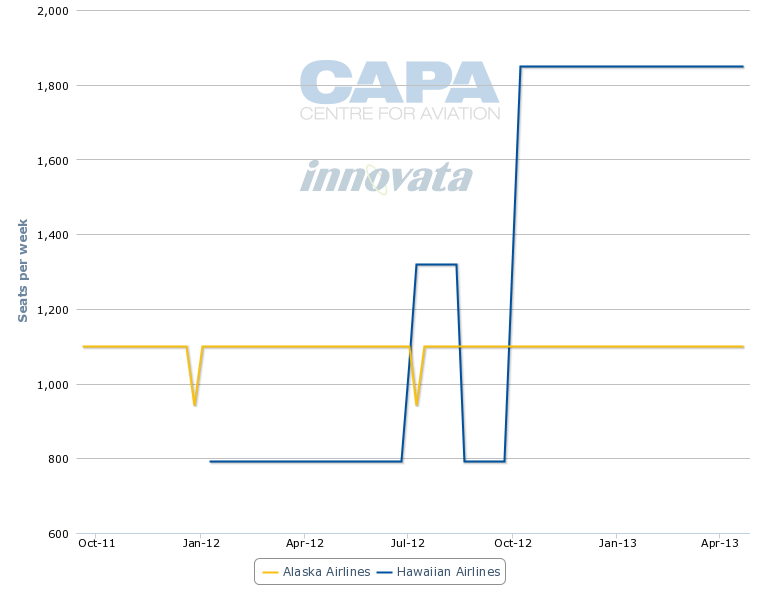 Alaska heightened competition with Hawaiian in southern California in Nov-2011, when it launched service from San Diego to Honolulu. In Apr-2012 Alaska also became a contender of Hawaiian from San Jose to Honolulu. 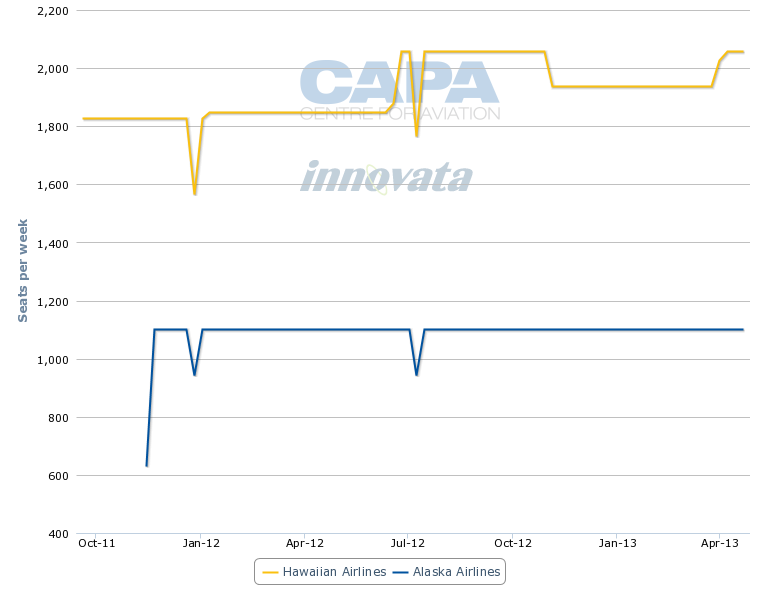 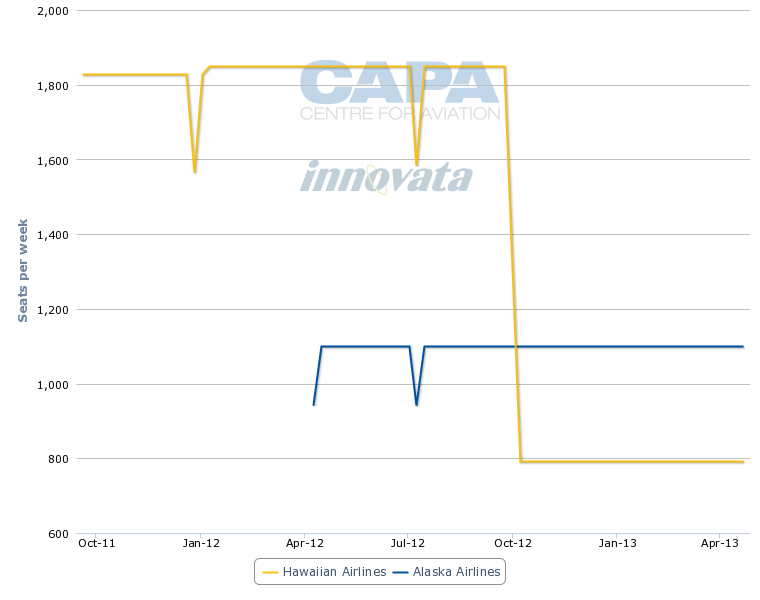 Mr Dunkerley remarked that looking ahead to 4Q2012 supply growth from Hawaii to the US west coast is decreasing compared to 3Q2012; but overall capacity remains high, and Hawaiian anticipates the continuation of a competitive pricing environment.

Hawaiian’s capacity appears to increase at the beginning of 4Q2012 in the San Jose/Oakland markets, as schedules in Innovata show the carrier added seats on those routes beginning in Oct-2012 that matches, or in the case of San Jose, exceeds the number of seats on offer during the peak summer period.

Alaska also plans to increase capacity between Hawaii and the west coast during 4Q2012 with the launch of service in Nov-2012 from Portland to Lihue, Bellingham to Maui and Anchorage to Kona. Alaska will faces competition from low-frequency leisure carrier Allegiant Air on Bellingham-Maui. Both Alaska and Hawaiian also operate service from Seattle (located 144km from Bellingham) to Maui.

Alaska has also admitted to weakness from the US west coast to Hawaii, and recently highlighted the same capacity increases in the San Francisco bay area and southern California as the 25% and 15% increases referenced by Hawaiian. Despite the weakness cited by both Alaska and Hawaiian stemming from excess capacity from Hawaii to the US west coast, neither carrier believes it is necessary to eliminate markets.

Mr Dunkerley stated that overall Hawaiian’s business to North America – which includes new service introduced between Honolulu and New York JFK in Jun-2012 – remains solid. Routes to North America accounted for about 1% of the decrease in passenger unit revenues during 3Q2012. He stated Hawaiian would fine tune its capacity in certain North American markets according to time of year and seasonality but stressed, “what we are not doing is drawing back from any of the routes in our portfolio”.

Alaska has also said it would make refinements in its Hawaiian network, but has not indicated any route is in danger. With capacity expected to be high again in 4Q2012, both carriers will continue to feel unit revenue pressure, and may have to make further adjustments to their respective US-Hawaii networks.

Hawaiian also saw its passenger unit revenue decline in its inter-island operations by 7% during 3Q2012 as load factor declined 3.2ppt on capacity growth of 11%.

The carrier in Jan-2012 transitioned its operations at Maui’s Kahului Airport to a hub, and boosted capacity to neighbouring islands by 25%. Hawaiian somewhat miscalculated the spool-up of the Maui hub, and as a result the carrier’s inter-island unit revenues fell by 6.5% year-over-year during 1Q2012.

Mr Dunkerley declared that during 2Q2012 the revenue gap had been eradicated, reflected in unit revenue growth of 11% year-over-year.

Outlining the inter-island market dynamics during 3Q2012, Mr Dunkerley stated that Hawaiian saw strong traffic throughout the quarter, but demand fell short of Hawaiian’s capacity increases. Another element that pressured the carrier’s inter-island performance during 3Q2012 was a drop off in passengers from other airlines transferring onto Hawaiian’s flights throughout the islands.

Hawaiian during 3Q2012 also opted to change its pay structure on inter-island flights to incentivise passengers to book earlier. The efforts proved to be successful; however, Mr Dunkerley stated the changes Hawaiian encouraged in the booking structure “turned out to be a slightly misleading indication of the level of traffic we could expect when the aircraft doors finally closed”.

Hawaiian’s chief executive admitted the carrier has not done a good job with managing its inter-island business during 2012. But he remains convinced it is a good business for Hawaiian, and it is within the carrier’s ability to improve its inter-island performance. “I don’t think that what’s at play here is somehow a change to the macro-dynamics of the business. I just don’t think we’ve done as good a job as we should have done,” Mr Dunkerley said.

The carrier has already cut capacity by 4%-5% in its inter-island markets, which Mr Dunkerley expects to help improve Hawaiian’s results in that region. But he warned it could take a quarter to judge the effects to the capacity changes.

Hawaiian has previously stated that 1H2012 would feature a disproportionate amount of startup costs and pension expense. As that scenario is complete, Hawaiian expects unit costs excluding fuel during 4Q2012 to decrease.

At the same time Hawaiian expects 4Q2012 capacity growth of 28.5% to 30.5% year-over-year. With no Airbus A330 widebody aircraft scheduled for delivery until Mar-2013, sequential capacity growth during the next couple of quarters is not material, but year-over-year comparisons remain high as Hawaiian has added four widebody aircraft this year. The company has taken delivery of nine A330s since 2010, and is projected to add 13 aircraft from 2013 to 2015.

Hawaiian’s attempts at geographical and revenue diversification during the last couple of years have been largely been successful, reflected by profits recorded in 2009 and 2010 and a minimal USD3 million loss in 2012. But the airline clearly faces challenges in markets where it is expanding as well as the mature regions of its network. With its high levels of capacity growth planned during 4Q2012 and overall supply expansion for 2012 of 20.5% to 23.5%, the carrier will continue to face revenue pressure if traffic fails to materialise to match its supply growth.