Hawaiian Airlines believes its expansion into Asia during the last 18 months is starting to bear fruit, with revenue share from those flights growing as the flights begin to mature. The carrier can now begin charting normal trends on its new routes after launching flights to Tokyo Haneda and Osaka as Japan was attempting to recover from the tsunami and earthquakes that struck the country in Mar-2011.

The carrier encountered unfortunate timing with the Nov-2010 launch of flights to Haneda and the Jul-2011 introduction of flights to Osaka, with the earthquake and tsunami impacting launch performance. Hawaiian also inaugurated new service from Honolulu to Seoul in Jan-2011. Despite the challenging circumstances, data from the US Department of Transportation (DoT) show Hawaiian in 2011 recorded a nearly 79% load factor on flights originating from Haneda, 74% loads on flights from Osaka and 72% load factors on new service from Seoul to Honolulu. Those numbers are skewed somewhat by the fact that Hawaiian launched flights to Haneda and Osaka with 264-seat Boeing 767-300ERs and then transitioned to larger-gauge 294-seat A330-200 aircraft. Hawaiian still operates 767s on its flights from Honolulu to Seoul, which could indicate the carrier is still building up its passenger base before opting for the larger A330s.

Company CEO Mark Dunkerley recently told analysts that the load factors on its international flights are generally lower than on Hawaiian’s North American routes, but the airline has been able to charge favourable prices in its international markets, particularly on flights from Japan and Sydney. Australia's Jetstar operates between Sydney and Honolulu and the route is often its best performing.

Hawaiian estimated that its international services, which also include flights to Manila, accounted for 27% of its total passenger revenue of USD391 million recorded in 1Q2012, compared to 9% in 3Q2010. In Apr-2012 Hawaiian continued its expansion into Japan through the launch of new service from Honolulu to Fukuoka.

Mr Dunkerley describes Hawaiian’s growth in international markets as the cornerstone of the carrier’s strategy even though the airline is launching new US mainland flights to New York JFK from Honolulu in Jun-2012. Targeting Japanese travellers is a natural evolution for Hawaiian as visitors to Hawaii from Japan accounted for the second highest arrival rate of visitors by air to the Hawaiian islands in 2011. The restructure of Japan Airlines (JAL) during its recent bankruptcy saw aircraft downgauges, creating shortfalls in capacity that Hawaiian has partially been able to exploit.

Japanese travellers averaged shorter stays in Hawaii, but their per person spending per day was the highest among tourists from any other geography. 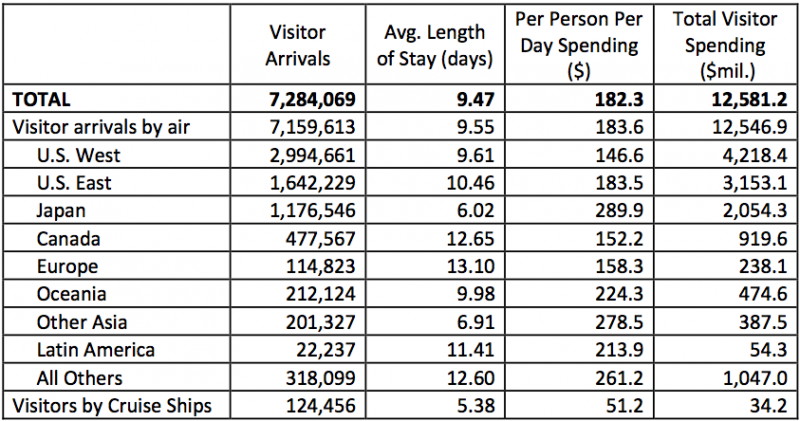 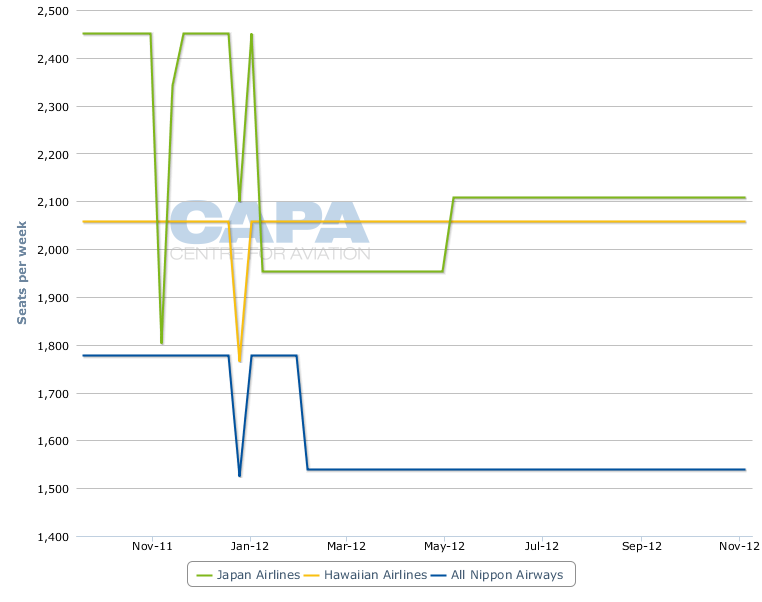 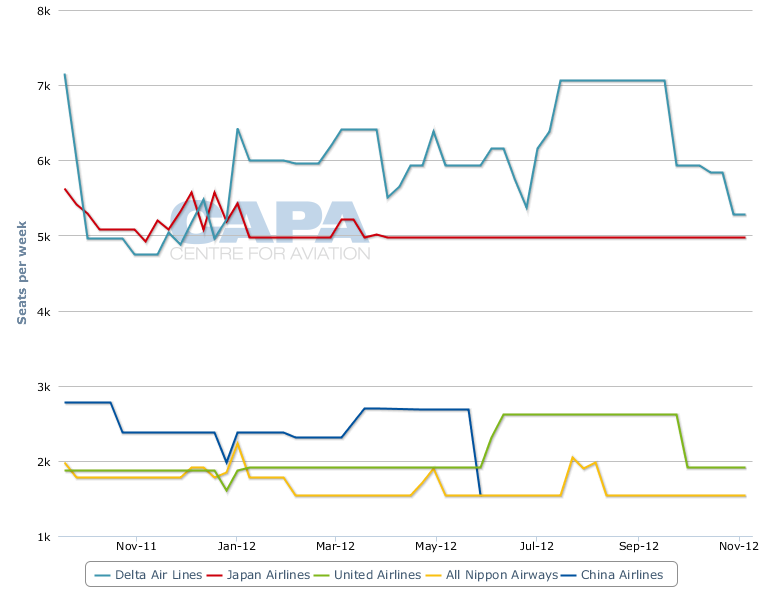 Delta and JAL operate from Honolulu to Osaka while Delta operates on the Honolulu-Fukuoka route. Beginning in July Hawaiian will hold a 67% seat share in the Fukuoka market, and will keep a majority seat share from mid Jul-2012 through Nov-2012, ranging from 53% to 62%. 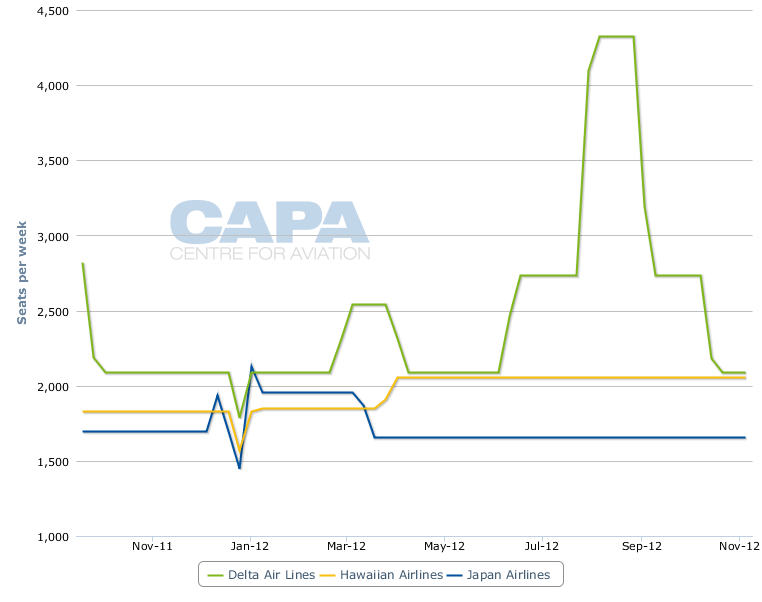 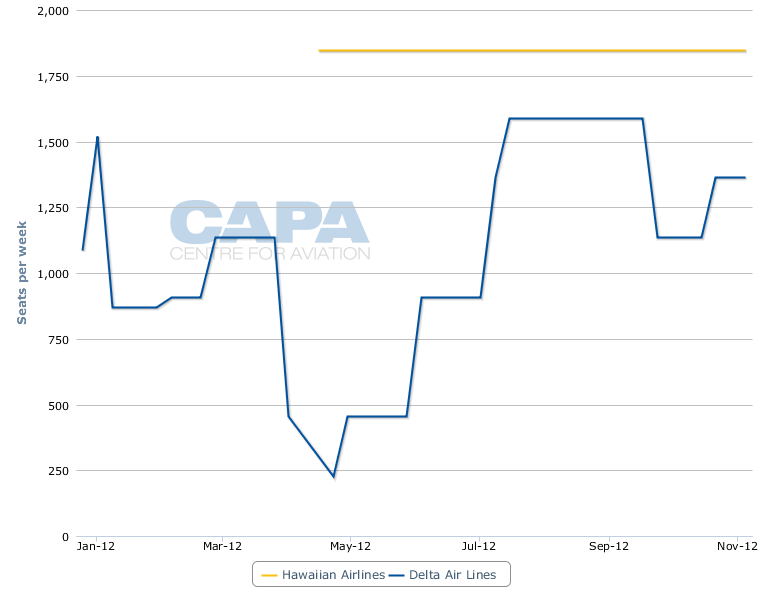 Although statistics from the Hawaiian Tourism Authority show visitor arrivals from Japan to Hawaii were down 5% in 2011 (partially due to Japan's earthquake and tsunami), the group projects that scheduled non-stop seats to Hawaii from Japan are expected to rise 21% year-over-year for the May-2012 to Jul-2012 time period, which correlates with carrier confidence that the Japanese long-haul market has largely recovered from the Mar-2011 tsunami and earthquake.

Hawaiian’s competitors in its flights from Honolulu to Seoul are Korean Air and Asiana. Asiana re-entered the market in Sep-2011, launching two weekly flights between Honolulu and Seoul. The Hawaii Tourism Authority has recently indicated Asiana could increase its service to daily in Sep-2012 while Hawaiian has already announced plans to bolster its four weekly Honolulu-Seoul flights to a daily service beginning in Jul-2012. For the moment the market seems to be absorbing the capacity introduced as the tourism authority estimates that the 107,702 Korean travellers visiting the Hawaiian islands in 2011 was a 23% year-over-year increase, and of that total 83% were first time visitors to Hawaii. 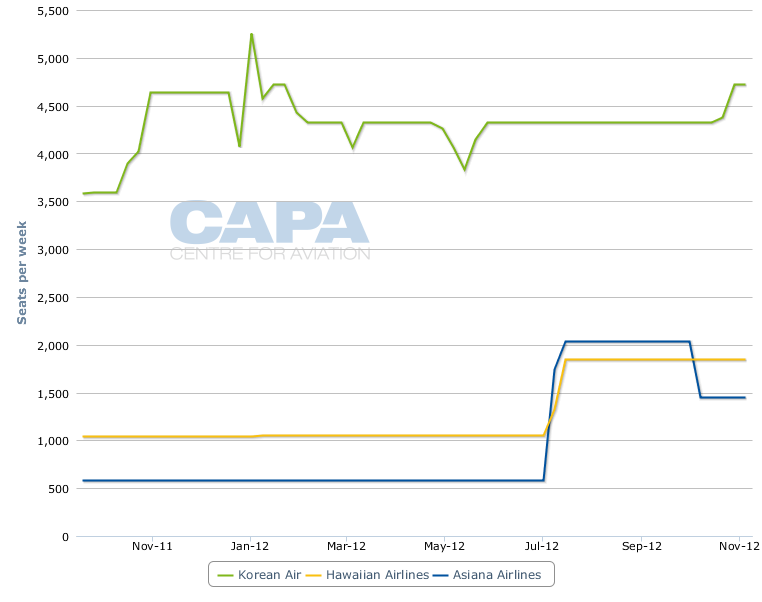 Hawaiian’s entry into the Japanese market roughly four months before the Mar-2011 tsunami has made year-over-year performance comparisons difficult for the carrier. As the market returns to a normal equilibrium the airline now has some clarity in gauging how its flights to Japan are performing. Mr Dunkerley recently explained the carrier is essentially examining market performances from the last six months, and stated Hawaiian’s performance is generally exceeding expectations. “Where the variability comes is the sort our week-in and week-out seasonality that we’re getting used to,” he remarked, using Japan's recent Golden Week holiday as an example.

The push by Hawaiian into Asia is part of an overall strategy to diversify its revenue base from its mature US mainland flights. During 2Q2012 Hawaiian projects flat capacity growth on its mainland flights even as the new Honolulu-New York service comes online and expanded service from its Maui hub to Los Angeles, Oakland and San Jose begins. Mr Dunkerley explained Hawaiian is adjusting some of its flights from Seattle, and is exiting the Portland-Maui market, ceding the route to Alaska, which introduced service in 2009 and currently offers 11 weekly roundtrip flights on the pairing.

Hawaiian should see an even higher contribution from its Asian flights to revenues as that time period is the seasonal high period for those markets. But as three A330s come online in the 2Q2012 and none of its 12 767s are being returned, Hawaiian will absorb a lot of widebody capacity. Once those deliveries are complete, Hawaiian will have a fleet of 10 Airbus widebodies. The additional supply is pressuring unit revenue growth, as Hawaiian projects a modest 2%-5% increase in PRASM during 2Q2012.

But Hawaiian’s management feels confident of its strategy going forward that rests on further international expansion. As for doubts about the carrier’s entry into the New York market, Mr Dunkerley stressed the route is booked at a higher load factor for the summer time period than any other US mainland route served by the carrier, and is currently tracking ahead of revenue projections. Yet the carrier’s focus remains on international expansion as Mr Dunkerley declared Hawaiian’s major focus is squarely on expanding those markets in the years ahead. With 13 A330s and six A350s remaining on order, Hawaiian has ample capacity coming online to support its international network expansion.