US carriers Alaska and Southwest conclude trends are pointing to solid demand at the start of 2013 despite the expiration of certain tax breaks threatening to dampen consumer appetite for travel. Both carriers cite favourable booking trends as overall industry capacity remains disciplined. But Alaska during 2013 will be one of the few carriers to increase its supply relative to the industry as it expects capacity growth of 7%-8% versus 2% growth for Southwest and virtually flat to negative growth among the large US network carriers.

Alaska appears poised to replicate the results it garnered from its higher than average capacity growth in 2012 of 6% compared with a range of negative 2% to 2% growth at US legacy airlines. While Southwest had 6% comparable capacity growth to Alaska during 2012, the Dallas-based carrier plans a 4ppt drop in capacity growth year-over-year to 2% for 2013. Despite the higher than average expansion of supply, Alaska grew its top-line revenues by 8% during 2012 to USD4.7 billion. Expenses grew 7% to USD4.1 billion, which helped lift the company’s operating income 18% to USD532 million.

US Airways’ greater capacity expansion relative to its peers is largely attributable to the addition of higher-gauge 183-seat Airbus A321s replacing smaller Boeing narrowbodies, while Southwest spent 2012 absorbing AirTran after closing on the purchase of its smaller rival in 2011. A substantial portion of Alaska’s capacity increase during 2012 was the result of introducing five new markets – Philadelphia, Kansas City, San Antonio, Fort Lauderdale and Monterrey, California – and the launch of 15 new route pairs net of reductions. The carrier expanded from San Diego with the launch of new transcontinental service to Orlando, Florida and intra-California markets of Fresno, Santa Rosa and Monterrey. During Mar-2013 Alaska is adding another transcontinental flight from San Diego when it launches new service to Boston.

Presently, Alaska executives see no reason to revise the carrier’s planned capacity growth for 2013 as company CFO Brandon Pedersen concluded that broadly speaking both business and leisure demand remain stable. Alaska recorded a 2.5% rise in passenger unit revenues during 2012, which was lower than the US mainline carriers (with the exception of United) and on par with the 2.6% growth recorded by Southwest. Alaska’s unit revenue growth was somewhat crimped by the introduction of more US transcontinental flights, which increased the company’s system-wide stage length.

Despite its strong financial performance in 4Q2012 and the full-year 2012, Alaska did note that the new developmental transcontinental markets, which also include new service from its Seattle hub to Philadelphia that debuted in Jun-2012, did pressure unit revenues. But Mr Pedersen assured those new routes were meeting the company’s expectations. Alaska also saw unit revenues fall during 4Q2012 on its Hawaiian routes year-over-year on a 35% rise in capacity.

Alaska has made a major push into Hawaii since 2008 when two major carriers serving the islands, Aloha and ATA, both shuttered operations under the pressure of record high fuel prices. Alaska, Hawaiian, and to a lesser extent, US major carriers have largely filled the gaps left by those now defunct airlines. Mr Pedersen explained Alaska has already adjusted capacity in certain markets within its Hawaii network, and is considering additional refinements to its schedule. Previously, Alaska executives have concluded that service gaps to Hawaii have been largely filled, and it seems the carrier will be more tactical in expanding service to the islands. Alaska expects Hawaiian markets to account for 20% of its capacity deployment by region during 2013, which is flat growth compared with 2012, and a levelling off of the substantial year-over-year increases recorded since 2009. Four years ago markets to Hawaii represented just 7% of Alaska’s capacity deployment. 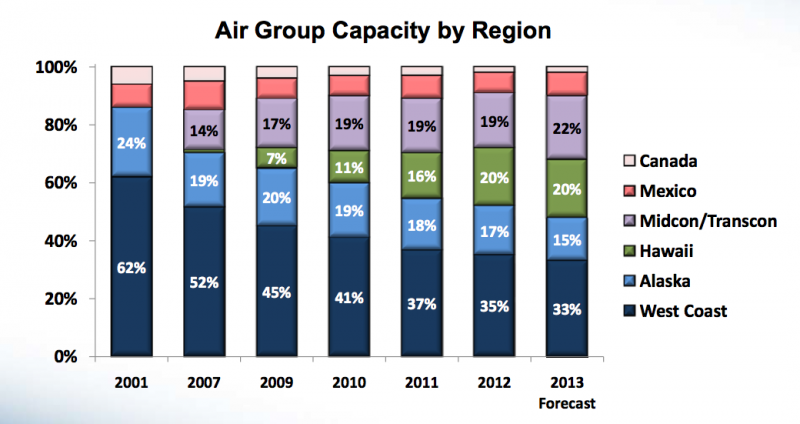 Alaska plans to increase capacity deployed into US mid-continental and transcontinental markets in 2013. Capacity in those markets will represent 22% of Alaska’s capacity, a 2ppt rise from 2012. The carrier has already announced new service from its Seattle hub to Salt Lake City beginning in Apr-2013, and more service from San Diego is likely in store after Alaska recently announced it was establishing a flight attendant base at the airport. The San Diego base joins existing flight attendant bases at Alaska’s hubs in Seattle and Portland, and its major focus cities of Los Angeles and Anchorage.

Alaska during 1H2013 sees some competitive capacity pressure in certain pockets of its network – from the Pacific Northwest to the San Francisco Bay area and Southern California and from the Bay area to Mexico. “But overall on a weighted average, competitive capacity in our markets is marginally down in the next few quarters,” concluded VP planning and revenue management Andrew Harrison.

Both Alaska and Southwest Airlines are adding a cautionary caveat to their conclusions that demand trends are remaining solid. Mr Pedersen stated that Alaska remains mindful that a Social Security tax break expiring for workers in the US could affect disposable income among consumers. The disappearance of the tax relief means employees will pay more into the Social Security benefit programme, which is diminishing take-home pay.

Southwest CEO Gary Kelly expressed similar concern and stated that while the carrier sees encouraging signs in the broader US economy, the company is monitoring demand closely for any signs the tax breaks could weaken consumer appetites for travel. At this point the carrier is not seeing any signs of weakness, he concluded.

During 4Q2012 Southwest recorded a 3.4% rise in yields as four system-wide fare increases lifted unit revenues 2.3% year-over-year. Carrier CFO Tammy Romo stated that close-in business passengers accounted for 20% of the carrier's mix of travellers during 4Q2012, which was sequentially flat with 3Q2012.

Southwest is also predicting a rise in unit revenues for Jan-2013 of 2%-3%, but also warns the benefit from recent fare increases has been less than what the carrier has historically recorded, which results in a lot of the revenue gains during early 2013 likely being driven by higher load factors rather than yield.

Mr Kelly seemed pleased that a benign industry capacity environment was blanketing the threat of weakened demand due to the expired tax break. He estimated US domestic capacity should drop 1% to 2% during 1Q2013.

Despite 2% capacity growth during 2013 driven by the addition of higher capacity Boeing 737-800s and the addition of six seats on its -700s as part of a cabin retrofit, Southwest expects the total number of trips on offer to fall 2% to 3% year-over-year. Southwest has boldly declared it will realise the full USD400 million in estimated merger synergies with AirTran in 2013, as the two networks become fully optimised and the carriers embark on a codeshare before AirTran is fully integrated into Southwest during 2014.

That declaration occurs as Southwest saw its net income during 4Q2012 (excluding special items) fall 49% to USD78 million. The carrier did post a favourable 136% rise in full year 2012 profits to USD421 million. Alaska also saw its 4Q2012 net income decline year-over-year by 31% to USD44 million and like Southwest posted a gain in full-year 2012 net income from USD245 million to USD316 million.

But unlike Southwest, Alaska has managed to keep unit cost growth under control as the carrier’s 1.7% rise excluding fuel for 2012 was 2.4ppt lower than Southwest’s 4.1% rise year-over-year. Southwest expects a further spike in unit costs during 1Q2013 of 5% to 6%. However, overall Southwest estimates only a 1% rise in unit costs for the full year 2013 as the carrier works to ease cost pressure during the back half of the year through several initiatives including reducing overheads to save USD100 million and completing the fleet reconfigurations that have triggered a rise in unit costs. Southwest expects the six seats added to its 737-700s should boost revenue by USD250 million.

Alaska expects to continue to keep its unit costs in line during 2013, with a decline of 1% on the 7% to 8% capacity expansion scheduled for the year. While the company’s capacity growth is higher than the industry average, Alaska has proven it can sustain revenue momentum with aggressive expansion of its supply. From 2010 to 2012 the carrier’s revenue growth outpaced its capacity expansion, which suggests Alaska is executing the correct supply-demand balance. 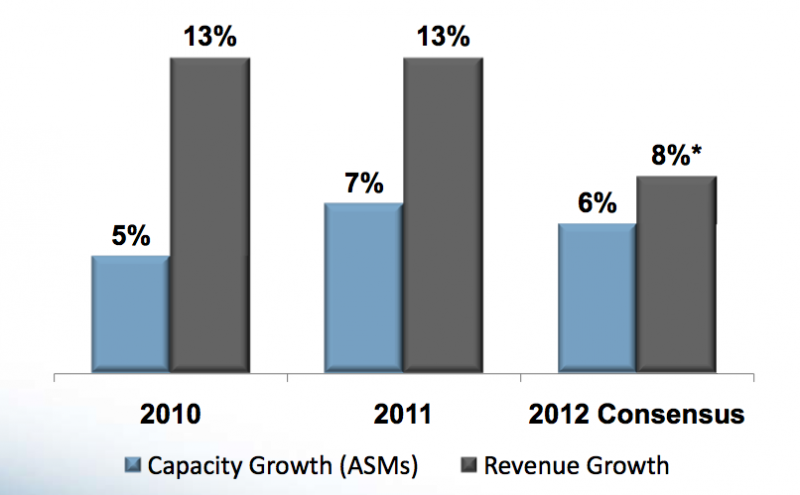 US network carriers along with Alaska and Southwest are cautiously optimistic heading into 2013 that the consistently solid demand the industry experienced during 2012 will continue. Airlines have largely been operating under a cloud of uncertainty for the last few years and are revamping their business models to better withstand sudden upheaval. For US carriers, 2013 will be no different as the same challenges remain – striking a favourable capacity mix while keeping costs contained as a means to preserve perpetually tenuous profitability.