Despite having the bulk of its attention diverted to aggressively pursuing a merger with American Airlines during 2012, US Airways recorded a strong financial performance on a stand-alone basis, boasting that its annual profit for the year was the highest in the airline’s history. Presently, company management believes the profitability momentum should carry over into 2013 as demand remains solid and its corporate bookings continue to grow.

Excluding special items, US Airways in 4Q2012 more than doubled its profit year-over-year to USD46 million from USD21 million. The carrier boasted its USD537 million profit (also excluding special items) for full year 2012 was the best in the company’s history, and represented a 384% improvement over the USD111 million net income recorded in 2011.

US Airways’ growth in top-line revenue for 4Q2012 and the full year was driven by an increase in passenger unit revenue of 1.4% for 4Q and a 3.3% rise for the full year. Among the US carriers that have reported 4Q2012 financial results, US Airways unit revenue was better than American’s flat growth but below the 4% increase recorded by Delta. For the full year, Delta retained a unit revenue premium of 7% compared to a 5.8% rise at American and a 3.3% increase at US Airways. But the 2.5% rise in US Airways unit costs during 4Q2012 was lower than the 5% increase recorded by Delta, which battled cost creep throughout 2012, and will continue to see cost pressure in 2013. US Airways’ full year unit costs in 2012 grew 0.5% while Delta charted a 5% increase.

Outlining the carrier’s performance by region, US Airways president Scott Kirby stated the airline’s domestic unit revenues grew 2% year-over-year during 4Q2012 while unit revenue growth in Latin America fell 3% due to a rise in industry capacity. Delta, which increased capacity in its Latin American markets 8% during 4Q2012, also saw its performance deteriorate in the region as unit revenues fell 1.4% and yields dropped 6%. Expressing similar sentiments to Mr Kirby, Delta executives concluded that capacity to Latin America was slightly outpacing demand. But Delta believes the supply-demand balance in the region should rationalise going forward. American Airlines also recorded a 9.4% rise in Latin American capacity during 4Q2012, and like its two legacy counterparts, recorded a 5.4% slide in unit revenues and a 2.6% decline in yields.

US Airways has the least penetration into Latin America among the US network carriers, serving Rio de Janeiro daily from its Charlotte hub. The carrier’s long-coveted service to Sao Paulo from Charlotte is scheduled to begin in May-2013.

Unit revenues grew 6% year-over-year for US Airways in its trans-Atlantic markets in 4Q2012, compared nearly 8% growth for Delta and a roughly 4% increase recorded by American. US Airways during 3Q2012 highlighted strong business demand in its European markets as it stole some corporate share from other carriers. The airline also cited strong leisure demand from the US to Europe as the euro’s decline against the dollar made travel to Europe attractive to passengers originating in the US.

See related article: US majors including Delta and United cite sustained demand as 3Q2012 comes to a close

Mr Kirby cited strong unit revenue growth of 9% for US Airways during 4Q2012 in the corporate segment – a 9% rise in the domestic space and a 13% increase in its corporate international unit revenues. The growth is encouraging after the carrier during 3Q2012 cited some softness in corporate demand compared to Mar-Apr-2012. At that time executives concluded businesses were still engaging in core travel, but were hesitant to attend conferences and conventions amidst economic weakness in Europe and an uncertain outcome in fiscal cliff negotiations in the US. The US averted fiscal crisis with the enactment of the American Tax Relief Act of 2012.

As corporate demand started to rebound, the strongest performer for US Airways during 4Q2012 was the technology sector followed by the services sector.

Part of US Airways’ success in bolstering its corporate revenues is “knowing who we are”, said Mr Kirby, noting the carrier has targeted corporate sectors in which it has a strategic advantage. US Airways has a smaller network relative to its legacy peers, and its international reach is disproportionately smaller. Based on schedules in Innovata for the week of 21-Jan-2013 to 27-Jan-2013, only 10% of US Airways’ seats are deployed in international markets (the majority to Europe), compared with 25% for American, 14% for Delta. Roughly 23% of United’s seats are dedicated to international markets.

But with greater international breadth US Airways could also significantly increase its share of the corporate market, which is likely a driver in its aggressive pursuit of a merger with American Airlines. By combining with American, US Airways would instantly gain access to Asia and the accompanying corporate demand generated by the region, as well as enlarging its presence from the US to Latin America. American is the dominant carrier between the two regions, representing 48% of the available seats from the US to lower South America and 35% of the seats on offer between the US and upper South America. 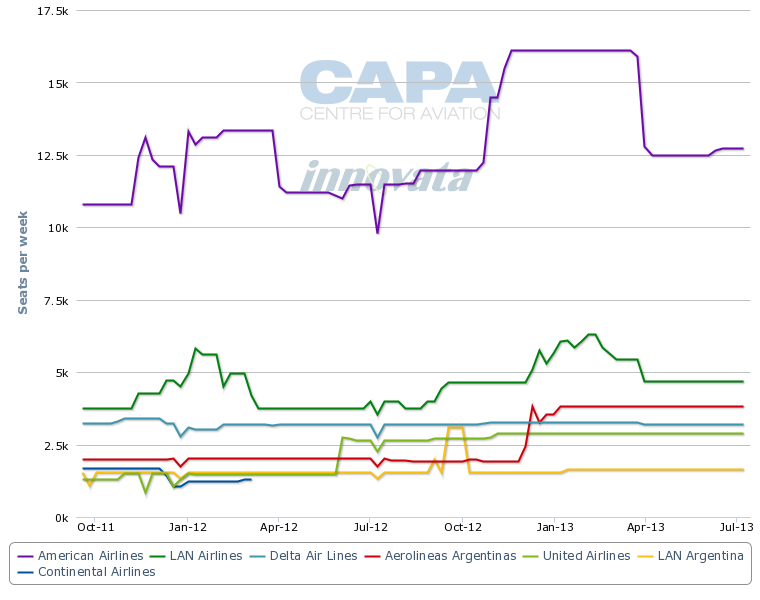 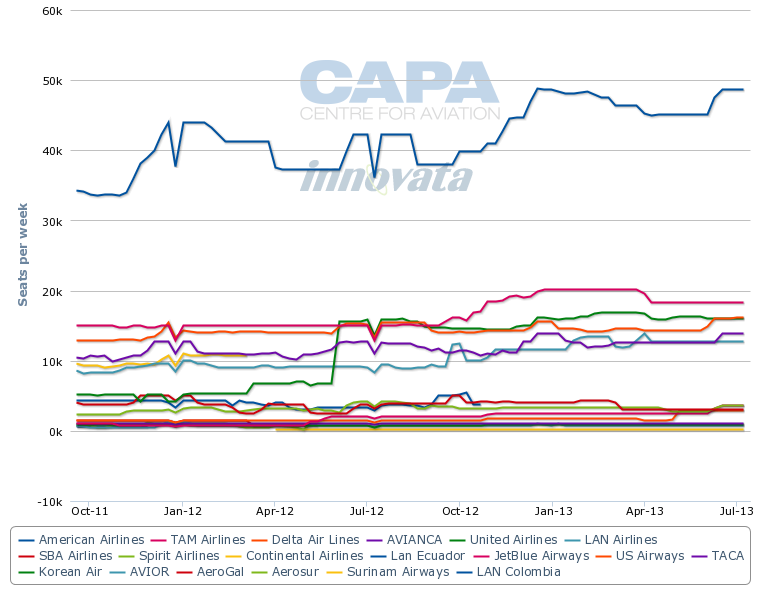 Mr Kirby remained upbeat about the demand environment at the start of 2013. He cited the beginning of January is usually the heaviest booking time of the year, and bookings are already up 8% year-over-year. He did admit that presently unit revenue growth is being driven more by higher load factors than yields, but believes that strong load factors will be a precursor to favourable yields for the industry. US Airways expects passenger unit revenue growth of 3% in Jan-2013 and between 2% and 4% for Feb-2013 and Mar-2013.

US Airways’ planned 3% capacity growth for 2013 is likely somewhat higher than the supply produced by its US network peers during 2013. The growth is driven by the delivery of 21 larger-gauge aircraft in 2013. US Airways is adding 16 183-seat Airbus A321 aircraft and retiring 18 142-seat Boeing 737-400s. Three older A320 aircraft are also being retired as five A330 widebodies will also be delivered to US Airways in 2013. The airline’s domestic mainline capacity is scheduled to increase 3.7% during 2013 while supply in its regional Express operation will shrink 1.7% year-over-year. Capacity in the carrier’s international markets is expected to increase 3.6%, driven in part by new service from its Charlotte hub to London Heathrow scheduled to begin in Mar-2013.

Management at US Airways believes all the pieces are in place for the carrier to equal or improve the record setting profitability the carrier achieved during 2012, including flat unit cost growth and robust demand environment. While it is likely a matter of if and not when US Airways and American merge, for the moment US Airways continues to prove that it can fend for itself as a stand-alone carrier.