Delta Air Lines believes 2013 is starting on a favourable note as overall demand trends remain positive and its unit revenue for 1Q2013 is forecast to grow in the mid-single digits. The carrier anticipates solid results in all its geographical entities, with the exception of Asia-Pacific, where its concentration in the important Japanese market has dragged down revenue performance in that region. To combat weakness in its Japanese markets triggered by the country’s weak economy, Delta during 2013 plans to centre the majority of its trans-Pacific capacity outside of Japan.

Carrier executives offered guidance for 2013 as Delta recorded a 4Q2012 profit of USD238 million and net income for the full year of USD1.6 billion.

Excluding special items that included charges related to its domestic fleet restructuring and a loss on the early extinguishment of debt, the carrier’s 4Q2012 profit was USD7 million and full year net income was USD1 billion. During 4Q2011 Delta recorded a profit of USD425 million and net income of USD854 million. Delta felt a sting of roughly USD100 million during 4Q2012 from the effects of “Superstorm Sandy” that struck the US east coast in Oct-2012.

The effects of unit cost pressure Delta experienced throughout much of 2012 was reflected in the 8% rise in operating expenses to USD8.3 billion during 4Q2012, which outpaced the 2% rise in top-line revenue USD8.6 billion, resulting in a 52% drop in operating income to USD352 million. The airline’s full year operating income increased 10% to USD2.2 billion as total operating revenues increased 4% to USD36.7 billion and expenses grew 4% to USD34.5 billion.

Delta executives seemed unfazed by the decline in 4Q2012 profits and instead highlighted to analysts that 2012 was its fourth consecutive year of profitability and Dec-2012 marked the 21st consecutive month that the carrier recorded a unit revenue premium over its US counterparts.

During 4Q2012 Delta recorded a 4% increase in passenger unit revenues and a 7% rise for full-year 2012. The carrier recorded the strongest unit revenue growth in 4Q2012 in its trans-Atlantic markets, where unit revenues increased nearly 8% year-over-year resulting in yield growth of 4%. Delta president Ed Bastian told investors the carrier’s strategy of managing trans-Atlantic capacity tightly during slower demand periods was paying off. Over the last couple of years Delta has focused on managing its capacity from season-to-season to preserve the profits it enjoys on trans-Atlantic markets during the peak US summer season.

Delta increased its capacity to Latin America 8% year-over-year during 4Q2012, the largest increase in any of its regional markets. The region was also Delta’s weakest performing entity as unit revenues fell 1.4% year-over-year and yields slid 6.2%. Mr Bastian remarked that markets in Mexico and Central America recorded strong revenue growth, and the carrier’s unit revenues in South America were flat year-over-year. Unit revenues also decreased in the Caribbean, where Delta increased its capacity by 25%. During Dec-2012 through Apr-2013 Delta is making a push from its New York LaGuardia hub and JFK into new Caribbean markets, and expanding service in some of its existing markets in the Caribbean from New York. New service includes LaGuardia-Bermuda and JFK-St Maarten. The airline is also transitioning seasonal flights from JFK to Aruba and Punta Cana and LaGuardia to Nassau to year-round service.

Demand in South America remains strong, remarked Delta EVP network planning, revenue management and marketing, Glen Hauenstein. But in the short run, “the capacity might be outrunning it just a tad”. He predicted that moving forward capacity should catch up with demand levels in the region. Delta’s rival American Airlines increased capacity to Latin America by 9.4% year-over-year during 4Q2012; its unit revenues in the region fell 5.4% year-over-year and its yields fell 2.6%.

Yields in Delta’s Pacific markets sank 6% year-over-year as revenues remained flat and capacity increased 2%. Mr Bastian stated weakness in the region was driven by softness in Japan’s economy, industry capacity growth and negative effects of a weaker Yen. Japan’s currency has been plagued by deflation, and the country’s central bank recently doubled its inflation target to 2% and expanded the country’s quantitative easing programme.

Mr Bastian stated the weakness in Japan was however offset by strength in non-Japan routes. Delta is the largest carrier operating between the US and Japan based on seats on offer, accounting for a 29% seat share based on schedules in Innovata for week of 20-Jan-2013 to 26-Jan-2013. The airline became the largest carrier operating between the two countries after it absorbed Northwest’s Pacific network once the two carriers merged in 2008. 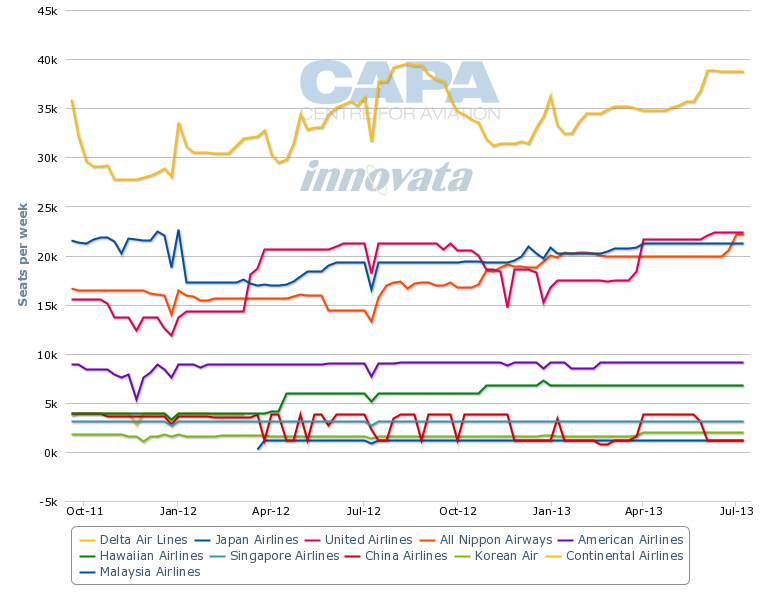 Delta serves Japan from its hubs in Detroit, Minneapolis, New York JFK, and Atlanta as well as Seattle, Portland, Los Angeles, San Francisco and Honolulu. The carrier also has an intra-Asia hub at Tokyo’s Narita airport.

Hawaiian Airlines represents some of the industry capacity expansion from the US to Japan during the last couple of years since it introduced flights from Honolulu to Tokyo Haneda, Osaka and Fukuoka. Hawaiian competes with Delta in all of those markets. Delta has also previously stated that Japanese carriers Japan Airlines and ANA have also increased their capacity to the US, further intensifying competition.

The carrier’s outlook for the Pacific for 1Q2013 remains mixed, said Mr Bastian, who remarked Delta is seeing positive trends in its Asian markets outside Japan. He stated Delta’s challenges in its Japanese markets are being mitigated somewhat by a hedging programme that currently have market-to-market value of USD75 million, and for the full year Delta is 90% hedged at ¥80 to the dollar.

Delta is readjusting its Pacific capacity to mitigate weakening demand in Japan as Mr Bastian stated that 2013 “will be the first year that the majority of our transpacific capacity will be outside of Japan as we continue to diversify our Pacific portfolio to the more rapidly expanding economies in the Pacific rim”. Japan’s GDP growth is estimated at 1.7% for 2013 7.1ppt below the 8.8% GDP growth forecast for China.

Delta is continuing an expansion from Seattle into Asia, launching service to Shanghai in Jun-2013 and transferring rights it has to serve Detroit-Haneda to Seattle. Presently, Delta is the second largest carrier operating from Seattle based on available seats, holding a 10% share. Seattle previously served as a mini-hub for Northwest, which allowed the carrier to serve several trans-Pacific routes from the airport. 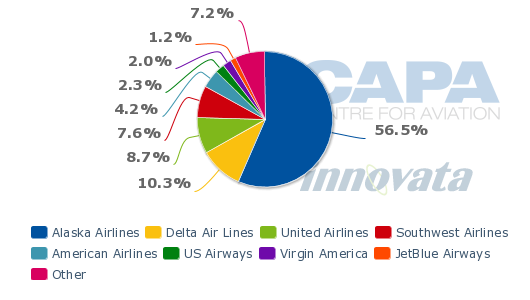 Delta’s current offerings from Seattle to Asia include service to Beijing, Osaka and Narita while its SkyTeam partner Korean Air operates service to Seoul.

Demand remains solid – for now. But international capacity will reduce 3-5% in 1Q2013

During 4Q2012 Delta recorded a 9% increase in system corporate revenues, with double-digit growth recorded in the trans-Atlantic and Latin markets. Mr Bastian said the carrier netted a 31% rise in corporate revenue in the banking sector that was driven by new contracts that were launched in the December quarter.

Delta expects its system capacity to fall 2% to 4% during 1Q2013, with domestic seat supply shrinking 1% to 3% and international supply falling 3% to 5% year-over-year.

The carrier expects unit costs excluding fuel to grow 6% to 8% in 1Q2013, reflecting previous warnings by Delta that unit cost pressure it experienced during 2012, driven by wage increases from a new pilot contract ratified that year, would pressure its unit costs through 1H2013.

The carrier has previously stated the cost pressure would abate in the back half of 2013 as it works to extract USD1 billion in costs from its business.

Delta is beginning 2013 in a position of strength relative to its US legacy peers, and the demand commentary from one of the country’s largest carriers is encouraging. The carrier appears to be making the right network moves to eliminate weak spots in its global network.

Despite its unit cost challenges, Delta should continue its profitability streak in 2013 as strict capacity discipline has become a mainstay of its business strategy.