Europe’s LCCs are making a first entry in Algeria

It is rare but it still exists: a market with virtually no LLC presence. Low-cost carriers have an approximate 0.8% share of scheduled seats flown to/from Algeria. Liberalisation of air transport is in its infancy across northern Africa, yet the absence of LCC services to Algeria falls short of the overall penetration of low-cost carriers in the region. LCCs have an approximate 18% capacity share (in terms of seats) on routes to/from north Africa, according to OAG data for the first nine months of 2012.

Algeria’s situation contrasts sharply with the situation at its western neighbour Morocco where the no-frills segment conquered an approximate 35% capacity share in terms of seats deployed on international routes. Morocco has an Open Skies agreement with the European Union, and this explains the high market penetration of LCC on international routes, but Algeria’s eastern neighbour Tunisia has no such ASA in place and LCCs still produce just 8% of seats flown to/from the country. Western Europe is the main market for these three north African countries.

But a light breeze of change might be blowing through Algeria’s apparent adversity to opening its skies to budget operators. Spanish LCC Vueling Airlines will commence a four times weekly service from Barcelona El Prat Airport to Algiers Houari Boumediene Airport on 19-Sep-2012 and a twice weekly from Barcelona to Oran Es Senia Airport on 28-Oct-2012. The flights will be operated with single-class Airbus A320 narrowbodies.

Vueling will be the second European LCC to operate to Algeria. Jetairfly, the Belgian LCC/ leisure carrier owned by the TUI Travel group, already flies from Brussels Airport to Algiers and connects Brussels South Charleroi Airport with Oran. Jetairfly has a mere 1.3% share of all scheduled seats produced on routes between between Algeria and western Europe.

It is not surprising that European airlines are the first to venture with low-cost services to Algeria as western Europe is the country’s primary market, accounting for about 79% of international scheduled seats flown to/from Algeria, according to schedules in Innovata for the week of 03-Sep-2012 to 09-Sept-2012. Algeria’s situation is in this sense similar to its neighbouring countries Morocco and Tunisia, where western Europe accounts for 77% and 64%, respectively, of international scheduled seats.

All other regions are markedly less important in Algeria’s air transport system. North Africa represents only 9% of international scheduled seats and the Middle East 5%. 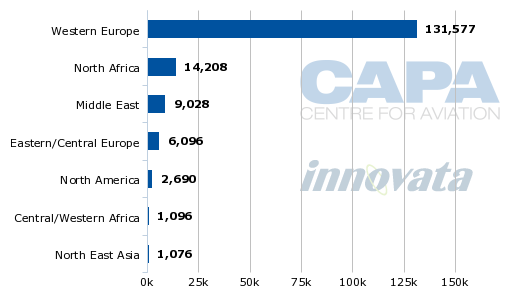 In spite of the large size of the country (Algeria is the 10th largest country in the world and the largest in Africa) and its 35 million population, domestic traffic is limited, with just 10% of total scheduled seats deployed on routes within Algeria.  The country’s national carrier Air Algerie is the sole operator on domestic routes and it has also a market leading position on international routes, with an approximate 46% capacity share. Aigle Azur, a French airline, is the country’s second largest carrier with a 29% share of international seat capacity. Air France is the third largest operator in Algeria in terms of seat capacity on international routes, holding a near 6% share. 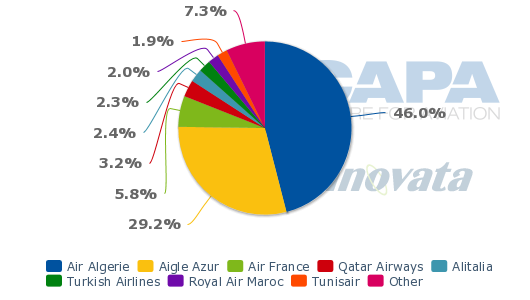 Air Algerie CEO Boultif Mohamed Salah in Aug-2012 stated that the company is seeking to strengthen its international activities and in particular on the African continent, where it currently services five gateways (Bamako in Mali, Cairo International Airport in Egypt, Casablanca Mohammed V in Morocco, Nouakchott in Mauritania and Tunis Carthage Airport in Tunisia), but at present it deploys about four fifths of its international seats on routes to western Europe.

The airline’s position on routes to western Europe is under pressure. In only one of its six core country-to-country markets (Spain) is Air Algerie the main capacity provider. Operations are also suffering from poor on-time performance, and although OTP has increased from 41% in 2010 to 65% in 2011 it is still below the target of 70%, Mr Boultif admitted.

Traffic between the north African country and western Europe records a peak from mid-June to mid-September owing to ethnic and VFR (visiting, friends and relatives) travel. Vueling will enter the market on 19-Sep-2012; airberlin pulled out at the end of Oct-2011 and Spanair had an approximate 4% share of seats flown between Algeria and western Europe at the time of its collapse in Jan-2012. 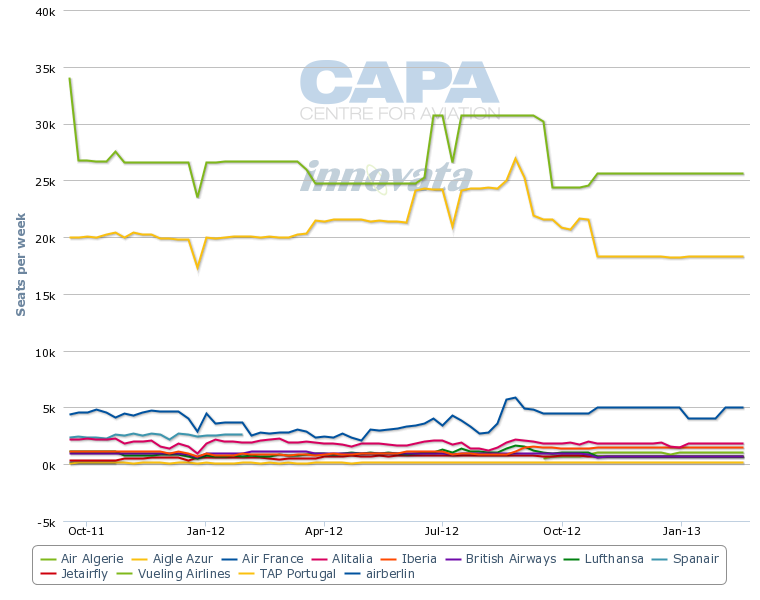 Owing to its historic ties, France is the main market with some 54,500 one-way seats per week, which equates to 83% of all seats flown between Algeria and western Europe.

Privately held Aigle Azur and Air Algerie are in a neck-to-neck race for market leadership and have a respective 46% and 45% share of weekly seat capacity between the two countries, based on schedules in Innovata for the week of 03-Sep-2012 to 09-Sept-2012. The two airlines recently came under public pressure in France following claims of price fixing on routes between France and Algeria, but Mr Boultif firmly dismissed the allegations as “fabrications” at a press conference in Paris in Aug-2012.

Air France offers 9% of weekly seat capacity between France and its former colony. 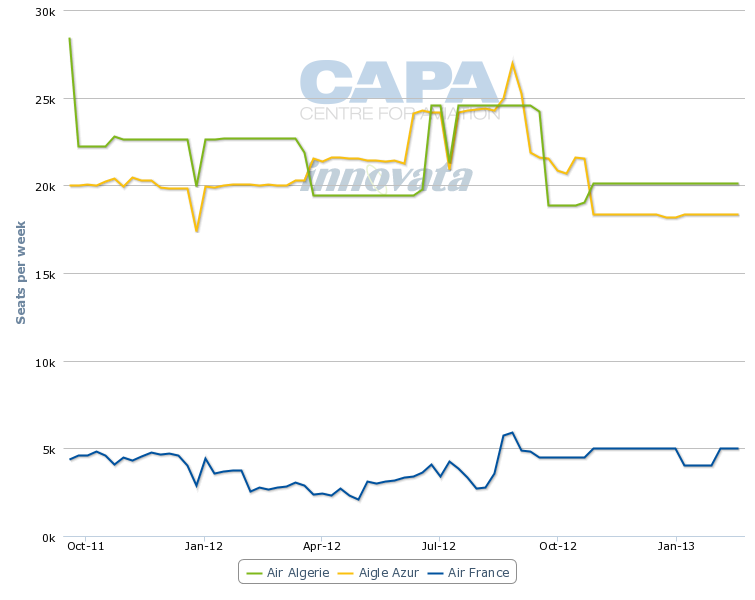 Aigle Azur, whose origins go back to 1946, operates scheduled service to 13 airports in Algeria from Paris Orly and Charles de Gaulle Airport and the French regional airports of Bordeaux, Lille, Lyon, Marseille, Basel/Mulhouse EuroAirport, Nice, Strasbourg and Toulouse, aboard a streamlined fleet of A320 family aircraft. Aigle Azur offers a full business class on several of its routes to Algeria.

Paris Orly to Algiers Airport is the  largest route of Aigle Azur and Air Algerie and a further two routes, Paris Orly-Oran Airport/Oran-Paris Orly Airport and Algiers-Marseille feature in the top 10 of both carriers. 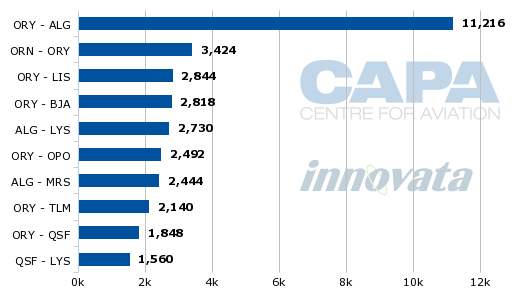 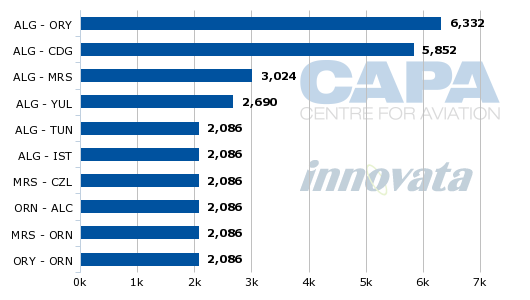 Iberia and Iberia affiliates are increasing their footprint to Algeria

Spain is Algeria’s second largest market in western Europe in terms of seat capacity but it accounts for only 7% of seats between Algeria and western Europe. Air Algerie has a market leading position on routes between Algeria and Spain, holding an approximate 66% share of scheduled seat capacity, based on schedules in Innovata for the week of 03-Sep-2012 to 09-Sep-2012. The carrier has benefited from Spanair’s collapse in Jan-2012 and has doubled its capacity to Spain in terms of seats since. Spanair had a leading 54% share of seat capacity between the two countries.

Iberia is also now waking up to the opportunities. Air Nostrum, which operates under a franchise agreement and codeshare with Iberia, commenced a four times weekly service from Alicante to Oran and will launch a single weekly Valancia-Algiers flight on 08-Sep-2012. Both routes were operated by Spanair but since the latter’s demise Air Algerie had enjoyed a monopoly on the routes.

Air Algerie is also losing its comfortable monopoly status and a further two Spanish routes, Barcelona to Algiers and Barcelona to Oran with Vueling commencing service on both routes. Spanair used to operate on Barcelona-Algiers and had a 75% share of seat capacity at the time of its collapse. Iberia is Vueling’s largest single shareholder. 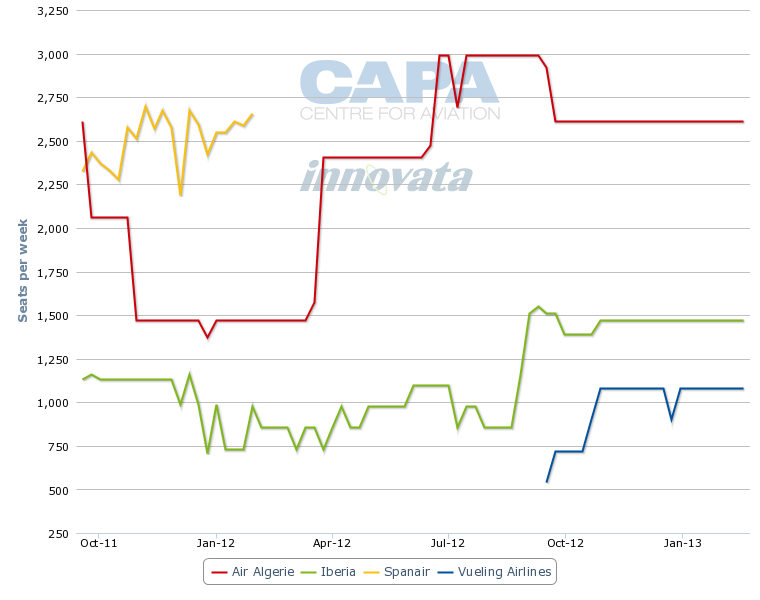 Vueling’s two new routes to Algeria are not the start of a sudden invasion of Europe’s LCCs to Algeria. The Algerian authorities are keen to protect their inefficient flag carrier, but the market offers definite prospects for no-frills operators in Europe. Vueling has recognised this. It will not only tap in to the Spain-Algeria market, but it will try to take a bite out of the large France to Algeria market. The LCC has a wide network in the hexagon and offers passengers the possibility to connect over its base in Barcelona El Prat Airport.