European airlines reported single-digit growth last year - a welcome improvement from 2009's depressed level - but 2010 was a lacklustre year overall. Full year data has been released by the Association of European Airlines (AEA), the European Low Fares Airline Association (ELFAA) and EUROCONTROL. As noted by EUROCONTROL, growth across the continent last year was driven mainly by LCCs.

ELFAA reported 6% passenger growth among its nine member airlines to 172.4 million passengers while AEA reported 2.7% growth to 343.5 million for its 36 member airlines. Based on EUROCONTROL data, LCCs reported an increase in flight movements of 6.9%, though this slowed markedly at the end of the year. Overall growth stood at 0.8% to 9.49 million, an increase of 0.8% year-on-year.

ELFAA and AEA figures were distorted by the effects of a string of external shocks during 2010, most notably the airspace closures associated with the Icelandic volcanic eruptions in Apr-2010 and May-2010, but also the unprecedented disruptions at airports caused by extreme weather in late Nov-2010 and Dec-2010.

2010, as noted by AEA, was also “notable” for the frequency and intensity of industrial action which affected flight operations, very often as a response to national austerity measures linked with the recession and its aftershocks, particularly in the Eurozone.

According to EUROCONTROL, an estimated 175,000 scheduled flights were cancelled during 2010 as a result of weather, the ashclouds, strikes and capacity shortages. Even if the effects of the ash-cloud are removed, this is 2.5 times as many cancellations as in 2009. Delays increased from an average of 1.6 minutes per flight in 2009 to 2.7 minutes per flight in 2010.

EUROCONTROL noted that flight growth was concentrated in a few States in 2010 with Turkey, Italy, Ukraine and Germany adding most traffic to the European network with Russia also a clear source of growth. The economic crisis and a series of general strikes reduced traffic in Greece overall and the UK and Ireland both ended the year with fewer flights than the already reduced levels of 2009.

“In 2010 we already saw the beginnings of growth and in 2011, we expect further increase of at least 3.6% in the number of flights across Europe. This will come from the bounce-back from the ash-cloud, but also as airlines continue to search for the right level of capacity to meet the post-economic crisis demand”, said David Marsh, Head of Forecasting at EUROCONTROL. 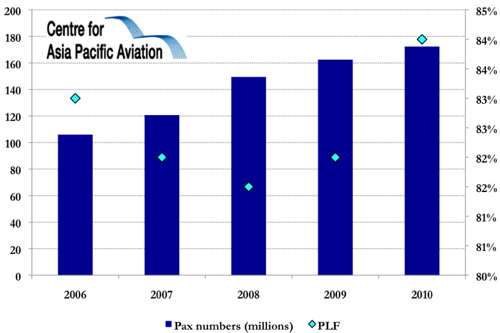 ELFAA Secretary General John Hanlon commented, “these strong figures further demonstrate that ELFAA low fare airlines are well on track to become the dominant force in intra-Europe scheduled air travel". He added: “At a time when other airlines are again falling back on Government handouts in the face of declining passenger numbers, ELFAA members are bucking the trend by showing consistent annual growth, carrying more passengers every year.”

ELFAA passenger numbers in 2009 and 2010 by member carrier 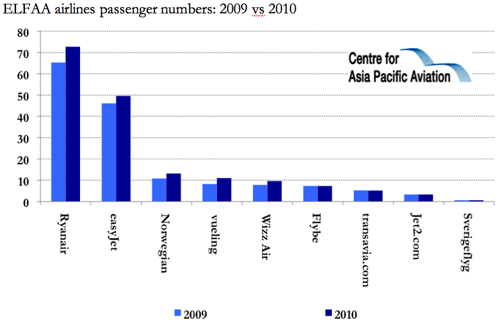 ELFAA member carriers operated a combined 2741 routes in Dec-2010, with a fleet of 728 aircraft. The airlines employed 26,345 permanent staff. 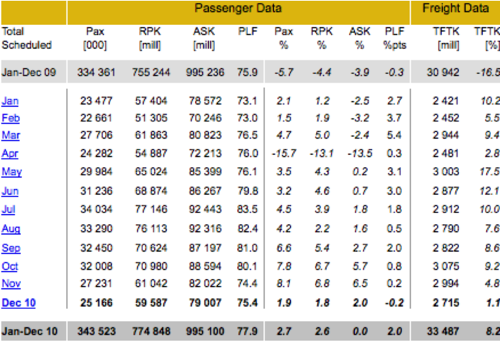 AEA anticipates its members will announce a “very small” combined operating profit for 2010. The association also acknowledged that the figure reflects an “average spread ranging from impressive turnarounds for individual carriers to significant losses for others.

AEA Secretary General Ulrich Schulte-Strathaus continued: “While the recession of 2008/9 affected airlines and their markets around the world, the recovery process is very different between one region and another, and particularly in Europe we are lagging behind the rest of the world. This alone places European airlines at a competitive disadvantage vis-à-vis their global rivals, and it is vitally important that the political and operating environment within which we do business does not burden us further”.

2011 is widely expected to be a year of profitless growth for European carriers. Capacity is set to grow strongly, but demand is likely to struggle to keep up. 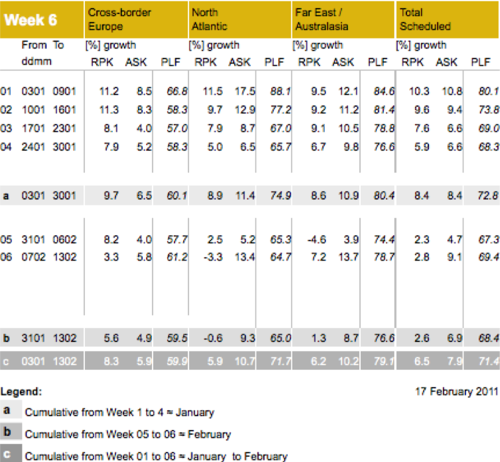 IATA, in its Dec-2010 financial forecast, estimates that European carriers would reported a EUR100 million net profit in 2011 and an EBIT margin of just 0.9%. This would make Europe the second worst performing region again in 2011, behind Africa.

The medium and long-term outlook is somewhat more encouraging, at least in terms of traffic growth.

EUROCONTROL's long-term forecast sees traffic in Europe to grow to 16.9 million flights in 2030, or some 1.8 times the 2009 figure. The average annual growth is likely to be between 1.6% and 3.9%, leading to between 13.1 and 20.9 million flights in 2030. According to the forecast, growth will be faster in the early years, stronger in Eastern Europe and for arrivals and departures to/ from outside Europe than for intra-European flights. Turkey is forecast to be the largest generator of extra flights in European and Germany is expected to see the biggest increase of flights in its airspace.