India was the fastest growing leading long haul market from Europe in 2018 (using seat data from OAG Schedules Analyser). Nevertheless, India is only Europe's number four long haul market and is small compared with the USA, China and Canada (despite India's population being close to China's).

Europe-India is led by Jet Airways and Air India, both of which are growing quickly. Jet launched Manchester-Mumbai in Nov-2018, and Air India's entry into Denmark and Sweden in 2017 gives it a presence in eight European markets. However, European airlines control more than half of the seats in this market and have stronger connections behind their hubs.

Other operators are also starting to challenge incumbents: Alitalia launched Rome-Delhi in Nov-2017 and Air Italy launched Milan to Delhi and Mumbai in Dec-2018. In addition, LOT Polish Airlines may start what would be Central Europe's only service to India.

This CAPA India report examines data on Europe-India capacity and growth, analysed by country and by airline.

India is only the ninth largest country market outside Europe for international airline seats from Europe in 2018.

However, if North Africa and the Middle East are excluded, India is Europe's number four long haul market, behind only the US, China and Canada.

Among these leading long haul markets, Europe-India seat numbers grew fastest in 2018 versus 2017, with an increase of 12.9% compared with 6.7% for the US, 10.9% for China and 7.3% for Canada, according to data from OAG Schedules Analyser.

International country markets from Europe ranked by number of seats (one way), 2018

Western Europe dominates the European end of this market

Western Europe dominates the European end of this market, accounting for 93.8% of seats in 2018, although this share has fallen a little from its peak of 96.5% in 2013. In the five years since then, seat capacity from Eastern/Central Europe to India has leapt by 132%, whereas capacity from Western Europe has grown by 26%. 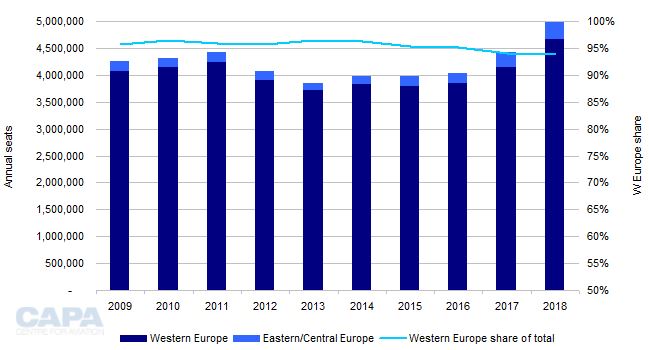 The UK is the biggest European market to India

The UK is comfortably the biggest European market by seats to India, with a 34.3% share of Europe-India seats in 2018 – almost double second-placed Germany's 17.3% share.

France, with 11.8%, and the Netherlands, with 10.5% of seats, are the only other European countries with a double digit share of seats. There are then only two more with more than 5%: Turkey has 5.8%, and Russia, the only significant Eastern European country in the market to India, has 5.3%.

Azerbaijan had the fastest growth to India in 2018

The fastest growing European market to India in 2018 was Azerbaijan, with a more than eight times increase in capacity, although it remains the smallest market.

Among the larger markets, Italy grew the fastest with a 77% increase in seats to India in 2018, while Belgium grew by 34%. Netherlands, Finland, France and Austria all generated growth of more than 20% in seat count to India.

The largest market, the UK, grew at 6.6%, which was little more than half of the average rate for Europe-India in 2018. The Russian Federation's growth was just 1%; Switzerland, Germany, and Spain were flat year-on-year, and Turkey contracted by almost 2% in seats to India in 2018. 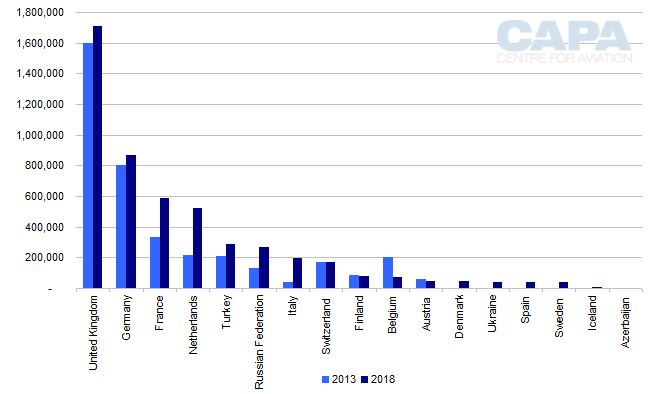 The chart below shows the 2018 seat share by airline, focusing in on the market from Western Europe to India (since Western Europe is a far bigger market to India than Eastern/Central Europe).

India's two largest international airlines had a combined seat share of 43% of the Western Europe-India market in 2018, Jet Airways with 23% and Air India with 20%, while 16 Western European airlines had 57% of seats between them.

Lufthansa and British Airways are the leading European airlines to India

Lufthansa, the leading European airline, had 16% of seats in 2018, followed by British Airways, with 13%. No other airline had a double digit share, but Turkish Airlines and Air France each had around 6%, followed by KLM and SWISS with 4% each.

Alitalia, which only entered India (Rome-Delhi) in Nov-2017, had a 2% share of Western Europe-India in 2018, matching Virgin Atlantic's share. Finnair had just below 2%, a figure matched by Brussels Airlines, which only entered in summer 2017 (Brussels-Mumbai), but which has now exited as of the end of 2018.

Leisure operators Thomas Cook Airlines and TUI Airways (formerly Thomson Airways) grew rapidly in 2018, but their combined share was below that of Brussels Airlines.

The new entrants Air Italy (Milan to Delhi and Mumbai) and WOW air (Reykjavik to Delhi) both launched India services in Dec-2018, each registering only a very small seat share for the year. 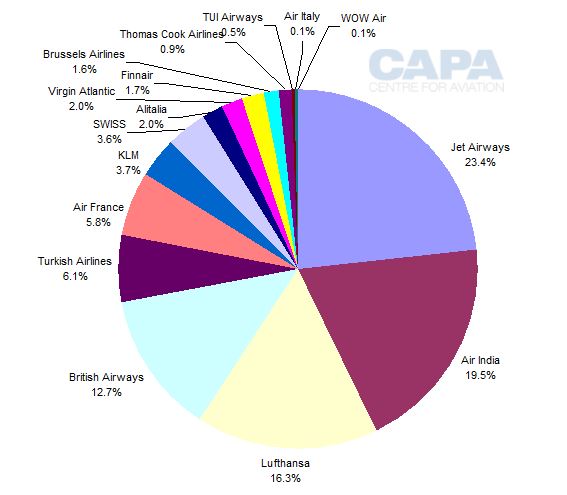 Setting aside Alitalia, whose 2018 growth rate was triple digit as it only entered late in 2017, the fastest growing airline on Western Europe-India in 2018 was the market leader Jet Airways, with seat growth of 36%. Jet grew rapidly in its three European markets UK, France and Belgium.

Air India's growth of 10% was also strong, driven mainly by expansion in Denmark and Sweden (adding to its presence in UK, Germany, France, Italy, Austria and Spain) and supported by growth in Germany and Austria, but was below the market average of 13% in 2018.

However, the leading European airlines – Lufthansa, BA and Turkish Airlines – all contracted by approximately 1%. Virgin also cut capacity to India by 2%, while SWISS and Air France were only slightly above flat.

Over the five years since the market bottomed out in 2013, four airlines have left the Western Europe-India market: Austrian Airlines, Condor, China Airlines and Delta Airlines (the latter two operated under fifth freedoms, albeit from different ends of the market).

Jet Airways' five-year growth is the result of expansion in the UK and entry into France and the Netherlands, partially offset by withdrawal from Italy and Belgium. Air India has grown in the UK and Germany, while maintaining capacity in France. It has also entered Italy, Austria, Denmark, Spain and Sweden since 2013.

By contrast with the two Indian operators, the leading European airlines have been more sedate since 2013, Lufthansa growing only by 2% pa and Air France by 3% pa, and BA shrinking by 1% pa.

SWISS, Finnair and (in particular) Virgin Atlantic have also reduced capacity over the past five years. Only KLM (8% pa) and Turkish Airlines (6% pa) have grown with any kind of dynamism over this five-year period. 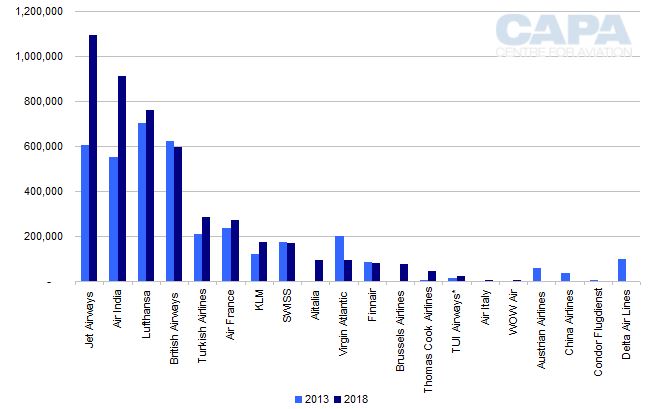 Near-term growth is likely to be driven by Indian LCCs

Indian LCCs, led by IndiGo and SpiceJet, are keen to expand their international footprints. To date, their networks have been limited to short haul routes in the Gulf and Asia, given that their largest aircraft are currently narrow bodies. However, re-engined equipment is opening up new non-stop opportunities, while IndiGo is also reportedly considering launching one-stop service to London in 2019. Both IndiGo and SpiceJet are also evaluating wide body aircraft, opening up significant route development prospects in Europe as well as North America and Asia Pacific.

With the Indian economy expected to growth at over 7% per annum for the foreseeable future, the demand for aspirational consumption such as international travel to Europe and elsewhere is strengthening fast. In a market that is also highly price sensitive, long haul low cost services could be the key to unlocking this potential.

Subject to sufficient infrastructure and appropriate bilateral loosening, the level of untapped demand and increasingly long range aircraft (including smaller widebodies) provide the conditions for rapid growth in nonstop services from Europe to India.

The CAPA India Aviation Summit will offer an invaluable opportunity to gain strategic and practical insights into the world’s fastest growing aviation market. To be held on 12-14 February, 2019 a long list of CEOs and high level speakers at the Summit will discuss: