The once prestigious Europe-Australia market continues to lose financial allure for traditional incumbents like British Airways and Qantas, as sixth freedom carriers, leveraging efficiencies and wider networks, take a wider share. China Southern is the most recent entrant, and its move to a daily offering to London Heathrow is being accompanied by AUD5000 return fares in business class, a historical low compared to more common recent prices between AUD6000 and AUD7000 (with these already below longer term pricing). This, for services of around 23 hours travel in each direction.

For now, the pressure comes most strongly via the Gulf, with its array of one-stop services to almost anywhere. But as the Chinese airlines (and other North Asian long-haul operators) adapt to the opportunities in Australia-Europe travel, the competitive balance will continue to swing.

The current pressures are forcing British Airways and Virgin Atlantic, along with even Qantas, to slash business fares as the quiet season approaches.

Traffic continues to shift to the Middle East

For some months now, traffic between Europe and Southwest Pacific (Australia and New Zealand) has been one of, or the, worst performing markets in IATA's premium traffic monitor. While this market, which recognises only through services between the two continents (and so not connecting flight options), has been impacted by the reduction in service frequency by British Airways and Qantas in late Mar-2012, the traffic decline occurred well before then. 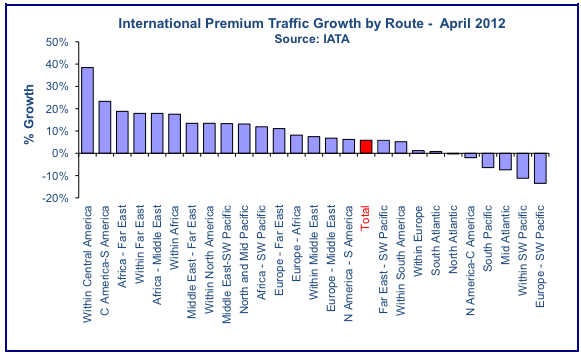 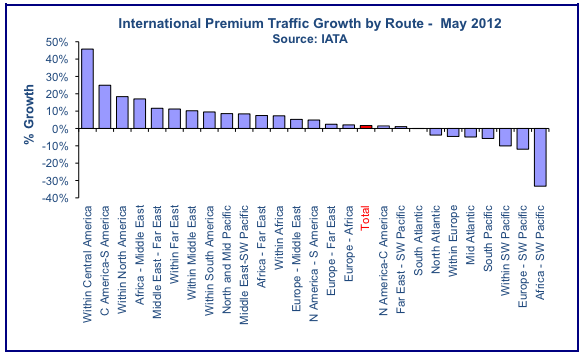 Traffic changes from Southwest Pacific to Europe and Middle East: Feb-2012 to May-2012

This reducing premium traffic makes it all but certain any future ultra-long-range aircraft will not find a home shuttling between Australia and the UK. The competitive alternatives are so extensive, and the city-pair options so much greater for sixth freedom operators that even a home based carrier like Qantas – which boasts an FFP member in almost every household in Australia – cannot hope to provide to the increasingly diverse demands of today's travellers.

China Southern in early 2012 dropped economy class fares between Europe and Australia to below AUD1000, near-unprecedented levels. Other carriers, including Air China, Air France and Qantas also dropped their prices but not as low as the AUD1000 level. It was an early sign of the enormous impact Chinese carriers (able to support services with high third and fourth freedom flows) could have on sixth freedom networks between Asia and Europe.

While China Southern has previously released discounted business class fares, its push following a Jul-2012 announcement to make its Guangzhou-London Heathrow service daily from Oct-2012 (it commenced only in Jun-2012) has been marked. The carrier today offers Sydney-London business fares in Nov-2012 as low as AUD5100 inclusive of taxes while Asiana offers fares as low as AUD5400.

Virgin Atlantic is offering fares as low as AUD5600. British Airways is selling for AUD5800 and Qantas has specials at AUD6000. Emirates – often accused of dumping capacity – is holding court at AUD8000, as perhaps another sign of a changing world.

Directional differentials are reducing in the current discount moves

International fares are typically directional, with some of the highest differences seen on Australian routes – where a strong dollar and an economy almost unaffected by the GFC – is still allowing Australians to travel the world.

Sixth freedom traffic will grow with Cathay, Emirates and SIA to expand

This shift away from end-to-end operators' services seem set to continue, with the major sixth freedom carriers serving Australia planning to expand further. 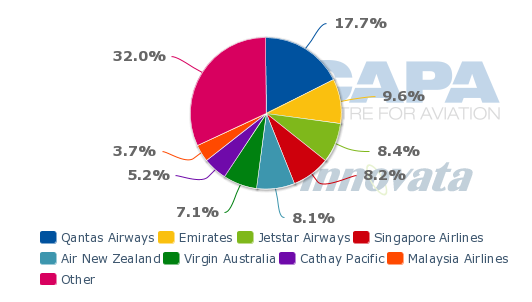 The largest foreign carrier (based on available seats), Singapore Airlines (SIA), intends to boost weekly flights this year from 102 to 112 as it adds flights in Brisbane and Perth and increases capacity on existing routes, such as upgauging a Melbourne service to A380 to offer two A380 flights per day.

Rounding out the Middle East network carriers, Qatar Airways over the long term is expected to pursue more ambitious growth than Etihad, which plans instead to rely on partner Virgin Australia to feed its network and run services to Abu Dhabi in conjunction with it. (On 19-Jul-2012 Etihad received Australian Foreign Investment Review Board approval to increase its stake in Virgin Australia's domestic operation to 10%.)

Cathay Pacific is also expected to grow once the Australia-Hong Kong bilateral agreement is expanded. Cathay currently operates nearly the maximum number of sectors permitted under the bilateral agreement. The lack of room has prevented Cathay's upcoming competitor Hong Kong Airlines from launching a Hong Kong-Sydney service. An expansion of the bilateral in the short term is likely, with additional capacity to follow.

Mainland Chinese carriers also to expand, with some bumps along the way

China Southern has taken the most aggressive expansion plan of the mainland carriers in Australia/New Zealand, wanting to have 55 weekly round-trips by 2015. Its big push came last year, but may have been too early as the carrier had to offer rock-bottom fares and, even then, make larger off-season capacity cutbacks than anticipated.

China Southern planned to operate 10 weekly flights between Guangzhou and Melbourne over northern summer 2012, after operating 14 weekly services during northern winter 2011, the peak travelling period in the region.

Instead the carrier dropped to a daily offering. Notably, the services that did not proceed as planned were daylight flights from Melbourne that connected to the carrier's evening long-haul departures to Europe and North America.

Hainan Airlines meanwhile reduced and then entirely cut its Shenzhen-Sydney service, although it intends to resume the service from Oct-2012.

But the trend is forward, a result of wanting to secure a position before other carriers gain further prominence.

Chengdu-based Sichuan Airlines has stated its intention to open a Chengdu-Melbourne service this year (it inaugurated long-haul services in Jun-2012 with a flight to Vancouver), intending to market beyond connections into Europe; and China Eastern has plans to open a three times weekly Shanghai-Cairns service from Oct-2012. The Shanghai-based airline has also applied to CAAC for three times weekly Beijing-Nanjing-Sydney services to be operated as early as Oct-2012 while Hainan has applied for four weekly Beijing-Chongqing-Sydney services to be opened as early as Jul-2013. (Chinese carriers typically apply for more services than they intend to operate.)

Meanwhile, although the Chinese carriers have woken up to it, Japanese and Korean flags have been slow to see the network potential – even if it is short term – in the Australian market.

The fact that it is worthwhile for neighbouring Cathay Pacific to operate 45,000 seats weekly (according to Innovata; SIA and Emirates each operate 75,000 seats) into Australia and New Zealand has not been enough to encourage Japan and Korea's airlines to establish user-friendly connections (on what are potentially very time-effective over-the-pole services into North America as well as Europe) and invest in a little marketing to establish themselves. All Nippon Airways, for example, has no services at all to Australia – its second international market when it first spread its wings outside Japan domestic in the late 1980s.

The strength of Virgin Australia's virtual long-haul network becomes clearer by the day, as does Qantas' need for a new direction with a new partner. Its JSA with British Airways, which now has a single daily flight into Australia, is more of the past than it is the future.

IAG CEO Willie Walsh has boldly proclaimed a Middle East network carrier will join his oneworld alliance in the short term. Qatar Airways meanwhile has announced it will join a global alliance, and with its CEO Akbar Al Baker being close to Mr Walsh, a deal seems all but done.

How Qantas reacts by choosing its future partner will affect the carrier for years to come. Qatar Airways could be a fellow oneworld carrier.

But Emirates, known more to stand alone proud than talk-up a partnership opportunity, has been unusually aggressive in pursuing Qantas. Emirates offers a wider network than Qatar, and relations between oneworld carriers – outside of anti-trust deals – are loose at best. Gone are the days of the alluring Kangaroo Route, or selecting a less than ideal partner to combat the former dilemma.

For the time being, Australia is the flavour of choice for a number of long-haul network operators. If there is a Qatar and/or Emirates link with Qantas (while Virgin Australia is partnered with Etihad and Singapore Airlines), the balance of strength will swing back to the Gulf as those airlines gain better behind-gateway access to Australia's domestic market.